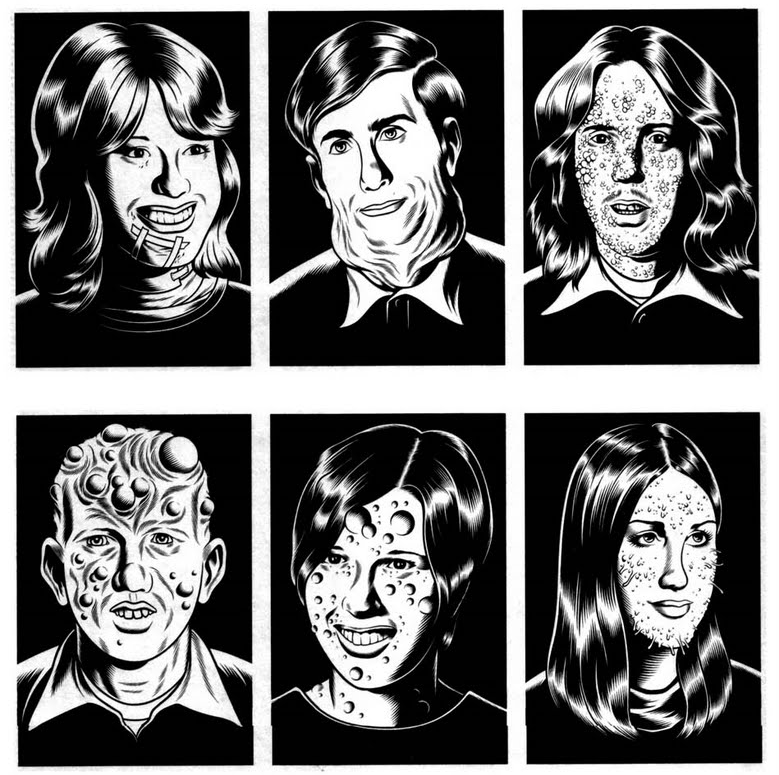 Although it has roots in Gothic fiction, body horror is most readily associated with cinema. So much so that when we discuss masters of the subgenre, the list is usually composed entirely of filmmakers. It's names like David Cronenberg, Stuart Gordon, Brian Yuzna, and most recently, Julia Ducournau. This isn't a surprise given that the term "body horror" was first used in 1983 by Phillip Brophy in an article describing a revelatory period for contemporary horror films. In many ways, film being a larger-than-life visual medium offers the perfect vessel for provocative, gut-churning explorations of the human form. As Cronenberg himself said, "You have to realize that almost all of filmmaking is [about the] body."

While cinema may be body horror's hearth, the subgenre has blossomed in a variety of mediums. More importantly, artists outside of film have significantly contributed to its influence and rise in popularity over the years, some of which are unsung yet equally deserving of being called masters. One of those people is graphic novelist Charles Burns.

Popping my Charles Burns cherry was as powerful an experience as discovering any one of those filmmakers listed above. It happened the first time I went to my university library's graphic novel section, which consisted of two shelves half-full of comics I'd never heard of before. As a kid who grew up reading superhero comics, I felt lost. Then a thick red spine looked back at me with bold white letters spelling out its title, Black Hole. I flipped through the pages to skim the interior art, and it hit me hard – the perfectionist black and white inking, the simmering dream sequences, and most of all, the mutated teenage faces carrying the weight of the world in their eyes. It was body horror, but not any kind I'd seen before. The visuals were on par with the grotesqueries of The Fly or Eraserhead, yet there was an innocence in those pages that made the book stand on its own. In many ways, discovering Black Hole set me on the path to becoming a comic book creator.

I'm not alone in Black Hole serving as a right of passage. It's influenced everyone from Kristen Stewart to It Follows' David Robert Mitchell. There have even been numerous stabs at a film adaptation with big names attached like Neil Gaiman, Alexandre Aja, David Fincher, and as of last year, Rick Famuyiwa. It remains Burns' most popular work, now sold in all major bookstores, taught in schools, and even referenced directly in Dawn of the Planet of the Apes. While Black Hole is widely regarded as his magnum opus, it is but a single work in Burns' vast yet hard-to-come-by catalog. Sadly, much of his older work remains out of print or untranslated, but if we dig into his past, it shows that Burns has been forcing readers to confront their flesh-bound selves for most of his career. 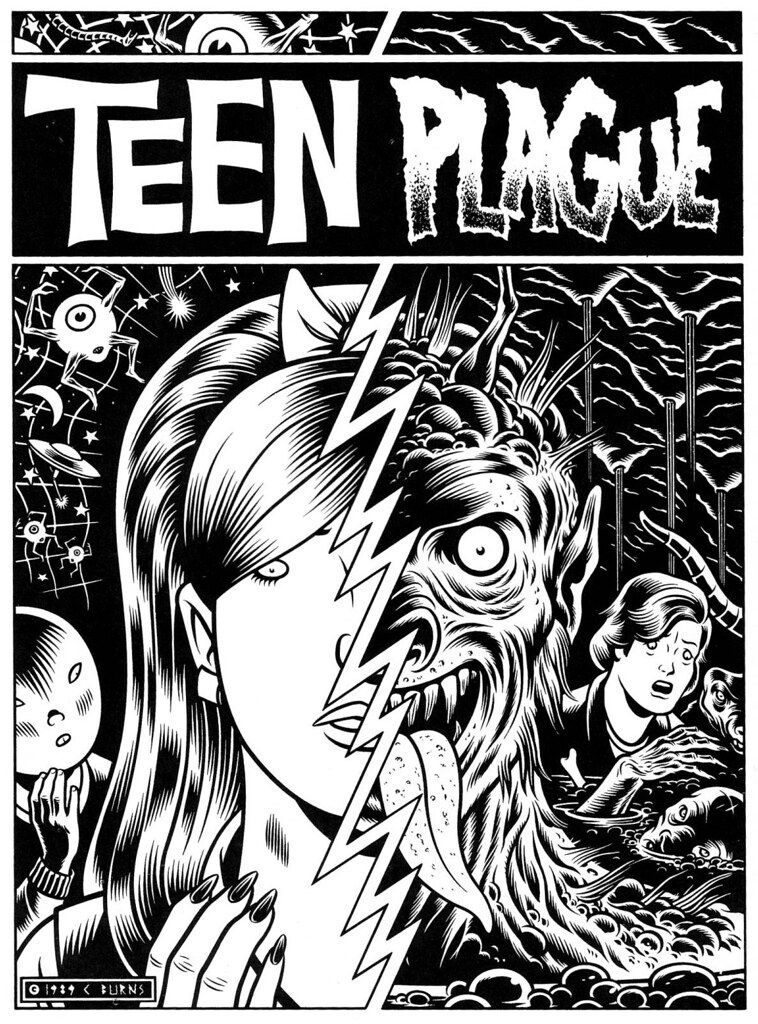 Burns came onto the alternative comics scene in the 1980s, rising to minor prominence through his work in various respected publications like BLAB!, Taboo, Heavy Metal, and Sub Pop. However, his most notable contributions were to RAW, an experimental magazine co-edited by Maus creator Art Spiegelman. Burns' output consisted mostly of short comics and illustrations at the time (even drawing the album cover for Iggy Pop's Brick by Brick), dealing with subject matter that attempted to marry his affinity for monster movies and romance comics with mid-century cynicism, and his fear of the physical world. By the '90s, he released just a few more extended collections, including Big Baby, Skin Deep, and Misterios de la Carne (all out of print at the time of writing). A mere glance at any one of those covers shows that even his earliest comics displayed a clear fascination with skewed features, the grotesque, surrealism, and sexuality.

These themes and motifs present in Burns' early work more than foreshadowed what was to come. In particular, his late '80s short comics "Contagion" from Taboo #1 and the Big Baby chapter "Teen Plague" from RAW vol. 2 #1. Both stories broach the idea of an STD spreading among teenagers, one that manifests through physical mutations. While these shorts are simple in their execution, they turn the pleasurable act of sex into a physical source of fear, drawing upon the AIDs epidemic that ran rampant through the decade. It was this same idea that Burns would explore with greater detail and maturity in his first long-form series, serialized from 1993 to 2004, the aforementioned Black Hole.

The story follows a group of suburban teenagers in the 1970s who find themselves at the mercy of a sexually transmitted disease known as "the bug," which transforms infected bodies in unpredictable and frightening ways. Some teens simply grow a tail, while others are burdened by more disturbing disfigurements such as secondary mouths or boil-like growths.

Unlike Burns' early stories, the deformations are not the source of fear in and of themselves. Instead, most of the dread comes from the social stigma that surrounds infection. One of the story's protagonists, Chris, contracts the bug after having sex with her crush at a party. Rather than making a monster of her, Burns allows the reader to feel sympathy for Chris in the following scene when her peers demean her as a result of the oncoming mutation.

While the obvious metaphor for the AIDs scare remains intact, the disease is more than a surface-level metaphor for a cultural fear. Just as the mutations vary, so does what they represent: teenage angst, unrequited love, sexual anxiety, domestic abuse, unhealed trauma, etc. As with all the best body horror, the exterior serves to represent the interior. 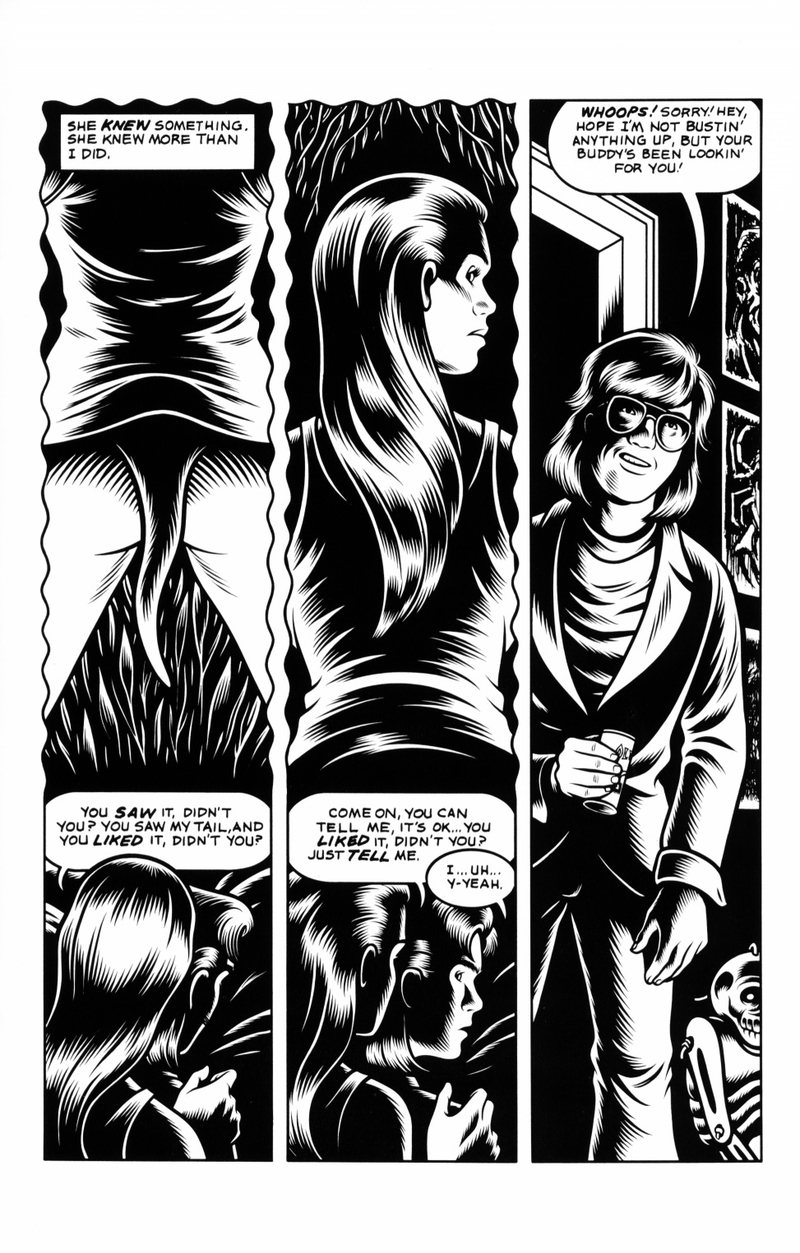 Charles Burns said in a 1992 interview, "I guess it's this fascination I have with the separation of the mind and the body. And how the body can manifest a psychological state." That fascination becomes evident in how he uses the medium to capture this interplay between mind and body. Throughout Black Hole, Burns depicts how moments of mental focus on the physical can consume us entirely, forcing us to retreat inward. Yet, these fixations can also drift away just as easily when our attention is pulled back to external reality. The characters' bodies are a source of terror only in how they impact anxieties. This is exemplified midway through the book when Chris and her boyfriend spend the day swimming, camping, and getting drunk together. There isn't a single mention of "the bug." As a result of their bodily freedom, they reach mental clarity, they are not only able to forget about their infection, to erase the fear, but even manage to enjoy themselves. It marks a transition in the narrative as characters not only come to terms with their mutations, but begin to see them as beautiful.

By the end of the book, the STD that was once the source of fear is merely one of the many experiences that define adolescence. The "infected" characters grow to have a more complex relationship with their bodies. Their skin, warts and all, becoming a physical record of their emotional trials and tribulations. 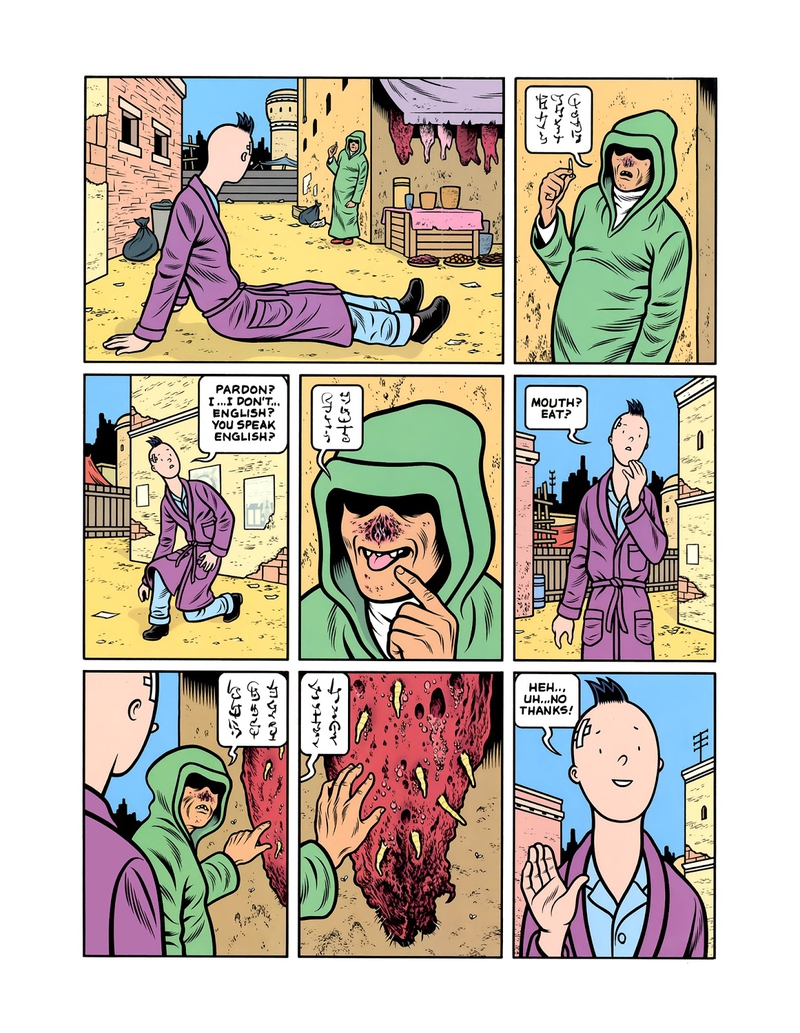 Burns pushed this obsession with the interconnection of body and mind further in his latest graphic novel, Last Look. While it's a departure from his old work, it's also a natural progression. The nonlinear narrative follows Doug, a troubled pill-popping artist, as we're given fragments of his past and present, coupled with a nightmarish dreamscape that serves as a meshing between the two. As you may have guessed, this liminal space is a sickly, fleshy, and surreal world populated by freakish versions of real-world counterparts. It's a morbid fantasy land that exists purely inside Doug's brain.

While the plot of Last Look is too winding to summarize without being reductive, what's important is that we ultimately learn the root of Doug's trauma and addiction. [Spoilers follow] He abandoned his equally troubled girlfriend years ago, just after he got her pregnant. The book reaches its surreal climax in the dream world, where the bizarro version of Doug's ex-girlfriend gives birth to giant eggs in a scene that resembles the infamous nativity nightmare in The Fly. As with Cronenberg's film, while the visual is surely uncomfortable, it's what it represents that's more horrifying. It's not simply the fear of "abnormal" birth. It's the fear that the protagonists have lost their humanity as a result of their actions. The organic nightmare world in Doug's head is a stand-in for his trauma and regrets. The grotesque is a major tenet of body horror, but with Last Look, Burns subverts expectations, showing that the grotesque is not a state of matter but a state of mind.

The ending of Last Look, so too with Black Hole and Big Baby, is ambiguous. They'd all fit in the category of non-endings, though they do not lack satisfaction. A good portion of classic body horror movies end with the protagonist self-destructing. Seth Brundle, Max Renn, and Frank Cotton all succumb to the flesh. And if the characters don't die, there's usually an implication of impending doom for the rest of us as the unwell are suddenly let loose upon the world. In Burns' work, on the other hand, there is never a solution presented. There is no cure. There is no death. Instead, there is a vague acquiescence, a sense that the world and the characters will continue on, continue shifting, continually evolving. 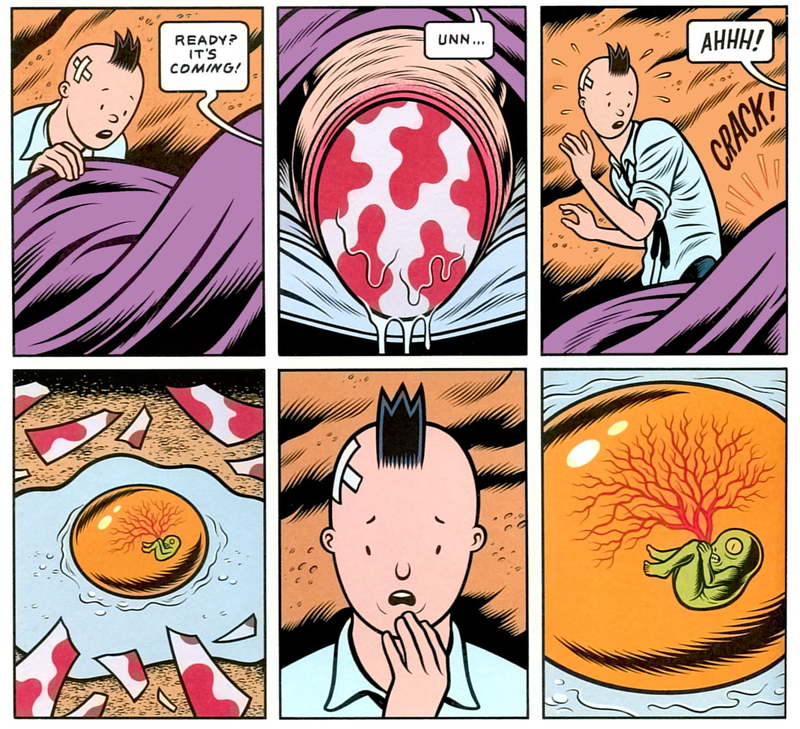 While some of the cinematic masters of the subgenre approach the body with a sense of sympathy, Burns is unique in that he always prioritizes empathy over disgust. In his oeuvre, body horror is not simply a means of creating discomfort or presenting repulsive visuals for the sake of transgression. Deformities, mutations, growths, and the unreal are never scary because they are different. There is equal importance placed on the wonders of physical and sexual anomalies. This is because he's not only concerned with biology, but equally with psychology. The true genius of Burns' work comes from the fact that he's exploring this mind/body duality in the comic book medium, which is fundamentally built on dichotomy, that of text and image. If we are to take Cronenberg's statement as true, that most cinema is about the body, then Burns is playing at something similar in comics. Through the marriage of art and word, he fluidly shifts between mental and physical spaces, which are in a constant struggle. Thus, horror and pleasure derive not from one or the other, but rather from the push and pull between the two.

Burns' brand of horror is so affecting, so masterful, precisely because he delivers in-depth explorations of two things we've all got in common: brains and bodies.

For starters, click here to dive into the Black Hole.