Exploring the fear of holes. 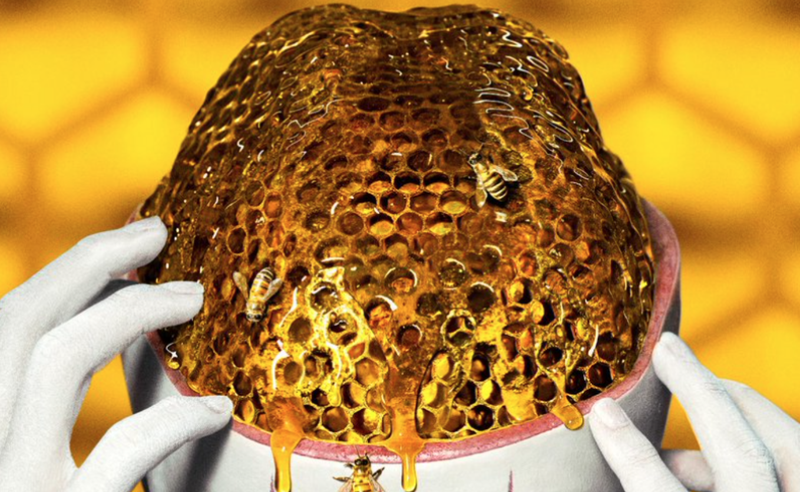 “The most common phobia you’ve never heard of,” boasts the heading at r/trypophobia and since we at FANGORIA love practicing exposure therapy for the anxieties that plague us, it’s only fitting we take a good long look at the fear of holes. A phenomenon first identified through mid-aughts online message boards, trypophobia is reported by folks who experience feelings of repulsion, disgust, and sometimes fear at the sight of clusters of holes. The most commonly reported visual triggers include strawberries, honeycombs, lotus flower pods, certain types of drains and species of coral, sponges, the bubbles on the underside of an uncooked pancake, and patterns like polka dots. In its most extreme forms, large pores and certain types of skin lesions can also activate those with this particular sensitivity.

While one cannot formally be diagnosed with trypophobia at present, and research is in its infancy (the term was coined by an unknown forum user in 2005), the general theory is that these physiological responses serve an evolutionary purpose. A piece from Healthline published earlier this year reports that “some experts theorize this fear of closely-packed holes may develop as an extension of a biological fear of venomous or otherwise dangerous creatures,” while others support the argument made in this 2014 article from Scientific American which considers that the “‘fear of holes’ may be…an evolved trait that may have helped our ancestors avoid germs and disease.”

Personally speaking, I find neither explanation particularly satisfying. First, because they indulge the tendency of evolutionary psychologists to retroactively devise convenient, tidy narratives surrounding human evolution and experience that are, in actuality, messy, complex, and deeply bound up in/with culture. An inclination the paleontologist and evolutionist, Stephen Jay Gould denounced in the late ‘70’s as an impulse toward the “just so stories” designed for children in the early twentieth century. To this point, neither theory speaks to the fact that holes are an ancient, universal motif- employed across cultures, continents, and spacetime- to signify and incite fear, anxiety, and repulsion specifically. This is, in part, what The Swallowing is all about.

A hole is a measurable absence, a simultaneous emptiness and openness. It is an eye, a wound, an orifice, a cave, a well, a door, a grave, and most significantly, a mouth. Christian Anglo-Saxon art as far back as the first century AD has depicted the entrance to hell as the open mouth of a serpentine monster (the Hellmouth, for the Buffy fans out there), a motif that has appeared again and again over time in ever-evolving forms. The Leviathan becomes Moby Dick becomes Jaws.

These occurrences ultimately echo one another, pieces that come together to form an ontological whole. The metaphor of the “sweet smell” that lures fish into the whale’s open mouth in the Old English poem, The Whale (from which the Leviathan derives, though the monster is named Fastitocalon, an embodiment of the Devil), is mirrored in our contemporary interpretation of the soundwaves emitted by/from the black hole at the center of the Perseus galaxy as song. You need only watch Event Horizon to understand such singing as its own lure, its own “sweet smell.”

Though trypophobia literally translates to “fear of holes,” its popular usage has explicitly referred to clusters and patterns of holes. This entire column is a testament to the prevalence of devouring mouth-holes in horror, but what has quickly been identified as “trypophobic imagery” was prevalent long before the term was actually coined. Jason’s mask in the Friday the 13th franchise would be a nightmare unto itself to someone with trypophobia, and if Freddy’s burned face didn’t do you in, the needle-fingers scene in A Nightmare on Elm Street 3: Dream Warriors- in which clusters of burn holes appear on Taryn’s arms- is gross enough to earn at least a shiver of disgust from most. Larry Cohen’s The Stuff (which I wrote about earlier this year) also features some notoriously trypophobic elements, namely in one of the film’s most unforgettable scenes.

The moment is a reveal, one where we discover a particular character has been taken over by The Stuff, a body-snatching sentient marshmallow fluff-like goo. It stretches and expands from inside their body but their mouth in particular, which widens and widens to allow The Stuff to “vacate the premises” (through the front door) until it basically tears them apart. Before this crescendo, clusters of holey lesions fill the mouth as though the skin were an old, well-worn t-shirt. But, you know, one that oozes. 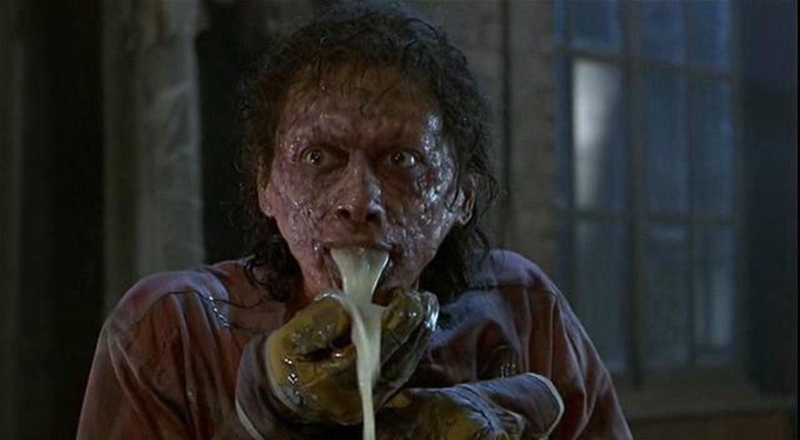 Seth Brundle’s grotesque transformation in The Fly makes another common example, as well as several scenes in Candyman (1992), most notably the bees that teem in the toilet and then in Candyman’s mouth. Such visuals are primarily designed to signify the abjection of decay, and to this end, the repulsion folks report is most in keeping with the evolutionary hypotheses attributed to trypophobia. Repulsion is a physiological rejection, an anxiety of trespass, of contamination—something we’ve all experienced in different ways, which is precisely what makes it such a convenient explanation. But what about, for instance, Pinhead, whose aestheticization is undoubtedly discomfiting to some but not exactly what you’d call gross or abject, namely because it’s also quite beautiful? And what of the suit featured in 2020’s The Invisible Man, the design of which has been reported to trigger the trypophobic anxieties of certain viewers?

These iterations are, I think, closest to the irrational disgust people feel at the sight of lotus flower pods. There’s something gross and inarticulable about them that, to me, conjures comparisons to the maddened awe the many eyes of a biblical angel are purported to inspire. As Nietzsche said, “if you gaze into the abyss, the abyss gazes also into you.” This is to say; consumption starts first in the eyes.

While a litany of horror projects have been produced since the condition was named in 2005 that specifically seek to incite trypophobic repulsion in their audience, none have accomplished this so thoroughly as American Horror Story: Cult and Candyman (2021). 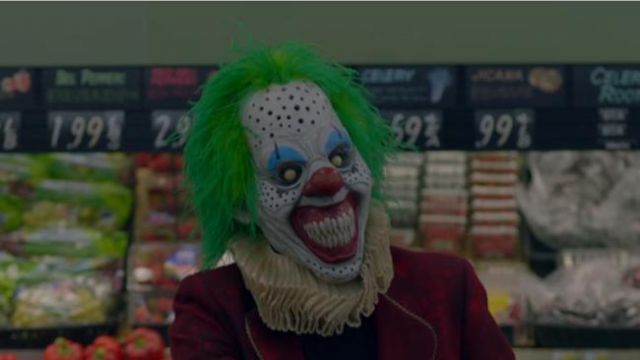 Trypophobic imagery is littered throughout this particular season of AHS, and though the first episode takes care to specifically name Ally’s (Sarah Paulson) trypophobia as one of the slew of irrational fears she struggles to manage, it’s episode 5, aptly titled “Holes,” that really excavates the metaphor of it all. During a session with therapist Dr. Vincent (Cheyenne Jackson), he describes her trypophobia as not “simply a biological revulsion” but “deeply rooted in [Ally’s] subconscious.” He tells her that she’s “afraid of falling into the darkness of [her] life,” equating her fear of holes with the fear of confronting the decay in her marriage, her self-image, sanity, logic, and choice-making. A hole is an absence: a simultaneous emptiness and openness. But in her despair, it’s the emptiness that gnaws at Ally. Later in the episode, she’s confronted with a hole that holds the answers she desperately seeks. The question is whether or not she can gaze into that abyss and accept what gazes back.

Honeycombs are also one of the heavily relied upon trypophobic visual motifs in AHS: Cult and are in good use. Billy Eichner’s character, Wilson, is a beekeeper who relishes the efficiency and effectiveness of hive behavior, where individualism is obliterated entirely in service of a shared goal. This is, of course, a metaphor for the “hivemind” demonstrated by cults, which enacts the precise type of psychic consumption I described in last month’s column. But Cult isn’t the only recent project to intentionally utilize bees and honeycomb as trypophobic visual imagery. 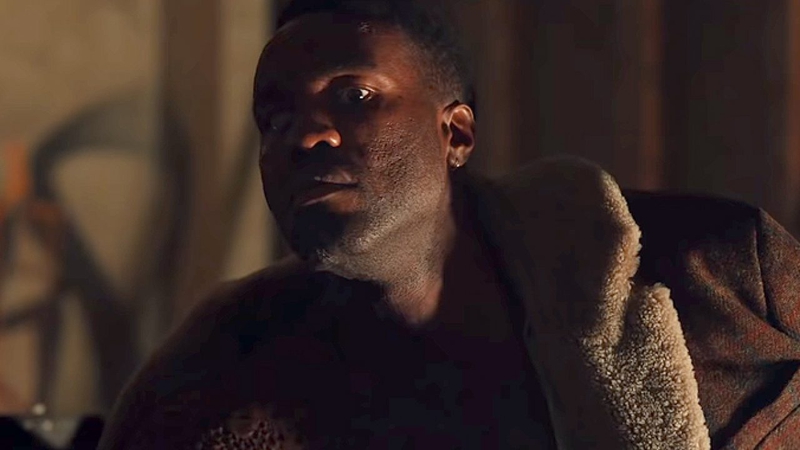 The honeycomb skin that signals the final stages of Anthony’s (Yahya Abdul-Mateen II) completed transformation into Candyman was also designed to be repulsive to certain audience members. Throughout his transformation, what starts as a bee sting gradually spreads, causing holes and blisters to rupture from his skin. As we learn in Bernard Rose’s earlier 1992 film, stolen honeycomb played a significant role in the lynching and torture of Todd’s Daniel Robitaille. It was only appropriate then that the symbology of this horrific backstory be conjured in the contemporary Candyman’s final design.

In an interview with Bloody Disgusting’s Meagan Navarro, Special Makeup Effects Designer, J. Anthony Kosar overtly states as much: “I knew that this was going to trigger people to the extreme because we’re doing it to such a big magnitude that almost half his upper torso and face are filled with these honeycomb-shaped holes…. So, we were anticipating that it was going to have a pretty gruesome effect.”

Though the question of what causes trypophobia is fundamentally unanswerable, like so many other questions, the use of holes to trigger feelings and association of fear and disgust is overwhelmingly evident through both horror and world history. Giving language to these anxieties only ensures we’ll see more of their intentional usage in the future.