Be(ware) The Swallowing: Goo Is Gonna Get You In The Blob And The Stuff

The sticky history of slime horror. 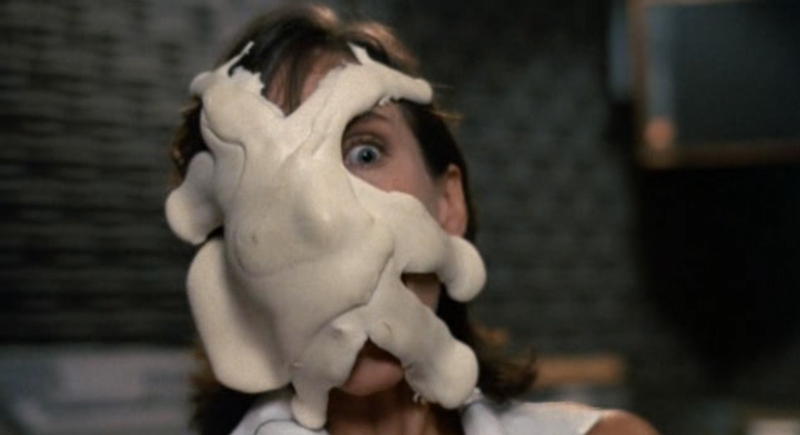 Ruminating on “the slimy” in Being and Nothingness, Jean-Paul Sartre declares, “What [the slimy] teaches me about the world, that it is like a leech sucking me.” It’s an image he returns to repeatedly: the leech, the parasite. What you come into contact with and can’t shake off. It’s an easy detail to take for granted, that goo is a well-worn aesthetic feature of the monstrous. Neither solid nor liquid, its tactile existence is that of the sticky in-between, and so the surest way to conjure repulsion in an audience is to make something ooze and zoom all the way in. For this reason, it’s also among the most essential forms of abjection, Julia Kristeva’s term for “the place where meaning collapses,” though she theorizes this repulsion to be deeper than tactile discomfort.

An unpleasant truth: the meat suits we inhabit are, in effect, a system of sentient goo held together by a single sheet of tissue (which is really to say we’re basically held together by organic, compostable saran wrap), and this state does not end with cadaverhood. Like all organisms, we break down, and as we break down, we become what we always were underneath it all: slime.

Kristeva, therefore, theorizes that our disgust bubbles up in the face of abject goo because it trespasses the borders of “the clean and proper body” per Lacan’s symbolic order. She writes, “These body fluids, this defilement, this shit are what life withstands, hardly and with difficulty, on the part of death. There, I am at the border of my condition as a living being.” Slime, ooze, sludge. It all embodies decay and so the idea is that our repulsion stems from the urge to save ourselves from its contamination; that when we scrunch up our faces and turn away in offense, that this is an act of self-preservation against that which “beckons to us and ends up engulfing us”...which is to say, The Swallowing. What pure observation of the symbolism ignores, however, is its interaction with power.

I want to be clear that these ideas, ideologically-speaking, represent the crux of replacement theory, wherein Blackness, Indigeneity, disability, queerness, or any other marker of Otherness is coded as the abject corruption perceived to threaten the sanctified white Christian body politic, and by extension, “the clean and proper” world. It also happens to be the subtext of a truly untold number of horror films, wherein (white, human) blood purity is symbolically coded to indicate moral purity.

Consider the slimy Gill Man of Creature From the Black Lagoon. Or John Carpenter’s Prince of Darkness, where a sentient green goo is rendered the embodiment not merely of Satan, but Anti-God (illustrated by its composition as anti-matter). 1988’s Slime City depicts New York as a breeding ground of immoral slime creatures, while Walter Salles’s 2005 American remake of Dark Water features a haunting expressed as a mysterious leak that oozes black sludge. Relic (2020) uses black mold to signify bodily and mental deterioration, while Little Marvin’s Them- in a subversion of Catherine Perkins Gilman’s “The Yellow Wallpaper”- also uses black mold to reveal the manic racism of its villainous Karen character, Betty Wendell. The interactions between abjection, b/Blackness, and ecophobia are demonstrated repeatedly in the symbolic antagonism of slime. Meanwhile, projects like Godzilla vs. Hedorah and Spirited Away use sludge monsters to exhibit how overconsumption and industrial waste damage and defile the natural world. 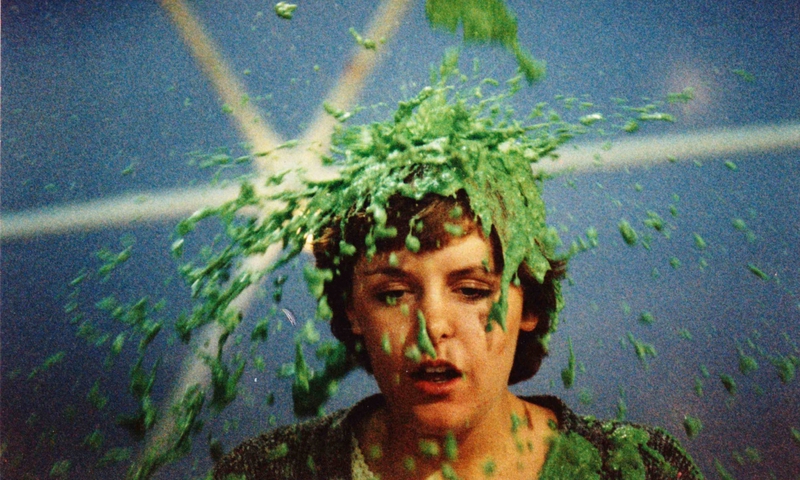 Despite these heady considerations, slime also happens to be a mainstay of gateway horror, from Ghostbusters to Goosebumps. Then there’s Nickelodeon. Since 1979’s You Can’t Do That on Television, “sliming” has become the network’s figurative signature, and what that signature can be reduced to is a sort of abjectifying of media’s general shininess. Where else do you see celebrities like Beyonce, Snoop Dogg, Halle Berry, Will Smith, Harrison Ford, Heidi Klum, or Katy Perry putrefied in such spectacular manner, and with good humor at that! What Nickelodeon has so thoroughly illustrated over the decades is the jouissance of slime: the pleasure and play inspired when we revel in the gross.

That horror inspires this as well is part of what makes the genre so inherently transgressive (though standards and definitions of what constitutes transgression certainly differ). Part of the brilliance of The Fly is that it manages to make its absolutely repugnant exhibition of the gore involved in the act of becoming, utterly romantic. Alien, Gremlins, and The Brood all feature slime-covered gooey sacs (cocoons) from which new monsters- new life- emerge. The scene in The Descent when Sarah resurfaces from the pool of blood-sludge is positively baptismal in nature, ultimately meant to signify her rebirth.

As far as monstrous metaphors go, it’s gross and primordial and particularly potent in its capacity to legitimize and direct real-life violence. But like the condition of goo itself, the metaphor is malleable, and no two pieces of slime horror evidence this malleability more so side by side than The Blob and its sweetened progeny, Larry Cohen’s The Stuff. 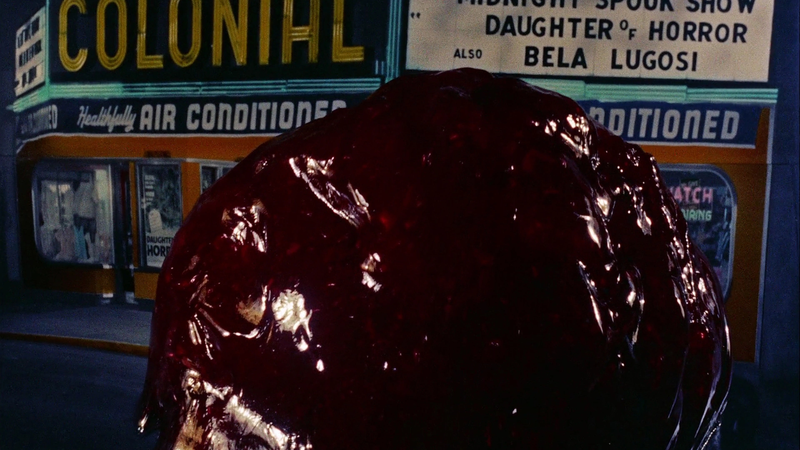 A classic of post-war ’50s sci-fi horror, The Blob features a red, jelly-like alien substance that wreaks havoc on unsuspecting Downington, Pennsylvania. Steve McQueen stars in his breakout role as lothario, Steve, who witnesses a meteorite crash nearby while on a date with the wistful Jane. Shortly thereafter, the couple encounters a hysterical old man waving a hand covered in what Steve initially thinks is a massive blister but turns out to be the carnivorous Blob. When it devours the old man and the town physicians, Steve and Jane set out to sound the alarm but are promptly dismissed by the adult powers that be (primarily the police and their parents). That is, until the Blob gets so big- so consuming- it can simply no longer be ignored.

As a manifestation of The Swallowing, there are a number of ways to interpret the Blob itself. It takes after The Thing From Another World (1951) in rendering the goo-monster alien—which is to say, innately foreign and therefore threatening to the human Subjects. But it also reflects much of the same atomic age anxieties of the decade’s other sci-fi-horror like Gojira (1954), Creature From the Black Lagoon (1954), Them! (1954), It Came From Beneath The Sea (1955), and The Wasp Woman (1959), all of which locate terror in the infinite unknownness of the universe, the natural world, and humanity’s own annihilating potential. 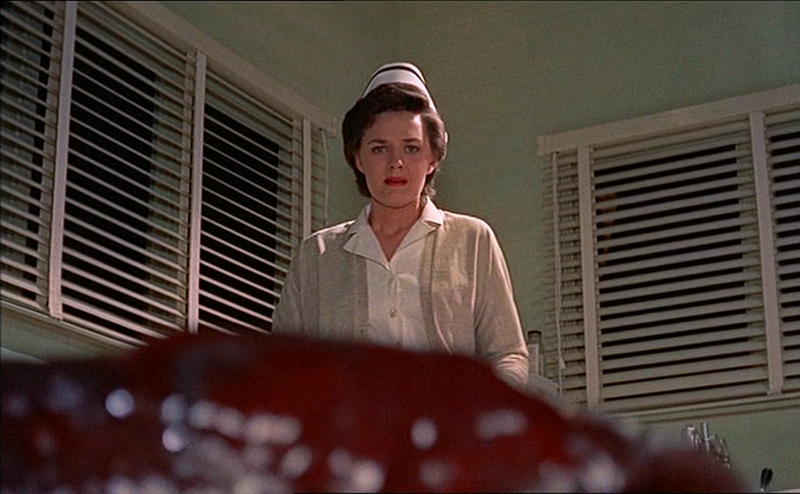 The Blob was released at the tail end of the second Red Scare, during a decade that saw America update but still double down on its national mythologies. If we accept monsters to be mirrors of the cultures that produce them, the monster movies of the ’50s illustrate attempts to grapple with the aftermath of the Second World War’s horrific realities in conjunction with rising Cold War tension. Consider thus, the Blob’s aestheticization. It is a distinctly red, distinctly alien cancer-like mass that devours everything in its path and threatens the hallowed idyll of white small-town America. It does more than mirror the anti-communist paranoia of the period; the Blob is the faceless, shapeless embodiment of the Red Scare itself.

That this was also the heyday of Hollywood censorship is not without relevance. Produced under the Production Code’s strict guidelines that “the audience feels sure that evil is wrong, and good is right,” the film’s predetermined narrative structure demonstrates the feedback loop that is the technology of monsters at work. The monstrous Blob, as this particular manifestation of “evil,” is both the source and byproduct of paranoid rhetoric and the worldview it produces and reproduces, until the paranoia itself becomes the same consumptive entity it first projected into the world.

The Blob is far from Frankenstein’s Creature. It cannot and does not inspire sympathy for how completely dehumanized it is in form. Red Scare propaganda painted a picture of communism infecting the nation (much in the same way colonialism actually did), and from this designation of social monstrosity came a movie monster to propagate these anxieties across generations. The Blob’s uniqueness as a rendering of The Swallowing is also what made it uniquely terrifying to many: there’s no possible way to relate to it, and there’s no possible way to escape it. The sole purpose of its being is to ensure its own expansion. 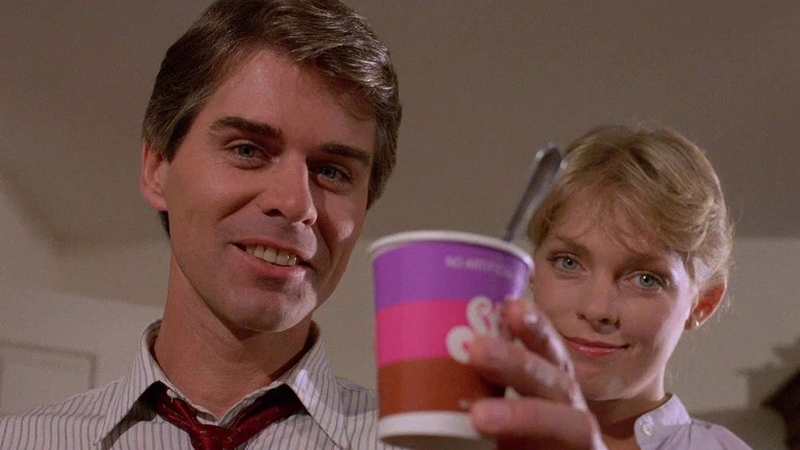 The B-movie lovechild of The Blob, Invasion of the Body Snatchers, The Thing, and Night of the Living Dead, Larry Cohen’s The Stuff is the precise type of delightfully unhinged ’80s horror that deserves a remake with a legitimate budget. The stuff in The Stuff can perhaps most accurately be described as a marshmallow fluff-like substance found bubbling up from beneath the snow in some northern quarry. At the speed of capitalism, the stuff- discovered to be sweet- is packaged, mass-distributed, and mass-marketed as a “healthy,” calorie-free, nutritious dessert that quickly has consumers addicted—and quite literally so. The stuff is not only sentient, but parasitic host-like (remember Sartre). It takes possession of consumers’ minds and bodies, driving them to do the stuff’s bidding, summed up by two objectives: produce more stuff and produce more zombified slaves.

It’s not just the fact that their monsters are both sentient goo that makes The Blob and The Stuff such a great double feature, but their oppositional politics. If The Blob renders communism a devouring entity, The Stuff turns that gaze to capitalism’s own devouring impulse. And not just capitalism—white capitalism. The aestheticization of the stuff as both sweet and white as snow contrasts the Blob’s pulsating redness, subverting the standard symbolism wherein white is associated with goodness and purity. Here, its milky sweetness ultimately masks its deadliness. 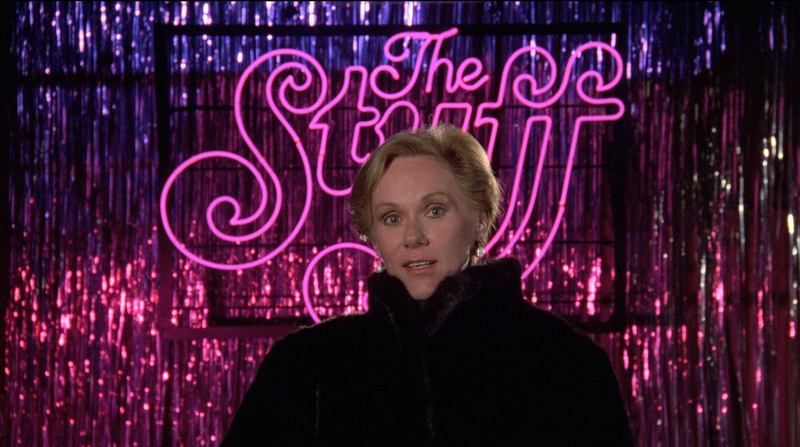 The heroes of these stories also couldn’t be further from one another. Steve is an All-American Hometown Hero, but in The Stuff, that role is designated to corporate saboteur, David “Mo’” Rutherford, hired by the suffering ice cream industry to investigate the contents of the mysterious substance. This is not to stop the stuff, but so they might legally develop their own version. His employers have no real care for its impact on consumers other than the fact that it hurts their bottom line. Pause a moment over the histories of any industry- sugar, tobacco, cotton, oil, garment/fashion, beauty, cars, coal, pharmacology, and so on- and the parallels will reveal themselves to be undeniable.

In The Blob, the Red Menace is stopped by the brave townspeople, and the threat is conveniently relocated to an icy hellscape so that everyone may live happily ever after. The Stuff takes a very different approach. While the world is alerted to its addictive nature, attempts to suppress the stuff only drive the market underground, and those still enslaved to its influence are rendered social monsters. The parallels with the crack- and now, opioid- epidemics are painfully clear, but it also demonstrates how capitalism first creates addiction, exploits, then stigmatizes it.

While technically far from perfect- and to say nothing of the horrifying interracial dynamics it features, an essay unto itself- the portrait of capitalism painted in The Stuff remains painstakingly relevant today, the complexity of which can be reduced to a single question: “Are you eating it, or is it eating you?”