Our final look back at some Chainsaw highlights from the past. 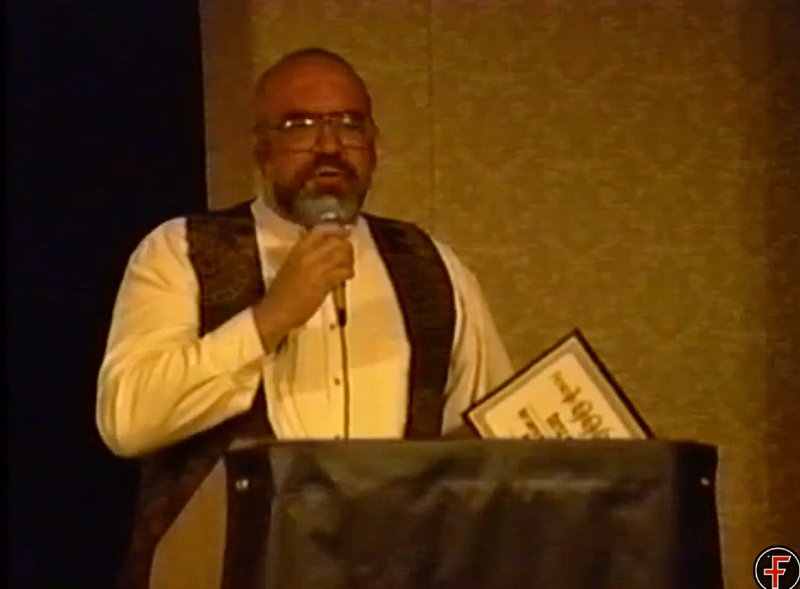 Stuart Gordon accepting his Chainsaw Award at the 1996 ceremony.

Editor's note: The 2021 Chainsaw Awards aired last night on Shudder, and Michael's been walking us through past award ceremony highlights. Check out his write-ups of the 1992 Awards, 1993 Awards, Part One and Part Two of the 1994 Awards and 1995 Awards, and stay tuned later today for his recap of last night's ceremony. You can watch it and read our list of winners HERE.

The last of our live Chainsaw Awards convention presentations took place June 29, 1996 at our Los Angeles Weekend of Horrors show, celebrating the wide range of fright fare released the previous year. Actor/comedians Rick Overton and Scott LaRose made their second turns as hosts, once again cracking the audience up with routines based on both new and classic genre fare, including a takedown of the ’95 actioner Mortal Kombat.

Lord of Illusions composer Simon Boswell called back to that bit when he accepted his award for Best Soundtrack, presented by Independence Day composer David Arnold.

The Chainsaws spread the wealth this year, with the nine awards divided among five films. Tales from the Crypt: Demon Knight took Best Actress for Jada Pinkett, who wasn’t able to attend, but Todd Masters was on hand to claim his Best Makeup FX prize for Tales (shared with Kevin Yagher). Presenting this one was special makeup artist Chris Nelson, who came with his own cheering section.

The biggest winner of the night was the serial-killer smash Se7en, which was named Best Wide-Release Film and also claimed Best Screenplay (Andrew Kevin Walker) and Best Supporting Actor (Kevin Spacey). The killer-angels thriller The Prophecy won Best Supporting Actress (Virginia Madsen) and Best Actor for Christopher Walken, who was also inducted into the FANGORIA Hall of Fame along with Christopher Lee. The only other winner who made the scene, however, was Stuart Gordon, winner of Best Limited-Release/Direct-to-Video Film for Castle Freak, presented by William Lustig.

Ironically, the Chainsaw shows were discontinued at our conventions just as horror was about to make its big comeback, starting with the December 1996 release of Scream. But the Awards have lived on to this day, and as long as horror continues to thrive and showcase great filmmaking and performances, the Chainsaws will be here to honor them.