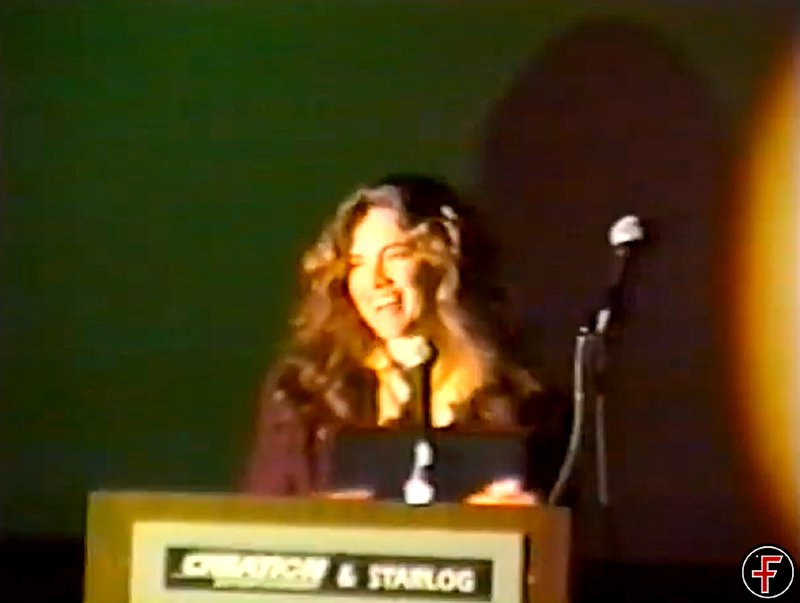 Heather Langenkamp accepting her award at the 1995 ceremony.

Horror went big in 1994, with major stars delivering new takes on classic movie monsters. Yet it was fan favorites in somewhat smaller films who largely triumphed the following year at the fourth annual FANGORIA Chainsaw Awards, which took place May 6, 1995 at the Los Angeles Weekend of Horrors convention. Interview With the Vampire, Mary Shelley’s Frankenstein and Wolf all received multiple nominations, but only one scored significantly when the victors were revealed.

Hosting this year were actor/comedians Rick Overton and Scott LaRose, who had the audience roaring with sometimes raunchy jokes and a number of impressions, including comedic variations on favorite horror characters. These included Dustin Hoffman as Rain Monster, Fred Sanford Krueger (“Keep it up and you’re gonna get four o’ these, you big dummy!”) and, inspired by Robert De Niro’s turn in the new Frankenstein, the duo enacting De Niro and Joe Pesci in DeadFellas.

Interview With the Vampire claimed a pair of early trophies, Kirsten Dunst and Antonio Banderas for Best Supporting Actress and Actor; neither was on hand, though Dunst sent a brief but heartfelt acceptance speech. (Later in the show, Interview’s Stan Winston was named the winner of Best Makeup FX, and sent a speech as well: “My work was an exciting challenge, and I’m thrilled to death – no pun intended – that you have chosen me.”) Then Tales from the Crypt: Demon Knight screenwriter Cyrus Voris presented Best Screenplay, which went to Wes Craven (the clear choice among the fans in attendance) for his New Nightmare.

The Best Actor category was especially packed with heavy hitters, among them Interview’s Tom Cruise, Frankenstein’s De Niro and Wolf’s Jack Nicholson. Yet it was the late Brandon Lee who won for his unforgettable starring turn in The Crow, with the film’s scripter David J. Schow accepting on his behalf.

Schow also accepted the Best Wide-Release Film prize for The Crow in absent director Alex Proyas’ stead; the movie additionally nabbed Best Soundtrack (Graeme Revell). Unfortunately, technical issues with the video prevent us from sharing footage of that speech and a couple of the night’s other winners, including Don Coscarelli of Phantasm III, which won Best Limited-Release/Direct-to-Video Film, and Langenkamp’s return to the stage when she, along with Peter Cushing, were named as the newest inductees to the FANGORIA Hall of Fame. But a great time was had by all on that night, which proved that horror and humor can indeed mix well.