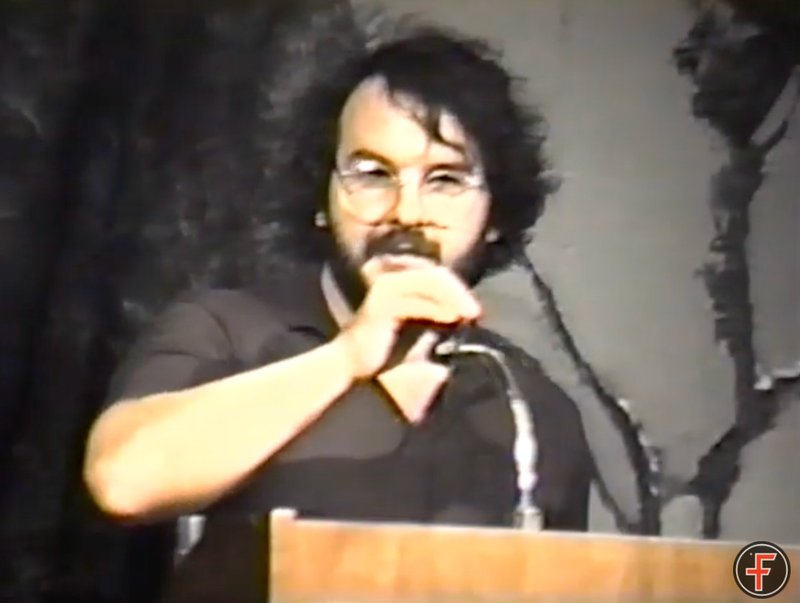 Peter Jackson accepting his award at the 1994 ceremony.

Sam Raimi and Bruce Campbell weren’t the only serious FANGORIA favorites to be honored at the third annual Chainsaw Awards, held June 11, ’94 at the Los Angeles Weekend of Horrors convention (see our first flashback here). Another was Peter Jackson, whose epic gore- and laugh-fest Dead Alive, a.k.a. Braindead, was chosen by our readers as Best Limited-Release/Direct-to-Video Film. Since Jackson was based on the other side of the world in New Zealand, he initially sent an acceptance video to be played during the ceremony, with a couple of special guests.

Then, not long before the convention, came the good news: Jackson, who was then in talks with Miramax about Heavenly Creatures, had moved some LA meetings up by a week so he could be in town to attend the Chainsaws personally. It was a special thrill to check into the convention hotel – the LAX Hilton and Towers – and learn I had a message from Jackson, and the audience was equally excited when he took the stage to accept his award from presenter/filmmaker C. Courtney Joyner.

And this wasn’t Jackson’s only honor of the night: He was also inducted into the FANGORIA Hall of Fame, along with Phantasm phave Angus Scrimm. The Tall Man’s regular co-star Reggie Bannister did a lovely job of introducing both men.