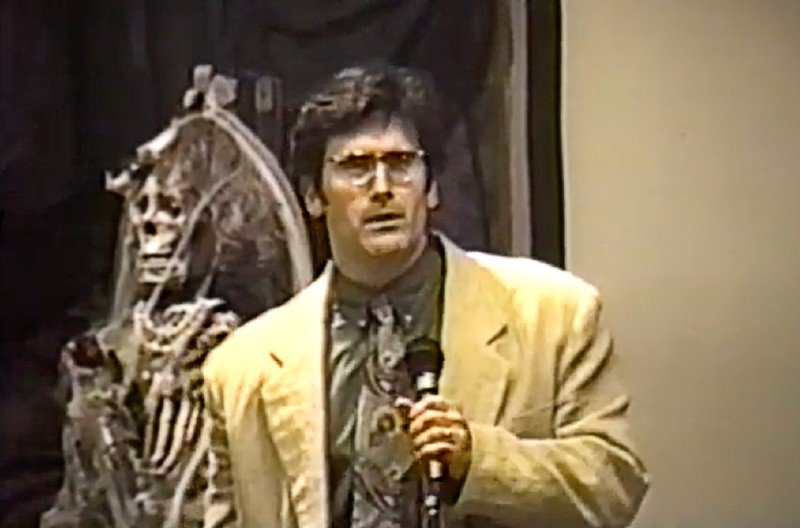 When it came time to stage the First Annual FANGORIA Chainsaw Awards, which took place May 16, 1992, at Fango and Creation Entertainment’s Weekend of Horrors convention in Los Angeles, CA, there was really only one choice to host: Bruce Campbell, the man who found so many creative uses for chainsaws in the Evil Dead trilogy. Bruce emceed both the first and second Chainsaw Awards ceremonies, bringing his crowd-pleasing, sardonic humor to the gig, to the delight of the audience.

When it came time for the presentation of ’92’s Best Independent/Low-Budget Film award, Campbell was joined on stage by compatriots Sam Raimi and Rob Tapert, who amused the crowd with more banter before the winner, Bride of Re-Animator, was revealed, and director Brian Yuzna took the stage to accept.

None of the winners for the year’s big victor, The Silence of the Lambs, were able to attend the Chainsaw Awards, but they all graciously sent acceptance speeches…

Jonathan Demme (Best Studio/Big-Budget Film): "When you elect to make a scary picture, it’s its own kind of terrifying experience. What if you wind up with a yawn? But Silence of the Lambs has won FANGORIA’s and Roger Corman’s approval. Seems like we did it! Thank you on behalf of all the makers of the film."

Anthony Hopkins (Best Actor): "It’s always nice to win an award, so I am pleased to know I can now add a Chainsaw Award to the list! I’m sorry I can’t be there in person; I’m doing a film in Germany, playing a reasonably sane, American 'nice guy' (a bit of a stretch!). Thank you FANGORIA and all your readers."

Jodie Foster (Best Actress): "I am truly honored to have been chosen as FANGORIA’s Best Actress. I don’t think any of us ever imagined that The Silence of the Lambs would cause quite this big a stir. And we certainly never dreamed of winning applause from the horror genre fans out there. For someone who really loves movies like myself, who loves to be thrilled and chilled and sent to strange and fantastical places while sitting in my aisle seat, it’s the biggest thrill of all to win recognition from real movie buffs – mostly because you guys feel the same way about movies that I do. I wish I could be there to accept this award, but instead, I send my deepest thanks and a traditional high-pitched horror movie scream your way."

Ted Tally (Best Screenplay): "Though I’ve been fortunate enough to win many awards for The Silence of the Lambs, this is the very first to be named in honor of a gasoline-powered deforestation and carpentry tool, and it will occupy a proud place in my workshop or trophy den. Thanks, as always, to Tom Harris for his superbly intelligent and scary novel, and to Jonathan Demme and the entire Silence family for their great work. And thanks especially to FANGORIA and its readers for this honor, and for your generous and enthusiastic support of our movie. Over a very faint long-distance connection, the Doctor himself has asked me to add his own appreciation, and to say that he intends to thank each of you personally, in his own unique way, during the coming year."

Other winners were Brad Dourif, Best Supporting Actor for Body Parts; Christina Ricci, Best Supporting Actress for The Addams Family; and Stan Winston and Brad Fiedel, Best Makeup FX and Best Soundtrack respectively for Terminator 2: Judgment Day. And the two inductees to the FANGORIA Hall of Fame were Lance Henriksen and Jeffrey Combs, both on hand to be welcomed to the fold by a director they had each collaborated with: Stuart Gordon.