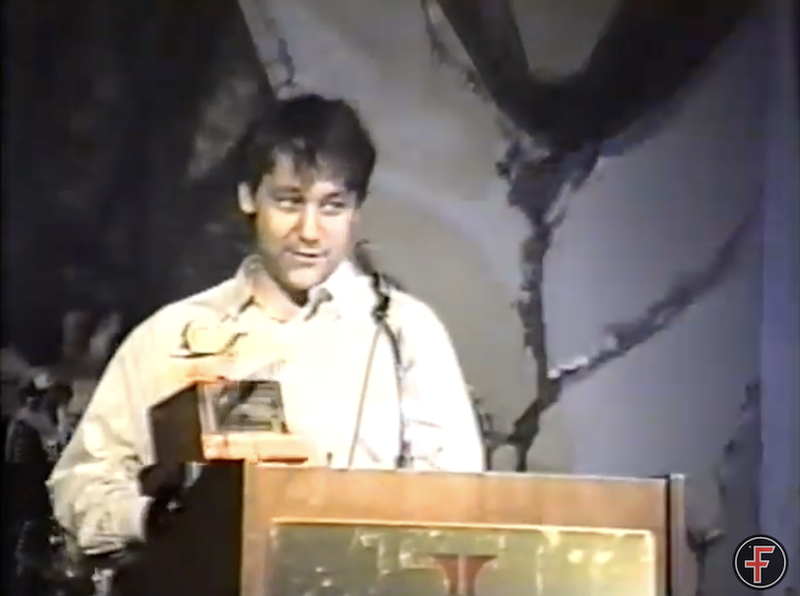 Sam Raimi accepting a Chainsaw Award at the 1994 ceremony.

As opposed to the previous two years (1992 and 1993), there were no problems in 1994 when it came to the getting the big winners to attend the third FANGORIA Chainsaw Awards, which took place June 11, ’94 at the Los Angeles Weekend of Horrors convention. The big winner was Army of Darkness, and with Bruce Campbell now in the honorees’ camp, Linnea Quigley took over as host. Not quite everyone from the Army camp was able to make it, so for the movie’s first prize, Best Soundtrack (presented by longtime genre composer Richard Band), Campbell accepted on behalf of Joseph LoDuca and filmmaker Richard Elfman read an acceptance speech from his brother Danny.

Since Campbell’s victory as Best Actor was a foregone conclusion (though there was some heavy competition), I decided to have a little fun with the movie clips and added a bit from one of the actor and Sam Raimi’s student shorts (courtesy of Scott Spiegel) before the Army of Darkness excerpt. Ted Raimi was the natural choice to present this one.

Then it was Raimi’s turn to take the stage and accept the Best Wide-Release Film prize for Army, presented by Anthony Hickox. Part of his speech was a joke referencing Steven Spielberg’s victory at the Oscars with Schindler’s List a little earlier in the year.

Army also took Best Supporting Actress (Embeth Davidtz) and Best Makeup FX; on hand to accept were Tony Gardner, who praised Campbell as “the most patient actor I know – second to [Darkman’s] Liam Neeson. Just kidding, man!” and KNB EFX’s Howard Berger, who thanked “Renaissance Pictures for letting us work on the film and Sam for breaking all our stuff.” Among the night’s other winners were Mindy Clarke, Best Actress for Return of the Living Dead III (accepted by director Brian Yuzna, who praised her as “one of the bravest actresses I’ve ever worked with”), George A. Romero, Best Screenplay for The Dark Half (who sent an acceptance speech thanking Stephen King: “I believe that the positive critical response to The Dark Half, and now this award, are direct results of my sticking close to the original work”) and Jeff Goldblum, Best Supporting Actor for Jurassic Park. There was one other big winner who traveled a great distance to be there; more on him tomorrow!