Then again, has Brandon Cronenberg ever pulled punches? 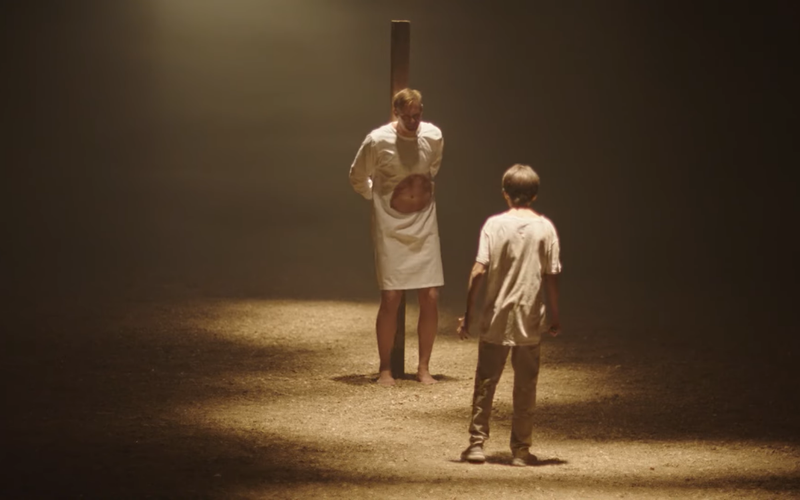 Ever since Antiviral landed back in 2012, director Brandon Cronenberg has only become more talented in terms of disturbing audiences. He followed that film with 2020's squirm-inducing Possessor, and by all accounts his soon-to-be-released Infinity Pool (which hits theaters later this month) is a full-on nightmare. Naturally, we cannot wait.

Yesterday, the good folks over at Bloody Disgusting revealed a brand-new clip from Cronenberg's latest, one which delivers on the promise made at the end of this official Infinity Pool plot synopsis:

“While staying at an isolated island resort, James (Alexander Skarsgård) and Em (Cleopatra Coleman) are enjoying a perfect vacation of pristine beaches, exceptional staff, and soaking up the sun. But guided by the seductive and mysterious Gabi (Mia Goth), they venture outside the resort grounds and find themselves in a culture filled with violence, hedonism, and untold horror. A tragic accident leaves them facing a zero-tolerance policy for crime: Either you’ll be executed, or, if you’re rich enough to afford it, you can watch yourself die instead.”

See what we mean? Whoever's pulling the strings in the country where Infinity Pool takes place may have some fairly standard rules ("Don't drive drunk and then run someone over," for instance), but the penalties for those crimes are something quite unlike the ones we have anywhere else. Fuck up here, and you're gonna get what's coming to you. But if you've got enough money, well, maybe they can work something out.

What's particularly horrifying about this clip is that Alexander Skarsgård's character is forced to watch his doppelganger's execution. No, wait, maybe the most horrifying part is the fact that the execution is carried out by a child? Hm, actually, maybe it's the sound design (the sound of the kid's knife finally making contact with Skarsgård's body is particularly evocative), or all that impotent begging for mercy? Plenty of unsettling business to go around here, no matter how you cut it (no pun intended).

Anyway, Brandon Cronenberg's Infinity Pool will hit theaters on January 27th. Something tells me we are wholly unprepared for the horrors it has in store for us, and what could be more exciting than that? Stay tuned for further updates on this one as they roll in, folks, and we'll see you at the theater later this month.