INTO THE VOID: A New Cronenberg Is A Special Occasion

And that goes doubly for CRIMES OF THE FUTURE. 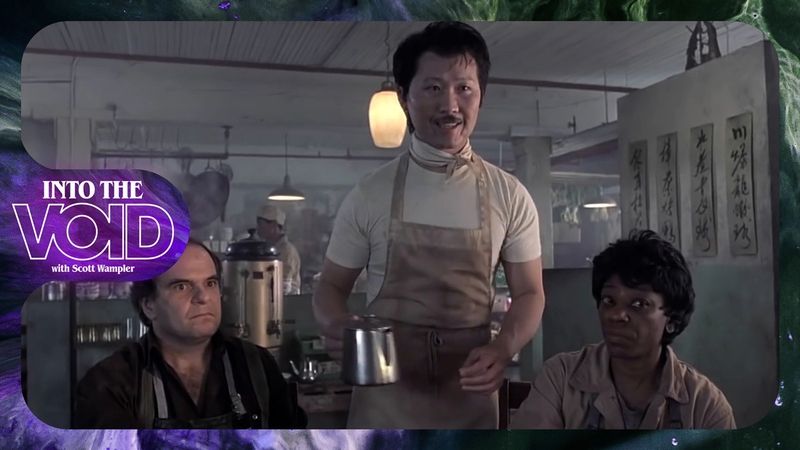 It should go without saying that the arrival of any new David Cronenberg project is something worth getting excited about (this is, after all, the same guy who helmed The Fly, Dead Ringers, Videodrome, and Crash, among many other go-for-the-throat bangers), but yesterday’s trailer for Cronenberg’s latest – and the reaction generated by the hypnotic footage contained therein – suggested that many film geeks, general weirdos, and body-horror fans were celebrating a bit harder than usual.

Here’s that trailer, in case you missed it:

I suspect the euphoric response to the Crimes of the Future teaser (as well as the news that the film would be premiering in-competition at this year’s Cannes Film Festival) wasn’t just about rooting for a master filmmaker who’s responsible for so many of the disturbing, sexed-up nightmares we’ve had over the years: it’s also about being unreasonably hyped to see this particular filmmaker getting back to his wilder, grislier roots. Scraps of DNA from other Cronenberg joints (including every title mentioned in the previous paragraph) pop up throughout that trailer, all but guaranteeing something very weird, very horny, very violent, and very Cronenberg.

To be fair, it’s not as though our man has totally eschewed those stranger impulses over the past decade or two. Films like A History of Violence, Cosmopolis, Maps to the Stars, and even A Dangerous Method all contain flashes of Cronenberg’s inherent weirdness and obvious predilection towards kink, and they’re all movies worth seeking out in their own right. But even the most rabid corners of this filmmaker’s fan base would have to admit that his late-career output has felt … oh, let’s call it moderately less bonkers than many of his early-career efforts. Nothing wrong with that, of course, it’s just that I think quite a few of us have been hoping to see the dude go bananas again for a good, long while.

Indeed, you’ve gotta go all the way back to 1999’s eXistenZ to get a real taste of The Full Cronenberg (it’s surely not a coincidence that, outside of Cosmopolis, eXistenZ represents the last time Cronenberg directed one of his own scripts). It’s a film that queues up many of his more frequently-deployed tropes – a fascination with the bio-mechanical, nightmarish bursts of unexpected (and often darkly comic) violence, a sort of default eroticism that thrums beneath the film’s surface even in scenes wherein nothing explicitly sexual is happening – and then turns them loose across a feverish little horror/sci-fi caper involving a celebrity video game designer (a razor-sharp, smoldering Jennifer Jason Leigh), her put-upon security guard (a delightfully naive Jude Law), and a brand-new VR experience that some people (well-armed anti-VR zealots, natch) might not want unleashed upon the world. 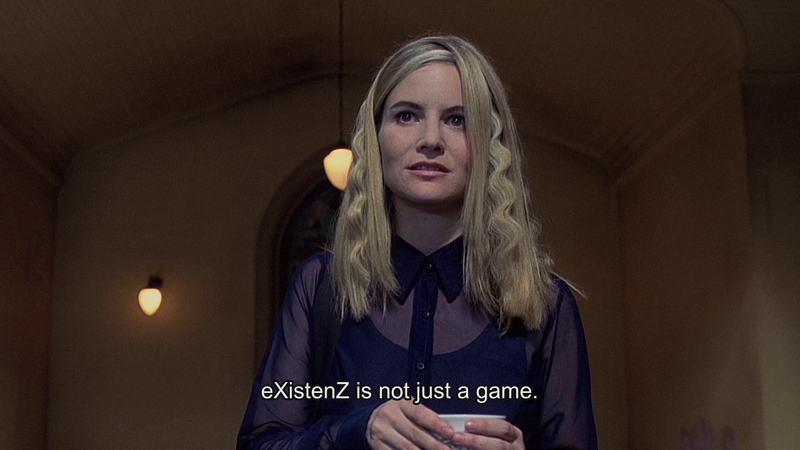 This is a film that feels primed for a new generation of film fans to discover. Though mostly well-received at the time of release (Rotten Tomatoes score: 74%) and being one of the director’s most accessible titles, it feels like eXistenZ gets ignored whenever you see folks compiling little ranked lists for their favorite Cronenberg movies; it’s not a “forgotten” film, per se, but it is a film I feel has been casually shrugged off as one of this filmmaker’s minor efforts. How minor? This is anecdotal, of course, but I’ve found myself recommending eXistenZ to horror nerds and genre enthusiasts who’ve never even heard of it on more occasions than I can count. They all know The Fly and The Dead Zone, sure, but eXistenZ? Suddenly everyone’s a Mariah Carey gif.

But there’s truly never been a better time to get onboard the eXistenZ fan train. In fact, the movie’s timelier than ever. On the surface, the VR experience Jennifer Jason Leigh’s Allegra Geller designs isn’t far off from the “second life” opportunity currently being pushed in the form of Mark Zuckerberg’s Meta (it’s only a surface-level comparison, though; as far as I can tell, Meta will require its users to don one of those sleek VR headsets rather than getting a butthole-esque “portal” installed along their spines … though, to be clear, this isn’t to say we can rule out that possibility entirely). The virtual space imagined by the film is rife with double-crosses, hazardous randos, inexplicable acts of violence, and, again, that base-level horniness we were talking about earlier. So, in theory, playing the game at the center of eXistenZ might be a bit like the standard VR experience being offered by Meta and its ilk, but in practice, it’s actually more like being on social media. Surely there’s something in there you’ll be able to relate to. 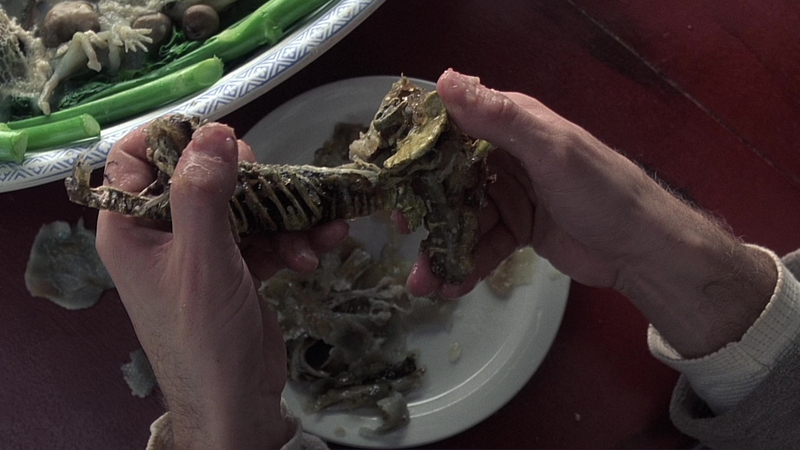 On top of that, Cronenberg’s film also serves up (in no particular order): an adorable little three-headed lizard guy, Willem Dafoe using a gigantic hole puncher on Jude Law, Oscar Hsu as the greatest restaurant waiter ever committed to film (“A birthday is a special occasion!”), a character constructing a handgun from the bones and viscera found inside a dead fish, and the aforementioned group of unhinged anti-VR fundamentalists who want Allegra dead because, amusingly, her tech “deforms reality.” This is a wild-ass movie, my friends, one overflowing with sinister imagination and weird little sci-fi wrinkles and Big Ideas, precisely the sort of thing people always yell about Hollywood not making anymore. Tired of the same old shit? Great, me too, I totally get it. My advice is to watch literally any Cronenberg movie, but to especially watch this one. 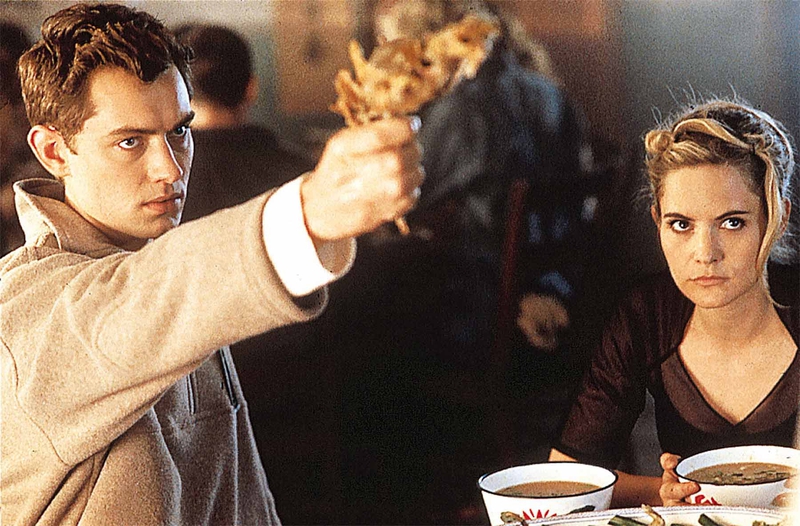 Will Crimes of the Future stack up to eXistenZ, Videodrome, Scanners, and the bulk of Cronenberg’s more outlandish efforts? There’s no telling, of course – both of yesterday’s teasers were very brief, and we’ve certainly been misled by trailers before. But the good folks over at NEON aren’t known for playing those sorta bait-and-switch marketing games, and what’s in those teasers is undeniably similar to the Cronenberg films that many of us grew up with.

I cannot wait to saunter into a dim theater this summer, soaking up the full-throttle A/C as the lights go out for good, and find myself transported into whatever freakish, near-future reality Daddy Cronenberg has cooked up for us this time. I wanna know everything there is to know about Viggo Mortensen’s little Brundlepod-ass surgery coffin, the gallery space full of weirdos who have come to see him do his work, the dude with pig ears on his forehead getting his eyes and mouth sewn shut (I already love this guy), and what might make one person tell another, “You fill me with a desire to cut my face open.” Cronenberg’s a filmmaker who creates cinematic worlds I always want to luxuriate in, as grimy and off-putting as they often are, and this one appears to be no different.

To which I say: Fuck yes. Bring it on and welcome back, sir.

Watch eXistenZ on any of the below platforms: