That sounds about right. 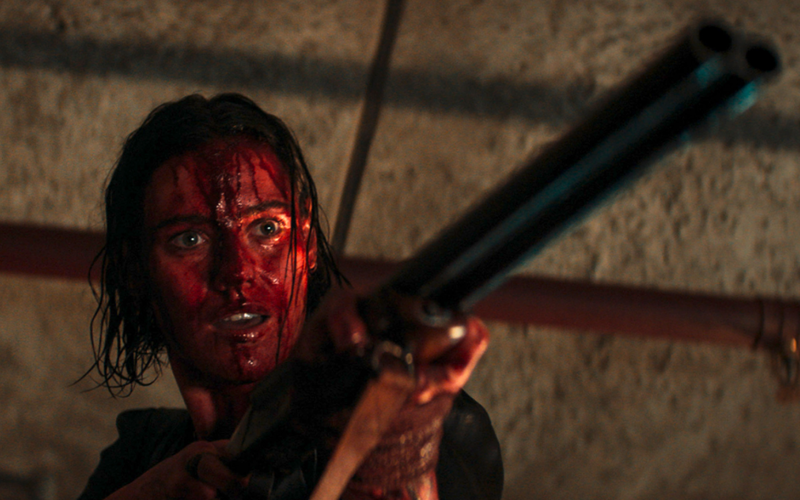 The good folks over at Empire shared a brand-new image from Lee Cronin's Evil Dead Rise this morning (that's it at the top of the page), and alongside that bloody new look at the film Cronin provided a handful of new quotes about what fans can expect from this highly-anticipated horror sequel.

For instance: how does Cronin describe the film?

“It straps you onto a rocket that’s fueled by blood. You can either get off or you stay on ’til it explodes.”

A rocket fueled by blood? Sounds like you'd need a lot of blood for that - and Evil Dead Rise certainly did:

“I had to hire an industrial kitchen to create the amount of blood we needed,” Cronin explains, going on to state that he spilled 6,500 litres of the stuff. Some of it, inevitably, even found its way home. “When I was checking out, I had to warn the landlord, ‘You’re going to find bloody handprints all over the apartment – but they’re not real, honest!’”

For those of you wondering, "6500 litres" is just over 1,700 gallons of the red stuff. That sounds like just the right amount of blood for a new Evil Dead movie, right? One supposes they could've gone with 2,000 gallons "just to be safe," but a certain point one also supposes that they'd just be gilding the lily.

“In the fifth Evil Dead film, a road-weary Beth pays an overdue visit to her older sister Ellie, who is raising three kids on her own in a cramped L.A. apartment. The sisters’ reunion is cut short by the discovery of a mysterious book deep in the bowels of Ellie’s building, giving rise to flesh-possessing demons, and thrusting Beth into a primal battle for survival as she is faced with the most nightmarish version of motherhood imaginable.”

Head on over to Empire to read a bit more about the upcoming Evil Dead Rise, and do be sure to stay tuned: we're very, very curious about this one, and will be monitoring things very closely all the way up until the film's release on April 21st. We're anticipating a bloody good time at the movies.