"We adapt and we survive." 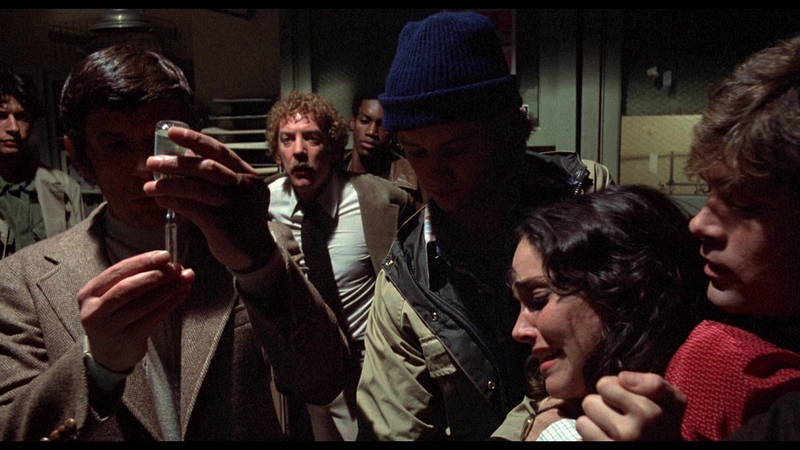 As the coronavirus epidemic quickly took hold across the globe in March of 2020, many traditional "virus" movies began trending: Steven Soderbergh's Contagion, Terry Gilliam's 12 Monkeys, even Robert Wise's The Andromeda Strain. One film that did not get as much traction in the COVID era is director Philip Kaufman's 1978 version of Invasion of the Body Snatchers, which is misperceived as an alien invasion movie when it is, in fact, an alien virus movie. It just so happens that this virus from space absorbs your DNA and replicates your body as part of a hive-mind off-world species via plant-like pods that grow on vines, destroying the "original" in the process.

Starring Donald Sutherland (Don't Look Now), Brooke Adams (The Dead Zone), Leonard Nimoy (Star Trek franchise), Jeff Goldblum (Jurassic Park) and Veronica Cartwright (Alien), Kaufman's version of sci-fi novel The Body Snatchers by Jack Finney is drenched in glorious '70s paranoia that makes it feel akin to post-Watergate thrillers like The Parralax View. Often considered one of the best horror remakes ever made alongside The Thing, The Fly (also starring Goldblum!), and The Ring, the film has been newly re-released in Ultra HD on a new 4K Blu-ray from the reissue masters at Kino Lorber. Upon a rewatch of this new 4K transfer, one aspect of the plot stood out like a sore thumb as being directly correlated to the initial fallout from the pandemic.

There is a scene about three-quarters of the way through when San Francisco Health Department workers Matthew Bennell (Sutherland) and Elizabeth Driscoll (Adams) are holed up in their government building after trying to outrun the pod people. Glancing through the blinds to look outside, they see hordes of the replacement alien people forming lockstep lines in the middle of the night as a megaphone coordinates them to carry more pods out of a building, presumably for further dissemination. Here is the dialogue between the two still-human protagonists:

Elizabeth: Matthew, we'll never be able to stop them!

Matthew: Yes, we will.

Elizabeth: We can't! Look, they control the whole city. 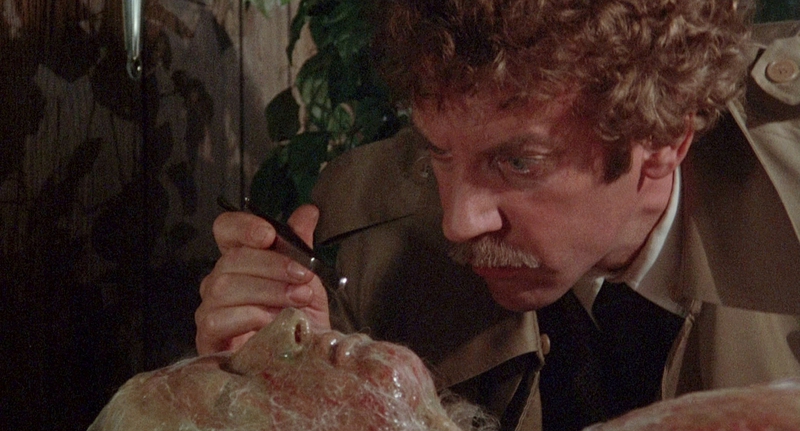 This is the traditional bottom of the second act low point where the heroes are in a tight spot and all hope seems lost, but the difference is in Kaufman's nihilistic universe all hope is actually lost. Even though Matthew will go on to burn down a warehouse subbing as a pod production facility, it is a futile gesture in the face of the mounting pod pandemic. Ultimately Matthew himself will not survive the night, and by sunrise, he will be transformed into a pod person as Nancy Bellicec (Cartwright) finds out to her chagrin in the oh-so-memorable end scene.

Even though this iteration of Body Snatchers represents a surface fear of conformity that would carry through to future remakes (1993's Body Snatchers and 2007's The Invasion) as well as other pod movies (Halloween III, The World's End), it also boasts a point of comparison to the events of 2020 in Matthew's stubborn refusal to see the pandemic for what it is: Insurmountable. The "post-COVID" reality we're living in right now is a "COVID forever" reality in that, like the flu, the coronavirus, and its many mutations, appears to be something humanity will be contending with indefinitely. Whether we choose to face that reality by getting vaccinated is another, sadly politicized story.

Today, the death toll in the United States alone sits at a grim 794 thousand people lost to COVID-19, but on February 26, 2020, then-President Donald Trump boldly declared that the virus would miraculously disappear: "You have fifteen people [cases], and the fifteen within a couple of days is going to be down to close to zero." Trump held that line even after the first death on February 29, calling the alarmism over the virus a "hoax." By April of 2020, Trump's official verbiage predicted deaths would plateau at "about a 60,000 mark, which is 40,000 less than the lowest number thought of."

Just as audiences in 1978 were hopeful that Matthew could somehow miraculously turn the tide in humanity's favor, Trump, his followers, and even many of those on the other end of the political spectrum could not reckon with the reality that the only way to combat the increasingly devastating effects of the virus was to develop a vaccine, which scientists stated –correctly- would take a year minimum. Not weeks. Not months. A full calendar year. Like Matthew, many people just assumed scientists, the government, or even a simple twist of fate would somehow get us out of this pickle before we had to keep our kids out of school for too long.

What's amazing in watching Body Snatchers now is how utterly delusional Matthew seems, especially knowing how it all shakes out in the end. There is no way his little pyrrhic victory at the warehouse was ever going to have any effect with the alien virus already in full swing, much as enforced travel bans and business closures in late March 2020 were never going to be the magic bullet given that the first recorded case of an American getting COVID happened in late January. The saddest part is that many decent, hard-working people in this country still believe the hoax theory, and live their lives willfully defiant against quarantines, mask mandates, and vaccine urgency. This cult-like denial of reality reminds one of Leonard Nimoy's new-age guru Dr. David Kibner insisting to a harried woman early on in the movie that her husband is still her husband, despite all evidence to the contrary. 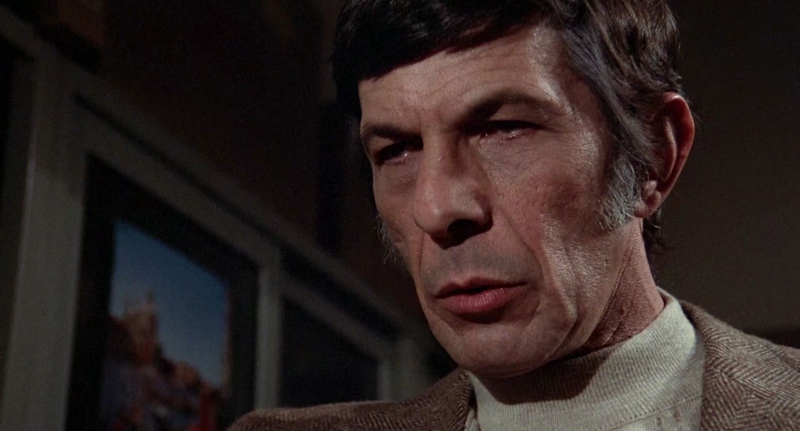 That shared delusion is now the scariest, most prescient part about Kaufman's movie, especially since we –the unwitting audience- become complicit in the magical thinking that decades of Hollywood cinema had programmed us to believe the narrative would follow. In an interview with The Hollywood Reporter, Kaufman acknowledges he knew the grim conclusion of Body Snatchers would be a tough sell, which is why during the making of it he deliberately withheld his and screenwriter W.D. Richter's preferred ending from everyone involved –including the studio, United Artists- until it was shot. The scripted happy ending the studio signed off on was never even shot, and executives didn't know it was coming until the final cut screened at George Lucas' house fairly close to release.

Much the way Don Siegel's original 1956 film is interpreted as both a screed against McCarthyism or, alternately, a broadside to Communism, the 1978 remake's pervasive paranoia can have a Rorschach effect on the audience. Even upon its December 1978 release, audiences drew instant parallels to the Jonestown mass suicides in Guyana, where 909 members of Jim Jones' Peoples Temple cult –which originated in San Francisco- took their lives exactly one month prior in November '78.

"Part of the pod thing is becoming single-minded, and becoming part of a group of people who are single-minded and bent on survival of that group," Kaufman told The Hollywood Reporter in 2018. "Just before the film was released, Jonestown took place, and that was a case of a lot of people from San Francisco were looking for a better world and suddenly found themselves in pod-dom, and it was fatal. It could not have been a more pointed reason for watching the movie."

In Invasion of the Body Snatchers, Donald Sutherland's health department official maintains this misguided idea that he alone could somehow stop the pod invasion despite mounting evidence that this is impossible. The early days of the COVID Pandemic showed that many Americans were just as gullible, thinking that we could overcome this "alien" virus and return everything to normalcy, yet we still face the harsh realities of life under COVID every day. Pointing straight at us. Screaming in our face. 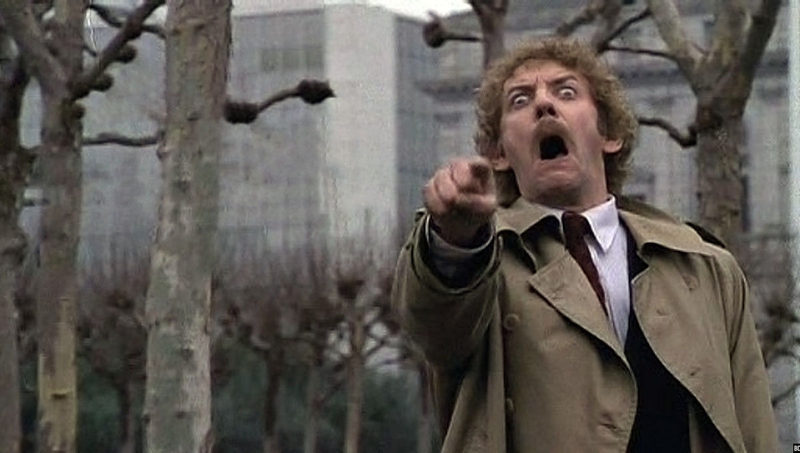 Invasion of the Body Snatchers is now available in a newly restored HDR Dolby Vision master from a 4K scan of the original camera negative, approved and color graded by Director Philip Kaufman, click here to get your copy.