A first-hand history of preserving genre movies "too outrageous for prime time." 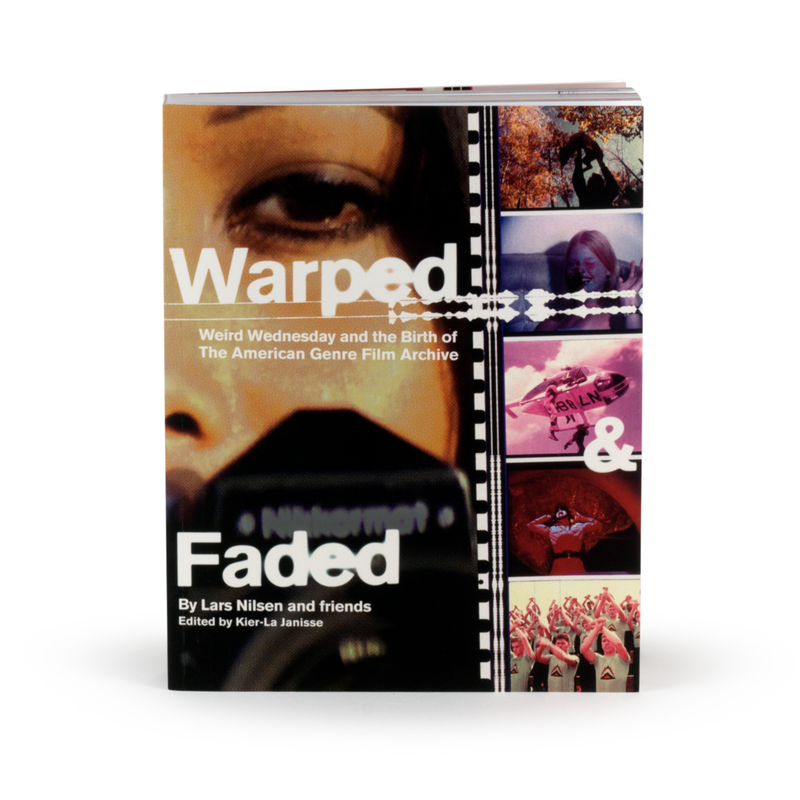 I usually bristle when I see people championing the VHS format; like any good movie fan, I had a collection of bulky analog tapes in the '80s and '90s, but once DVD came along, I began the process of converting and never looked back. And why would I? The cropping/pan and scan presentation alone was despicable; it was only toward the end of the format's reign that the studios (and a few boutique labels like Anchor Bay) began releasing letterboxed versions on the regular. So that, along with the murky transfers and oft-questionable audio presentation, made it an inferior choice no matter how you slice it. I was happy to be rid of it once better options came along. As we are now three tech generations past VHS, I am baffled when I see someone proudly watching the likes of The Thing or DVD-era releases like Scream on this lousy format. Why are they doing these films - and their creators - such a disservice?

But admittedly, I do get their reasoning, at least in a general way. For many, it's simply a nostalgia thing; an attempt to reclaim the time when these films, and so many others, were something they discovered, with only a friend's recommendation to guide them, if that much. Maybe they were just drawn in by the cover art on the VHS case at the video store, or happened to stumble upon it on cable. That sense of "wait, what IS this?" is harder and harder to experience nowadays, with everything being so easy to find information on and even easier to watch. Everyone has scrolled through Netflix for a while before settling on something they had seen before, or, if they did take a chance on something new, probably started watching their phone just as often after only a few minutes. Not only is it getting harder to find something completely unknown, it's also getting harder to commit to it. 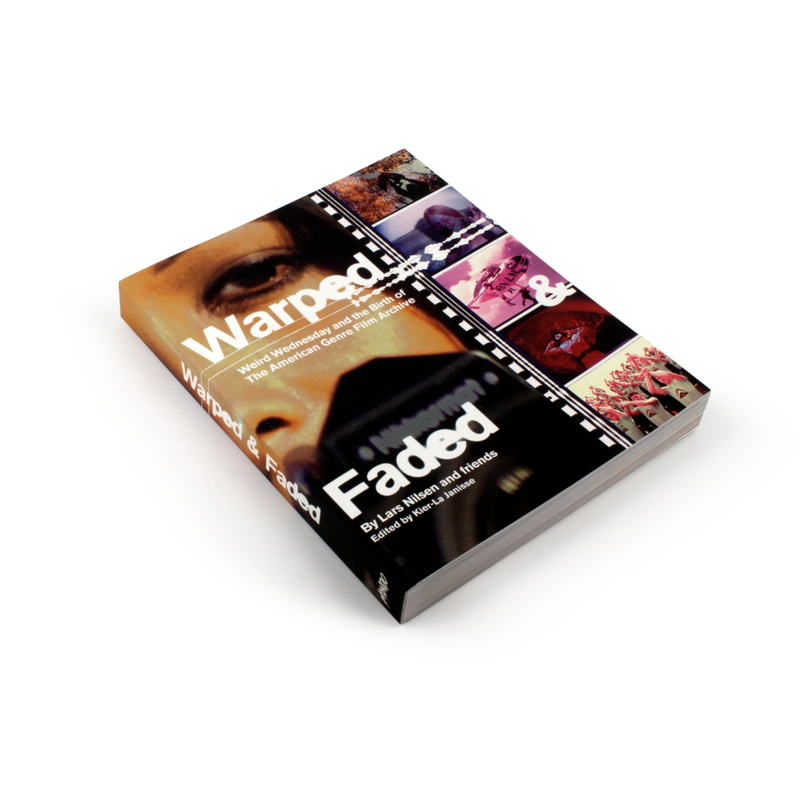 So that, along with the year and change that we were denied a trip to the movie theater, makes the publication of Warped and Faded such a perfectly timed release. The book, written by Lars Nilsen and edited by Kier-La Janisse, is broken up into three parts. The first is an oral history of Alamo Drafthouse's "Weird Wednesday" screening series, as told by Nilsen, Janisse, Drafthouse gurus Tim and Karrie League, and others, beginning with the early days of the Drafthouse theater (before it was a chain) and how League went from collecting trailers to collecting full blown film prints. That collection, much of which was amassed from collections that were being left to rot in warehouses, is what led to both the Weird Wednesday screenings as well as the American Genre Film Archive (AGFA), which is dedicated to the preservation of these underloved films that might otherwise be forgotten. Rallying cries to "save the theaters!" are common, but let's not forget that we also need to save the films they show, because for every Avengers that'll never go missing, there are a dozen 1960s drive-in flicks that will be gone forever if not for the efforts of groups like AGFA.

One might think the story of how a few folks in Texas began a film print collection would be a dry affair, but it's every bit as entertaining as the films they are discussing. On one occasion, League had to fill a rental truck with as many prints as he could before the building they were housed in was destroyed, occasionally having to stop to sacrifice a few of the heavy prints as he had doubled the truck's weight allowance - someone give us a Sorcerer-esque movie about this trip, please. One guy agreed to help out with a haul relocation in exchange for a single specific print that was contained within that collection, which I found incredibly charming (I'd probably do the same, honestly). And there's something so hilarious about buying over a hundred prints only to discover five of them were The Garbage Pail Kids Movie, which, as anyone who has seen it can attest, is five more than anyone would ever want. Also, since nearly all of the films were independent, occasionally the Alamo would show them without knowing who actually owned the exhibition rights, prompting League to set up a separate account where such fees could be paid out after the fact when they got an angry phone call from someone wondering where the print even came from (not all were angry, some were just delighted the people were seeing their work on the big screen).

And here's the kicker: the screenings were free! At least, at first - after a few years, they began charging a buck or two just to keep out unsavory types, but for that dollar, the audience was getting to see a film that had fallen beneath the cracks. But those first couple years, described as "the wild west" more than once, come off as a truly exciting reason to stay up until 2 am on a Wednesday night, if only to see what obscure insanity they had found this time. The screenings all had an intro from Nilsen or one of his cohorts who could put it into its historical context, for a crowd who had been lured in by the promise of seeing something they likely couldn't have stayed home to watch on DVD. Sometimes even the hosts themselves weren't even that familiar with the films, and that's what makes it so exciting - everyone was finding out exactly what this film was together, as a communal experience. You can't really get that anymore; even if it's a title you're not familiar with, a few taps on your phone will let you know what you're in for. That wasn't always the case - it's noted that some of these films didn't even have IMDb pages at the time! 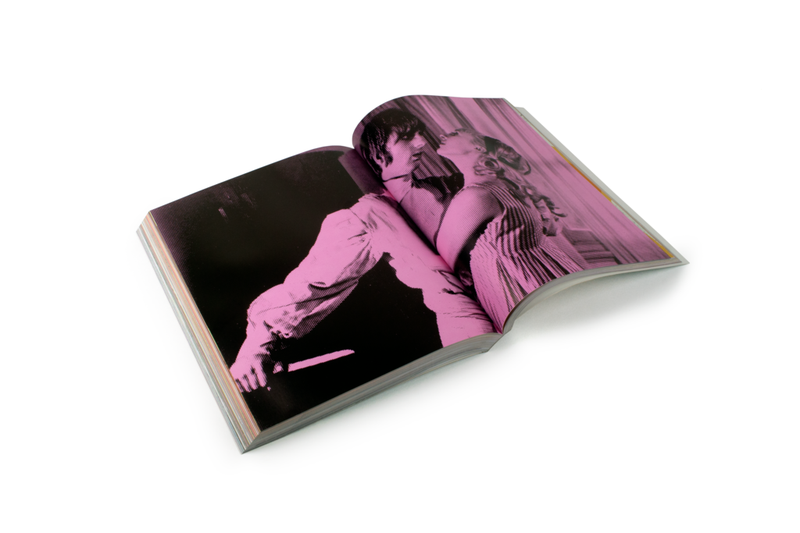 The second part of the book is a collection of the writeups for the WW screenings that appeared in the Alamo's weekly calendar guide, along with their screening date and basic info about the film (year of release, director, etc.). It's presented alphabetically, so you can flip through and see if your own favorite obscuro ever showed as part of the program (alas, no Cathy's Curse - it was the first thing I checked), but these brief summaries (most written by Nilsen) have a way of making everything sound worth checking out, even when the film's flaws were highlighted. Rarely will they give you the idea that they were about to unveil a misunderstood masterpiece, but Nilsen and the others were very adamant on one point: they were not cooler than these movies. MST3k-esque behavior wasn't tolerated; they were just being honest about some (OK, a lot) of the films' shortcomings while giving them a "they don't make them like they used to" nod of appreciation. The dates also let you imagine what certain showings were like; I would have loved to have been there when they scheduled the then-obscure Final Exam, a slasher featuring a terrorist attack as a prank... on September *12th*, 2001. Oops.

The third section is the Weird Wednesday Hall of Fame, in which the stars and directors whose work appeared with some frequency at these screenings are given full biographical essays/tributes. Al Adamson, Buck Flower, Susan Tyrell, Stephanie Rothman... these names might not jump out at a casual movie fan, but if you read through the previous section, you were likely to see their names again and again, and this section lets you know in full what they were all about. You might learn some stuff even if you're familiar with their work; I had no idea John Saxon was a. not really named John Saxon and b. was a teen heartthrob due to early appearances in B movies. And while I own the Al Adamson set that Severin put out, I haven't gone through it all yet, so his bio convinced me I need to dive back in, if only to watch the film featuring a cameo from KFC guru Colonel Sanders, as Adamson made a deal for free chicken for the cast and crew every day in exchange for Sanders giving acting a shot.

Obviously, if you are the type that doesn't understand why people flock to big screen showings of Jaws or Halloween every year when they can be easily watched at home, you probably won't be the target audience for this particular book. But if you regularly attend repertory screenings, it should be a no-brainer that you'll find this to be a valuable and entertaining history lesson. You'll walk away with a newfound appreciation for what these programmers have to do in order to make these screenings happen, plus a few tidbits on why a film print is sometimes mangled or discolored (ever wonder why an older film print is pink? Or has red dots all over it? It's in here). And - perhaps most importantly - you'll almost certainly walk away with a new list of older exploitation/grindhouse/genre films to track down for yourself. Some of which you can hopefully see on the big screen, where their shameless insanity can be magnified for your eyeballs, free of any other distractions.

Warped and Faded is available from the Mondo Shop (and presumably at Alamo Drafthouse locations, where applicable)