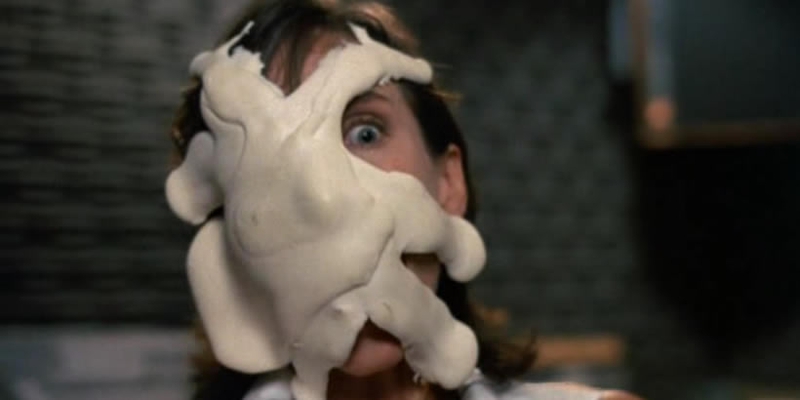 Non-profit arthouse organization Denver Film announced today that they uncovered thirty minutes of never-before-seen footage from The Stuff. According to their Twitter announcement, the Academy of Motion Picture Arts and Sciences sent a 35mm reel of the movie to Denver Film. On this reel, an extra thirty minutes of footage was tucked away, has nobody looked through this particular reel ever in the course of the last thirty-six years?! We have more questions than answers, but either way, this is exciting stuff.

We made a remarkable discovery while looking through the 35mm reel of THE STUFF.

The print came from the Academy of Motion Pictures Arts & Sciences and is actually the Director’s Cut with 30 extra minutes of footage not found anywhere else. 🤯 https://t.co/mfcNGTXDog pic.twitter.com/OyIechbwe0

The irresistible Fluffernutter-esque goo flowed into theaters in 1985, part creature-feature a la The Blob, part social commentary on consumerism, and who can forget that communism sub-plot. Now we're wondering if those thirty additional minutes provide an alternate ending, more communist sub-plot, or most ideally— a combination of more of those fantastic high production faux commercials along with more of The Stuff totally annihilating everyone in its gooey path.

The Stuff easily occupies one of my top three spots in one of my favorite sub-genres which I affectionately call "Don't f***ing put that in your mouth!" (that's not benign bacteria you're eating) sitting pretty with the likes of Soylent Green and Motel Hell. Enough is never enough, bring on those thirty extra minutes!

For good measure, enjoy the trailer and this earworm of a jingle: