THE KEEPER Comes Home: An Interview With The Creative Team Behind The New Graphic Novel 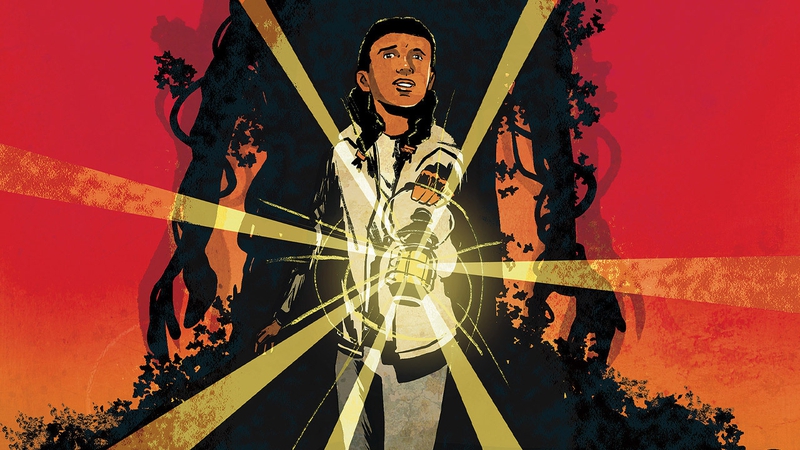 Is there any form of horror media Tananarive Due can't master? The release of The Keeper, co-written with Steven Barnes, marks the duo's first graphic novel out of Abrams Megascope, and proves them yet again to be masters of contemporary horror.

The story follows Aisha as she confronts and navigates life's most banal, assured horror: the death of a loved one. As many of us know all too well, the grief associated with monumental loss changes a person on a cellular level, and the person we become in its aftermath is largely determined by who- or what- we reach for in our most vulnerable moments. That millions of children have become orphans as a direct result of Covid-19 makes The Keeper particularly resonant; its depiction of grief, universal; and the hope it offers, a lifeline to those desperate for something to hold onto in the dark.

FANGORIA caught up with the creative team behind the project- Due and Barnes, joined by illustrator Marco Finnegan, and Megascope director, John Jennings- to talk about the process of translating a story across mediums, the terror of childhood, and finding The Keeper's home.

John, can you speak about the legacy of Black horror in comics?

John Jennings: There's an EC Comics story, "The Guilty" (Shock SuspenStories #3) about a Black man [accused of] kidnapping a white girl. Some of the earlier images would be stuff like The Living Mummy from Marvel. "Banjo Lessons" came out in the eighties by Bruce Jones. Wayne Howard was a Black creator [who] actually created one of the first horror anthologies, Midnight Tales for Charlton Comics and was one of the first people to utilize this Cryptkeeper-interlocutor character also as an adventurer.

I really think the boom has been fairly recent and fueled by the things being seen in the cineplexes, like Jordan Peele's work and Lovecraft Country. Comics have always been a copycat medium, so if you look at some of the early images [in] superhero comics- Luke Cage and the Falcon and these characters coming out of Marvel- they're mimicking blaxploitation films. But there's been a boom in independent Black horror too. These two brothers out of Mississippi called Second Sight Publishing [have] been very successful.

I don't think we would have the opportunity to do something like The Keeper [without] the movies but also stuff like Rodney Barnes' Killadelphia or Bitter Root by David Walker, Chuck Brown, and Sanford Green. I think it's been a Black horror renaissance in comics recently.

Tananarive, Steven, at SDCC, you talked about The Keeper starting off as a screenplay. What was the process like of transforming and adapting the story into a graphic novel form?

Tananarive Due: Anyone who tells you that [a] story started with a screenplay, and you haven't seen that movie, there's heartache at the end of that story. We sent John the treatment before it was even a script and he [said] this would be a great graphic novel. And when I was a complete newbie, the late great LA Banks (Leslie Banks), who was a dear friend of mine, some of our last correspondence [was] her encouraging me to get into graphic novels. [But] because there was this level of mystification to it, [I didn't] know how to proceed. So we just sent [the script] to John as an informed reader we trusted and his admiration for the project was amazing and opened this whole new door.

Steven Barnes: A graphic format has things that it does very well, and things it doesn't do as well as live action. The artist is going to be director, set director, cinematographer, special effects—they're carrying a lot. I think the question is always one of, can this be done in this format in the amount of time we have to do it in? And a good script that's primarily visual, where you're not leaning too heavily on the dialogue, I think can translate to a graphic novel pretty well. 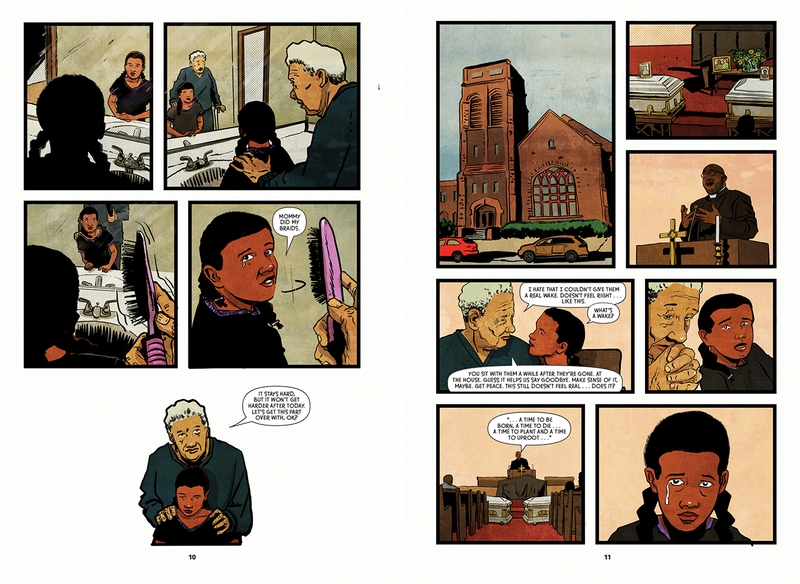 What did the teamwork between you look like while approaching and learning this new medium together?

TD: That story bloomed from an incident when I was maybe seven or eight. I spent the night in my great-grandmother's bedroom on a trip to visit my grandparents. She had emphysema so she was on an oxygen machine, so all night I was listening to this hissing, terrified that she would die overnight. But also sort of staring face to face with what aging and mortality looked like. And something clicked in my head like, oh, this happens. And I bet she used to be a little girl in her mind just a short time ago, and now look at her. And that's going to happen to me. I still carry that terror around with me from that realization.

Marco, I know when John first approached you, it was with questions of ants…. How was the collaboration and illustration process for you?

JJ: The other component was trying to find a good colorist for it. Alexandria Bachelor had been doing flat work and assistant work with me on Kindred and other books and I thought she was ready for her first book.

MF: I think that coloring layer is the unsung hero. If I was the acting and the directing, that was the cinematography. That layer put it into a creepy but not over-the-top space. These are the best-written children in comics in a long time, and anything that would've been too heavy-handed would've, I think, hurt the story. And the way that Alexandria put the color down was just enough to be a little off-center from reality.

I really love The Keeper as a monstrous figure. What was it like translating this idea of a monster out of text and into visual language?

JJ: As my friend, Stacy Robinson said, it is not of the Lord.

MF: In the screenplay, it was [made up of] constantly moving things. So to try to get that energy, it's [not] consistent from panel to panel. There seem to be things jumping off of it and moving, without being too on the nose. But I don't think there was ever a moment where I didn't know it was gonna look like that. It was very clear in the writing.

MF: And I think the scariest thing about the book to me wasn't the monster. The first time I read it I was like, this poor kid. It's so scary in that, monster aside, [it depicts] my worst nightmare.

TD: So many stories [originate] in childhood, where there's no choice. You have to make choices as adults but so many people are saddled by the trauma of their past. And that's to me, what the true horror of The Keeper is—when Aisha has to ask herself who the monster is in the story.

SB: What is she willing to do to survive? 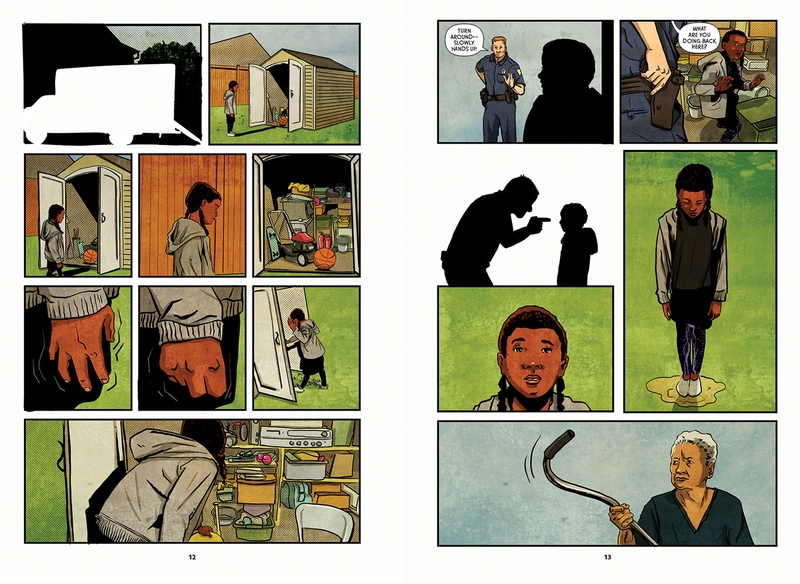 I'm interested in your sense of the similarities and departures between writing novels and short stories, screenwriting, and now comic writing. Does it really all just kind of come down to the opportunity at hand, or do certain stories live in certain mediums for you? Does the medium change your process and approach?

TD: I like to consider myself omni-creative. Most of my ideas used to come to me as novels because I was a novelist, but especially now, a lot of my ideas come to me first [as] scripts, but the core story is something that can be translated across all media. There's a short story version of The Keeper called The Caretaker that ran in FANGORIA. But the big difference for any prose writer trying to transition to screenwriting is that you have to get out of that habit of going into your character's thoughts and memories constantly. You have to think of how to convey the story visually in the present and how to choose the visual symbols that will help us understand how a character is feeling without them telling you how they're feeling.

SB: With novels, you have room to ramble. I think graphic novels are similar to movies in that movies really thrive on the conflict between human beings and their environment. Graphic novels, like movies, are going to excel when- if you remove the dialogue- the story still communicates. Even the best movies, the most popular movies, you could turn off the sound, and still know what's going on.

John, what made The Keeper the right fit for Megascope?

JJ: We wanted to focus on stories by and about people of color. And you can be a white creator and make a great story about a Black person. We're talking about [work that privileges] Black subjectivity and the subjectivity of people of color. The work that all three of these creators do really fit those goals so I thought it was a perfect fit. When I first read The Keeper, I was like, okay, this is scary as hell. I love it.

TD: You know, I really feel in some ways, I got the movie that we were dreaming about.

Bring home The Keeper today! Get your copy right here. 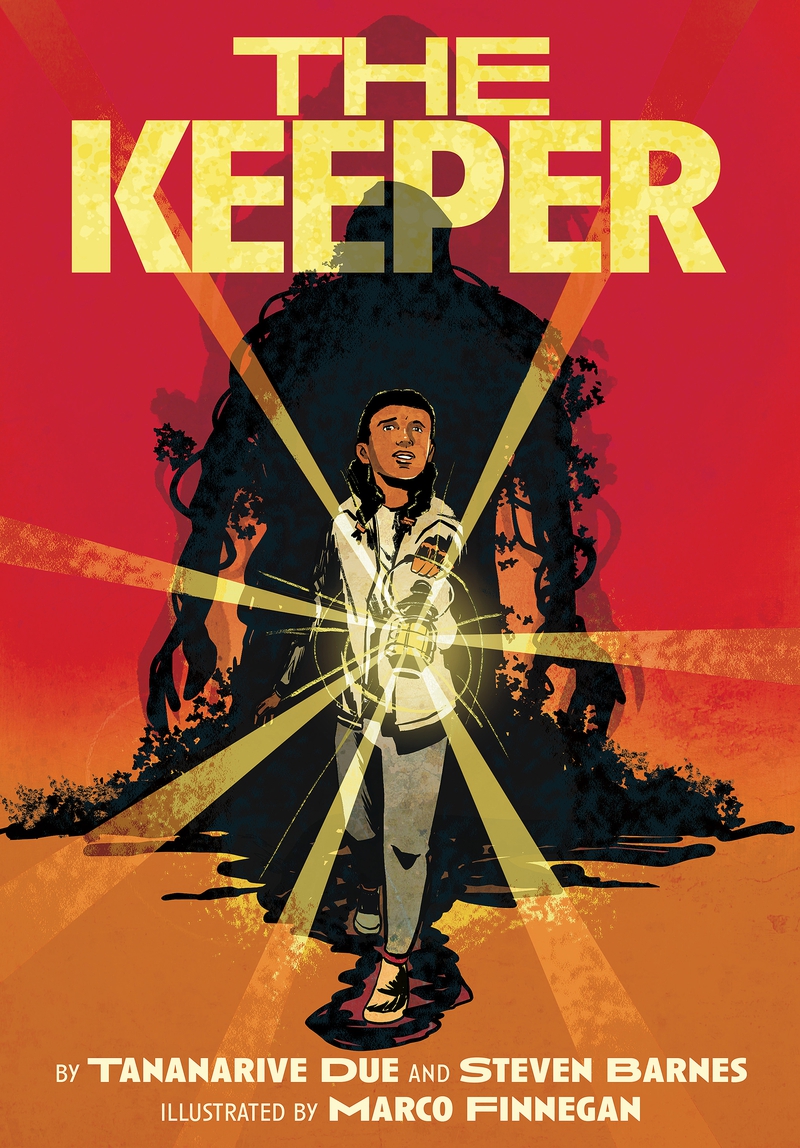