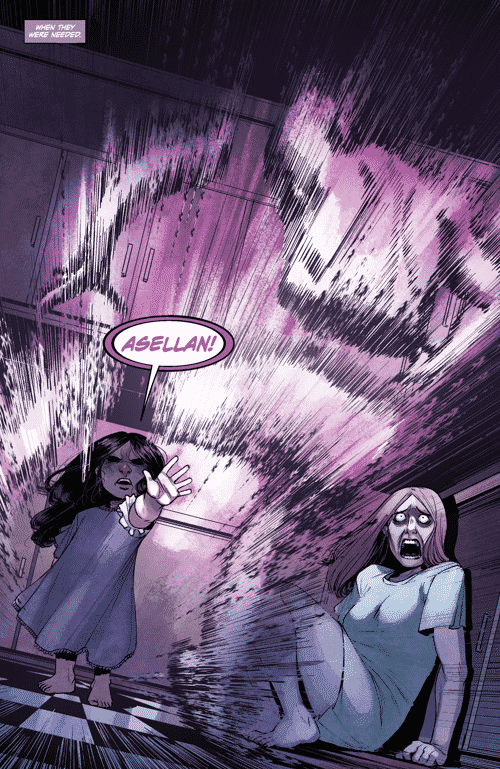 Shadow Service from Vault Comics is Cavan Scott and Corin Howell's love letter to all things supernatural and horror; a world where secret agents fight demons on the streets of London and a witch-turned-private detective is recruited by an intelligence service that goes by the ominous sounding name of MI666.

Both Scott and Howell are also life-long fans of FANGORIA, and have pored over the world's best horror and cult film magazine for as long as they've loved horror movies. Here they share Shadow Service's most FANGORIA-inspired moments, at least so far... The comic is returning in early 2022 and promises even more monsters and gore-soaked chaos. 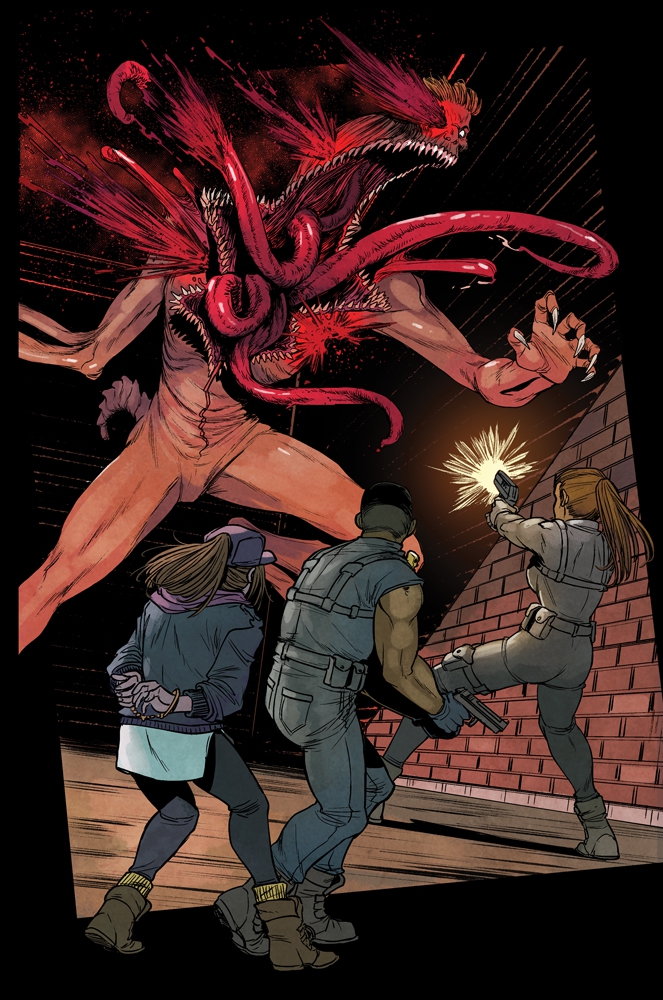 Cavan: This was our first proper demon. I remember telling Corin, 'go wild!'
Corin: I wanted to go as Lovecraftian as I could possibly go.
Cavan: You definitely did that, although this was only just the beginning.
Corin: Eldritch horror is my JAM, Cavan.

ALL YOU CAN EAT
From Shadow Service issue four 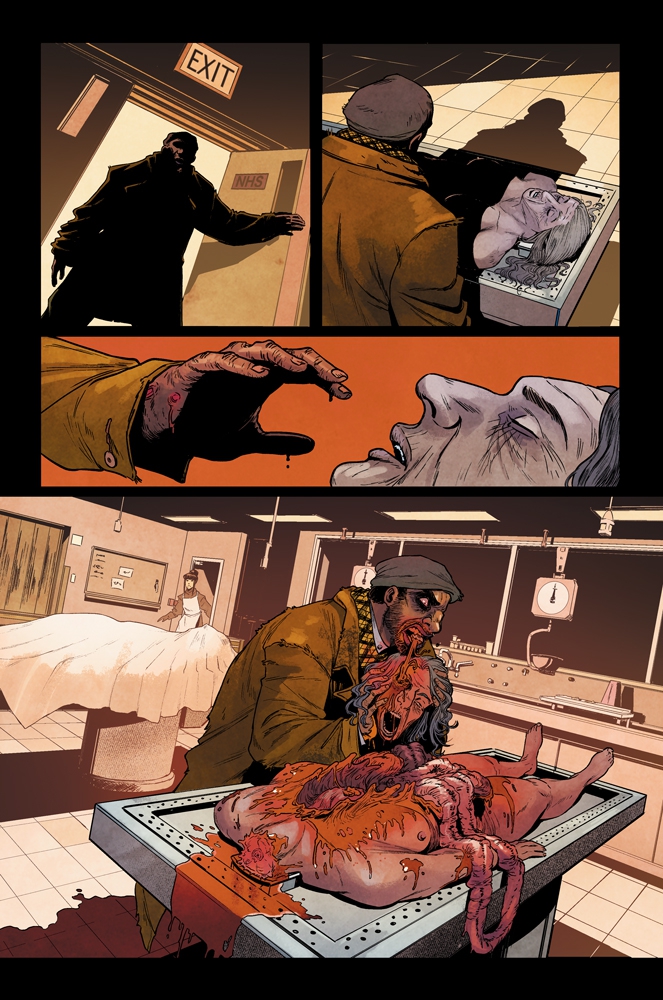 Cavan: All of MI666's agents are a little broken, not to mention cursed. Coyle, for example, is a ghoul who goes undercover by eating dead bodies so he can transform himself into a perfect copy of the corpse. Handy for a spy. This page is from his origin story.

Corin: My interests in true crime definitely drove this one, listening to Last Podcast on the Left was a definite inspiration.

COUGHING UP YOUR GUTS
From Shadow Service issue eight 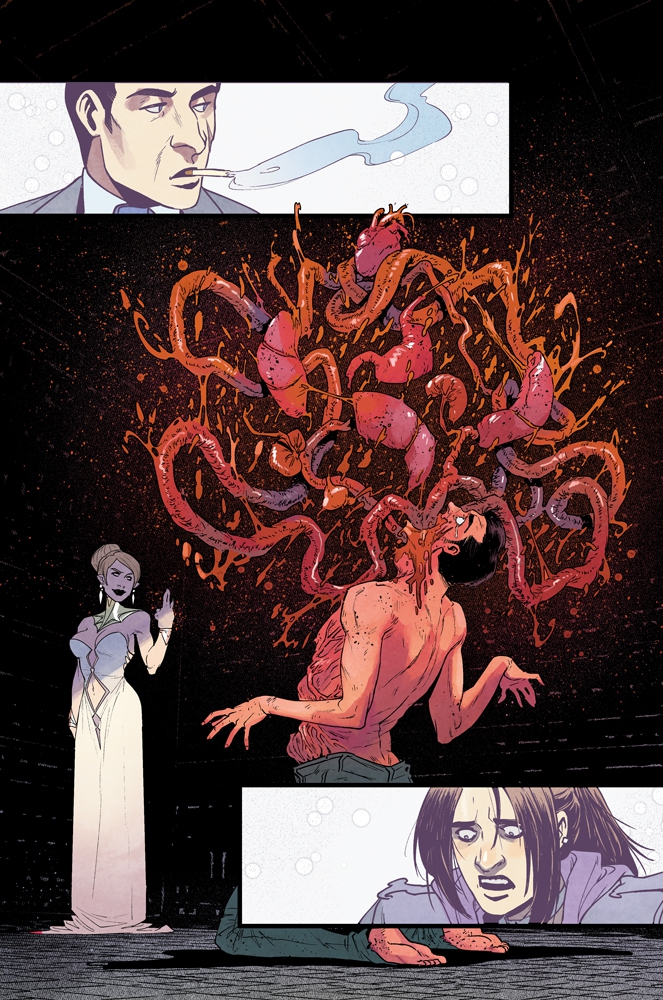 Cavan: We wanted to top the torture scene in Casino Royale. I think we managed it.

Corin: I may have rendered too much here, but I was in too deep, so I just decided to bite the bullet and keep going. GORE. EVERYWHERE. 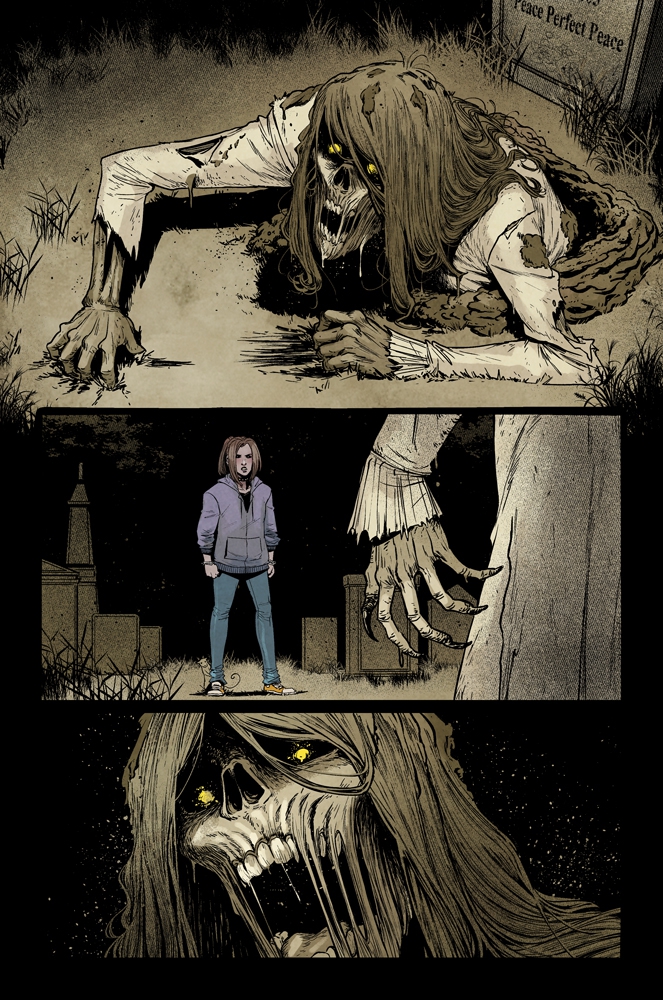 Cavan: Can this page get any more FANGORIA?

Corin: LOL. This one definitely got inspired by the original Creepshow movie. "Where's my caaaaake?' 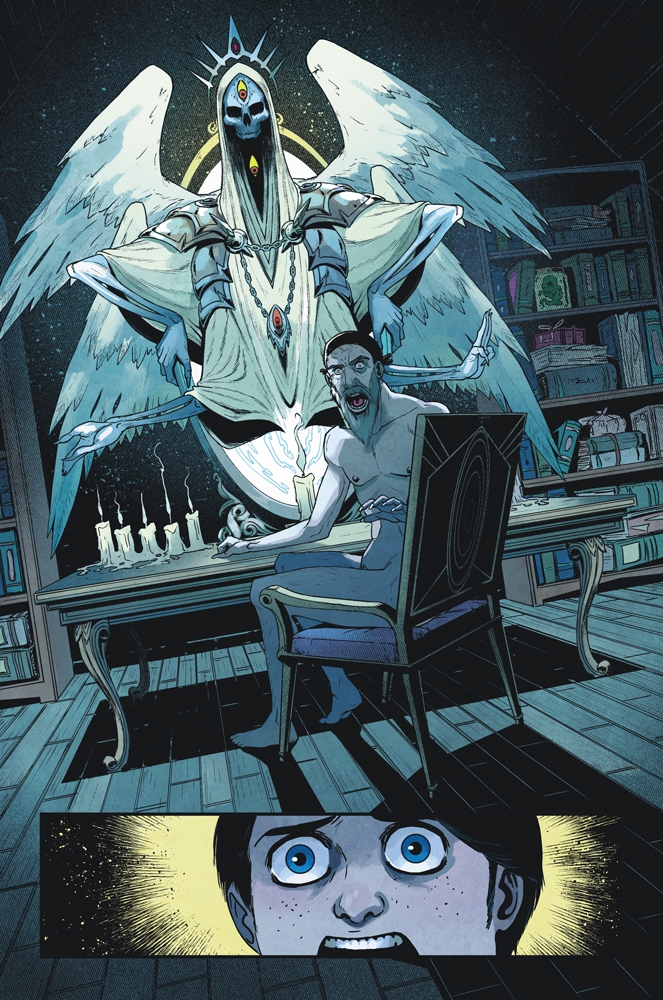 Cavan: Early on in the series, back in issue two, I think, Corin started to add these weird skeletal statues into the background of scenes. They were just so beautiful and macabre that I knew I had to find a way to work them into the story; I just didn't know how. And then I realized that issue nine would feature a flashback to Elizabethan alchemist John Dee communing with an angel. I couldn't have asked for a better design! 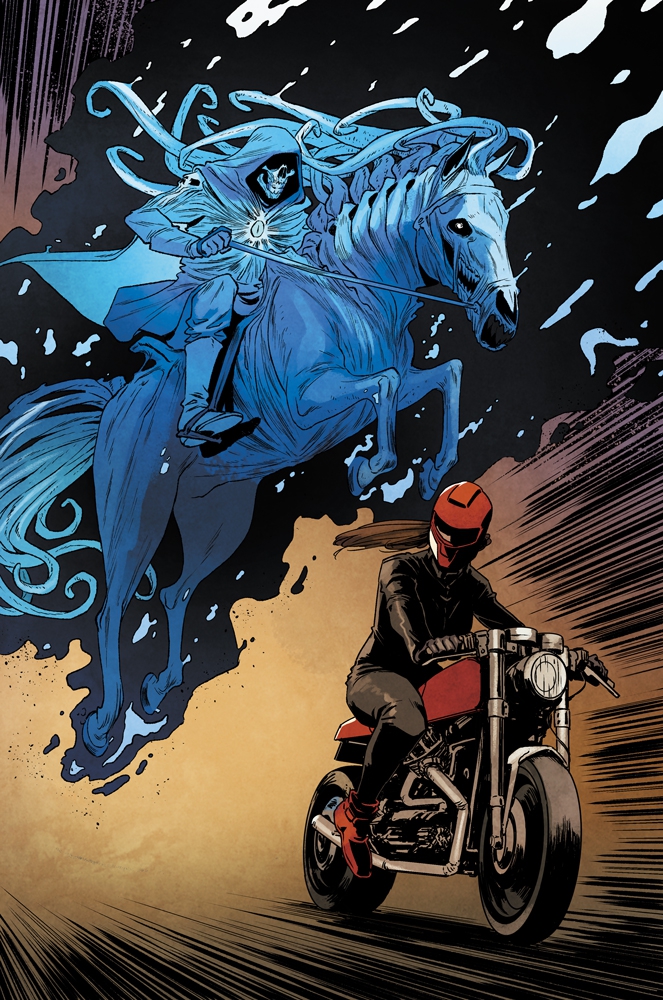 Cavan: It was only a matter of time until we did a street race, and issue six has it all, cars and bikes chasing through Rome in a true Bond-inspired travelogue. But we still had to make it suitably spooky. Cue our very own speed demon. That beast has some horsepower. 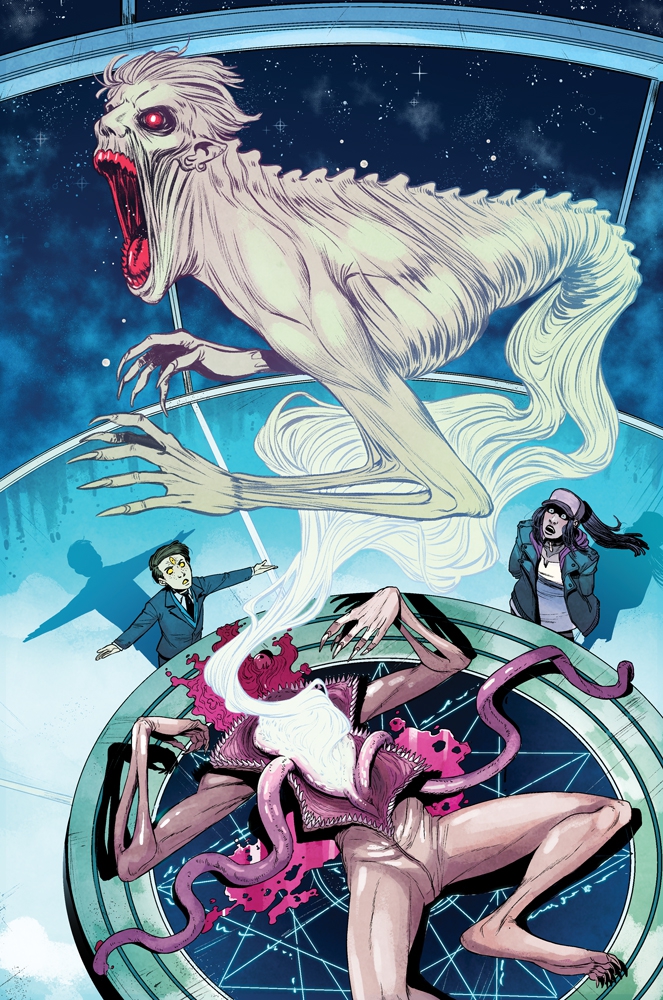 Cavan: Once Corin had given us a demon, I knew I wanted to see what she did when I challenged her to create a demon's ghost. Respect is also due to our amazing colorist, Triona Farrell, who brings so much to this book. She nails the atmosphere every single time. 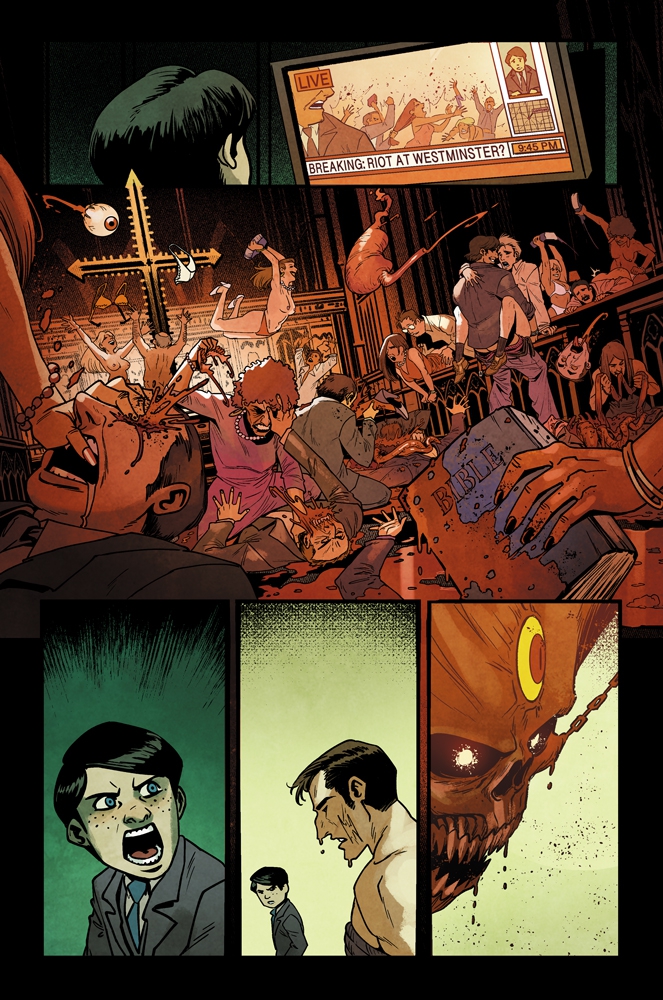 Cavan: This one probably has to be labeled as NSFW! Sodom and Gomorrah breaking out of Westminster Abbey as a Weapon of Mass Damnation is detonated in the middle of London.

Corin: I wanted it to be gross and raunchy but also kinda silly since there's just sex, blood, and violence everywhere. Cue myself drawing old ladies spanking dirty old men with the Bible. My dad called me in the middle of drawing, and the conversation went a bit like this:

Dad: "Hey sweetie, what are you working on today?"

Shadow Service Volumes 1 and 2 are out now.