Come play with us. 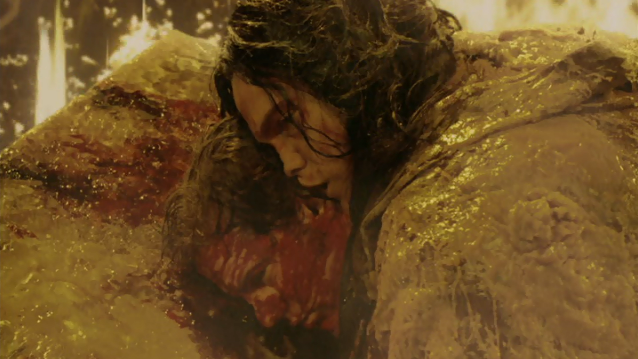 Editor's Note: Spoilers below, but the most recent film discussed is from 2005. You've been warned. Enjoy!

In recent years, horror's evolution has not only seen the final girl phenomenon alter to better relate to contemporary society, we've also witnessed the rise of "elevated horror." But certain aspects of the genre are tried and true, and today we are taking it back to an element that's existed in the genre long before the term elevated horror — twins in horror movies. There are many examples of this particular phenomenon, but can we call the horrors that have us seeing double an unofficial sub-genre? 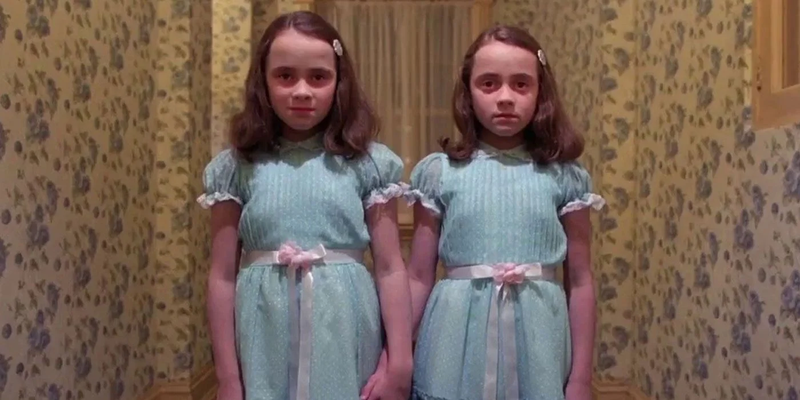 One of the first pair of movie twins I was introduced to when developing my passion for horror was the Grady girls. Portrayed by Lisa and Louise Burns, the sisters appear in Stanley Kubrick's The Shining, based on Stephen King's book of the same title. Kubrick masterfully executes the horror's premise. Jack Nicholson plays Jack Torrance, who travels with his wife, Winnifred, aka Wendy (Shelley DuVall), and son, Danny (Danny Lloyd), to the Overlook Hotel to oversee the building during the guests' absence. As time passes, Jack descends into madness, eventually attempting to murder Wendy and Danny.

The twins are closely connected to Danny and his titular "shining" - a gift of sensing spirits and ghostly presence. The twins make a brief, yet indelible appearance in the film when Danny encounters them during one of his routine bike rides through the Overlook Hotel.

"Come and play with us. Come and play with us, Danny. Forever...and ever...and ever." The twins' cryptic words reverberate as the audience observes Danny's frightened expression and a wave of blood spilling out of the hall's elevator. In one of the most famous scenes of The Shining, Lloyd wasn't supposed to know he was in a horror film; all of his expressions in this scene are on cue and executed purely out of his talent as he never saw what his character is reacting to.

There is a specific meaning behind the twins' presence solely in Danny's psyche. The girls were murdered by their father, who happened to be a bartender in the Overlook Hotel. Kubrick adds flashes of them seen from Danny's perspective; lying on the floor in puddles of blood. The boy relates to them and feels their sorrow. As the sisters invite Danny to join them, one thing comes to mind — do they mean it, or is their appearance meant to be a warning? Perhaps they're trying to protect Danny? Despite the sisters appearing in The Shining for just a short moment, the scene became one of the most memorable scenes from the film, cementing the Grady twins as classic horror icons. 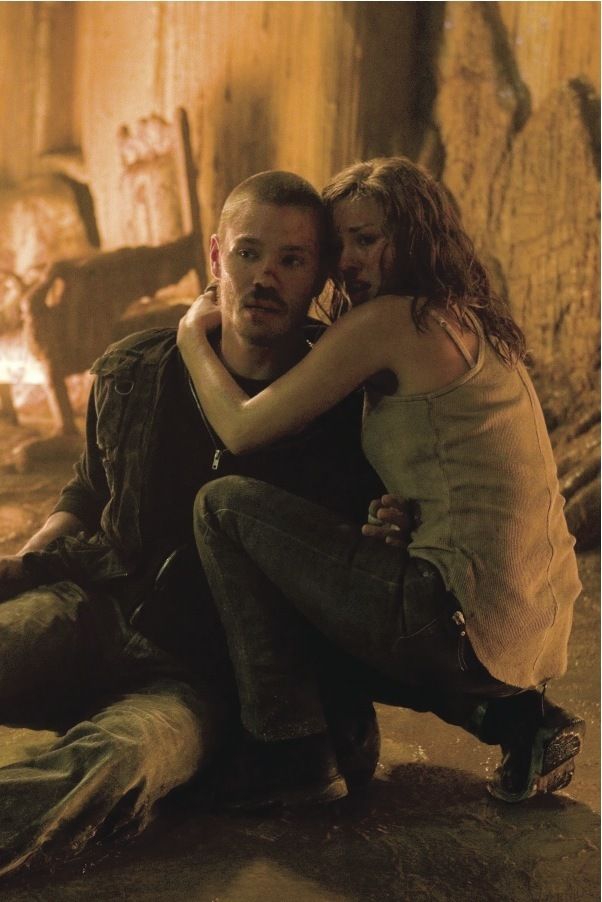 In the 2005 House of Wax remake, the presence of twins is also quite creepy though it differs from the portrayal of the Grady sisters. Based on an original film from 1953 of the same title, the plot of House of Wax follows a group of friends: Carly (Elisha Cuthbert), her twin brother, Nick (Chad Michael Murray), Paige (Paris Hilton), Wade (Jared Padalecki), and Dalton (Jon Abrahams) on a road trip as they happen upon an abandoned town. While they wait for the gas station owner, Bo Sinclair (Brian Van Holy) to repair their car, they decide to visit the town's wax museum where everything, including the building itself, is made from wax.

Despite it being a remake, the film by Jaume Collet-Serra is a decent entry for horror fans and those who love gore and naturalism. As the group explores the museum, a killer on the loose wants to murder them all. We come to find that the killer is Vincent, the deformed brother of Bo. Rather than existing as a paranormal vision, the Sinclair brothers are a flesh and blood embodiment of the evil twin/good twin trope. As the tourists are picked off one by one, the final battle culminates when the entire museum bursts into flames and melts. 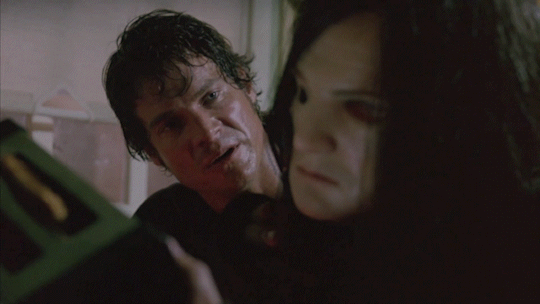 The film's bombshell reveals that Bo is in fact the culprit, not Vincent, as earlier presumed. Perhaps the creators wanted to leave the audience with a reflection. There is not one moment when Vincent is indicated as the perpetrator, yet it is likely (most of) the audience believes him to be. Utilizing the topic of villainizing deformity, it could be viewed as a commentary on society's stance and how easily we make assumptions, vilifying those who appear to be different from "the norm." 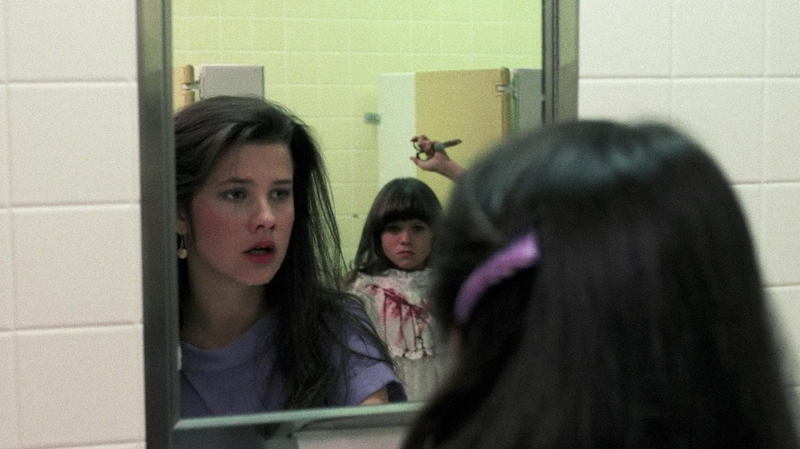 Larry Stewart's 1984 film, The Initiation, follows amnesiac sorority student, Kelly (Daphne Zuniga), as she is haunted by a terrifying nightmare of a man burning. Things get worse when the main character and fellow coeds, Marcia and Alison, are stalked by a killer in a deserted department store while conducting hazing rituals.

As the audience follows Kelly and her attempts to solve the mystery of the dream and partake in the initiation, the viewers discover that the killer is... her twin! Kelly's troubled twin sister, Terry, has been institutionalized since childhood. Kelly doesn't have any memory of Terry and is shell-shocked by the revelation. In an intense climax, the person who gave life to the evil sister also takes it away by shooting her to death.

There are many correlations between The Initiation and John Grissmer's Blood Rage from 1987. Similarly, we have the twins motif in a slasher, with one of them being the tormentor. 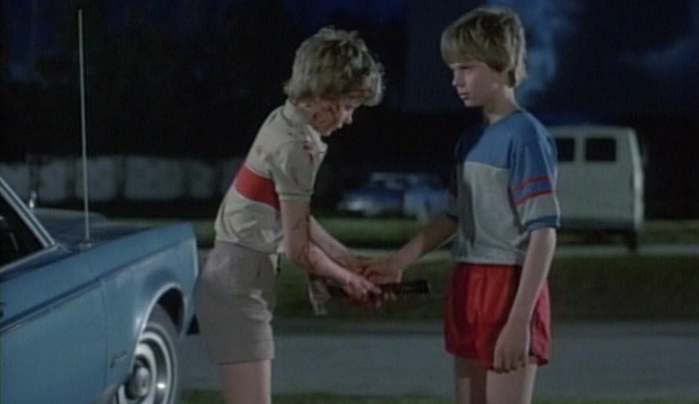 Blood Rage tells the story of the Simmons family — mother Maddy (Louise Lasser), and her twin sons, Tod and Terry (Mark Soper). Early on, the audience finds out that one of the twins committed an unspeakable crime and was institutionalized. When he suddenly escapes the hospital, the brutal carnage commences, revealing more details and leading to the satisfying yet gruesome finale.

The film's game is to keep the audience guessing — which one is evil, Todd or Terry? Was one of them in the institution mistakenly while the true killer lived as a free person? As the finale of Blood Rage approaches, these questions are addressed; the evil twin was living free all along while the innocent soul suffered in captivity. Slasher fans will undoubtedly appreciate Blood Rage and its cheesy script, exaggerated characters, and campy atmosphere. 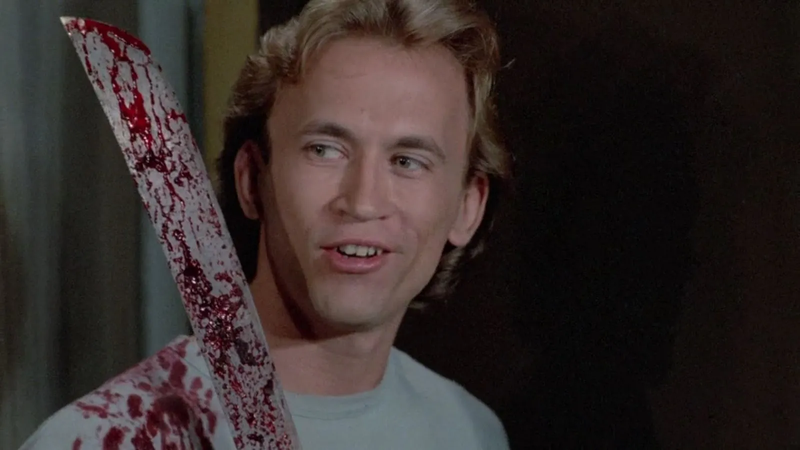 Whether it's The Shining or Blood Rage, these evil twin titles remain gems — some hidden or underrated, and some of them tried and true classics. The phenomenon of twins in the horror genre may not be its own sub-genre entirely, but these films deserve a special place on the horror fan's shelf. While the good twin vs. evil twin trope may run rampant, there are worthwhile entries. Seeing double adds terror to the plot, especially when the audience is uncertain as to who the true villain is. The twin horrors featured above are great options for horror fans. Even better if it's a double feature.