The exclusive premiere of Brett’s newest animation for ALTER plus an interview with the animator and filmmaker about his process, issues with the UK’s folk horror revival and the beauty of interdisciplinary work. 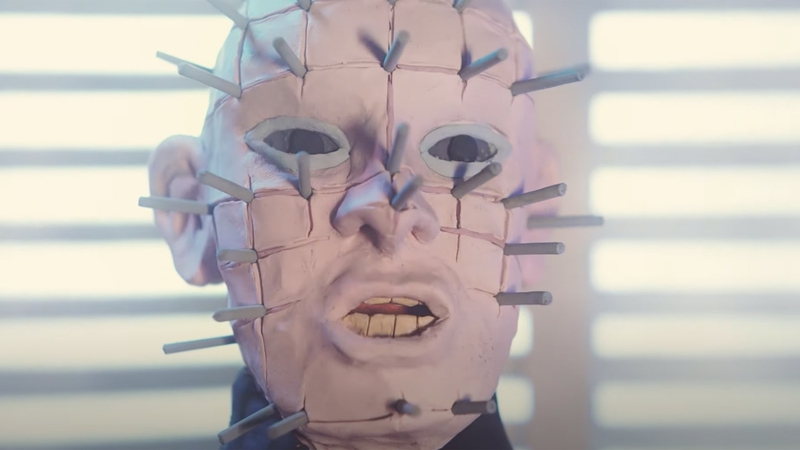 Joseph Brett is a Dr. Frankenstein of sorts. He reanimates lifeless objects through stop motion animation, a form ideally suited for horror due to its natural ability to live in uncanny valley. By recreating iconic horror scenes in claymation (which he has done for ALTER and DUST), he makes favorite moments feel new again. Whether it be Michael Myers rising behind Laurie, the bees flying out of Candyman’s mouth, or Casey’s finale with Ghostface… the results are a blend of beauty, charm and terror that only the human touch could produce.

To pick the brains behind the clay, I chatted with Joseph about his love for horror, animation and his ideologies around using genre as a vessel for social justice.

I read that you started animating when you were ten years old?

Yeah, my mum’s a teacher and she borrowed a camera from school over the summer. I grew up watching this company Cosgrove Hall; they did The Wind in the Willows animation. I had old videos of a British show called Trap Door. It was really chaotic. What’s really cool about stop motion is when you’re looking at it, you’re aware of the physicality. You immediately want to interact, because you know they’re real. So when you’re watching stuff as a kid, you’re like, ‘Wow, I know that’s a real model somewhere.’ I throw a lot of animation workshops, and kids just love animating because it’s not abstract, it’s right there in front of you.

And you actively avoided plasticine for a while?

There’s an animator called Jan Svankmajer who animates with meat. He did this crazy animation of Alice in Wonderland, just called Alice. I started watching Czech animators and went through a phase of just thinking, what’s the most awkward thing I can animate? Can I make stuff out of paper? Can I animate books? Just avoiding plasticine. I can’t remember why I went back to it, but I thought it’d be cool to try out some clay again.

How did you get into the horror recreations with clay?

I love horror and there are really iconic shots. The first shot I ever did was from Suspiria. I did it because it was coming up on Halloween and I’m a big fan of doing stuff without any real intended purpose, because it makes you quite free with your creativity. It’s the idea of being like, ‘How could you do that but with plasticine? How can you do a scene with intense anxiety in a cab with vibrant colors shifting around rain falling down? Could you do that with the stuff I was animating with when I was ten?’ It was fun to play around with it. Then I did a few others, basically.

What makes you decide on which iconic shot to recreate?

Originally it was thinking about what shot scars you and imbeds itself into your mind. Also, what would be fun to see in clay. This was quite nice for the Twin Peaks stuff as well, because that’s such an iconic series. To see that translated, it reinvigorates the image. I’m usually like, ‘My work is terrible!’ but I really like the shot of Dale Cooper in plasticine because you know that shot so well. You’re getting to see that shot, but it’s not that shot, so you get this buzz from it.

Which clip was most challenging to make?

They’re all difficult in different ways. The other day I animated this shot from It Follows where he jumps through, which is really difficult because you’re trying to animate through the doorway. The shot of Sadako[The Ring] coming out of the TV is really interesting because you have to vaguely recreate a two-dimensional screen transitioning into something three-dimensional, and try to make them joining feel natural. It’s usually things that are quite natural in the real world that should be simple, like a hand coming out of the water in the Terminator shot. It’s like cool, you dip it in but when everything is solid, suddenly that becomes really challenging.

I thought about that for the Nightmare on Elm Street clip. It’s a lot of prep. Can you walk us through how you make one?

I look at the original shot and figure out what’s interesting. I do things at different scale depending on how much detail there is. How you’re making the model depends on what you’re planning to do with it. I just did one from Jennifer’s Body and she’s got a hole in the back of her head because the tongue has to come through her mouth. I spent ages lighting it because I really want it to look exactly like the shot, obsessively, and that’s part of the joy in it for me. How accurate you can get it. Then you get into the right headspace after that to just drone for four to eight hours.

It’s so much work and then it’s like, cool that’s two seconds of footage. I have a theory that effort always shows up on screen. Animation is a really good example of that. That’s what’s satisfying when you watch it. You see this absolutely pointless amount of work just condensed down into this tiny little thing. They’re like jewels in that way.

There’s a huge misconception about how long stop motion takes.

I know, it’s insane! I did a short film for all of lockdown and someone asked ‘Oh, is it like a feature?’ I said, ‘No, it’s seven minutes.’

Do you want to make a stop motion feature?

I’d love to, but I love doing live-action stuff as well. I’m really into social commentary and it’s very difficult in some ways to do that when the duration of making it becomes so long. There’s limitations to it in that way. Not to trash social animations, it would have to be the right project and know that in ten years’ time it will still be something I’m happy to be putting out.

I was looking at your production company, Jackdaw Films. There are themes of social justice being British East Asian. Can you talk about its conception?

Jackdaw is me and my partner, Bec [Boey]. The first short film we made came out from Bec being frustrated with the casting situation of being an East Asian in the UK. We made this satirical short film about a Chinese takeaway with expectations put upon from the white interviewer, and I play on those dynamics.

In the UK there is a folk horror revival taking form. There’s something intrinsically problematic about how we’re reviving a lot of those traditions because they were quite racist. They come from the ’70s, it wasn’t a great time for racial equality and representation. The only black man in a Hammer horror film is playing the devil as an extra. It’s terrible.

What we’re trying to do with Jackdaw is make horror that is theory-led in ways that represent our desire for social progress that incorporates the genres we’re working with. Utilizing those nostalgias and expectations to incorporate into the message.

That makes me think about your short, Stones.

That’s a prime example because it’s exploring home and landscape. The two leads in that are East Asian as an inherent presence, but it’s not about that. There’s an intrinsic sabotaging with the folksy good-old-England aesthetic of the stop motion films we all watched when we were kids. I think racism in the UK works in a different way to the states, because people don’t think it’s there. In a weird way, putting non-white people in certain settings becomes quite a revolutionary act in itself. That’s what we’ve been exploring and what Stones does a little bit.

You have an eclectic portfolio of documentary, live action, music videos and stop motion. Do you feel like these all inform each other?

Definitely. There’s a demonization of being a Jack of all trades and master of none, but creativity is a dialogue between different things that you do. Often the best way to make progress in one area is to spend a little time in another. How those disciplines inform each other can breed a lot of development in terms of your work and what you’re able to do.

In one of the Hellraiser shots that I’ve done, I think, ‘What is the background here? There’s some blinds, they’re in a hospital room.’ What’s nice about doing these is you really focus on the films, take them apart and put them back together again. There’s an intense studying of other people’s work. That fascination is what got me into it.

Last question for fun. What’s a horror character that you relate to on a spiritual level?

There’s this shot at the end of The Hills Have Eyes, the remake, where he’s just murdered a load of people, covered in blood, and he’s got this ax. He’s just panicking, somehow has just come out of the other side of this absolutely feral clawing at surviving. I think because of some of the work I do, I come out the other side thinking, ‘I’m still here…’ [laughs]

You can find Joseph’s horror recreations on his Instagram and his stop motion horror short, Stones, here. The interview has been edited for clarity and brevity.

Throughout the month of October, ALTER will be releasing thirteen new iconic horror clips from Joseph Brett.