All the pieces are in place for AMC's forthcoming series adaptation of Anne Rice's immortal classic. 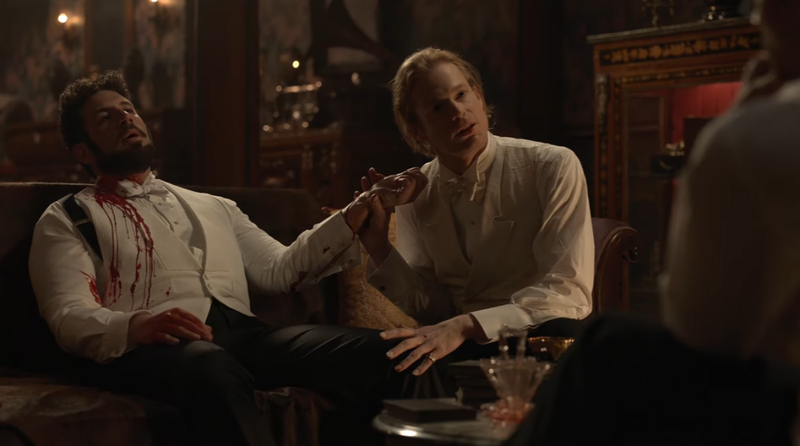 We've known for some time that AMC has been hard at work on a new series based on Anne Rice's legendary 1976 novel Interview With The Vampire, and today we're getting what may be our best look yet at what they've come up with. Let's take a look at the trailer and see what we can see...

Hey, this looks pretty cool! From where I'm standing, this seems to be doing all the basic things an Interview With The Vampire adaptation should be doing: you've got your Louis (Jacob Anderson), you've got your Lestat (Sam Reid), you've got your near-1800's New Orleans in all its sweaty, steamy glory -- hell, you've even got your titular interviewer, played here by iconic stage and character actor Eric Bogosian. The board's been set!

More importantly, however, we're getting a very good look at the budget AMC's laid out for this series, which appears to be substantial. Everything here looks appropriately luxurious, from the well-appointed sitting rooms to the gorgeously-constructed streets of NOLA. Costumes are looking pretty damn sharp, as well, and it's encouraging to see (albeit very briefly) that this series seems to be keeping the homoeroticism in Rice's novel firmly intact. If you're gonna adapt Interview With The Vampire, you better make damn sure you're getting it right. This is not the property to fuck around with Anne Rice fans on.

The series comes to us from playwright and television writer Rolin Jones, whose previous work on television include's HBO's Boardwalk Empire, Showtime's Weeds, and NBC's Friday Night Lights. It'll start rolling out on AMC on October 2nd (just in time for spooky season!), and definitely does not represent the first time this property's been adapted for the screen: in 1994, Neil Jordan directed a feature adaptation of the novel starring Tom Cruise, a young Brad Pitt, and an even younger Kirsten Dunst, and was followed roughly a decade later by an adaptation of the third novel in Rice's Vampire Chronicles series, Queen of The Damned. The less said about that one, the better.

Should AMC's version make fans happy, there's a chance this series could go on to become the most complete adaptation of the Vampire Chronicles yet attempted. Here's hoping that turns out to be the case!