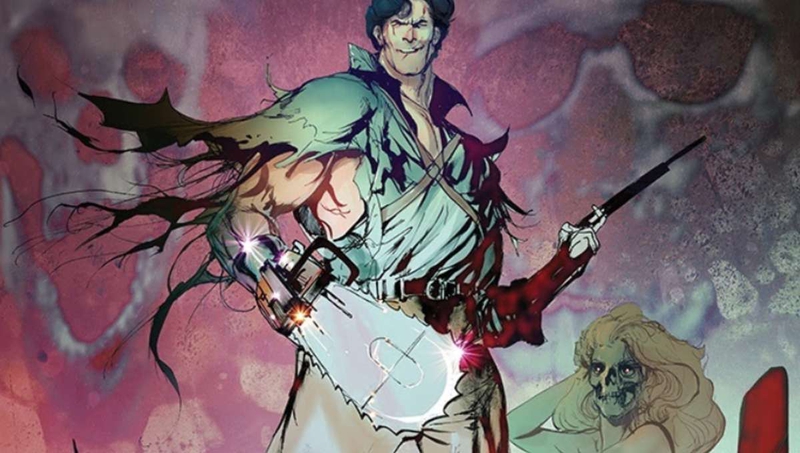 Grab your shotgun and screw in that chainsaw hand tight! The Deadites are back, and this time they've set their sites on NewYork City in the late 1970s. Expect graffiti, street rumbles, and gallons of blood as Ash Williams is sent back to 1979 to confront a street gang that has gotten its hands on the Necronomicon and taken their gang war to the next level. Out of his depth, as always, and without a friend in sight, Ash finds himself in an urban fantasy of frightening proportions.

In Dynamite Comics' Army of Darkness 1979, Rodney Barnes, creator of the Eisner Award-nominated vampire comic, Killadelphia, and artist Tom Garcia, who had such sights to show us in Hellraiser: The Dark Watch, have teamed up to take horror icon Ash on a new adventure, one that will test him in new and unexpected ways, and force him to come to terms with why these encounters with the Deadites keep happening to him.

FANGORIA talked with Barnes about his new comic series, the first issue of which hit stands and digital stores September 8th, his history with Sam Raimi's Evil Dead franchise, finding Ash's voice, and how horror comics have changed over the last few years. It's absolutely groovy!

What was your first experience with the Evil Dead franchise?

The movies! I really dug the movies. I thought Ash was a really fun character. I'm not a huge fan of funny horror, gore stuff, but I thought what Sam Raimi did was really done well. When the opportunity came to write the book, I thought this should be a challenge because Killadelphia is so serious. My Star Wars stuff is really serious. So, I said, 'let me see if I know how to have fun [laughs]! I figured I'd take a crack at this and see what happens.

Tell me a bit about how the project came together.

Dynamite reached out to me and asked if I'd be interested in the project. I hadn't watched the movies for years, so I did a deep dive into the movies and the books they had already done. And I asked myself, 'what could be different here?' They've done everything from Ash against Dracula, Ash teaming-up with Obama. They've done a million things with him. I had just watched the movie The Warriors (1979), so I said, 'what if one of the gangs from The Warriors had the Necronomicon?' That would give them a certain amount of power, and Ash would have an antagonist immediately. I parodied some things from The Warriors and plotted some things from Ash and his adventures, and here we go!

The Warriors was one of the things I was planning to ask you about. The Walter Hill influence is very clear in your book. I'm curious, was choosing 1979 as the setting born out of wanting to tie the comic to The Warriors?

Yeah! And you had that period of time with movies like Escape From New York (1981), which I call the 'burning trashcan era.' You had the burned-out cars of the Martin Scorsese movies, and that gritty idea of what New York was. I'm from a small town in Maryland, so anytime I saw a movie that had New York in it and depicted it like that, I was like 'wow, when I get to New York, this is going to be a scary place. Concrete jungle.' And while the real place was nothing like the New York from those movies, those images were cemented in my mind. So, I figured I'd take a crack at playing in that place for this book. 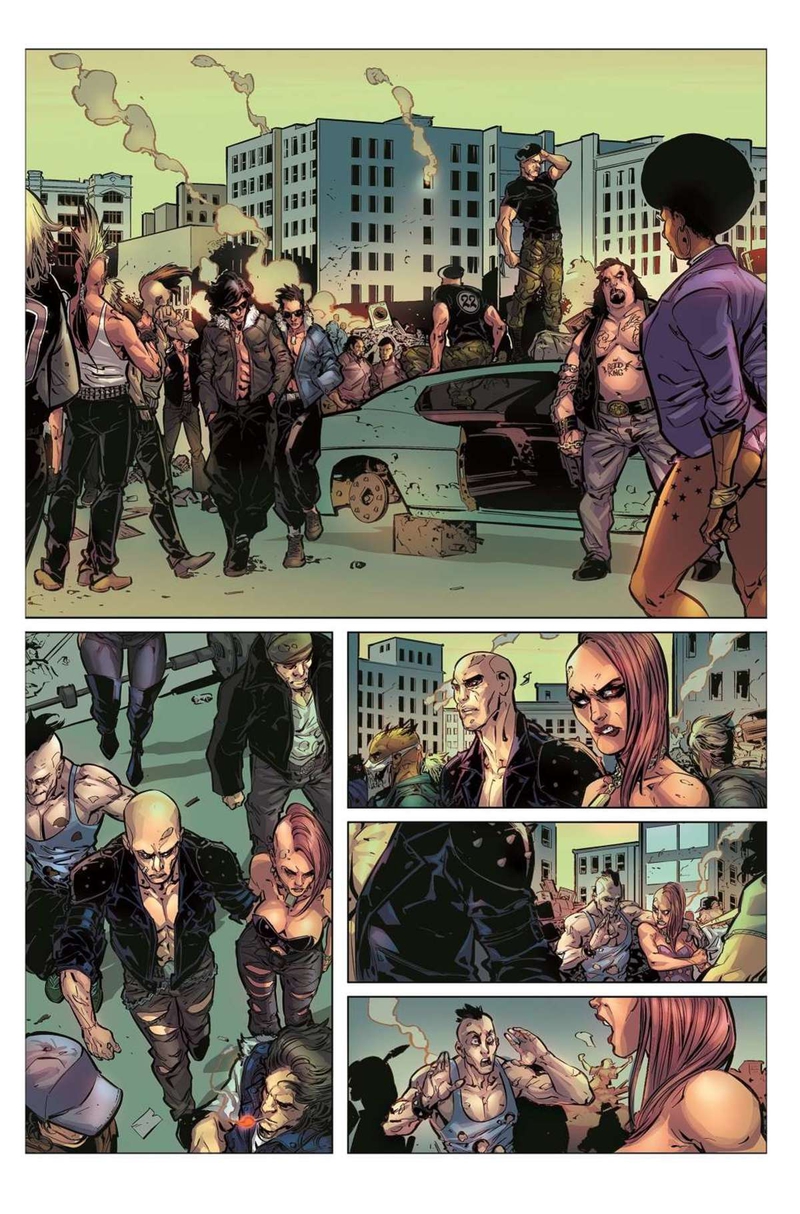 You mentioned that Army of Darkness 1979 provides you an opportunity to have a bit more fun and tap into your comedic side. As someone familiar with your work on Killadelphia and some of your other books, you usually tap into some pretty heavy subjects. Was there a period of adjustment in terms of finding your voice for Ash?

Well, I started my career in sitcoms. I've written a lot of stand-up for people like Chris Rock and others, so it was just a matter of writing the story in such a way that I know, in the back of my mind, that a joke is coming. And really, character-wise, Ash is funny just in terms of the way that he sees the world. It's sort of baked into the character. It's not so much writing jokes perse, as much as it is trying to get the most out of Ash as a fish out of water.

The book begins in 2021. I'm curious, did you check out the Ash vs. Evil Dead series as part of your research deep-dive?

Yeah! I've got two shelves full of Ash all over the place!

Given that there have been so many Ash-centric stories in different mediums, and fans are always hungry for more, what would you say sets Army of Darkness 1979 apart?

Even though it's comedy and genre blended together, there is some degree of thoughtfulness in terms of Ash's characterization and considering why this keeps happening to him. To me, it was surprising in all of these adventures that he keeps getting sucked into a portal, goes to a different time, and does what he's supposed to do. And he never really questions it heavily, that I've seen. There's a moment where he asks himself, 'why am I doing this? Why is this happening to me?' He's a little bit more self-aware. To me, that gives him a little bit more grounding so that it feels there's an immediacy to the story that I think sometimes, when it's just for the jokes, may not be there in the same way. I try to still make it fun in the way that people have come to know Ash, but still a little bit more plot-driven and grounded in terms of Ash as a character. 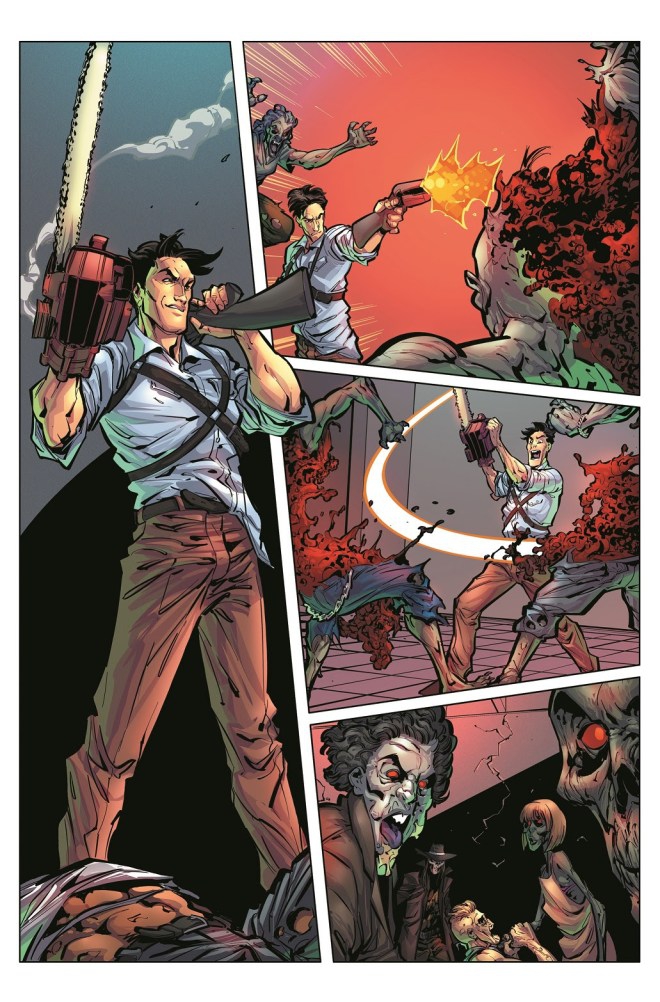 Tell me about your collaboration with Tom Garcia. How do you adapt your writing to his style or vice-versa?

Tom's art is really action-paced. There's a lot of life to it. And because there's a lot of life to it, I try to write kind of like I'm writing for animation. Everything moves. There's not a whole lot of exposition perse. I try to get the exposition in through the dialogue and through movement. But in a book like Killadelphia there's a lot of heavy exposition and a lot of dialogue. Here, with Tom, I try to let his art breathe because there's so much movement. And I think that's what the fans have come to expect from Tom, and Army of Darkness as well. So, the idea is to let him take center stage and try not to belabor his beautiful art with my words.

Horror comics have really taken off over the last several years. They've always been there, but there are a lot more now. I want to get your thoughts on how the comics industry has shifted. There's a lot of talk right now about Substack and print vs. digital. I'm curious about how that has affected the number of horror books we're seeing recently.

I just started my Substack the other day. I think the thing for me is The Big Two [Marvel and DC] don't really do horror in the same way that they used to in the '70s, where you had your House of Mystery, and Vertigo. They pop up from time to time still. I know Joe Hill had his run at DC. And the stuff they're doing now at DC's Black Label with horror stuff is all really, really great. But horror really sparks in the independent realm because you really get to capture folks' voices. They feel a bit more like passion pieces, rather than just books that are coming out monthly. And I think this is that renaissance time. There's a lot of stuff that's going on in the world right now, and horror speaks to that. If you think about the period of the '70s with George Romero, Wes Craven, and guys like that, they made movies that really reflected what was happening in society. And I think you have a lot of books now that speak to that in the present day. Jeff Lemire's books, for one. They speak to this idea of cynicism in society. And my books speak to society and culture. It's a great time to be talking about the world. You get it in polarized voices sometimes in the mainstream media, and in film sometimes, but in comics, you just have such a broad reach and so many different creative voices. There's a lot of really beautiful stuff.

One of the things I really appreciate about your work is how you push things into a political and social conversation through horror. Even going back to your Falcon book at Marvel, which while being a superhero book, dealt heavily with demons, gangs, and vampires. You manage to take popular characters or well-known spaces and make them a delivery system for important social commentary. Are we going to see any of that in Army of Darkness 1979?

There's some of it in there, and you see little glimpses here and there, but because of the nature of what the book is I try to go more for sentiment and nostalgia. If you're old enough and you remember the '70s and loved those types of movies, I play more to what those times felt like. I'm giving my age away here [laughs]. It's not so much horror in the classic sense of what we're talking about right now but more of horror in the sense of fun like the Evil Dead movies or The Return of the Living Dead (1985).

What can you tease readers about what's coming up in the series?

Ash is going to find a lot of obstacles. He may find love in that Ash-y type of way [laughs]. My headline is: fun! You're going to have a lot of fun. And by the end, hopefully, you will find a more thoughtful, purposeful Ash, but not to the point where it's belabored.

Anything else you want to plug that we didn't cover?

In the horror realm, Blacula is coming. I've got Zombie Love Studios coming for more horror books. More Killadelphia. And in my Substack world, more horror, and the Killadelphia world will expand to zombies and demons, and lots of cool fun stuff!

I'm very excited about Blacula. I'm a big fan of those movies, so I'd love to chat about that next year when it hits the shelves.

Thanks! There's another book that's coming as well from my place called Crownsville. It's set in the first Black mental asylum in America that was in my hometown. It's a ghost story, kind of like The Shining. Very serious, very hardcore horror, and I think that will be a lot of fun as well!

This interview was edited for length and clarity.