It's A Jungle Out There: 5 Horror Films With An Exotic Setting

Welcome to the jungle, we've got thrills and monsters.

When it comes to quintessential horror settings, there are a few that will eternally reign supreme: the dilapidated haunted house, the abandoned hospital or asylum, and of course, the cabin in the woods. The forest, in particular, has risen as the unofficial king of the horror setting, showing up in countless films, TV series, and campfire ghost stories for as long as any of us can remember. It's an obvious go-to for anyone seeking out environmental horror, but what about those lesser-seen settings, for when you're looking for something a little more perilous?

A largely underappreciated locale categorically teeming with chilling possibilities is the shadowy, obscure recesses of the jungle. Ancient ruins, snarling vines, poisonous creatures, and treacherous terrain are all brimming with horrifying possibilities. So why is this not seen more in horror? It could simply be the challenges and constraints that come with filming in such remote and inaccessible locations, or the fact that the aforementioned backdrops more frequently come to mind for creators. That doesn't mean there aren't great jungle-centric horror selections out there, though. So grab your torch, put on your fedora, and join us as we explore some of the best examples. 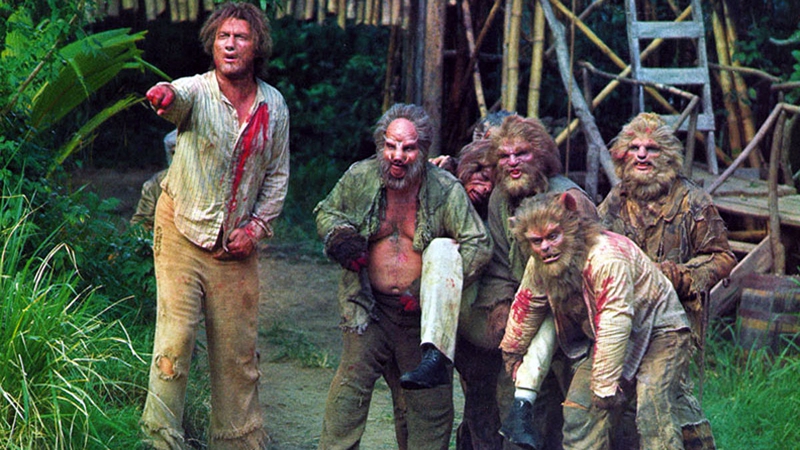 The Island of Dr. Moreau is one of the earliest and most infamous examples of a mad scientist and his hideous experiments, containing a plethora of anthropomorphic hybrids secluded in Moreau's "House of Pain." Based on the 1896 novel by H.G. Wells, it's the follow-up to the 1932 adaptaion, Island of the Lost Souls. While there is also the 1996 version starring Marlon Brando, this iteration (with Burt Lancaster as the sadistic Moreau) remains the most revered, having gained near cult status. Michael York plays the shipwrecked Braddock, who has the misfortune of being "rescued" by Moreau, only to find himself entangled in the horrific events unfolding with the Doctor's twisted menagerie.

While the jungle itself is more of a backdrop than an actual antagonist, it provides an overwhelming and unavoidable sense of isolation. Once the threat of becoming one of Moreau's half man, half beast amalgamations becomes a reality for Braddock, he's faced with not only having to fight off the crazed Doctor and his hybrid monstrosities, but also finding a way to escape. The threats in this island jungle may be largely man-made, but that doesn't take away from their utter creepiness and the shocking concept behind what's happening amidst the lush greenery and crystal blue waters. 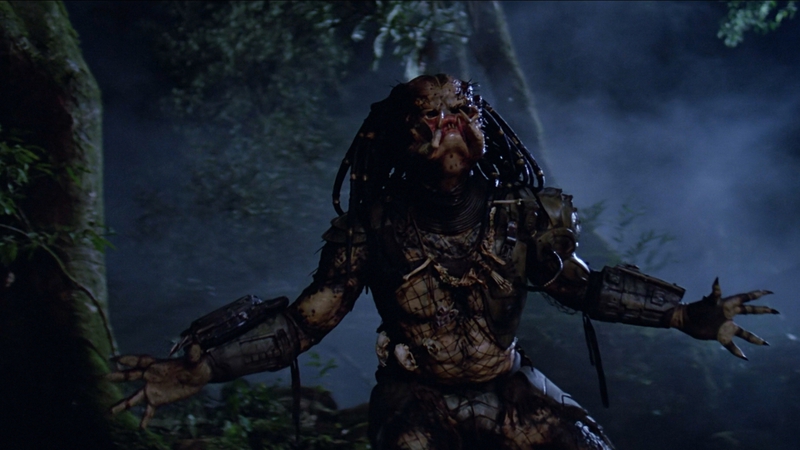 While some may classify this as more of an action film, the fact remains that the Predator is one of the most iconic movie monsters of all time. This 1987 flick spawned numerous sequels and countless comic books, toys, video games, and novels, making it one of the most profitable franchises in horror. Not only does it star Arnold Schwarzenegger in one of his most memorable (and quotable!) roles, it also perfectly blends action, sci-fi, guerilla warfare, and creature horror all against a Central American jungle backdrop.

The concept is admittedly straightforward: a team of elite paramilitary soldiers is sent into the rainforest to rescue hostages in guerilla-controlled territory. As if that wasn't treacherous enough, they soon discover they're being stalked by an alien life form capable of thermal heat detection and armed with a cloaking device that renders it undetectable. Taking into consideration the inhospitable terrain of the jungle, combined with the fact that the Predator uses the dense umbrella of trees to move around unnoticed, it's the ideal setting for true jungle terror. The Predator itself is an intimidating and foreboding creature no matter where you place it, but in an environment where it can utilize the terrain to its advantage, it becomes frightening on an entirely different level. It also features groundbreaking makeup effects that still hold up today by legendary artist Stan Winston. Speaking of him… 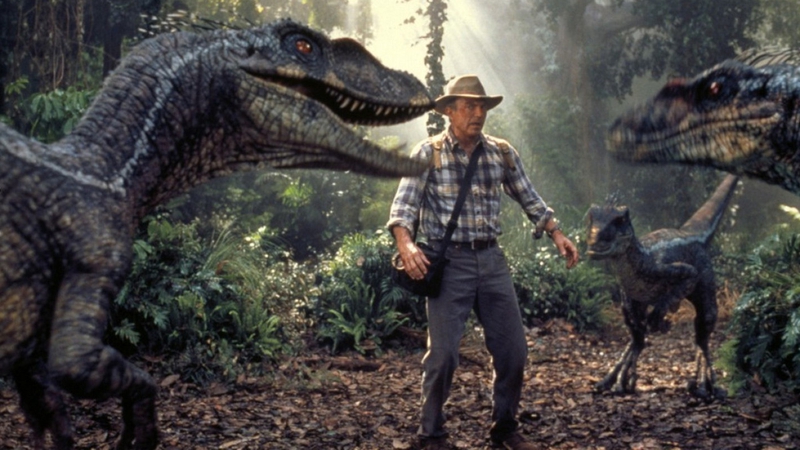 Winston's work on bringing the dinosaurs of Jurassic Park to life is one of the standout points of the entire movie. There are the obvious moral quandaries that add to the story's theme, making this part sci-fi adventure and part horror. Yes, this is a film centered on science gone awry, but the setting itself shouldn't be ignored. This is another situational storyline where the characters are placed in an unwelcome, wild environment that makes their predicament all the more insurmountable. For Dr. Alan Grant and the rest of the visitors, running for their lives from genetically engineered prehistoric beasts is already a nightmare scenario.

When you combine that with being forced to navigate the harsh, unforgiving Costa Rican jungle, it's the perfect storm of insurmountable obstacles. It's partly why, when the formula changes in subsequent films (dinosaurs in San Diego, anyone?), it loses part of that overall sense of dread.

The Ruins utilizes the jungle and its environment as the villain more than any other movie on this list, fitting squarely in the natural horror subgenre. It's as much a cautionary tale as it is a scary story, chock full of scenes where characters do exactly what they shouldn't, then subsequently pay the price. It should go without saying that if you and your friends are on vacation in Mexico and are asked by a stranger to help find his missing friend in the ominous ruins of a Mayan temple guarded by angry villagers, you probably should take a pass. Unfortunately for our hapless group of adventurous tourists, they don't think this through and venture into the temple despite numerous red flags. It's not long before they're in too deep (literally) and forced to fight for their lives against cursed, debilitating vines, as well as those murderous locals. If ever there was a movie that could be the poster child for how scary the jungle can be, this certainly fits the bill. It'll make you second guess booking that adventure tour on your next vacation and instead opt for the safety of a well-inhabited beach. 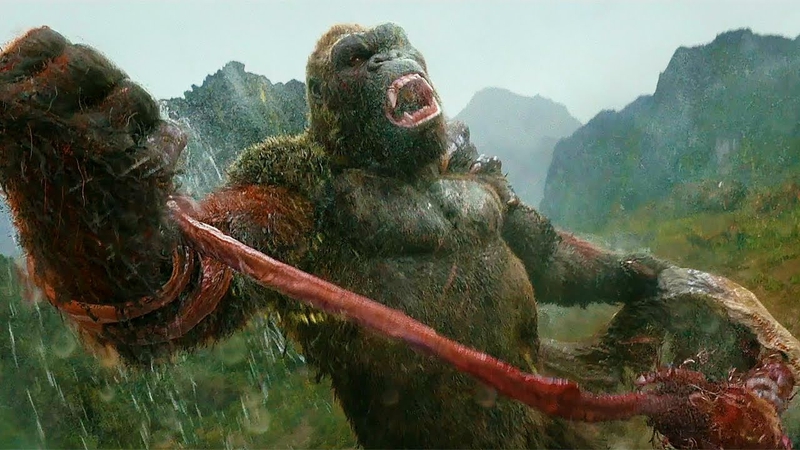 It may seem puzzling to include this 2017 adaptation to the King Kong franchise instead of the original film, but Skull Island centers more on the environment Kong hails from than any other. The movie explores the fact that the jungle Kong calls home is full of dangerous creatures and peril, including a reptilian species called Skullcrawlers, who have killed all of his family except for him. When a government organization travels to the island and begins conducting various experiments, they open up a veritable can of hellish worms as they're forced to contend with Kong, protective natives, and the other beasts that inhabit the jungle. It's a full-on adventurous romp through a lush, exotic setting with one of the most recognizable horror creatures in movie history.

Even though this list merely scratches the surface of the jungle horror subgenre, it remains an underutilized setting with serious scare potential. Sure, anyone could sit down to indulge in adventure classics such as Raiders of the Lost Ark, Romancing the Stone, and Tarzan to get their fill of vine-swinging, treasure-seeking thrills. If it's genuine scares you're looking for, though, try some of the entries on this list for a movie marathon that mixes natural elements with mysterious, chilling creatures. They might just make that cabin in the woods look a lot less foreboding.