Miami magic, movies, and moisture served up with a whole lotta love. 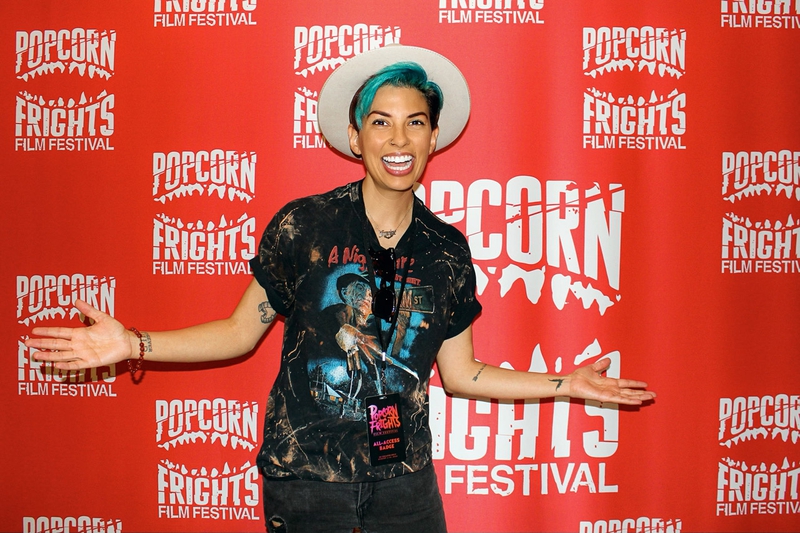 There are few places you can go to find the level of heart, passion, and gumption found at a film festival. Spend more than a few moments with any of Florida's Popcorn Frights film festival organizers or volunteers, and you will find the heart of the fest. It's a small but mighty organization with an aim to put Miami on the map for genre fans. Established in 2015 by Miami locals (and now best friends) Igor Shteyrenberg and Marc Ferman, the fest has quickly grown into the leading international genre film festival in the Southeast United States. After attending, it's easy to see why.

For the first time ever, Popcorn Frights Film Festival took place over two weekends in two separate locations. The first weekend in Fort Lauderdale included Follow Her, My Life With Chucky, Swallowed, and Tiny Cinema, among a weekend filled with features. 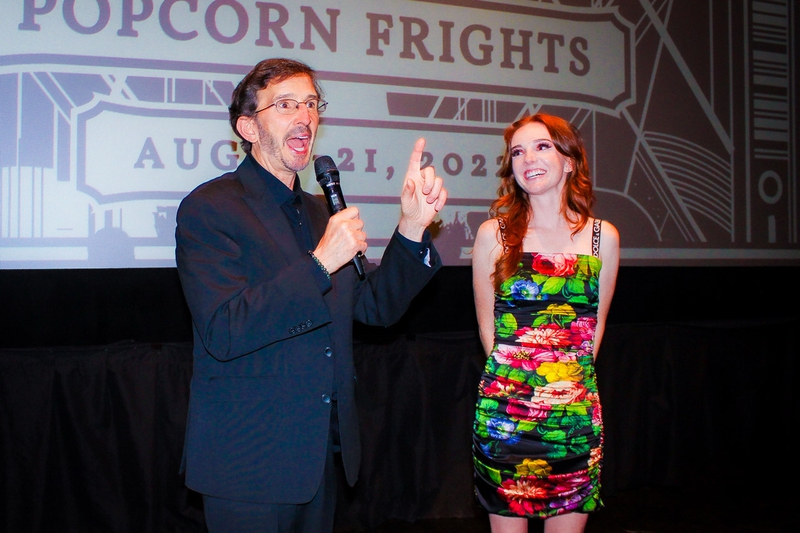 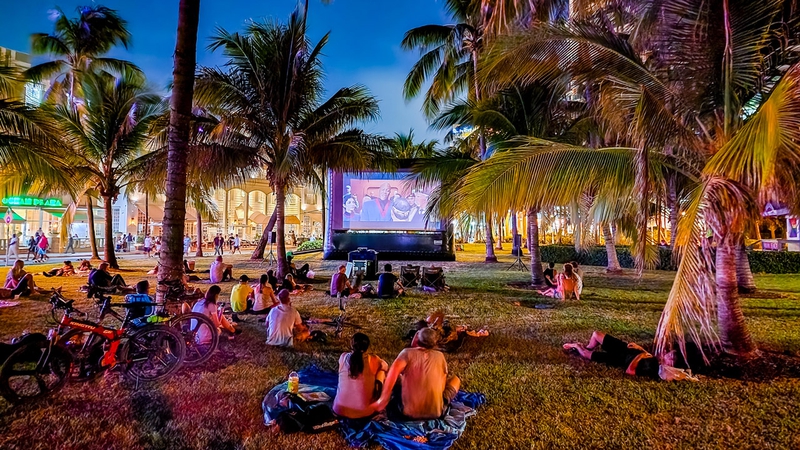 The second weekend kicked off with an outdoor anniversary screening of The Fifth Element.

And then I arrived.

My first night in Miami started with co-hosting a horror trivia event with the ALTER team and Monster Squad leader, Andrew Gower. Intimate, interactive, and fun as hell. But there could only be one… winning team, that is. The winning team of one: Steve. Steve emerged triumphant in a showdown of Steve vs. the whole damn theater. We could clearly hear the collective groans when teams were unsure of their answers in the dimly lit auditorium. And then there was Steve. Humble, quiet, really, really good at horror trivia. It came down to a sudden death round, and there was nothing sudden about it as the most humble hosts dug a little too deep for those tie-breaker questions. And then finally, after a few stumps, a winner triumphant. Congrats, Steve. 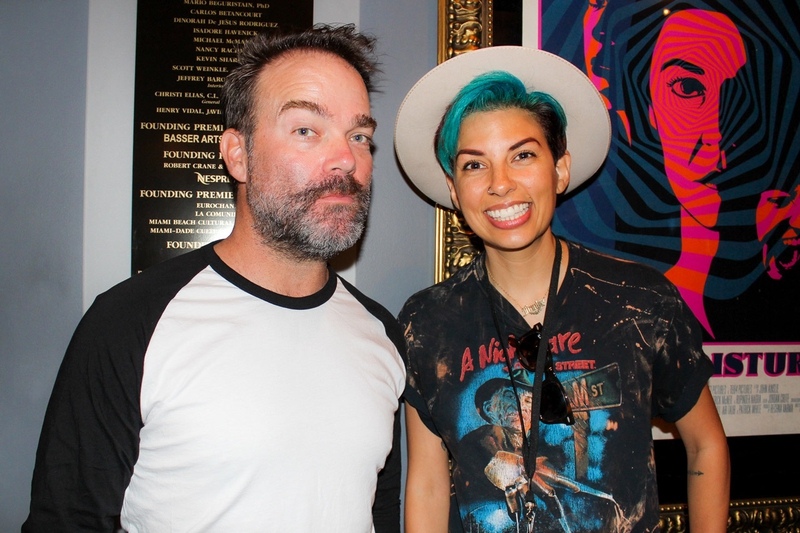 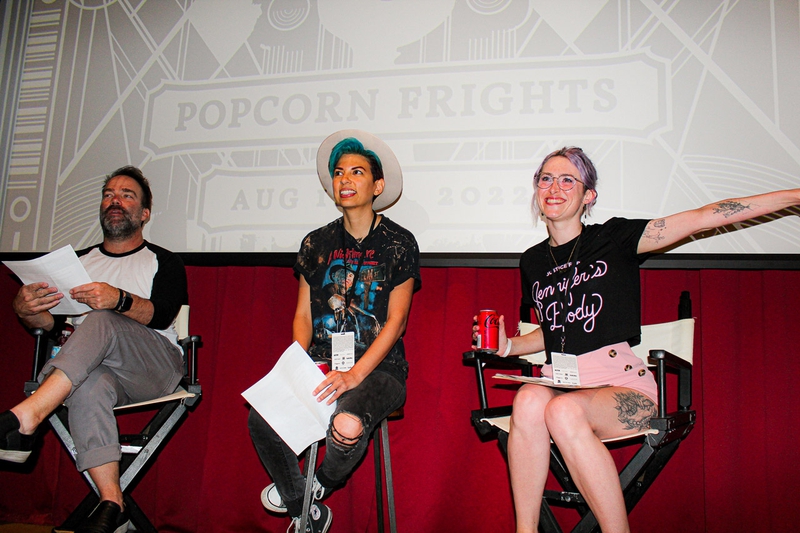 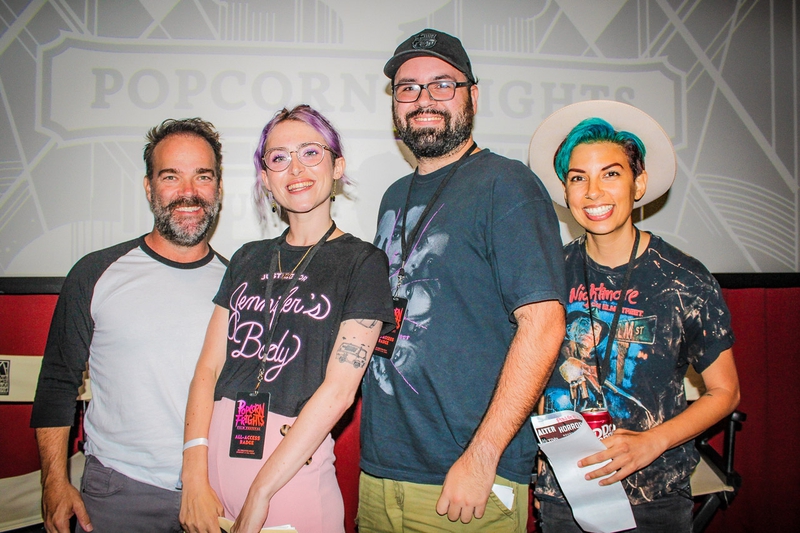 The energy was palpable, sage advice was doled out. Trivia winner and Miami local Steve asked about making the move from page to production, Jonathan (My Heart Can't Beat Unless You Tell It To) Cuartas offered his help. Boom. Magic being made, connections fusing, networks growing! 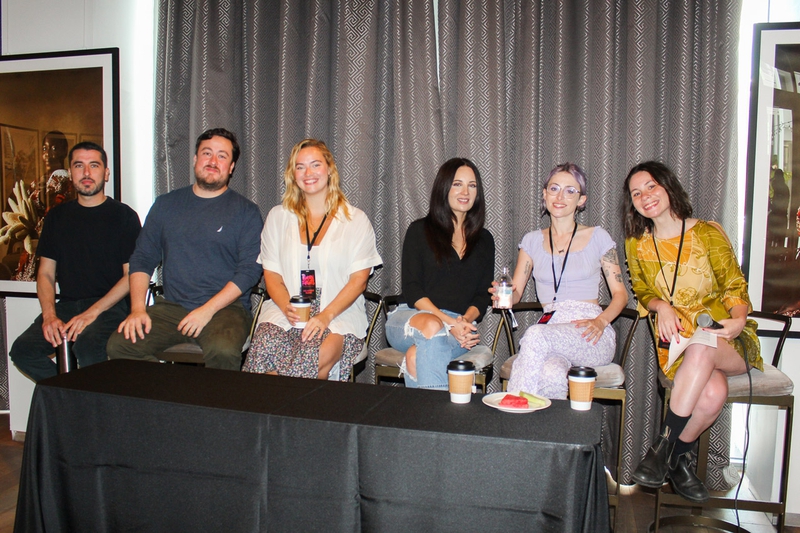 This sort of attitude was not a rarity over the weekend. The duration of the festival was very much a communal vibe —summer camp for filmmakers and film lovers. Something that comes with living out a dream, regardless of the industry, the question of "HOW?" is often posed. The answer is never the same but almost always seems to involve hardship and doubt along the journey, but it always involves… somehow doing it anyway. Because it had to be done. It had to be made. And that was the prevalent energy in not just the panel, but the festival as a whole.

Post-panel, it was back to the ALTER screening room for the Midnighters Shorts blocks. My creeps, I cannot express how blown away I was. Some of the ultimate award winners from the weekend included Will Lee's Ringworms, Kelsey Bollig's Kickstart My Heart, and Ryan Valdez' We Got A Dog. The level of consistent quality is the sort of stuff that makes a genre fan hopeful for the future. I can tell you, it's in good hands. Exploding heads, garbage disposal horror, frayed relationships, creature features, and an unexpected, heartfelt comeback kid metaphor rooted in battling demons that brought me to tears… and then I found out it was rooted in reality. Niagara Falls. 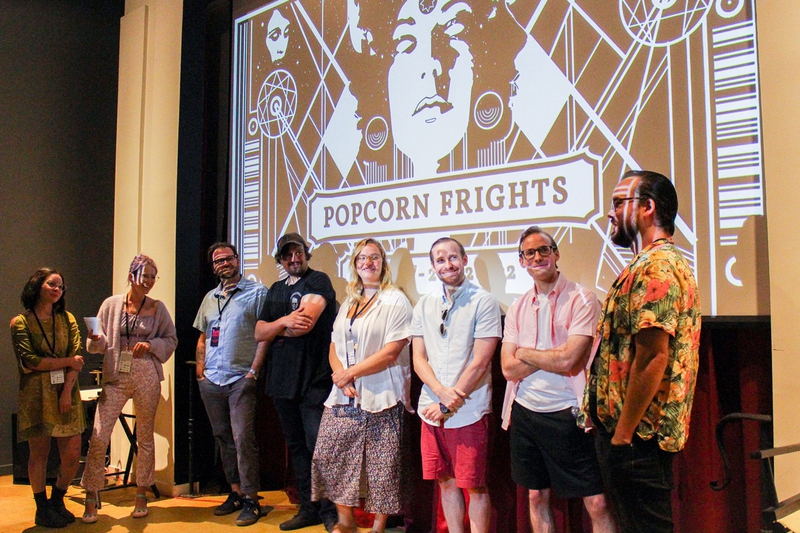 The second shorts block offered up FX, gore, dark comedy, paranoia in Eric Swiz' Book, Chris McInroy's Guts, and ​​Russell Goldman's Return To Sender. The latter was produced by a name you might be familiar with— Jamie Lee Curtis. Suprise after blood-splattered surprise.

Saturday night featured a rooftop mixer with a view of the Miami skyline and a stellar lightning show off in the distance, followed by a late-night screening of The Barn: Part II. The movie in itself is a blast, even if you haven't seen the first installment. It's Halloween ghouls and goo with fun cameos. But when you hear how it all came to be, it adds an extra element of awesome and a sort of punk rock, damn the man, DIY, make-your-damn-movie layer of fun to it. Director Justin M. Seaman was in attendance to share some of the behind-the-scenes stories, and I'll have to tell you all more about this one very soon, because I think you're gonna dig it.

Sunday, we snuck in a little morning beach time with a dip in the Atlantic before heading back to the theater for a faux documentary about a would-be serial killer cult, When The Screaming Starts. Dark comedy mixed with genuine horrors, with Producer and star Jared Rogers on hand for a post-screening Q&A. 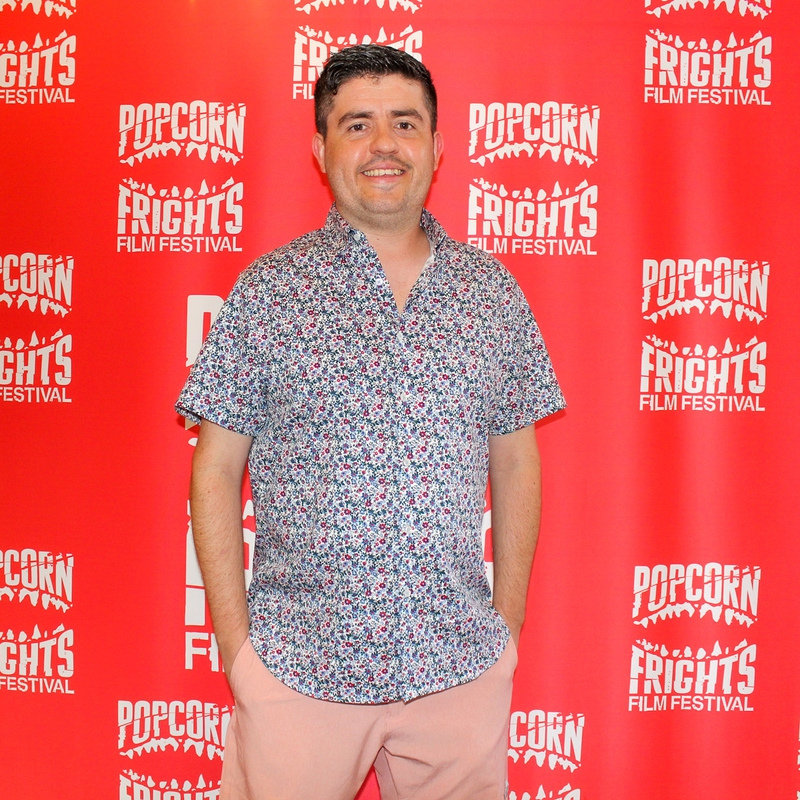 Saturday afternoon also featured Kingcast favorite The Timekeepers of Eternity which is something that has to be seen to be believed — a Stephen King mini-series reimagined, to put it in the most oversimplified terms possible. Capping off the festival's premieres was Shane Brady's Breathing Happy. Let me tell you... this one was one hell of a gut punch. 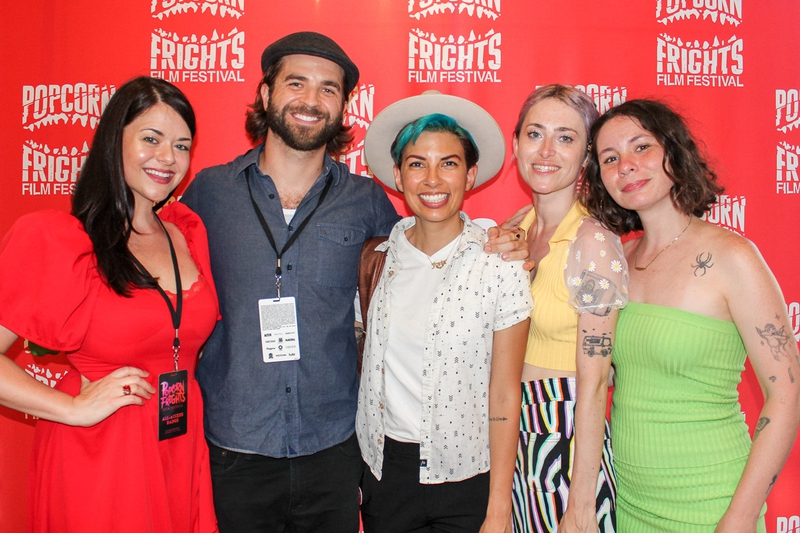 I was not expecting to shed tears at a horror film festival. Let alone shed tears from being so terribly moved, not just once (I'm lookin' at you, Kickstart My Heart!) but TWICE. Brady's Breathing Happy kicked off with a magic show performed by the director and star himself. And I'm not talking about some cutesy hokey shit. I'm talkin' jaws dropping. Shane sold his soul to possess this magic, that is the only explanation. Get on this level. The pre-show preamble wasn't a random chance to show off the skills he bartered his soul for. The movie happens to center on a protagonist who is a magician and uses illusions in metaphorical dream-like sequences. 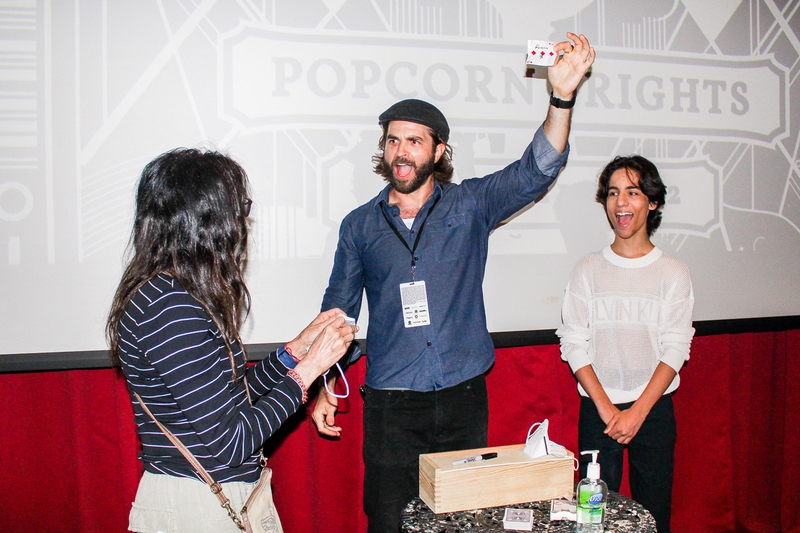 Anyway, it destroyed me, and it was beautiful. The Q&A could hardly go on due to high emotions and tears from moderator Dread Central's Mary Beth McAndrews, cast, and crew alike.

When asked by an audience member how much of this partially autobiographical tale was true, Shane's response was that of a true magician. "Can you guys keep a secret? So can I." The first rule of magic— If you give away the secret, it ruins the magic.

Praise the cinema gods, the festival closed out with a bonkers treat offering ridiculous levity after we were all left covered in snot and tears. Balance, baby. 1987's Miami Connection with live commentary by a trio of local comedians. If you've never seen it— it's a whole lot of catchy '80s pop, the musical numbers only outnumbered by cool ninja shit, and for some reason a heaping amount of bare feet touching faces. No shaming, just noting. 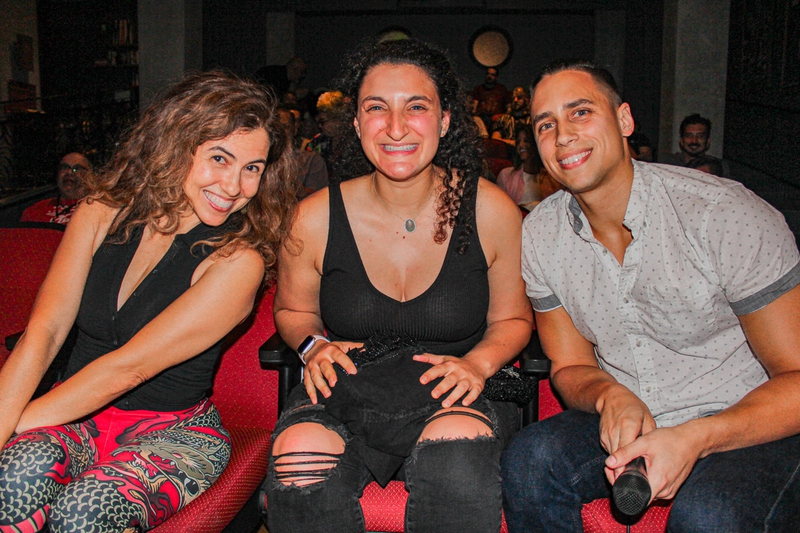 The intimacy of this particular fest allowed me to spend a good amount of time with festival co-founders and co-directors Igor Shteyrenberg and Marc Ferman, who both expressed the same sentiment to me separately— The aim of Popcorn Frights isn't to compete with the big guys but rather to have a space for genre lovers to come together and enjoy "the thing we love most." And that is the overarching vibe that is absolutely evident. This is a celebration, by fans, for fans. 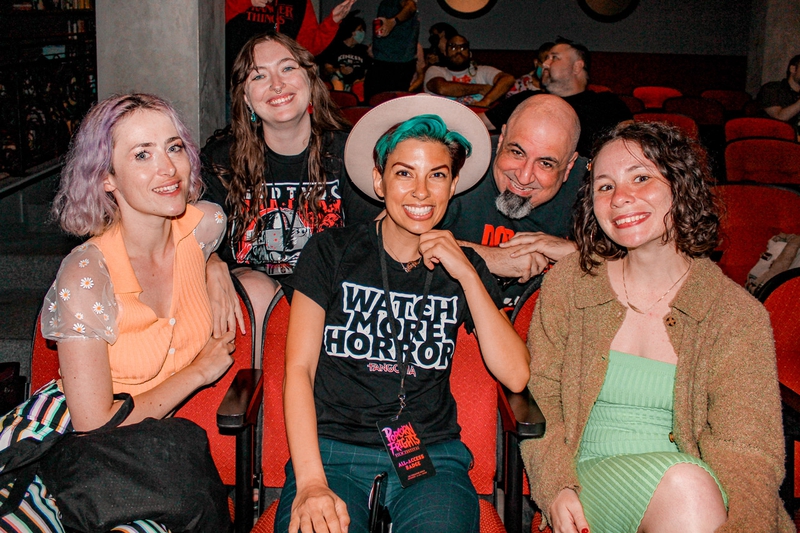 When Popcorn Frights say they put community first, they put their money where their mouth is. The team does not profit from festival ticket sales, instead, they put the money right back into the festival and the community, booking the best venues available and then filtering the rest back into their local community. Last year, a portion of proceeds went to victims of the Surfside condominium collapse. This year, a portion of those proceeds went to LGBTQ+ organization Our Fund Foundation, in response to the infamous "don't say gay initiative" in Florida.

Not to go all Nicole Kidman on you but yeah.. heartbreak feels good in a place like this. Our communion is having the hell scared out of us as we sit in a darkened room together. There is an alchemy in creation. The energy is palpable. Cutting stuff down is easy. Making excuses is easy. Doing the damn thing and sitting down in that room to screen something from your brain for an audience to experience a vision you had, a seed of an idea… that will never not be magic and I will always celebrate that. And I know you weirdos will too. 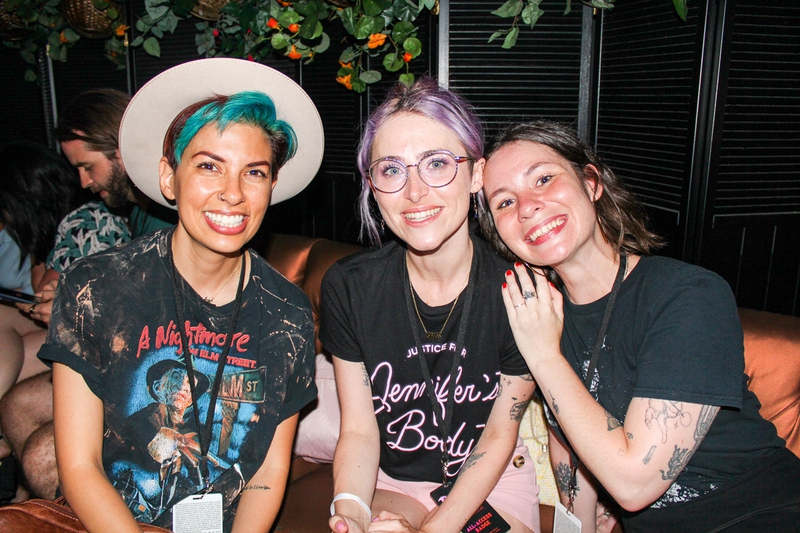 Miami wrapped me up like a warm, damp blanket. I would say should you find yourself near Miami Beach, check out this festival. But instead, I'm going to say, make it a point to get to Miami for this fest. The intimacy and the unique flavor of this city, the Popcorn Fest team, and the local genre community is something that needs to be experienced. And if you don't want to wait a whole year to savor the flavor for yourself, you're in luck. Popcorn Frights Wicked Weekend kicks off September 28th and runs through October 2nd. It's a mini-fest, screening goods like Scare Package II, Spirit Halloween: The Movie, and Terrifier 2 just to name a few. Big thanks to the whole Popcorn Frights team, small but as mighty as it gets. As for me, I'll see you next year, Miami!