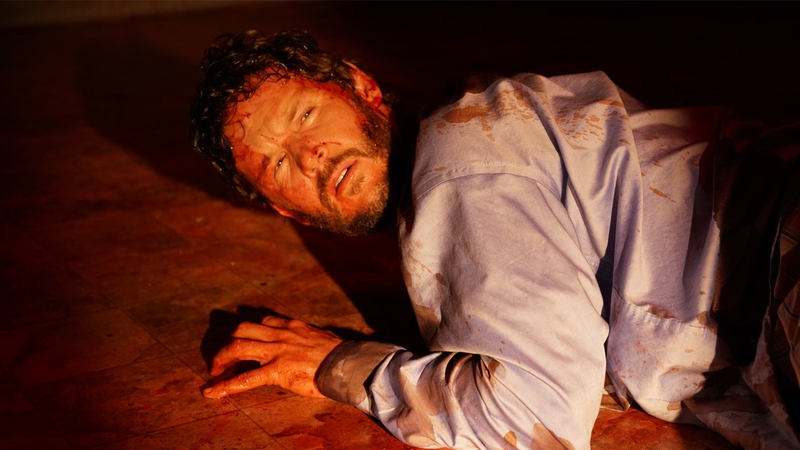 After dropping its first teaser last month, Rebekah McKendry's Glorious received critical raves since its premiere at Montreal's Fantasia Film Festival. Early viewers praise the film's unique blend of splatstick humor and Lovecraftian cosmic terror, with all that jazz on display in the new full trailer for the film. Starring Ryan Kwanten (True Blood) and Oscar-winner J.K. Simmons (Whiplash), the comedy horror flick is ready to give you some morning glory when it begins streaming exclusively on Shudder Thursday, August 18. Check out the full trailer below.

Glorious hails from FANGORIA veteran McKendry, a revered figure in the horror community both for her academic work the Shock Waves and Colors of the Dark podcasts and directing movies like 2019's Christmas-themed slasher All the Creatures Were Stirring or the Lifetime Network camp-fest Psycho Granny. With Glorious she appears to have graduated to a whole new level of audacious genre-bending, and we wouldn't have it any other way. Surely H.P. Lovecraft would have approved the co-opting of his mythology for a glory hole-themed splatter romp? On second thought, who cares what that guy would have mused about it?

McKendry herself recently spoke to Fango correspondent Lindsay Traves about how that Lovecraft angle (along with the fact that it was a super-contained chamber piece that could be shot with few actors in COVID-safe conditions) helped sell the project almost immediately.

"Immediately, I thought there's something really charming here. I found it to be a really compelling concept. It was like My Dinner with Andre but in a bathroom. I immediately took it to my husband [co-writer, David Ian McKendry] and was like, I feel like we can put a lot of philosophy in this. It felt like something that we could put the pandemic in. The confinement, the feelings that we were all feeling. We had reached the, 'what the fuck am I doing with my life?' point of the pandemic where we were like, 'what are we even doing?' So this was a good place that we could put that weird existential crisis that we were going through. Then we just started writing it."

Here is the official synopsis:

"Spiraling out after a bad breakup, Glorious follows Wes (Ryan Kwanten) as he ends up at a remote rest stop miles away from civilization. His situation worsens after he finds himself locked inside the bathroom with a mysterious figure (J.K. Simmons) speaking to him from an adjacent stall. As Wes tries to escape, he finds himself an unwilling player in a situation bigger and more terrible than he could possibly imagine…"

Glorious appears to be only the first in a virtual spree of projects McKendry has on her docket. First up, she co-wrote the script for the latest forthcoming entry in the Bring It On direct-to-video franchise, only this one's got a horror angle. Bring It On: Cheer or Die "follows a cheer squad as they practice their routines overnight in an abandoned school during Halloween weekend where one-by-one, the teens fall victim to a deranged assailant." She co-wrote the script with Dana Schwartz from a story by Alyson Fouse (Scary Movie 2), with Karen Lam (The Curse of Willow Song) directing. It is expected to debut on SyFy this fall, just one of several projects like The Banana Splits Movie or Winnie the Pooh: Blood and Honey attempting to bring new blood to mainstream franchises by adding, well, blood to them.