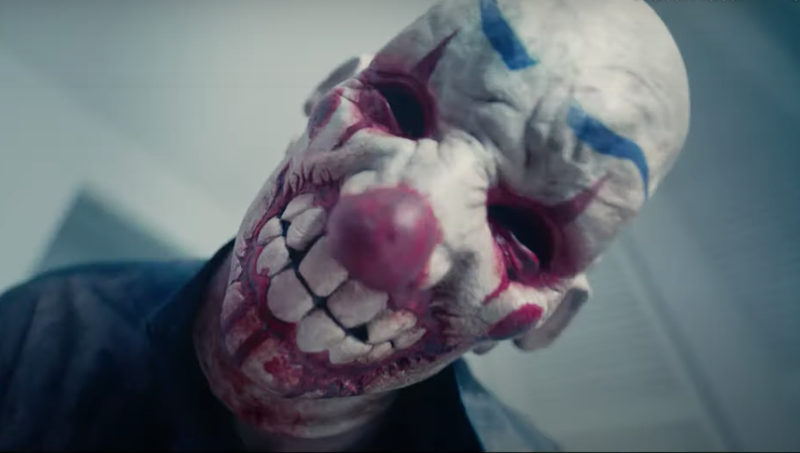 If you've spent any time in Clubhouse over the last few months, you're likely to have run into The Clubhouse of Horror. Back in April, we gave you a first look at the upcoming anthology horror Sinphony, born in the virtual halls of the Clubhouse app. Producer Sebastien Bazile, affectionately known as "French Batman" frequently haunts those halls, and it's there that this concept was born. Bazile describes it is as so:

This was literally born of Clubhouse [the social audio app]. I met ten filmmakers from all over the world at 5 am in a Clubhouse room and promised them that my company Screen Anthology (Michael Galvan, Scott Norvell and myself) would produce their ten-minute short films to be part of a horror anthology. That was four months ago.

Four months ago, a seed of an idea was born amongst ten filmmakers who met virtually within the app. Today, we have a true blue trailer to share with you. A pretty cool testament to the tenacity of these filmmakers. Composer David Fesliyan composed the music for the whole anthology. Host's Haley Bishop will star in her own segment "Forever Young," Blithe Spirit's Stella Stocker and Not Going Out's Donna Louise Bryan, are both featured in Mark Pritchard's "Limited Edition." Sinphony is planned for an October or November 2021 release. Of course, we'll keep you posted on the official premiere date. For now, behold! The trailer:

Here's a complete list of the segments and filmmakers involved with the project.

The anthology explores various aspects of the human condition as each character traverses through tragedies caused by a supernatural entity.

The Keeper - Writer: Greg Greene - Dir. Wes Driver
A small-town innkeeper’s growing concern over domestic abuse between his new guests takes a horrific turn as he stumbles upon their monstrous secret.

Tabitha - Writer/Dir. Jason Wilkinson - (Killing Time)
After a botched robbery, a young woman bleeds out in her car, while being terrorized by a ghostly figure.

Do Us Part - Writer/Dir. Kimberley Elizabeth (Nightmare On Film Street)
A recently separated couple comes to terms with the fact that one of them is a ghost.

Mother Of Love - Writer/Dir. Jason Ragosta (ZTV, Boy In The Dark)
A witch must summon the power of her coven to defend her child from a crazed killer.

Rose Motel - Writer/Dir. Baraka Noel (The Thieves Code)
A struggling comedian stuck in a dingy airport motel room without his phone and wallet becomes increasingly manic when he can’t reach his girlfriend via the landline.

Forever Young - Writer/Dir. Haley Bishop (Host)
In a desperate attempt to preserve her youth, a 30 year old woman engages in a social media dance craze that may have dire consequences.

Maternally Damned - Writer/Dir. Nichole Carlson
The anxiety of a woman's unplanned pregnancy intensifies as her body goes through a series of unexplained changes.