Makeup FX artist Rick Pour walks us through the character covered in callbacks, plus other nods in the new film. 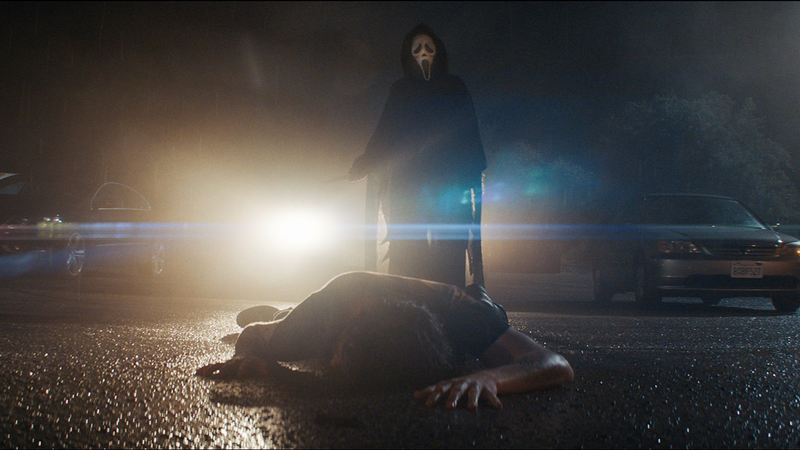 This article contains full spoilers for the new Scream.

Despite the title seeming to suggest a Halloween (2018)-esque rewriting of the canon, Scream (2022) is very much "Scream 5", with all four of the previous films being directly or indirectly referenced as often as possible. Team Radio Silence and screenwriters Guy Busick and James Vanderbilt know how much these movies mean to their fans; you might love some more than others, but I'd be shocked if even the slightest retcon would go over well with the faithful. Like 'em or not, they're part of the history, and they're here to stay.

That sort of commitment to the franchise as a whole instead of cherry-picking the ones everyone agrees on has allowed for the new film to embrace its legacy in ways that are both sweet and humorous. Scream 3, for example, could have easily been more or less ignored, especially as the series' increased reliance on the significance of the "Stab" franchise creates a seeming wormhole of reality (was "Stab 3" ultimately about... the making of "Stab 3"? What do they call the "Stab" movies in the "Stab" series?) But instead, we get at least two direct references to the film; one being a cutesy little joke at Gale's bangs on her morning talk show, the other a rather lovely reveal that Sidney eventually married Patrick Dempsey's character of Mark. Scream 4 also gets some love despite its failure at the box office; its eventual fanbase is a big part of why we even have a new film at all, so of course, it wasn't ignored either. For starters, astute viewers will spot on a YouTube page that Kirby Reed did indeed survive and is being interviewed by our friends at Bloody Disgusting. And Marley Shelton's Judy Hicks returns, who, along with Heather Matarazzo as Martha Meeks (in a brief cameo) can stand proud as the first characters introduced in sequels that got to come back in a subsequent film. Can we get Joel the cameraman in Scream 6?

I believe these signs of respect are why this series resonates with so many viewers, young and old (and why a new entry can open to nearly 40 million dollars during a pandemic). Sid, Dewey, and Gale may be the poster children, but the whole Scream world has naturally aged and evolved along with its audience over the past few decades, without the constant resets that ultimately keep us from having that kind of connection with other franchises. And being that this was the first film without Wes Craven at the helm, it seems like honoring the past was more important than ever, as if to assure certain audience members (myself included, admittedly) that this was a legit continuation that would make Craven proud, not a cheap cash-in capitalizing on the brand. In fact, it's recently been revealed that the "For Wes!" scene, referencing Dylan Minnette's character, also doubles as a toast for the departed filmmaker, with most of the voices not belonging to the young extras, but of Scream veterans from both sides of the camera (Jamie Kennedy, Patrick Lussier, Julie Plec, etc.). And while Stu's rumored return didn't pan out, Matthew Lillard does indeed return, as he provided the voice of Ghostface in the "Stab 8" clip. But it's not all just audio Easter Eggs; once the film comes to Blu-ray we can all enjoy freeze-framing the various bits of set dressing that add to the fun, like the fact that Dewey still has Out of Darkness and The Woodsboro Murders on his shelf.

The love and honor for Wes didn't stop there, though. One of the new characters in the film is Stu's nephew Vince (Kyle Gallner), but to makeup artists Rick Pour, Jason Willis, and Jeff Goodwin from Bearded Skulls MUFX, he became a kind of human Easter egg, as they opted to make nearly all of the character's tattoos function as tributes to Craven's work in some way (plus another for Paramount's own history in the slasher genre). Poor Vince doesn't last very long in the film (is that even a spoiler? My man got it in the trailer), so their work is very easy to miss on screen - but thanks to some photos they supplied, we can now appreciate their tributes up close! 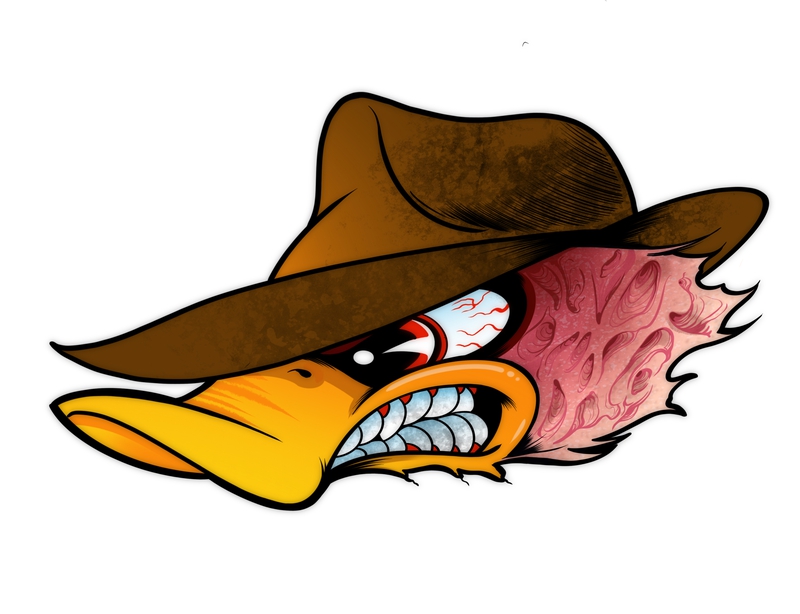 Obviously, there's gonna be some Freddy in there; Craven himself paid tribute to the character in the series with "Fred the janitor" all the way back in the original, and while he may not exactly put it at the top of his resume, Gallner appeared in the 2010 Elm Street remake (making his quick/painful death here another way of honoring Wes, perhaps? Kidding!). I love how it skirts around any potential licensing issues while, at the same time, feels like something that could very well appear in the films, as Freddy shape-shifted more than once over the original six-film timeline. Hell, there was even a bird attack in Freddy's Revenge! 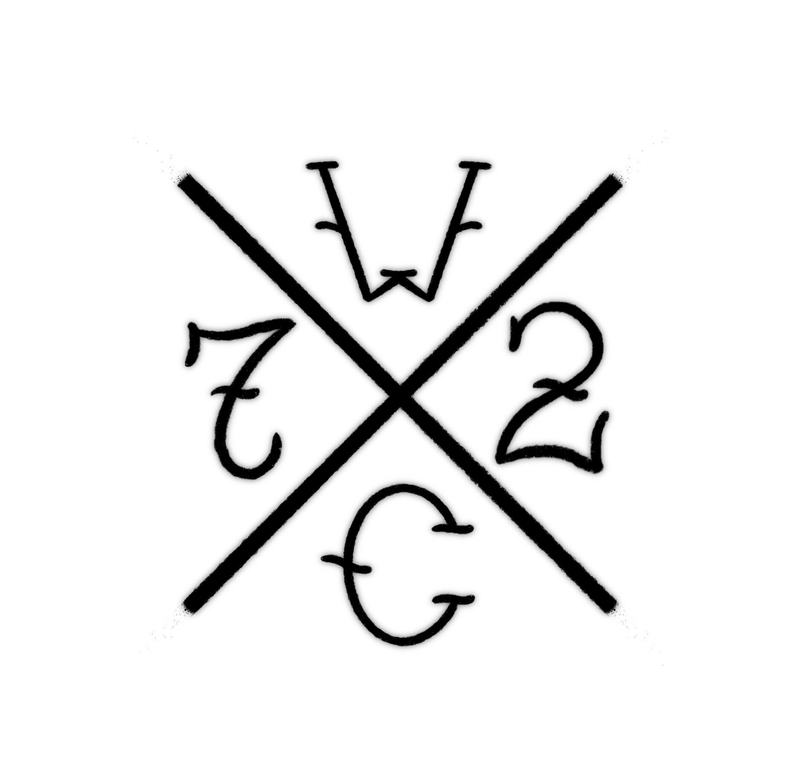 This one's more of a "deep cut"; "WS" is obvious, but the significance of the "72" might seem a little more obscure: it's the year his first film Last House on the Left was released. Which means it's now 50 years old, somehow. Gonna need a minute to process that. 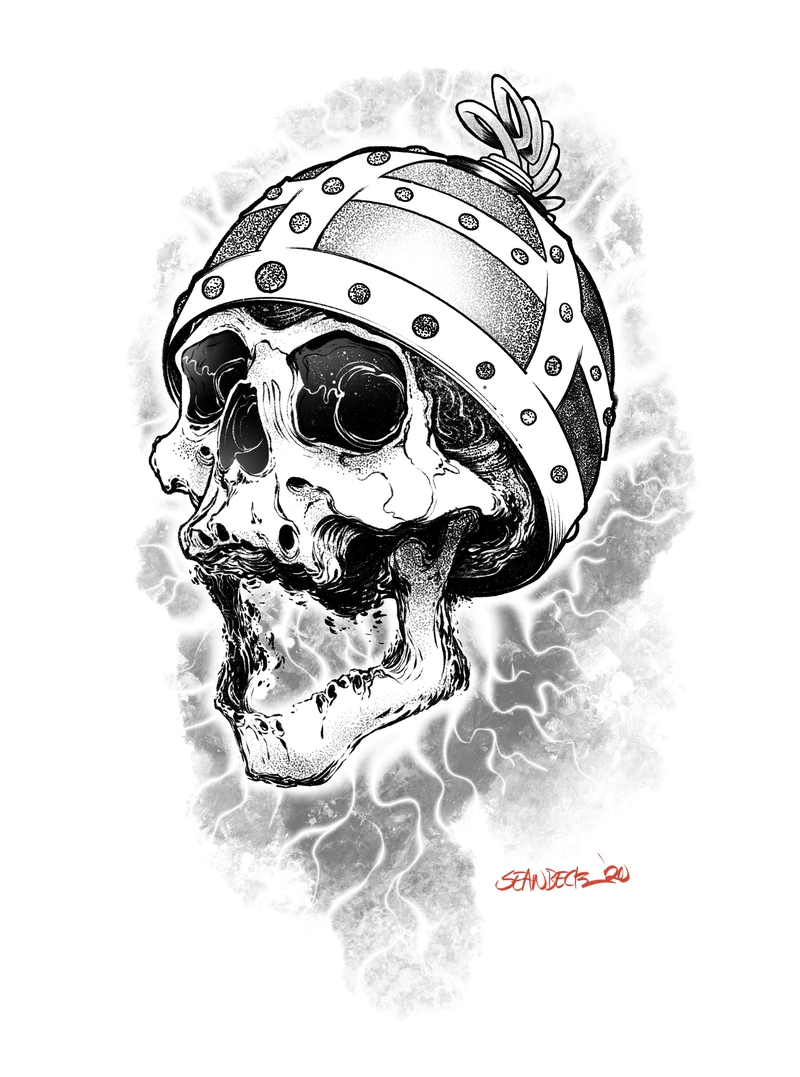 Personal fave! My deep abiding love for Shocker is world-renowned (among those who know me anyway), and I am always thrilled on the rare occasions I see anything else giving it its due. Pour says he loved it back in the day and thus - of all the options at their disposal from Craven's career that weren't immortalized in temporary ink - "made sure we threw something in there." And for that, I thank him.

Here are a few more close up shots of Vince's Craven-centric body art: 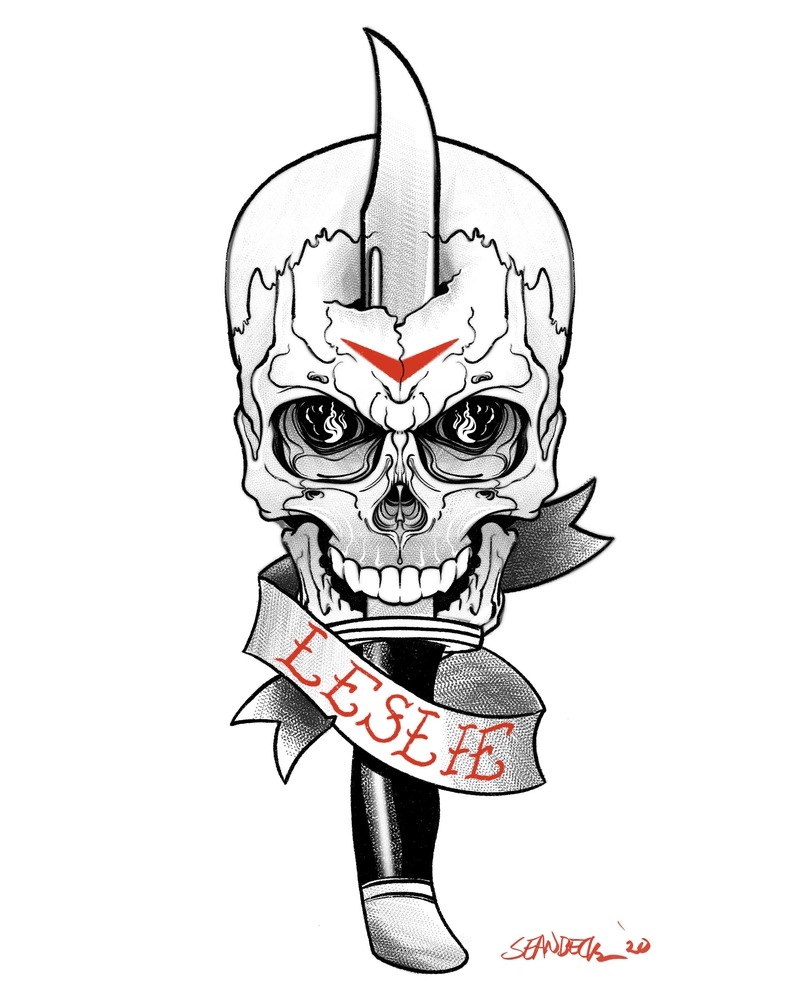 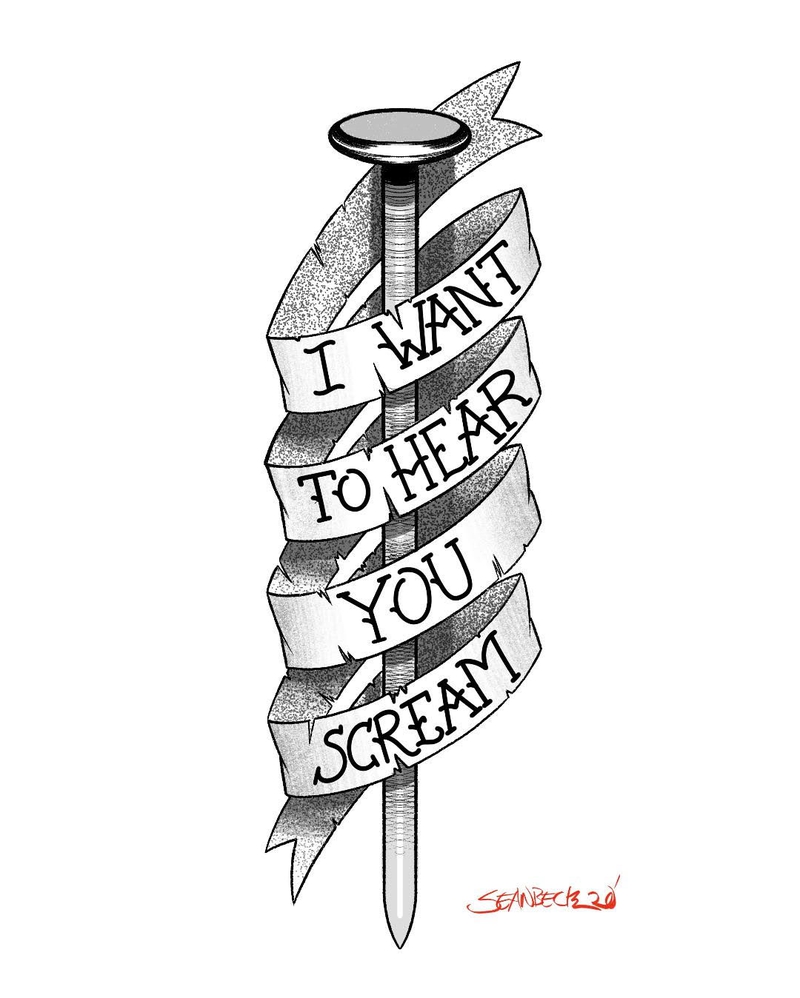 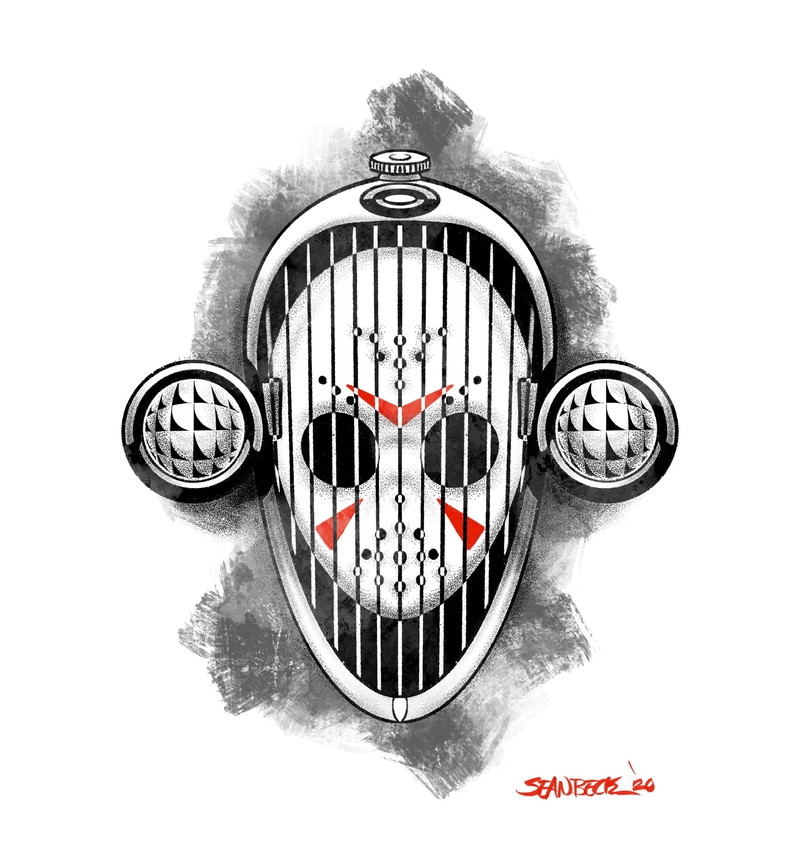 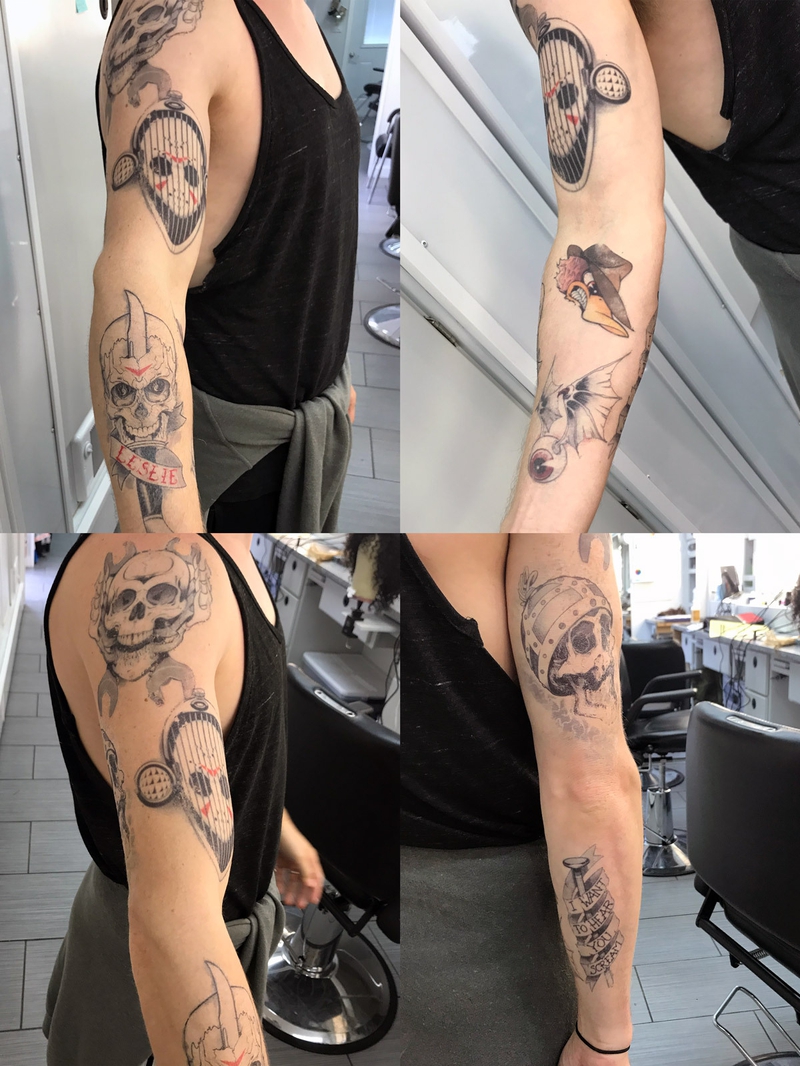 Naturally, Pour and his team had more to do than fake tattoos, as they also handled some of the film's demises. One of the most memorable deaths in the film is that of Amber (Mikey Madison), as she is one of the villains and thus needed to be disposed of with appropriate spectacle. 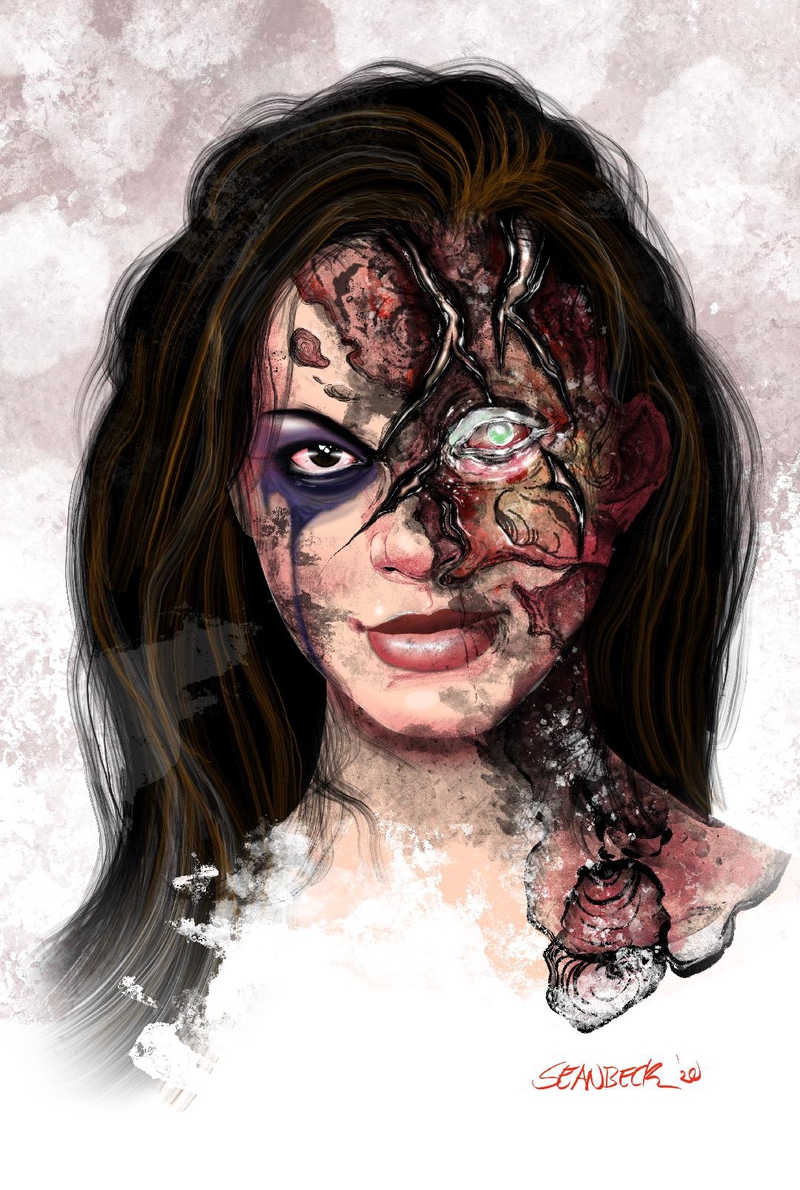 They did not disappoint, immolating her on the stove before Tara finishes her off. Getting shot is a bit of a tradition for the unmasked killers, but the burning is unique to this series - just not to the cinematic legacy of Wes Craven, of course. Pour tells us, "we didn't want to beat people over the head with it, [but] we couldn't resist a bit of a Freddy reference here," with the burned half of Amber's face certainly having some resemblance to the late Fred Krueger. 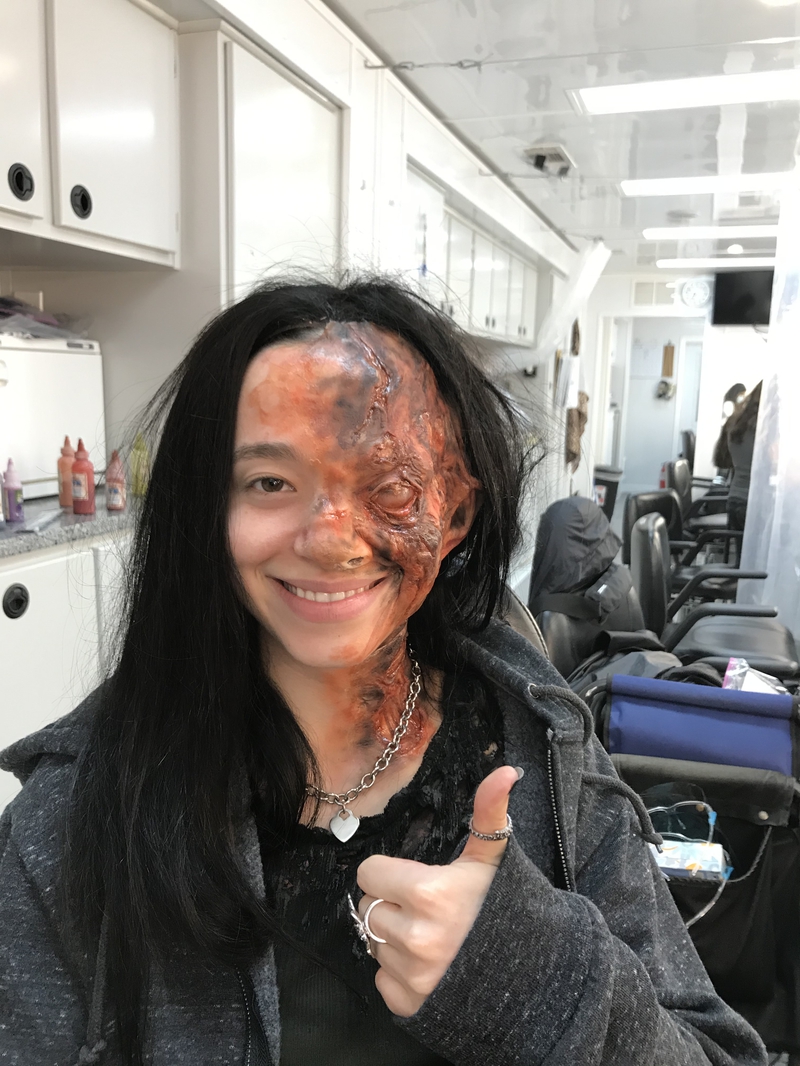 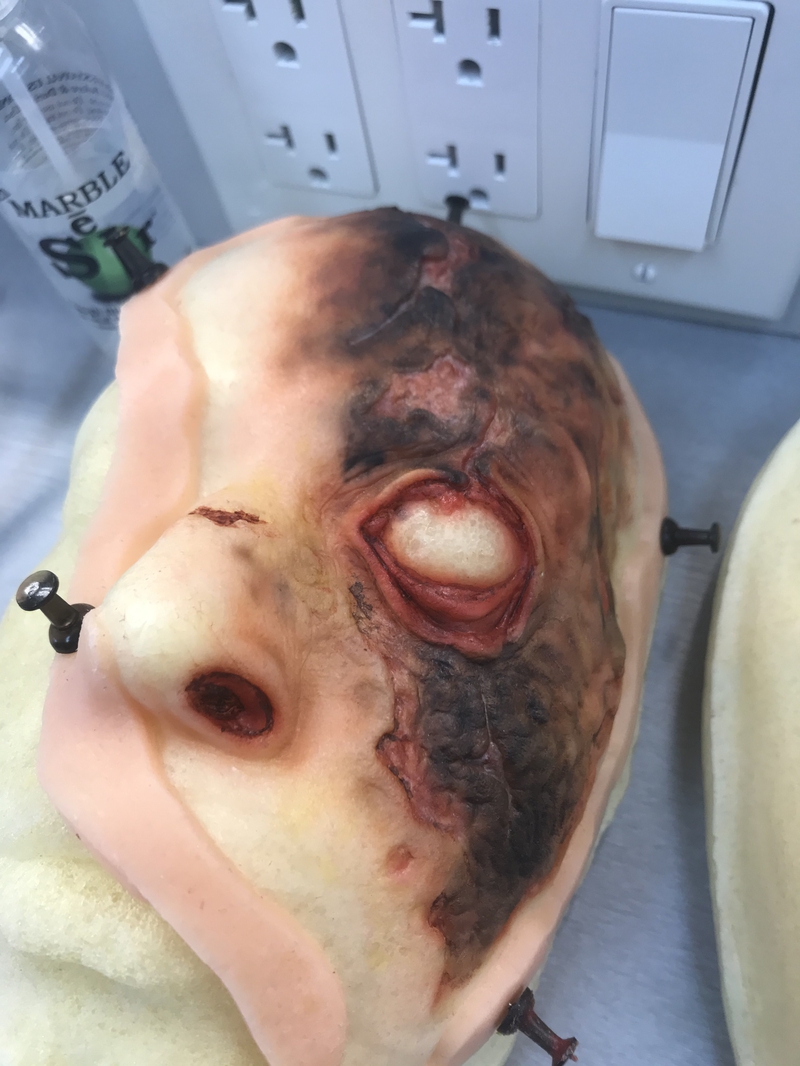 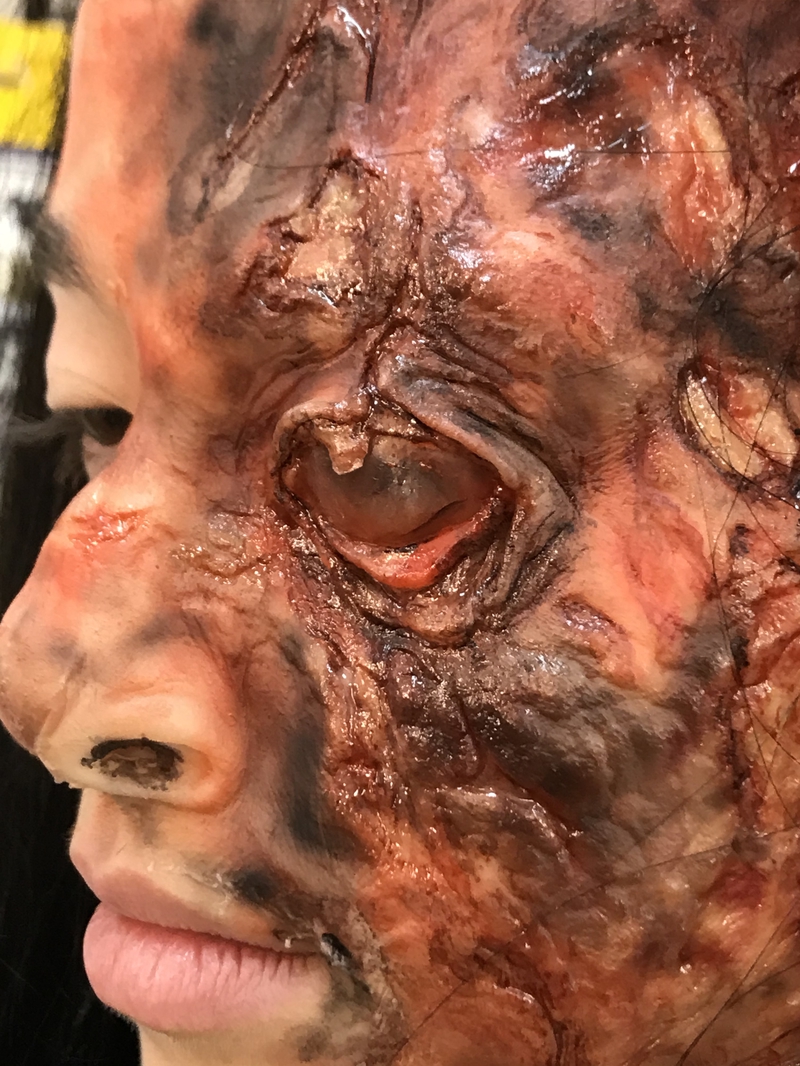 They even went so far as to make her ear out to be a dead ringer for his, for all of you loberotics out there. 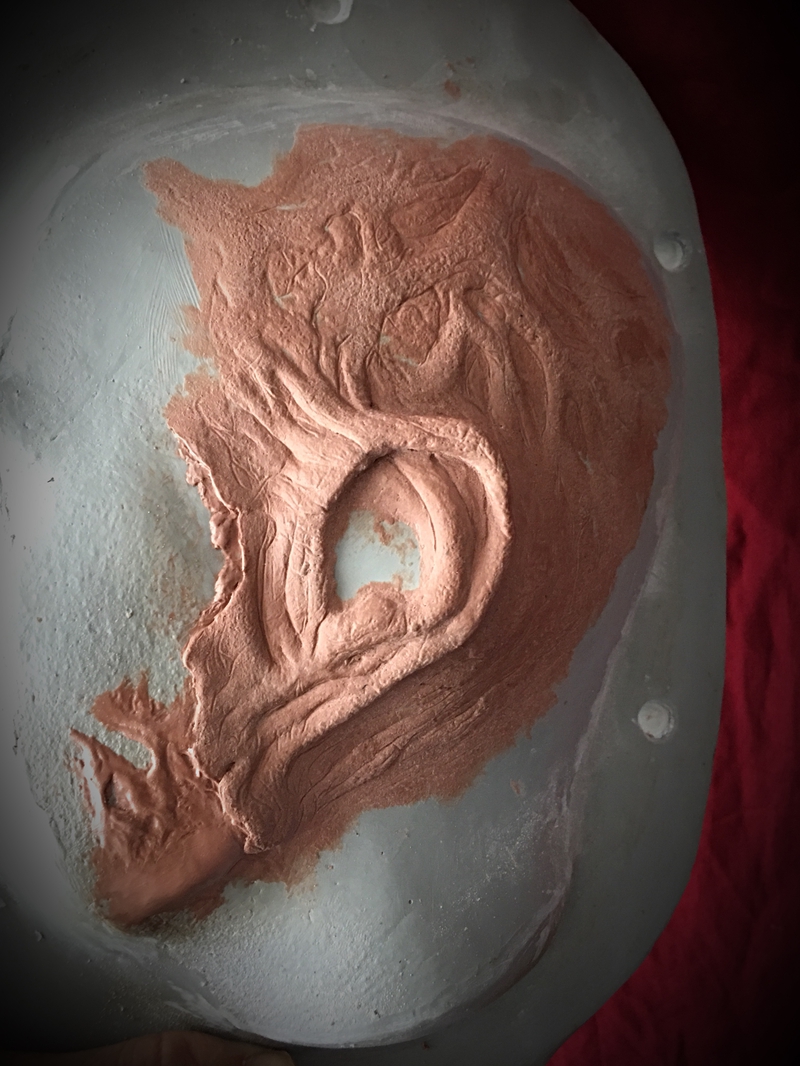 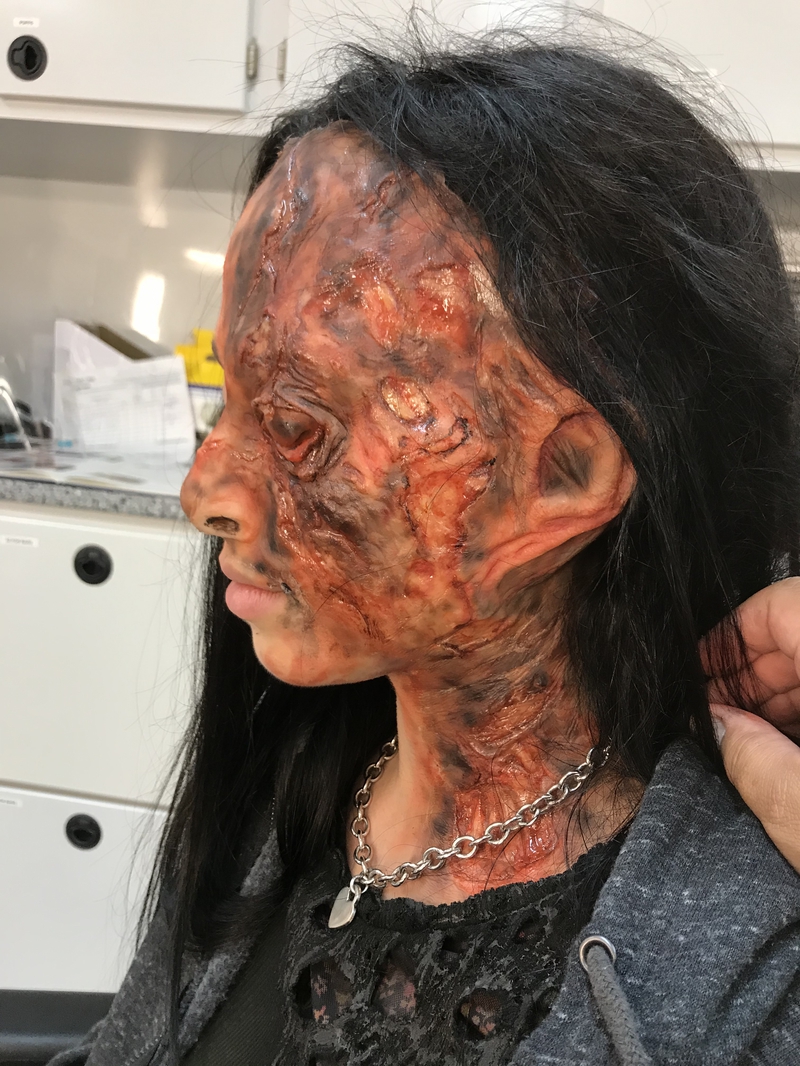 It'd be weird to kill the character named Wes with a specific reference to, well, WES, so for Dylan Minnette's sad exit, they looked to… Rambo III? Pour - who says it is, in fact, his favorite kill in the movie - explains:

"One of my business partners is Jeff Goodwin. He's been in the biz since the early '80s. He did Blue Velvet and made the severed ear for it. He also happened to work on Rambo III; he did the gag on Stallone where he has a shard of wood in his side and Rambo pulls it out, pours gunpowder in it and cauterizes the wound. Even though there are cuts in the finished film, it was actually done in one continuous take.

Being that Ghostface basically kills people by stabbing them, we were trying to come up with a new and interesting variation. Early in prep, Jeff pitched the idea of using the same method he used on Stallone to make Wes' neck stab more brutal and visceral. The directors loved the idea. So Tony Rosen set about making a smaller version of the prosthetic and the mechanics to fit on Dylan Minnette's neck. Some people may think the kill is CGI, but it's practical with just a bit of VFX clean-up. The whole cast came out that day and stood at video village. They burst into cheers when we did it. Worked great and is one of my favorite things we've ever done. Unfortunately, I don't have any pics as we were all-hands-on-deck to pull it off."

Well, it was hard enough watching poor little Wes die the first time, so I can't be too sad that there aren't up close and personal images of the poor sod getting it, but on behalf of myself and everyone else at FANGORIA I want to extend a huge THANK YOU to Bearded Skulls MUFX for not only supplying us with these terrific behind-the-scenes shots of their wizardry (along with some bonus shots below), but also for bringing some Fango-worthy slasher kills to the franchise.

Ghostface has rarely displayed the same creativity as Jason or Michael Myers with his kills, making memorable prosthetic/makeup gags something of a rarity in the previous four films (and then the MPAA would mangle them anyway; thankfully they've seemingly softened over the years!), so these and other moments helped set the film apart from Craven's while also staying true to the world and legacy he began in 1996. It's a tricky balancing act, but Radio Silence and the screenwriters managed to find it, thanks in no small part to what Pour and his team brought to the table. 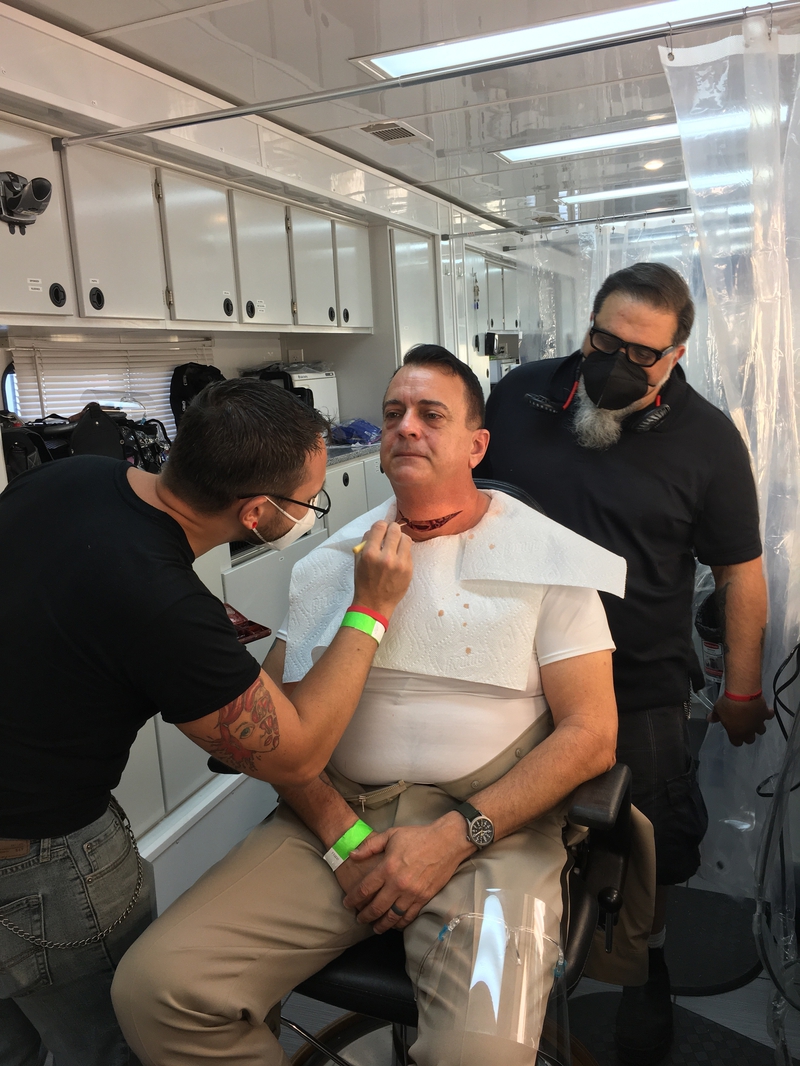 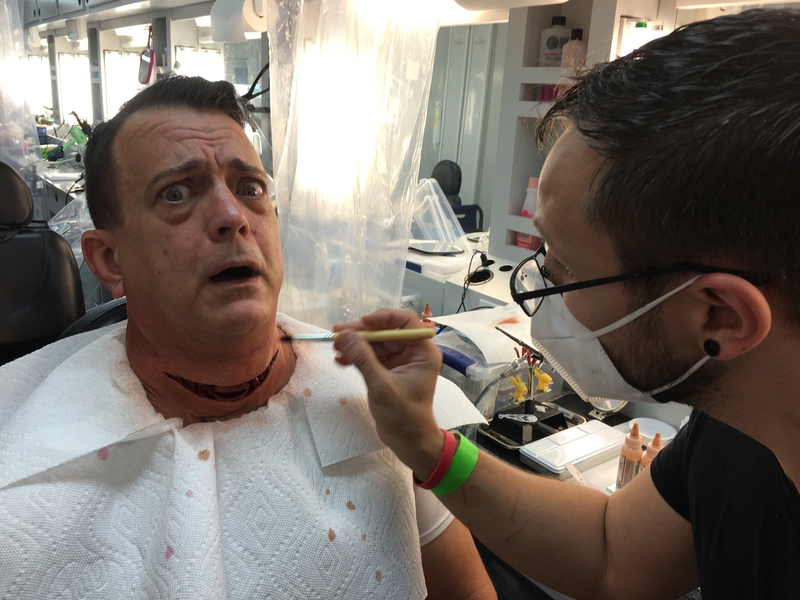 Rob Fortunato, not quite at the acceptance stage of grief. 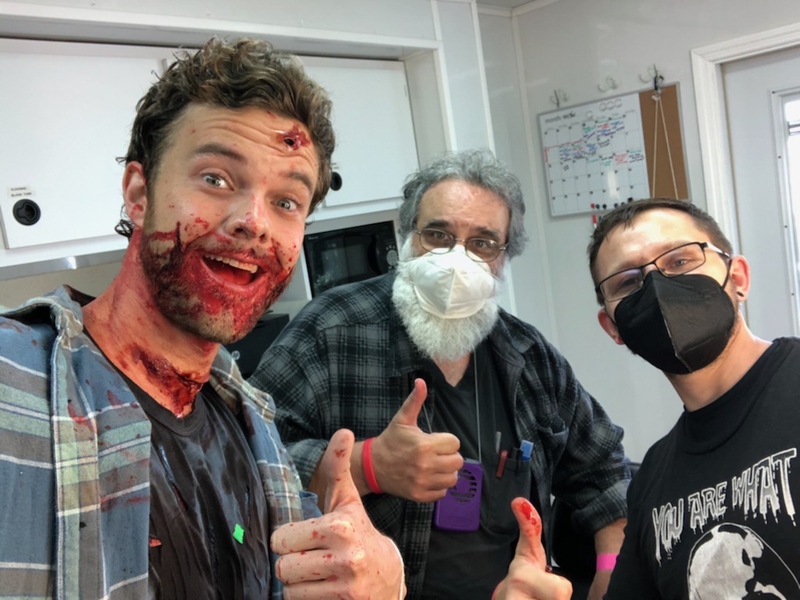 The reviews are in! Jack Quaid, Jeff Goodwin, and Tony Rosen give Bearded Skull's work on Scream three thumbs up.