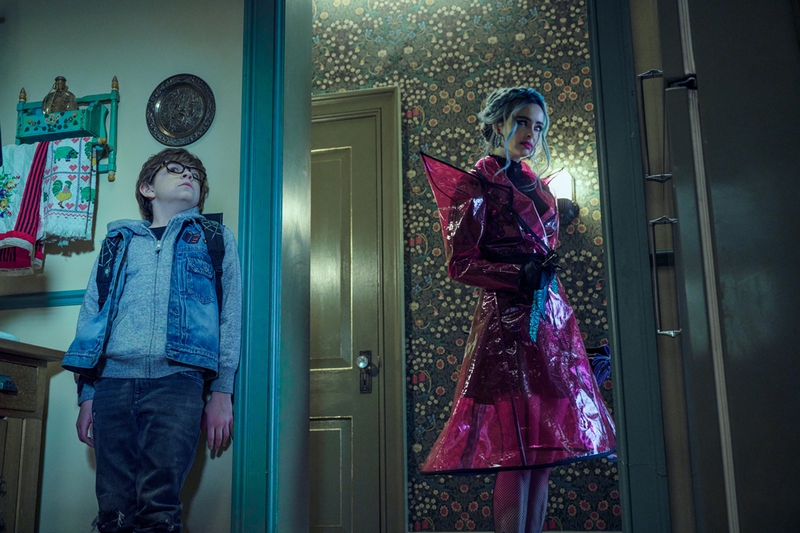 Nightbooks, now streaming on Netflix, may be pitched at young audiences and have a couple of kids as its leads, but director David Yarovesky saw no need to soften the scares. That makes sense, as his previous film Brightburn took a Superman-esque story into hard-R territory; Nightbooks isn’t as explicit, but it’ll definitely give junior viewers some good shivers, and maybe a nightmare or two.

Scripted by Mikki Daughtry and Tobias Iaconis from the book by J.A. White, the film stars Winslow Fegley (Come Play) as Alex, a boy who has devoted his life to horror, including filling the titular notebooks with original scary stories. An initially unexplained event has caused him to turn his back on his passion as the film begins, and as he goes to dispose of those volumes, he is lured into an apartment occupied by the witch Natacha (Krysten Ritter). Trapped inside this dimension-hopping, stunningly designed dwelling, Alex must tell Natacha a new frightening tale every day to stay alive—rediscovering his love of fearful fiction along the way—while he and fellow captive Yasmin (Lidya Jewett) attempt to figure out how to escape. Here, Yarovesky (who also discusses Nightbooks here) explains his personal connection to this story and how he realized his personal vision for it. 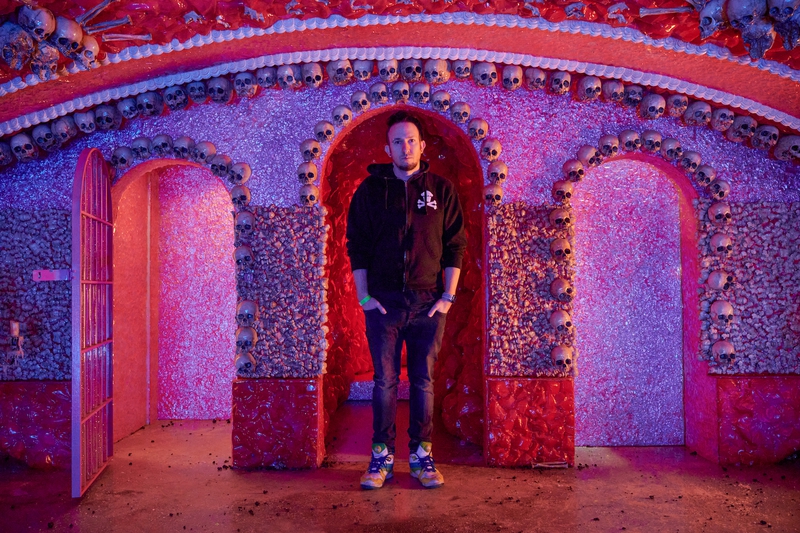 FANGORIA: Were you familiar with White’s book before you took on the film version?

DAVID YAROVESKY: I totally wasn’t. After I read the script, I immediately read the book, because the world of the movie is so rich and required so many tiny decisions, and I really wanted to know the story. This was before I was hired. And as I dug into the book, I fell in love with it. I was quite impressed with the story, and touched by it, and when I was making the movie, I obviously used the script because the writers did an incredible job, but I kept that book with me often. I certainly leaned on it for some of the creative decisions in the design and the logic of how things worked; when I had questions, I turned to the book for answers.

FANGORIA: The production design by Anastasia Masaro is truly impressive, particularly the library. Can you tell us about that?

YAROVESKY: Anastasia did an incredible job. We wanted to create a new kind of dark-fantasy world, and in doing so, we had to create rules that this world respected. We had to understand the history of its creation and how it came to be, and what function each of these places served. Some of it was certainly in the book, some of it was already in the script, but we dug even deeper into that. And also, at the same time, we tried to find ways to be visually distinct from other dark fantasies. I love Tim Burton movies, but I didn’t want it to look like Tim Burton. I love Guillermo del Toro, but I didn’t want it to look like his films. I wanted this to be a fresh, new world for people to experience.

FANGORIA: How much of those environments were practical sets, and how much was created digitally?

YAROVESKY: I’m not a huge fan of digital, so I pushed to have a lot of the environments built practically. Obviously, we would never build a 12-story tower, but we would just lean on digital for those things and not use it as the solution to everything. In the library, the first two floors were entirely a set we could shoot on, and higher than that, it’s a digital extension. But we also redressed the second floor of our set to be the top floor, so we had the three key floors of the library actually there, and then the stuff in between is digital. The Night Nursery set was also all built; there were no digital set extensions there except for the ceiling sometimes, because the set ceiling was a grid of black lights to make the whole place glow.

What’s funny about the library is, I was standing on that set with a sense of awe, and I said to Anastasia, “Wow! What was the most expensive part of this whole thing?” and she said, “The books!” I was kind of blown away by that, because we were standing there amidst these towering windows and sculptures, these gargoyles we designed and created, and the floor that looked so crazy, and it was the books; we were using so many of them. And it was not just any books, because we had an incredibly restricted color palette, so there were only certain colors and shades we’d allow on our shelves—just to add another layer of complexity. But the end result of all that work was quite impressive. I don’t know the number of books, but it was a big one! 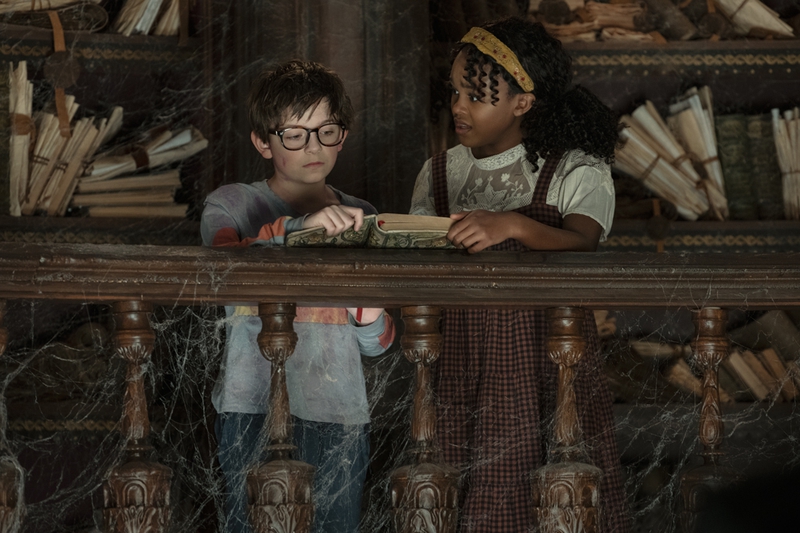 FANGORIA: Given that Nightbooks is aimed at young audiences, were there any restrictions placed on how horrific or gruesome you could make it?

YAROVESKY: Well, there was the obvious sense of wanting families to enjoy it together, so I wasn’t going to cut anyone’s head off or be incredibly violent. Our mission statement early on was to do family horror or gateway horror or whatever you want to call this, and do it differently than anyone else was, and to make a movie that really pushed the envelope. Early on, we talked about how intense and scary and threatening Jurassic Park was, and the Ringwraiths in Lord of the Rings, and some stuff in Harry Potter. And if you go back further, Large Marge in Pee-wee’s Big Adventure scared the bejeezus out of me. All of that exists within a capsule of family entertainment; a family can sit down and watch Jurassic Park and enjoy it together, and be scared together and worried about people’s safety, but knowing that Spielberg’s not going to have a dinosaur eat the kids.

That’s what we wanted to create, but also keep it intense and threatening and actually a horror movie, you know? Within those boundaries of making sure that it’s safe like that, I didn’t pull any punches. We treated it like a horror movie; it looks like a horror movie, it sounds like a horror movie. When we were in the DI, the colorist was like, “Wow, I’ve never colored a family film like this before!” Because he was coloring it like a horror movie. I said, “Yeah, of course, but parents won’t be upset with how saturated the movie is or how much contrast there is; that’s not going to make us suddenly have an R rating or anything.” As a result, Nightbooks feels different from everything else.

FANGORIA: As you’re a horror creative yourself, how did this story speak to you?

YAROVESKY: When I started reading it, I couldn’t believe what I was reading, because it felt like it was written for me. There have been scripts in the past that I’ve gone after because I thought it was a great script or I could do a good job with it, but with this one, I was like, I have to make this movie. I felt so personally connected to the experience. I mean, I was bullied for looking different, for telling scary stories, for loving horror movies, for going to school wearing a Freddy Krueger T-shirt instead of whatever people were wearing back then. And most importantly, I knew what it meant to be incredibly passionate about stories from a young age, to be made fun of for it, to question why I was weird and not like other kids, and then to come out the other side and live the life I have making movies, with my friends and my heroes and my idols. To hopefully see the positive effect my movie can have on people, to make them feel connected or entertained or find their own sense of identity and be inspired by it—what a crazy, amazing thing.

I look back and think, if the people who were cruel to me in school won, and managed to stomp away my love for horror or shame it out of me or make me feel some sort of guilt that made me go in a different direction because I wanted to be “normal,” then I wouldn’t have had this life. So I felt like not only could I tell a great story with this movie, I could also send a message to kids like me, from someone who’s been through it, saying, “Stick to your passion. Your passion for these things is a sort of magic; don’t let the world stomp it out of you."

FANGORIA: It was fun to catch a glimpse of FANGORIA in Alex’s room.

YAROVESKY: Yeah, I wanted to put a piece of myself in there. There are so many little bits of myself in this movie, and I wanted Alex’s bedroom to resemble my bedroom growing up. I sent the production designer photos of me in my room as a kid, and said, “This is what it really looked like! This is as real as it gets.” FANGORIA magazines were in there, there was certainly a Dead Alive poster, a People Under the Stairs poster, a Nightmare on Elm Street poster, a Candyman poster; they were all there.

FANGORIA: There’s one small detail I want to ask about. You’ve been talking about homaging childhood favorites, and the number on the door of the witch’s apartment is “4E.” Is that a Forrest J Ackerman reference?

YAROVESKY: It’s funny; you’re not the first person to ask that, and it’s a question I’ve avoided answering, because I can’t speak for the writer, and the apartment was 4E in the book. I did not add that embellishment, so I don’t want to take ownership of it or speak to it, but you’re not the only person to wonder if that is a nod in Forry’s direction.

Check out our Convo X Fango with David Yarovesky, Nightbooks is now streaming exclusively on Netflix, click below to watch now: