Elvira! Constantine! And Purgatory, Oh My! A Brief History Of DC's House of Mystery

From its first appearance in 1951 to The House Of Mystery's latest incarnation in the new animated CONSTANTINE short. 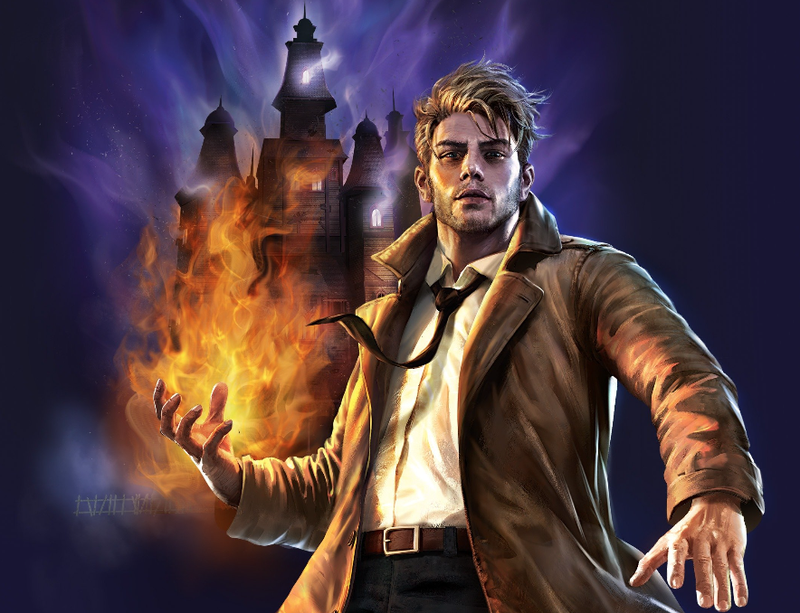 CONSTANTINE THE HOUSE OF MYSTERY (2022)

It's no secret that DC comics and the horror genre tend to get their wires crossed every so often. Whether it be The Batman straight up entwining horror DNA into the film, the company successfully launching a line of horror comics, or recruiting Troma royalty James Gunn to give a buck wild take on The Suicide Squad and one of the company's oldest villains. All while independent horror director David F. Sandberg gives life to one of the earliest superheroes of all time with Shazam! The horror roots run deep within the company responsible for some of the world's finest characters and comic books.

Many people don't seem to recall that DC was also responsible for multiple series of spooky comics, all with a connecting thread: The House of Mystery. An old antiquated estate known for shifting rooms all in the name of tricking inhabitants and visitors/intruders. The house also serves as home to one of DC's most iconic characters, John Constantine, and also as one time home to one of horror's most beloved hosts: Elvira, Mistress of the Dark. You might be wondering how that's possible or whether they're connected in the slightest, so let's run through the history of this house of horrors and why it remains relevant to this day. 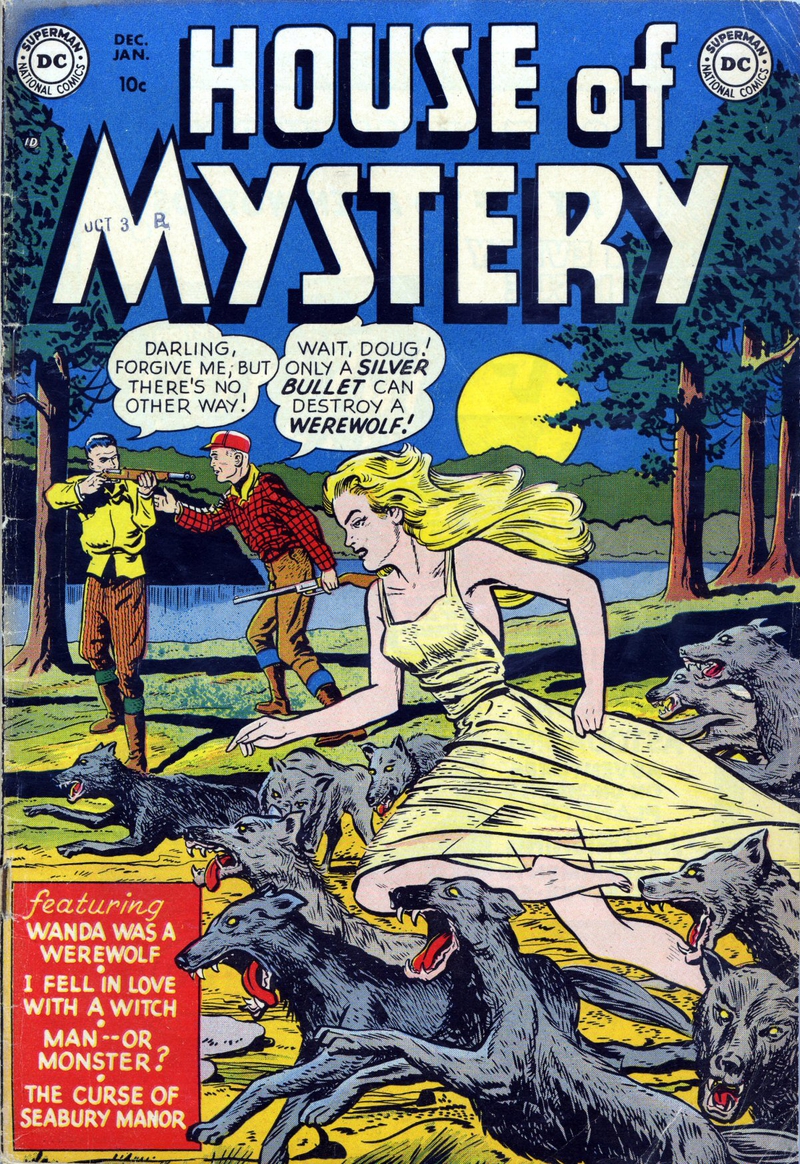 DC Comics began publishing House of Mystery in December 1951. What initially began as a competitor to EC Comics' infamous horror series Tales from the Crypt, Haunt of Fear, and Vault of Horror, the book featured tales of the macabre. It was no stranger to featuring stories about werewolves, witches, ghosts, and even death. The book seemed to be a moderate success, and all seemed peachy. Unfortunately, 1954 saw the rise of the Comics Code Authority and comic book censorship. Horror books were hit especially hard, and were either neutered, canceled, or had to pivot to a new topic entirely. House of Mystery temporality shifted to a focus on science fiction and was even the flagship title for Martian Manhunter after he made his debut in Detective Comics. Also, the House of Mystery was condemned for the time being… or was it? 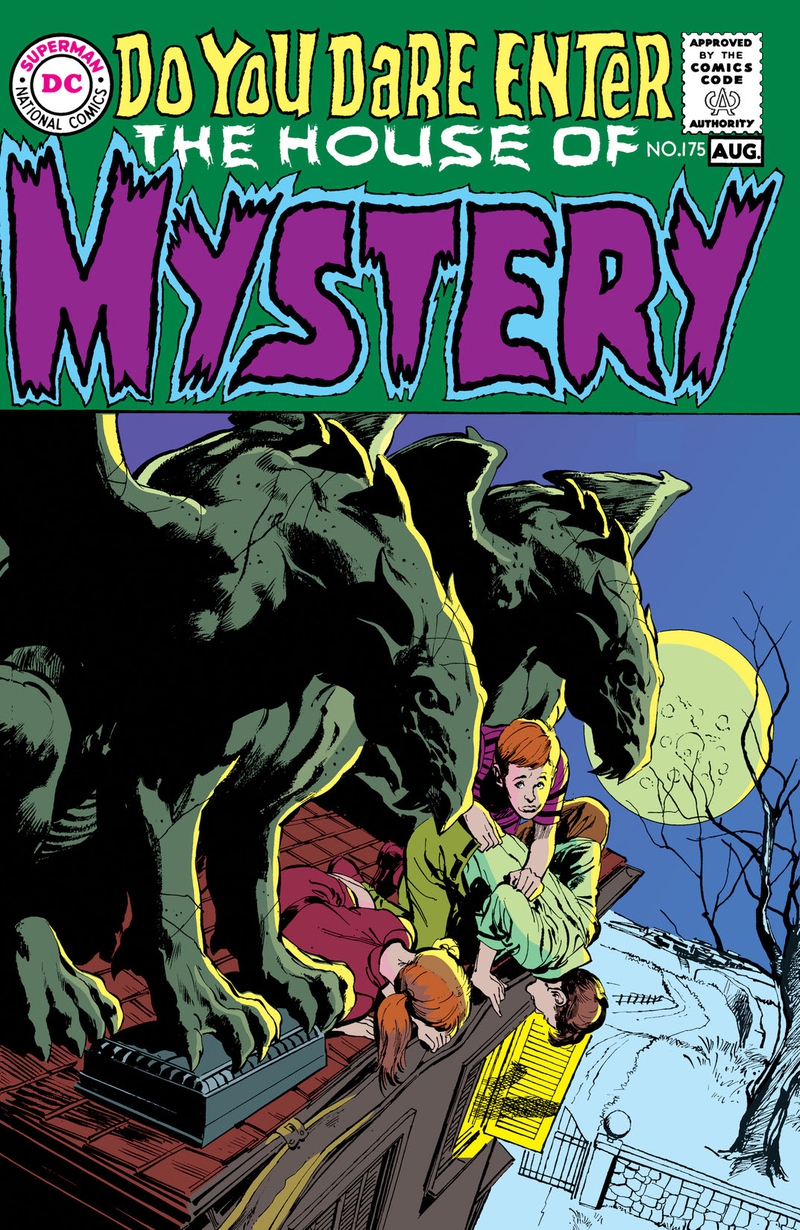 In 1968 comic book companies began questioning the Comics Code Authority under the belief they were being overly censored. DC Comics decided to hire former EC Comics editor Joe Orlando, who was no stranger to being censored by the CCA, to take over as editor on their House of Mystery title and breathe some new life into the series. Thus began the horror focus with issue #175, which was a reprint of earlier stories and tales. The issue would also introduce Cain as the estate's caretaker (DC's take on the Crypt Keeper), and the house began to become a character in itself. With its shifting rooms meant to trick inhabitants, the house seemed to exist on the edges of the DC universe. Not quite real but surreal in nature. The house felt pulled from purgatory, cemetery and all (more on that last bit a lil' later). Cain would later go on to appear in the Sandman series by Neil Gaiman 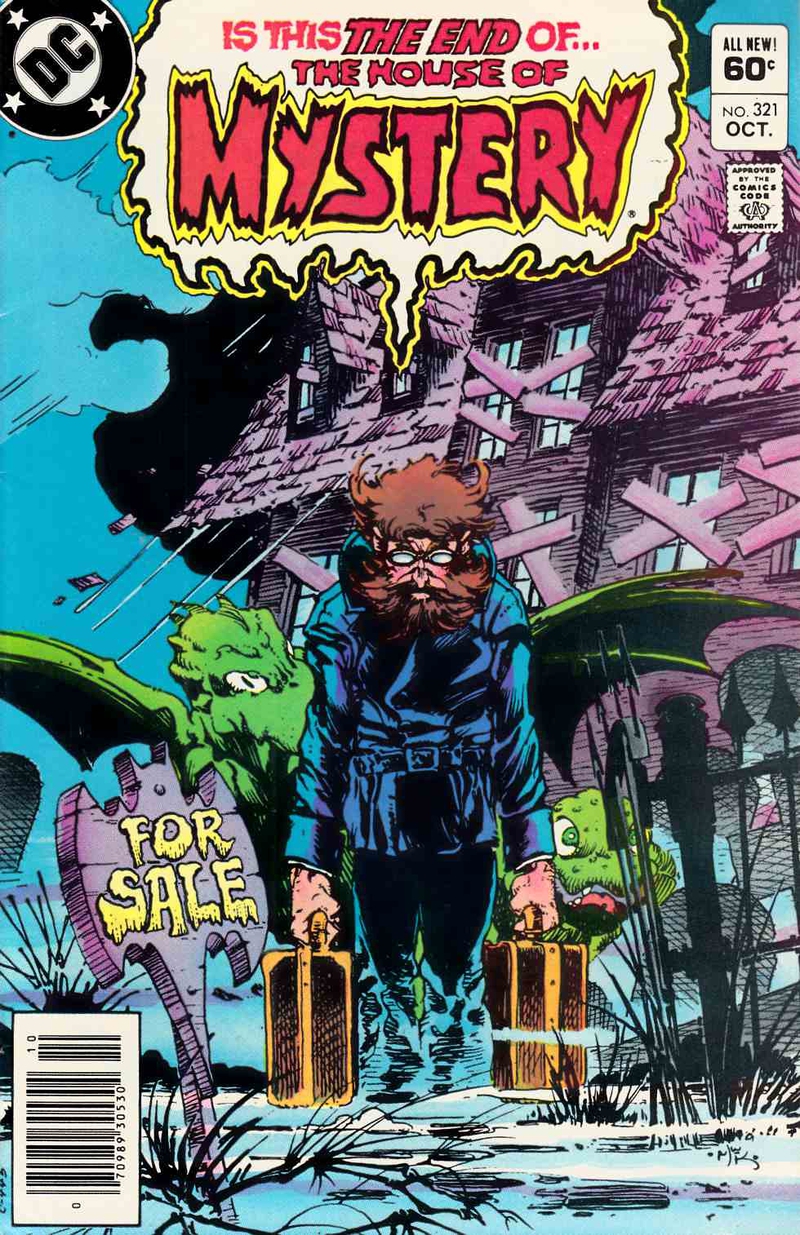 The original series ended with issue #321, likely due to sales. The House of Mystery needed a shot in the arm if it was going to be revived. And that's exactly what happened. Who better to host a horror series than none other than one of the most iconic horror hosts of all time? Yes, I'm talking about Elvira, Mistress of the Dark. In 1986, the series was revived under the title Elvira's House of Mystery. The series saw the icon bring her signature humor and flair to the fledgling title. In it, Elvira takes up the infamous house as her latest estate on the condition that she finds the original inhabitant, Cain. This story proved that the House of Mystery we saw in those older titles from the 1950s and '60s is indeed the same house, quirks and all.

Though the series had only 11 issues, it's a fun, memorable ride and faithfully adapts Elvira's charms. This series is notable for running alongside the infamous Crisis on Infinite Earths, a DC megaevent that saw the company hitting the reset button on the known canon in an effort to streamline the DC multiverse for new readers. Unfortunately, Elvira's House of Mystery was one of the titles to be canceled post-Crisis. The series lives on digitally on the DC Universe Infinite app where readers can still enjoy it, (seriously, go do that. I promise it's worth it). 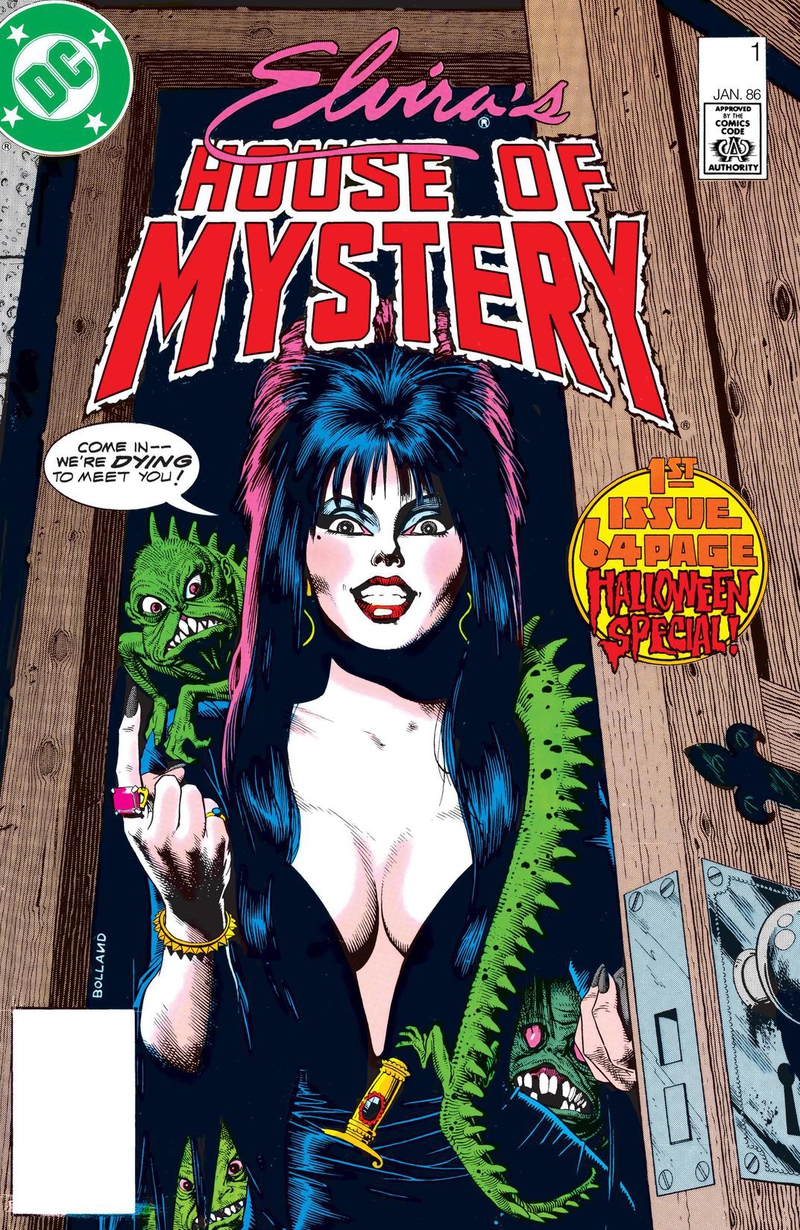 The House of Mystery sat dormant for a while until 2008, when the series was rebooted under DC's "mature readers" imprint, Vertigo. House of Mystery by Lilah Sturges and Bill Willingham saw the famous horror series rebooted as a dark and gritty take on the source material, borrowing elements from the original series such as Cain, and the supernatural abilities of the estate. In the book, the house acts as a purgatory of sorts, with each person who comes into contact recounting a macabre tale of how they got there, in a setup not unlike the 1973 film The Vault of Horror (based on the EC comic of the same name). The Vertigo imprint allowed the writers more freedom with blood, gore, and more horrifying stories because they didn't have to adhere to the CCA, but at the same time, this House of Mystery existed outside of the main DC continuity. 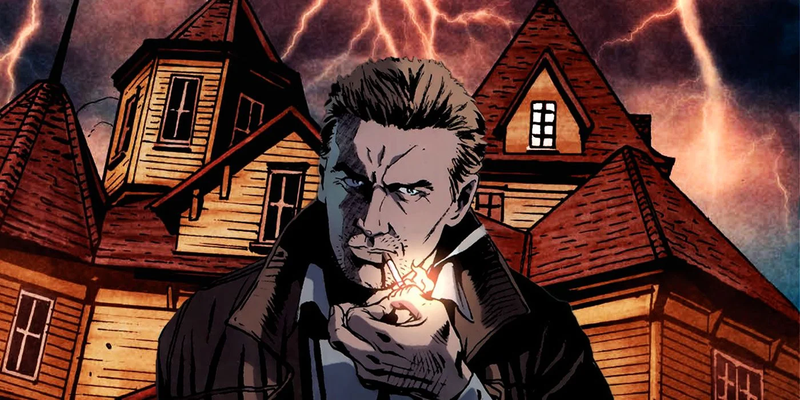 The House of Mystery wouldn't return to main DC continuity until around 2011. After a Crisis-like event called Flashpoint, the DC universe was fully rebooted from the ground up with some changes to entice new readers. One of these changes was the house's new owner: the one and only paranormal investigator, John Constantine. Constantine uses it not only as his home but also as a base for the Justice League Dark (supernatural heroes that tackle situations that the normal Justice League aren't equipped to deal with). Throughout The New 52, it's heavily hinted that this is the same house Cain once inhabited in the original horror series and, in turn, allows the reader to assume that this is the very same House of Mystery that Elvira herself occupied for that brief time in the 1980s.

Since the return of the House of Mystery it has appeared in numerous animated films such as Justice League Dark and its sequel Justice League Dark: Apokolips War. Perhaps most interesting though, is its appearance in the film Constantine: House of Mystery, which was released earlier this month. Following the events of Apokolips War, John Constantine finds himself trapped in the titular house, forced to relive his death over and over with seemingly no way to escape or seek refuge from it. The short film is lean, mean, and full of gore and revelations that will surely have lasting effects in the DC universe. Borrowing another page from the original series' roots, Constantine: House of Mystery also features other short stories based on DC's back catalog's wild, weird, and sci-fi-focused side. Overall it's a lot of fun and pays tribute to this legendary series, and cements its place in the modern DC canon. Between this and Elvira getting another comic book treatment, the time has never been more right to open the doors, take a seat by the fire in the House of Mystery and enjoy DC's lesser-known spooky side.