The prolific filmmaker breaks his silence. 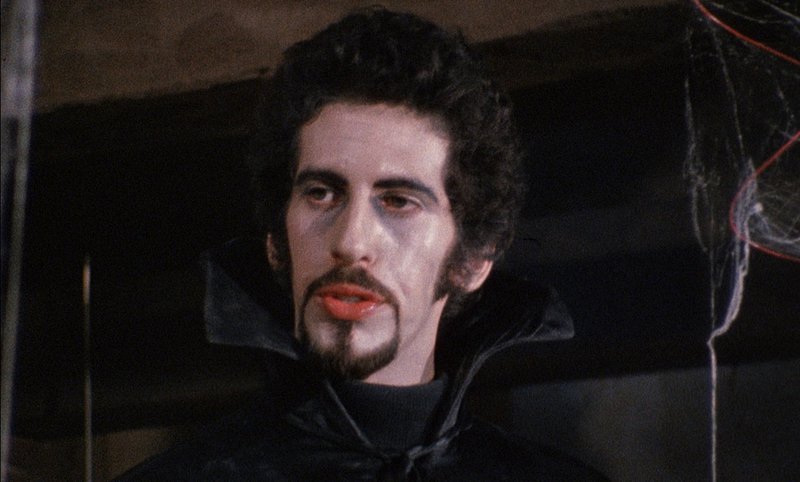 “Some of the folks on-line have called me the crazy, terrible, worst Dracula ever. They’ve called me Count Zappula, after Frank Zappa – ‘Who is this longhaired…?’ But it was so out of the box that I think that’s what people love.”

So says Raphael Peter Engel, who was born Roger Engel and was given the name “Zandor Vorkov” (by no less than Forrest J Ackerman) when he donned the plastic fangs and authentic Bela Lugosi cape to play the vampiric Count in Al Adamson’s Dracula vs. Frankenstein. Perhaps the best known of the prolific B-filmmaker’s output, the 1971 release has gained renewed attention recently thanks to David Gregory’s documentary Blood & Flesh: The Reel Life & Ghastly Death of Al Adamson, and the new Blu-ray boxed set of the director’s work, both distributed by Severin Films. In addition, producer Sam Sherman is bringing Dracula vs. Frankenstein and some of his other Independent-International favorites back to drive-ins across the U.S. this summer, beginning tonight at the Circle Drive-In in Dickson City, PA.

As a result, Engel has decided to break what has largely been a long-held silence about his days as Dracula, opposite veteran actor J. Carrol Naish as scheming Dr. Durea, née Dr. Frankenstein, and John Bloom as his hulking creation. Bloom was actually an accountant hired for his hulking size, and it has long been reported that Engel was a stockbroker pressed into service as the famous vampire. “That’s a misconception,” relates Engel, who was helping run a chain of record stores in New York City’s Greenwich Village in the late ’60s when an acquaintance got him into the fundraising business. “I was dealing with some people on Wall Street, and I knew a guy who was a partner in a small firm. I met Sam Sherman and Al Adamson, and they were working hard making their movies and looking for investors. So I said, ‘I know some people.’”

Engel set up a few meetings between Adamson, Sherman and the potential financiers, including that one partner. “He said, ‘We’re interested; we’re always looking for something where we can make money.’ We had a meeting down near Wall Street, and they talked to Sam and Al and made them a bogus deal, and they didn’t accept the offer, so that ended that. But because they were Wall Street guys, somewhere along the line it was misconceived that I was a broker. Somebody got ahold of that and spun it wrong, and I’ve been getting laughs about it.”

One of those get-togethers did result in Engel, who had “a little background in acting,” enacting one of the most famous and enduring characters in film history. “About the third meeting with Sam and Al, I noticed something was different. I said, ‘Al, what’s going on?’ and he said, ‘Ah, I’m not in a good mood today.’ They told me that they’d had John Carradine, who’d done films for them before, as Dracula, but his agent wanted a lot more money than they had talked about, and they didn’t have it. The way I remember it—which is different from the way Sam does – Al took a look at me and said, ‘He can do it,’ and Sam said, ‘What do you mean, he can do it? Nobody knows him, they know Carradine!’ Al said, ‘I have a feeling, I like to use new people.’ And the rest is history.” (He adds that there was never any discussion about cutting his hair or shaving his notorious goatee for the part.)

Dracula vs. Frankenstein, like a number of I-I flicks, went through a few permutations on the way to its final form. It began production as a stand-alone story called Satan’s Blood Freaks and then The Blood Seekers, before Sherman decided to salvage the substandard result by inserting cinema’s two most famous monsters. A few authentic props from the screen fiends’ Universal heyday also found their way into the film, including Dr. Durea’s electrical lab equipment, originally created by Kenneth Strickfaden for the 1931 Frankenstein. “I was wearing my cape and walked out on set,” Engel recalls, “and someone said, ‘Stay away from that, that’s live,’ because a spark could catch the cape on fire and we’d have a different movie! It became like another actor; it really enhanced the energy to have that much buzzing and crackling and spinning going on.”

Admittedly not a horror fan himself, Engel adds, “The only one I remember seeing when I was a preteen was when my father took me on my birthday to see Abbott & Costello Meet Frankenstein. And the cape I wore as Dracula was the one Bela Lugosi wore in that film! When I flew in for the shoot, Regina Carrol, Al’s wife, took me to Western Costume in Hollywood, where they’d reserved the cape. And when the guy went to get it, he said, ‘You should be proud, Bela Lugosi wore this cape!’”

Engel recalls Carrol, star of Dracula vs. Frankenstein and many other Adamson films, as “a sweetie. She was totally present, she was just such a nice human being.” Naish, on the other hand, “was ornery and he would snap, and it took a little while for me to realize he was in great physical pain. He was a good, longtime character actor, but he was at the end of the road. I think he felt this was not in his league, but he took the role, and it was the last thing he did.”

On the set, Engel says, Adamson was very easy to work with: “He was real low-key; he didn’t talk a lot. He kind of oversaw the whole thing, and Sam Sherman… if you can imagine someone circling the set, like a proud or concerned mother, he would make sure things were together. We’d be on the set and Sam would come in and say, ‘Hey, wait a minute!’ and we’d stop. Sam had all these great ideas, and we just went with them.”

One of those midstream decisions was to add the echo effect to all of Engel’s dialogue as Dracula. On another occasion, “I believe it was Sam who said, ‘Wait a minute, I’ve got another idea! Let’s put a light under [Engel] so he really looks ominous.’ So they put a light under me; nothing had been there before, and we were halfway in or wherever we were, and suddenly there was a light under me. And when they cut, I said, ‘I don’t know if you noticed, but that light was really bright and I blinked a few times.’ He said, ‘Don’t worry, we’ll cut it.’ And of course, they didn’t.”

The last major change made to Dracula vs. Frankenstein was the reshooting of the ending, when the original didn’t work. While the rest of the film had shot around LA, this new conclusion was staged in upstate New York, and with Bloom unavailable, “I got a guy named Shelly Weiss [with whom he had worked at the record stores] who really enjoyed this stuff. He was a big guy – if not as big as John Bloom – and he just loved doing it.” 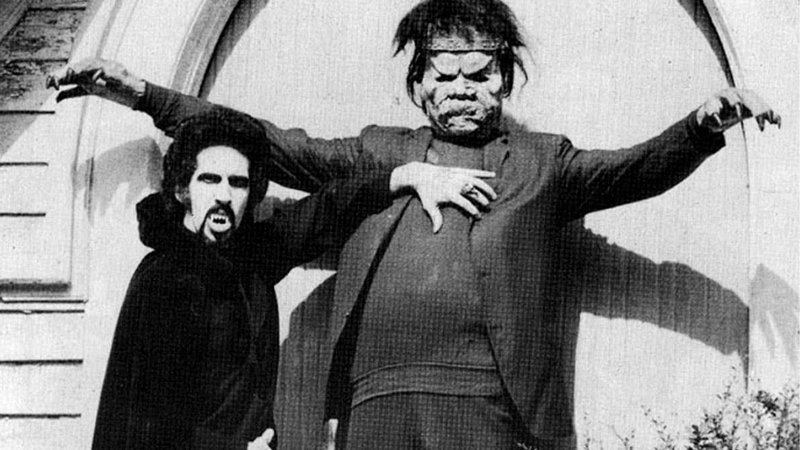 Engel wound up doing one more film for Adamson and Sherman: 1971’s Brain of Blood, in which he played Mohammed, an aide to Amir, leader of the country of Kalid whose grey matter is transplanted into a disfigured giant played by Bloom. He recalls the filming of a car-crash scene in which life almost imitated art: “They had done all the precautionary stuff; they blocked off traffic, and I was sitting in the shotgun seat, and they had a professional driver—I was told—and off we went. This guy built up so much speed, and there was a questionable moment around a turn, and I felt my heart going up in my throat. It was like, oh no, this is going to be for real! He was able to pull out of it, and Al’s a good guy—he was not one of those directors who would do anything for a realistic shot—but my life flashed before my eyes!”

After Brain of Blood, Engel left horror and film acting behind; he worked with people with disabilities and was a longtime member of the Asheville Playback Theatre in North Carolina. Then one day in 1995, he got a fateful phone call from Sherman. “He said, ‘Sit down,’ and told me Al had been murdered. I said, ‘Oh my God…’” Years later, after occasionally hearing from fans who had managed to track him down, Engel was contacted by Gregory to take part in Blood & Flesh. “David turned out to be such a gentleman, so respectful in how he approached this, and I thought, because it was not about me, it was about Al, I would do it. I wanted to honor Al.”

Blood & Flesh’s festival play and the disc releases have helped repopularize Adamson’s work, and his films’ revival in their natural drive-in habitat (with accompanying merch, pictured below, nostalgia gimmicks and personal appearances by Sherman and others) this coming season will further that. Engel first got a taste of just how significant a cult had grown around Adamson and the movies when he attended Blood & Flesh’s U.S. premiere at Hollywood’s Egyptian Theatre. “The entire theater was packed,” he remembers. “There were people on all the stairs, standing everywhere.” Several other cast and crew members were also there for a post-screening Q&A, “and David called me last: ‘We have Zandor Vorkov!’ I heard this ‘Ooooooh,’ and heads spun around, and my wife was like, ‘What is going on here?’ [Laughs]. I got a lot of questions, and all these people afterward asking me for autographs and photos. And everybody was calling me ‘Sir’; I think only two or three people called me Zandor!” 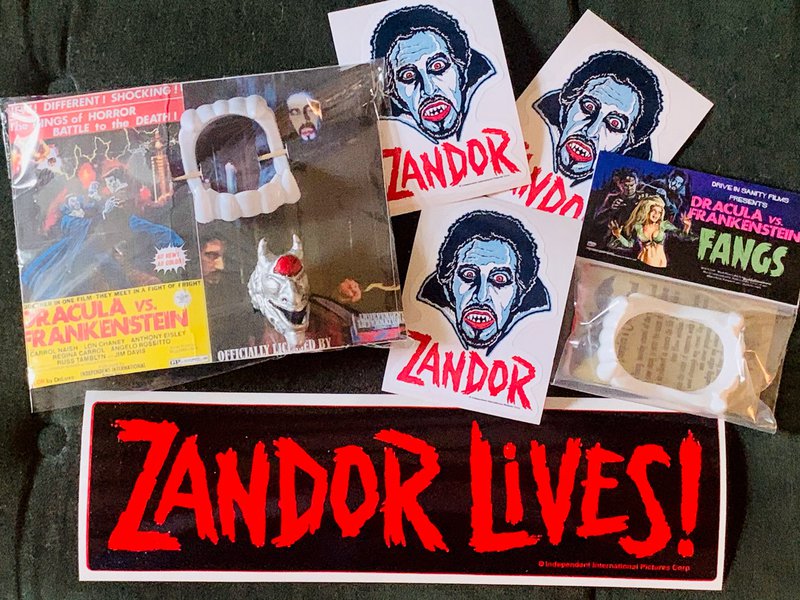 Black Horror And The Technology Of Monsters