Next week, THE KINGCAST celebrates its two-year anniversary. What have we learned? 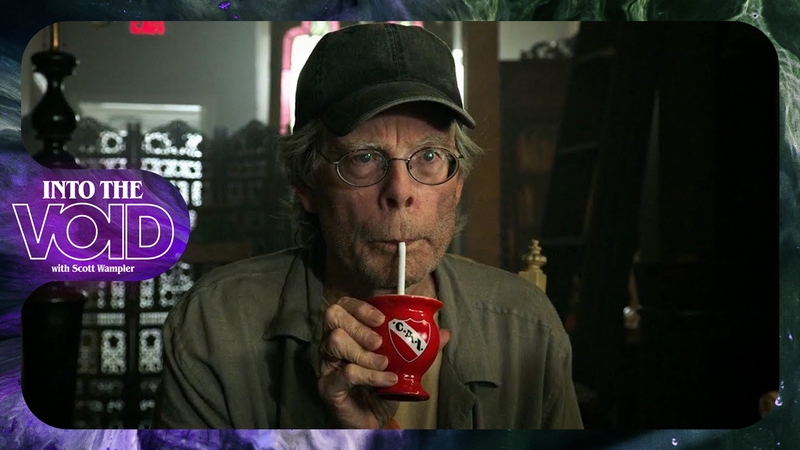 For the past two years, I have spent the majority of my time talking, theorizing, joking about, exploring, charting, and dissecting the work of Stephen King – everything from the relatively obscure short stories to the biggest, most iconic King adaptations Hollywood’s ever brought to the silver screen (sit down, Dreamcatcher, I wasn’t talking about you). Two years ago I might have reasonably referred to myself as a King fanboy, but now? Hell, I feel like I’m halfway to being a full-blown scholar. Pick at any subject long enough, soaking in every possible detail along the way, and I suppose that’s inevitable.

All this chatter’s been for a reason, of course. About two and a half years ago, my former movie-blogging colleague Eric Vespe invited me to lunch and, over margaritas, pitched me an idea he’d be toying with for a while: a Stephen King-centric podcast, one where each episode would focus on a different King adaptation. It’d be something like a book club, something like a film review podcast, and each episode would feature a special guest – all of whom, it went without saying, could be easily reached given the extensive “little black books” Vespe and I had put together over the years. We’d spent a cumulative three decades in the movie blogging industry, and in that time, we each ended up with an impressively deep list of contacts. Filmmakers, artists, authors, comedians. You name it.

“What’re we gonna call it?”

“How about The Kingcast?” he replied. 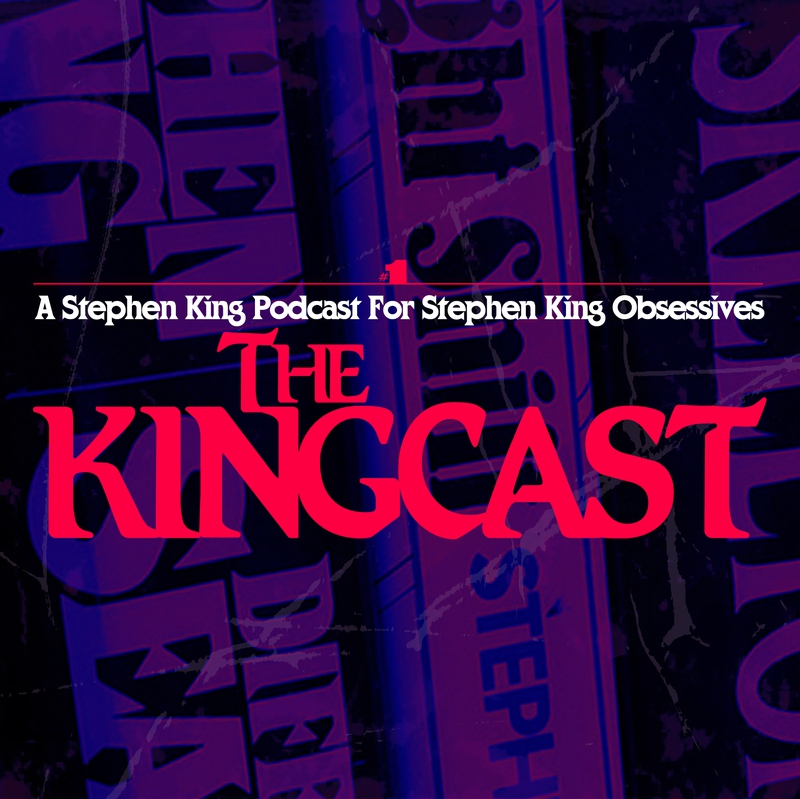 The show didn’t end up launching for quite a while. There were speedbumps along the way, former employers who maybe threw a few wrenches in the gears of us actually just doing the goddamn thing, but when the shit hit the worldwide fan in March of 2020, well … suddenly those speedbumps weren’t as much of a concern anymore. We immediately set to work, refining the general concept of the show (one inadvertently brilliant addition: allowing the guests to choose which title they wanted to discuss, rather than assigning them homework), lining up a few guests (if memory serves, Trick ‘r Treat director Mike Dougherty was the first to say yes), and conducting a “test recording” or two just to make sure we weren’t gonna shit the bed the moment we were actually on the line with a guest. By April of 2020, we’d begun recording in earnest.

With several episodes already banked, we decided to launch the show with Kumail Nanjiani, who chose The Running Man (1987) as his preferred title. Episodes with Dougherty, Karyn Kusama, Rob Sheridan, and Elijah Wood (who, at the time, had never actually read a King book; this was the first minor kerfuffle we got into with the listeners, some of whom were outraged that we’d do such a thing). These episodes are, quite frankly, impossible for me to listen back to now – the show had not settled into its rhythms yet, and to my ears, those episodes feel unforgivably clunky by comparison. And yet, rough around the edges or not, they found an audience, and soon we were on our way to drawing a crowd. Given that both Vespe and I were completely jobless at this point, that was encouraging. “Hey,” we dared to let ourselves think, “Maybe this could be a job!” 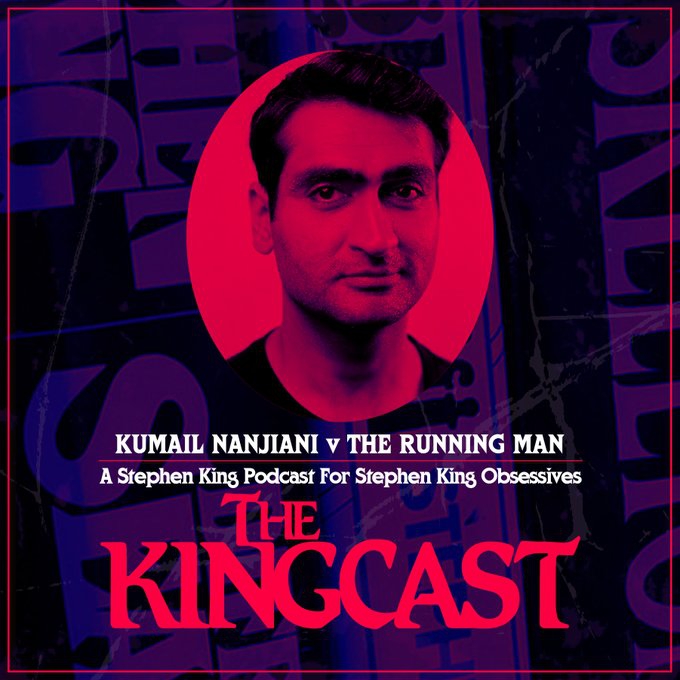 The show built its audience over the months that followed, and in the process, Vespe and I settled more fully into the roles the show clearly wanted from us: Vespe as the one with the better memory and the smarter things to say, me throwing curveballs into the conversation in the comic relief role. We also learned how to better prod the personal connections between our guests and Stephen King. Some of the conversations we had during that period were unexpectedly moving (Damien Echols, telling us about the 20+ times he read The Gunslinger while in prison, awaiting an execution he would eventually avoid). Some were flat-out hilarious (Sarah Beattie on The Lawnmower Man; best-selling author Mallory O’Meara inspiring absolute chaos on her first appearance on the show, talking Pet Sematary). Others straight-up stunned us with takes on a property that never occurred to us (KINGCAST guncle Bryan Fuller providing a queer reading of ‘Salem’s Lot, and – some months later – a trans reading on Christine). Even we didn’t know what we were getting into when we sat down to record. It all came down to what the guests themselves brought to the table, and the ways in which King’s writing had impacted their lives.

Eventually, around October of 2020, we found ourselves in a meeting with the good folks at FANGORIA, who were interested in adding THE KINGCAST to their burgeoning podcast network (shout-out to our pals Rebekah McKendry and Elric Kane over at FANGORIA’s other podcast, Colors of The Dark). My recollection of that meeting is that it went very smoothly, that we more or less had a deal by the end of it, and then it was just a matter of getting our contracts reviewed, signing them, and then officially joining the Fango Family in mid-November.

(Above: Deadline announcing that FANGORIA and THE KINGCAST were joining forces)

Somewhere in all that, we launched a Patreon, delivering weekly bonus episodes, interviews, and commentaries to our most Stephen King-obsessed listeners. These episodes allowed us to explore the Master of Horror’s output on an even more granular level. How about an episode devoted entirely to the depiction of erections in Stephen King’s work? Britt Hayes, who once operated the “Stephen King’s Boners” Tumblr account, joined us for that one. Interested in hearing from Michael Whalen, the artist who famously bookended King’s Dark Tower series with some of its most iconic images? Maybe people wanted to hear more on a cheap-ass Stephen King knock-off movie called Sharks of The Corn? (Note: they did not.) We even brought in Mike Flanagan and Carla Gugino for a Gerald’s Game commentary (and did a separate one with Mike, for the three-hour director’s cut of Doctor Sleep). Sure, we’d put quite a dent in the King canon over in the main feed, but the Patreon allowed us to get real weird with our love for the guy, not to mention the very particular and personal King takes of our guests.

Again, it cannot be overstated how important those unique takes are to the continued life and success of the show. In the two years we’ve been doing this, we have come to fully appreciate the scope of “Sai” King’s impact on … well, shit, just about everyone we talk to. The man’s body of work has impacted the lives of countless entertainers, artists, authors, performers, and musicians, often in very unexpected ways. Of course, we understood that King’s work was popular – he’s one of the biggest authors on the planet, a man with dozens of best-sellers under his belt who’s inspired a seemingly endless supply of movies, TV shows, comic books, concept albums, and even Saturday Night Live sketches (yes, we’ve done an episode on those, too; shout out to Uproxx’s Mike Ryan for helping us with that one). But it’s clear now that all of King’s financial success is evenly matched by the influence and inspiration he’s had on so many of our favorite people. It’s honestly kinda staggering. 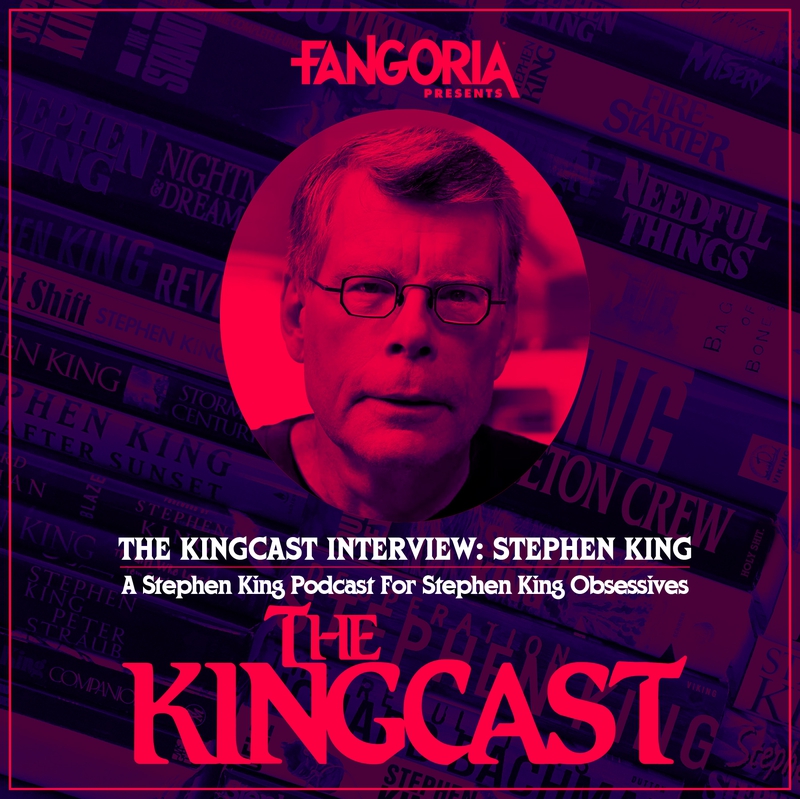 (Above: The show peaks entirely too early by booking The King less than two years into its run)

A few months ago, we managed to pull something off that, quite frankly, I figured would happen at the very end of the show’s run, if at all. Stephen King – having heard the show and us having contacted him through a complicated series of blackmailings, questionable witchcraft, at least one major heist at the University of Maine which has yet to be discovered, and, yes, the help of a mutual friend – agreed to sit with us for an interview. It is very, very rare that either Vespe or I get pre-show jitters or starstruck about a guest (again, most of the people you hear on the show are people we are at least passingly friendly with and have a direct line to), but this was something else entirely. This was our show’s namesake, for the love of God, and the weeks leading up to that chat found us planning questions (we came up with four pages’ worth, only managed to get through one of them in the hour we had with him), battling a nausea-inducing sort of anxiety, and crossing our fingers that the whole thing wasn’t some sort of cruel prank.

Of course, it wasn’t, and of course, we found the man to be everything we could’ve hoped for: warm, gregarious, a mischievous sense of humor thrumming underneath the surface of everything he had to say (it is one of the great highlights of my life that Stephen King told me to “get a life” after asking him a particularly nerdy question). We ended that call utterly shellshocked, stunned that we’d actually pulled this thing off and that King himself seemed to have such a good time doing it. The following day, we found that neither of us could quite remember the particulars of the conversation. The sheer adrenaline we’d felt before, during, and in the immediate aftermath of that interview had all but blotted out the memory. That tends to happen when one of your dreams comes true. 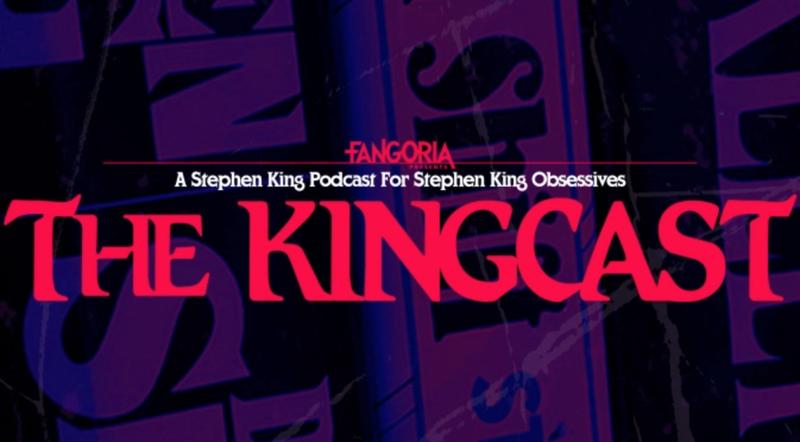 (Above: The current KINGCAST logo, featuring our FANGORIA overlords right up top)

So, what’s it like to talk about Stephen King for two years straight? Well, if you’re me, it’s been enormously fulfilling – not only as a fan, but also as a person who has bumblefucked his way into a very full-time job about my favorite author after having more than a few adults tell me I’d never get anywhere “with my nose stuck” in one of his books (joke’s on you, suckers). It’s been a privilege, an honor, and an absolute roller-coaster. I’ve learned things, I’ve made new friends, and stayed sane throughout the pandemic (er, mostly). I’ve laughed, I’ve cried, and I’ve stumbled into opportunities that I never imagined to be possible. Really, what more could you ask for?

In other words, can’t recommend the experience enough. Here’s to another two years, gang.