The Scariest Scenes in STAR WARS: 11 Times A Galaxy Far, Far Away Veered Into The Realm Of Horror 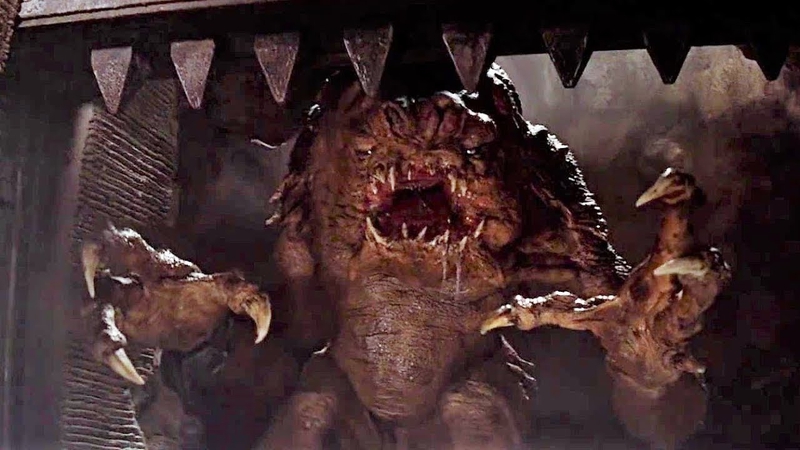 The intersection of horror fans and Star Wars fans is, of course, a wide one, filled with people who love practical effects, great creature design, and a peek into worlds that aren't our own. Now, no one is saying that Star Wars is horror, but the strength of the franchise has always been its ability to effortlessly draw from numerous genres.

So, in honor of the LEGO Star Wars: Terrifying Tales Halloween special, which was just released on Disney+, it is time to definitively (or, at least, chronologically) list out the best, scariest, most monster-filled moments from a galaxy far, far away.

1. The Cantina: In the summer of 1977, audiences were first introduced to a completely unknown movie called Star Wars, packed with battling spaceships, looming villains, and bickering droids. However, after about 45 minutes, the movie shifts, almost jarringly, to an alien-filled backwater bar, crawling with scaly creatures, bug-eyed patrons, and a giant praying mantis. The scene, scored with the equally alien Cantina band music from John Williams, further cemented the film as wholly unique, and helped kickstart a new generation of monster lovers. 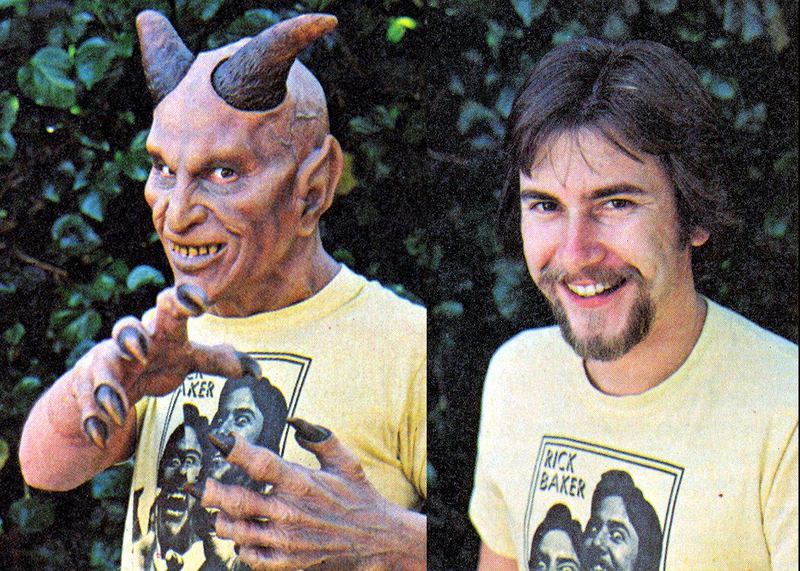 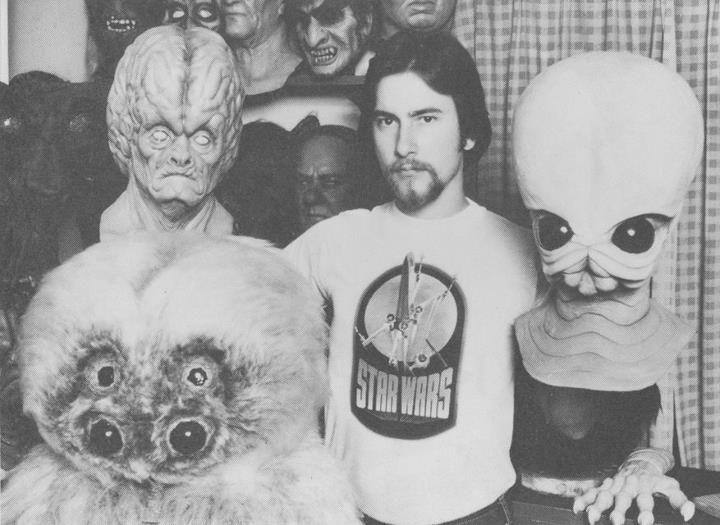 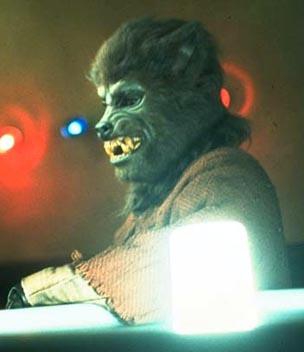 Behind-the-scenes, the American pick-up shots for the Cantina, filmed stateside earlier that year, were done by a young Rick Baker and friends (including The Thing's Rob Bottin). There's a reason why the Wolfman sitting in the bar might look vaguely familiar.

2. The Dark Side Cave: Following a classic hero's journey into (literal) darkness in The Empire Strikes Back, Luke finally confronts the Dark Side inside of himself, when he journeys into the mysterious cave on the swamp world of Dagobah. Surrounded by snakes and fog, Luke finds himself face-to-facemask, dueling that darkness, as personified by a menacing Darth Vader.

The confrontation ends, revealing itself as a Force-induced vision…and with a decapitated Vader, whose helmet explodes to reveal Luke's smoldering head. 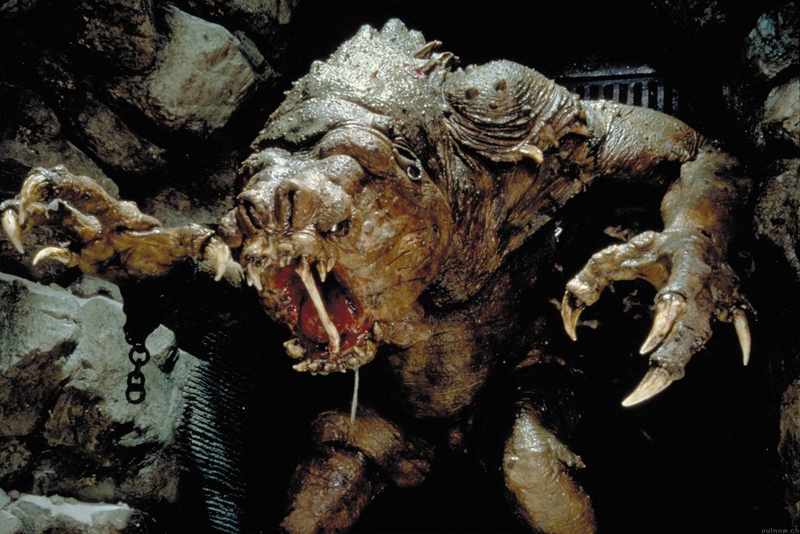 3. The Rancor: Initially meant to be a classic "man in suit", Phil Tippet (who would eventually work on Robocop, Jurassic Park and Starship Troopers) and his ILM Creature Shop eventually designed a beautiful puppet for Return of the Jedi, with just enough drool (and even a hidden earring), to make this scraggly skinned monster scary and menacing.

The creature's movements are jarring and still believable, with the roars of the monster echoing through the dungeons of Jabba's palace, until its untimely end.

4. Galaxy of Fear: After the Original Trilogy ended, the '90s began a new period of creative output, primarily focused on publishing and video games.

One such series, Galaxy of Fear, was an obvious attempt to attract the Goosebumps-loving crowd. Following the adventures of Tash and Zak Arranda, Galaxy of Fear shone a light on boneworms, "Nightmare Machines", and brain spiders. The series also had incredible "Limited Collector's Edition" holographic covers that have truly never been topped.

Recently, the adventures of Tash and Zak have been brought back into the modern spotlight, with a wonderful story in IDW's Star Wars Adventures #10 that came out just last week from Dave Scheidt and Stefano Simeone. Now to bring back those holographic covers 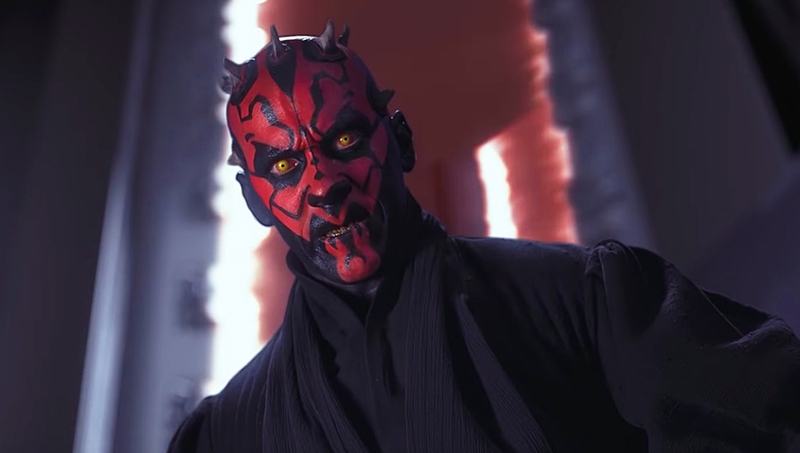 5. Darth Maul Literally Looking Like the Devil: A new trilogy meant new villains, and the face of The Phantom Menace, Darth Maul, was immediately striking (and also vaguely Tim-Curry-esque).

Tattooed and horned, the Sith apprentice drew comparisons to the devil, becoming one of the most iconic new additions from the prequels. One of the most legitimately frightening visages in the entire canon, he could have been even scarier, as evidenced by pre-production concept art. 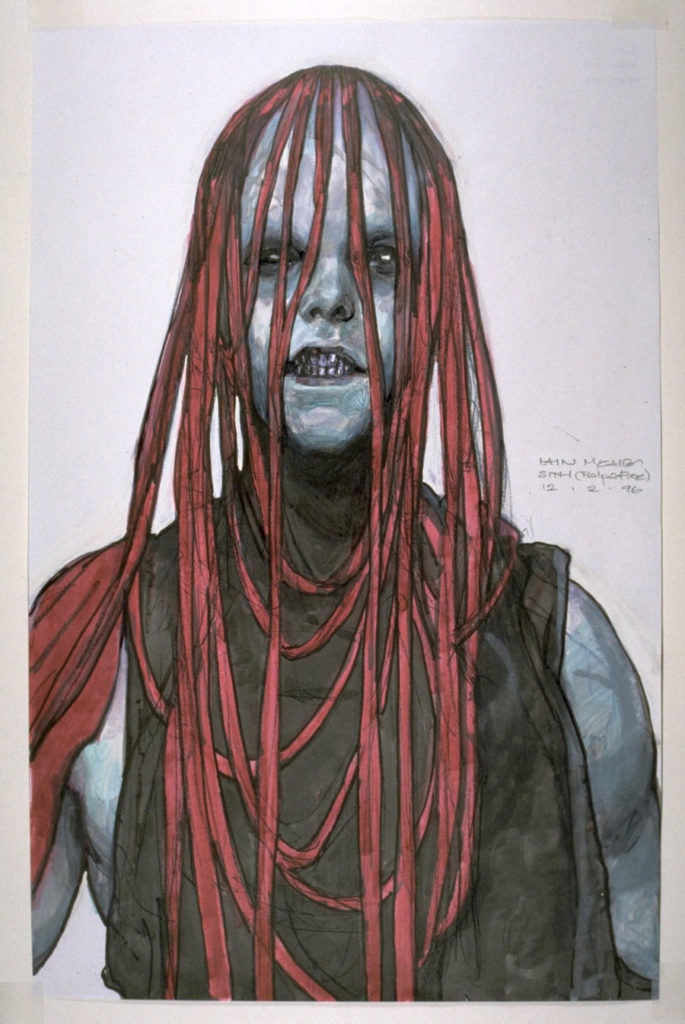 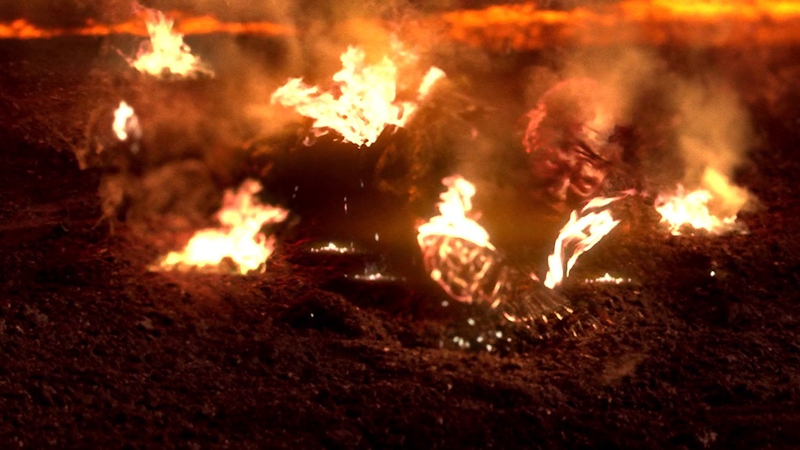 6. Anakin Burning Up: Surprisingly, Revenge of the Sith has a couple of instances of what could be construed as true body horror, with scenes like Palpatine getting his face melted off. But the PG-13 rating (the franchise's first) came solely because of the lava scene near the end of the film.

Fans knew it was coming, ever since the original novelizations, but what they didn't know was just how far they would push the frightening effect of the hero, Anakin Skywalker, getting engulfed in flames. Future Academy Award winner (alongside Rick Baker for The Wolfman) Dave Elsey and Lou Elsey crisped up Hayden Christensen for the scene, which serves as a horrifying origin story of the man behind the mask. 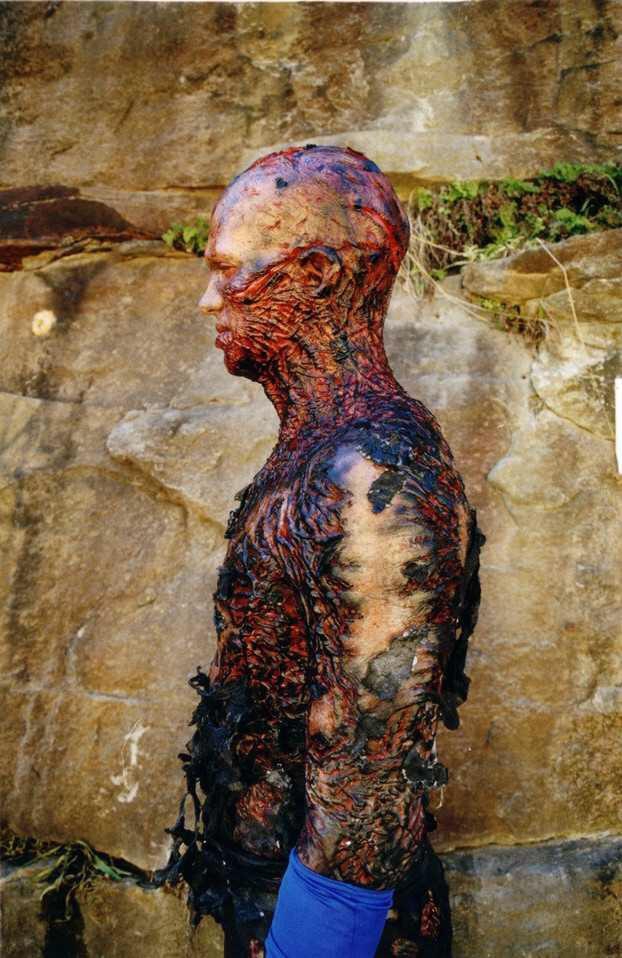 7. Death Troopers: In this 2009 novel, a grey goo virus infects an Imperial prison barge that Han Solo and Chewbacca are being held captive on. Those infected become undead, and the typical zombie tropes play out…but, this time, in space.

Spawning a sequel (entitled Red Harvest, a tongue-in-cheek reference to Return of the Jedi's secretive filming title), the book was wildly popular, spawning merchandise and more zombie stormtrooper cosplay at conventions than you can believe. "Horror Beyond Imagination," indeed.

8. Zombies and Brain Invaders in The Clone Wars: Stormtroopers can't have all the fun. In the animated series The Clone Wars, an arc occurs where, in one episode, alien zombies attack a Jedi rescue mission and, in the next episode, the brain worms that caused the zombies begin to infect a troop of clones.

The end result is surprisingly gnarly for a show that aired on Cartoon Network. You know, for kids. 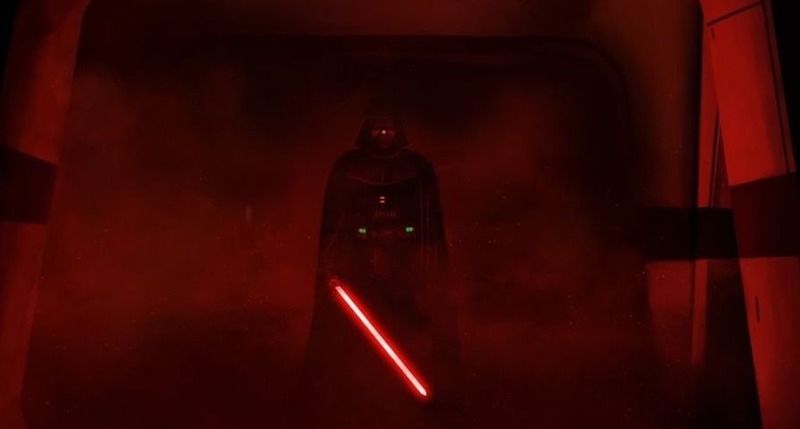 9. "The Hallway Scene": Hearing only labored breathing and then the ignition of a crimson lightsaber, fans finally got a chance to see Darth Vader in his full power, as he easily dispatched an entire corridor's worth of terrified Rebel troopers in Rogue One. The horror in the eyes of these victims is legitimately terrifying upon first watch, adding even more gravitas to one of the most iconic villains of all time. 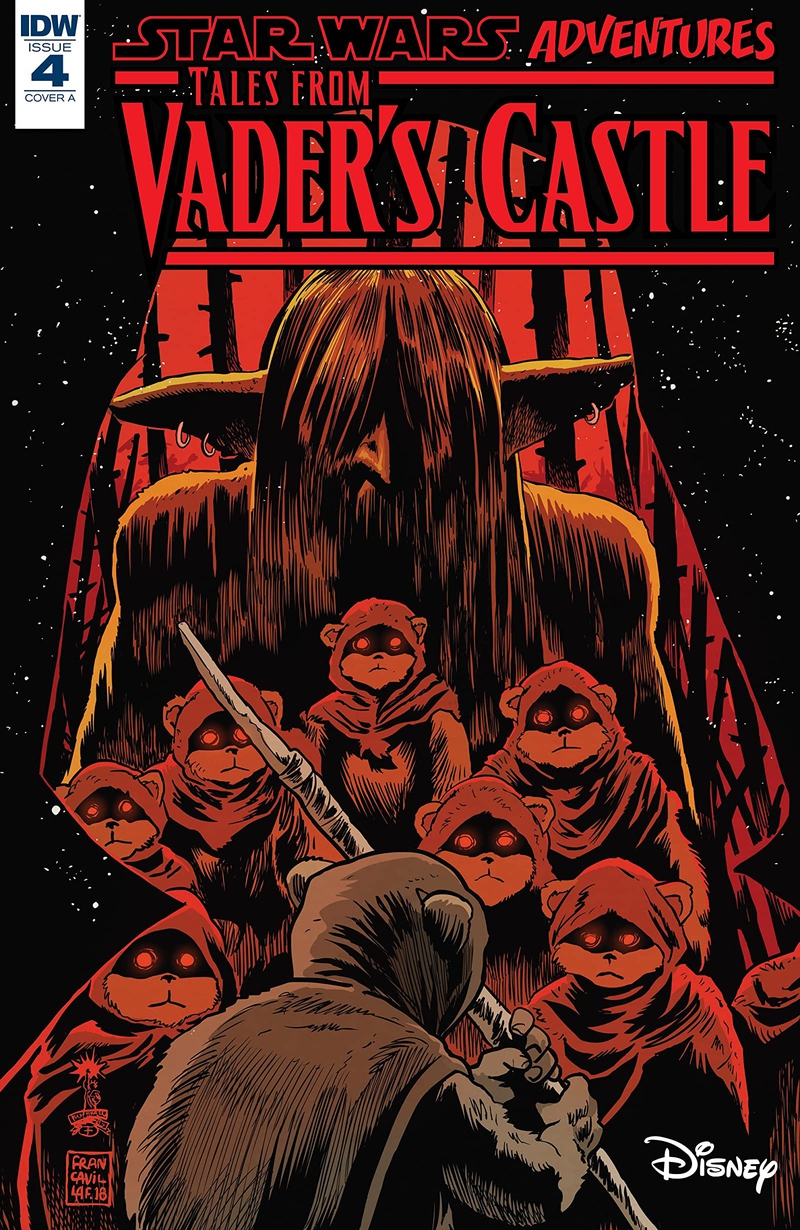 10. "Tales from Vader's Castle": IDW Comics has now put out four volumes of comics in their Star Wars Adventures series, revolving around these spooky Tales from Vader's Castle. Written by Cavan Scott and with beautiful covers and interior framing illustrated by Francesco Francavilla, each issue packs just enough frights and fear.

This year's installment, Ghosts of Vader's Castle, is currently ongoing and is a fantastic (and beautiful) look at the darker side of Star Wars.

11. Ice Spiders: In the second episode of Season 2, The Mandalorian took its titular bounty hunter to the remote wintery world of Maldo Kreis, where the crawling "knobby white ice spiders" finally made their live-action debut. Initially appearing in Ralph McQuarrie's concept art for The Empire Strikes Back in the early '80s, getting to see them brought to life, with green blood and webbing shot from their mouths, was a real treat. 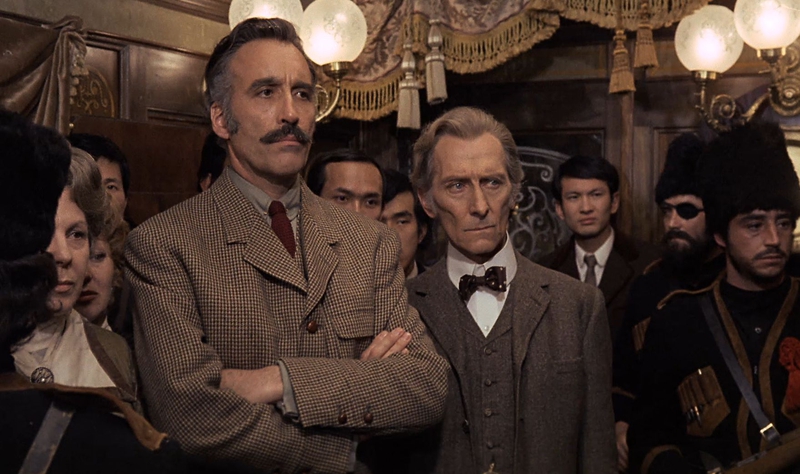 Dave Prowse, who originally filled out the Darth Vader costume, also got his start in Hammer films, playing Frankenstein's monster in Horror of Frankenstein.

LEGO Star Wars: Terrifying Tales is out now on Disney+. Click below to watch now. For a full write-up of the numerous easter eggs, check out our article detailing the incredible references to The Lost Boys and more!