The horror of fashion. 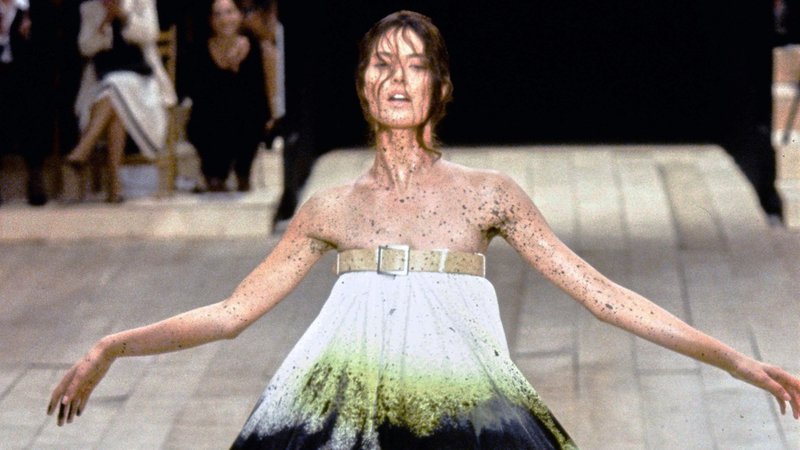 To myself and many other horror fans, the height of fashion is a sweet leather jacket to go over the standard black tee shirt. A graphic tee when we want to get a recognition head nod from other genre fans in the wild, maybe a flannel. For most of my adolescence, my fashion statements centered around the desire to advertise to the world, "Please, don't look at me." As a tween that developed pretty early, being absolutely stacked before I could even figure out long division meant living in a gross, smelly, oversized hoodie 24/7. I wanted to be small, to disappear, to hunch over, and live in the background.

This lasted until the Halloween that I decided to go as roadkill, an idea borne from last-minute preparation and a growing fascination with dead things. I painted rubber skid marks on my tee-shirt, blacked my eyes, covered myself in lacerations and red corn syrup. My mother had family over that evening, so I excitedly ran into the living room to show off my new mangled look. Ma slapped a hand over her mouth. My aunt gestured the sign of the cross. I set out to disgust, and succeeded. Through the way I dressed, I changed my narrative from "Please don't look at me" to "You'll look at me the way I want you to look at me. Fear me."

The idea of making yourself look untouchable, using the grotesque as a suit of armor, is synonymous with the late designer, Alexander McQueen. "I want people to be afraid of the women I dress" was his mission statement and precisely what drew me, a woman that has used a plastic grocery store bag as a purse, to the world of high fashion. I didn't know much about hemlines or what colors you couldn't wear after what holidays, but I knew the power that comes from horror, and clearly, so did he.

Ever the fan, he drew ideas from films like Tony Scott's The Hunger, which inspired his 1996 collection of the same name. It was a vampire-inspired line filled with leather and romantic goth pieces. The piece in the collection that sent the fashion world into a tizzy featured a transparent bodice filled with live worms. You don't really have to know much about couture to know garments on the catwalk were not typically made with materials found in a bait shop. 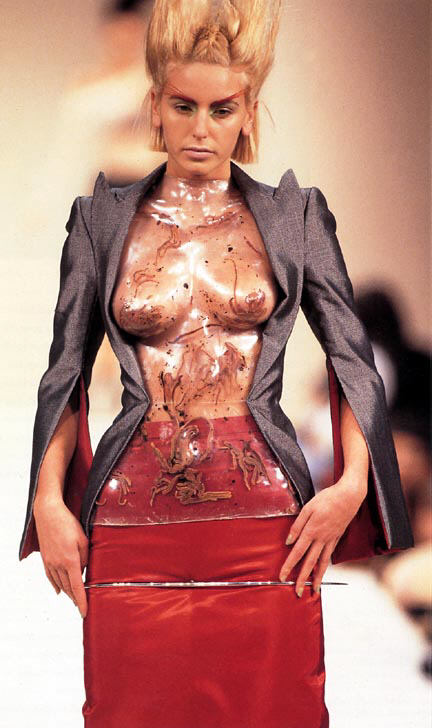 His 1999 collection, The Overlook, was a loving tribute to his favorite director, Stanley Kubrick. The snow on the runway, models in warm knits, and a pair of grey clad twins were a more obvious nod he said touched on the "romantic side of the film." I've always loved his ability to effortlessly find the soft and the beautiful within the grisly and the ghastly. They cannot exist without each other. Who amongst us hasn't looked at the spurts of vermillion and glistening gore in a slasher flick and remarked to a friend, "That's a really lovely shot."

Personally, I feel a special affection for his 1995 collection, The Birds. Named for the Hitchcock film, McQueen took inspiration from his fondness for women that thrash and claw their way to survival. The models strutted on the catwalk in ‘50s Hitchcock inspired silhouettes, something the fashion world has taken inspiration from before. McQueen, however, subverted expectations by making the Tippi-inspired models less the standard chic, pretty little things, and more things to dread. They were covered in tire marks, their eyes obscured by white opaque contact lenses, their clothes tattered. Looking at them made you uneasy. These Hitchcock Heroines weren't victims – he never wanted his models to look like victims. He wanted them to look intimidating. To find power in their exterior. 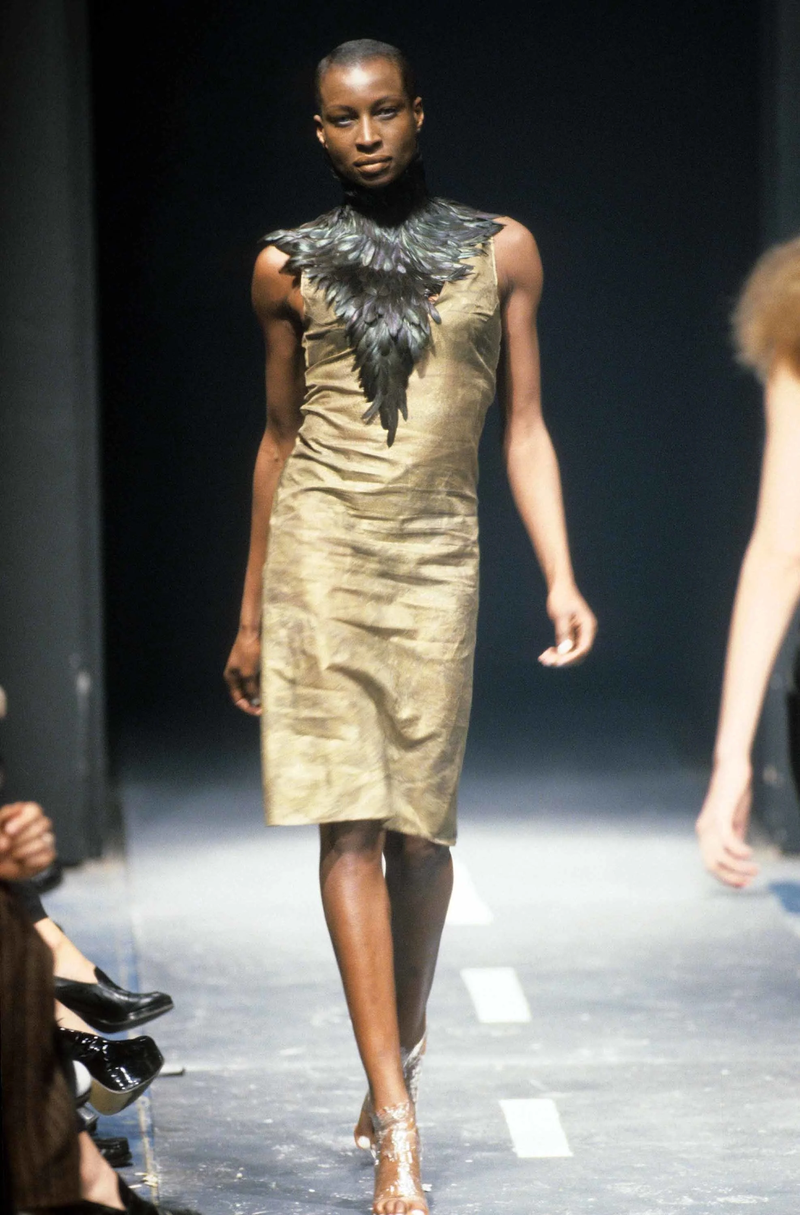 The Birds, along with some of his more violently themed motifs, were also the first that drew criticisms of misogyny, accusing the designer of creating nothing more than visions of battered women. Fans of horror, especially women, are no strangers to claims like this. Horror has long faced scrutiny for being misogynistic despite being so popular among women. While some of the criticisms are founded in reality, there is an agency among scream queens that aren't typically afforded to women on screen. McQueen’s runway models were cut from that same final girl cloth.

Many of his models wore bindings, headgear, and restrictive devices resembling objects found in medieval torture chambers or really rad modern sex dungeons. His work has always shown reverence for the suffering a character must endure to survive until the end of a film. It's that kind of intimacy and empathy that sits at the heart of many beloved horror films. It's a widely held misconception by most who don't enjoy horror that avid watchers of the genre have a low threshold for empathy. Genuinely terrifying horror cannot exist without it. Caring about what happens to the main character makes their journey so much more petrifying. It's what makes it so much more satisfying when they're the last one standing. It's one of the few genres where the direct effect is making the viewer feel what the subject on screen is going through. McQueen built this kinship with his characters on stage without needing to even utter a word. 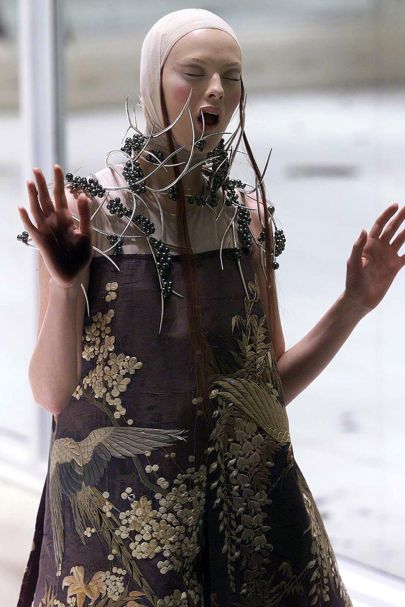 His work had flirted with the sinister long before his horror movie influences were more overt. During his 2001 Spring/Summer catwalk named VOSS, audiences had to undergo an hour of staring at their own reflection. The mirrored walls later revealed trapped models in a padded white cell on the other side of them, invoking motifs found in films such as Frank Darabont's Green Mile or Miloš Forman's One Flew Over the Cuckoo's Nest. For an industry that typically centers its shows on observing bodies as objects for consumption, turning the knife onto audiences was revolutionary – and precisely why I loved horror in the first place. The uncomfortable voyeurism, the ugly reflections of the worst parts of us, and the flair for the dramatic.

Alexander McQueen would have been 51 in March. I often find myself wondering what movies since his passing ten years ago would have graced his runway shows. Midsommar would have made an incredible spring line. An It Follows line would have shocked and dominated Fashion Week. I already dress like The Babadook, so that would have been a launch to covet. His influence changed an industry that largely saw women as a commodity to be sold. He gave autonomy to society's soft, imperfect, and ignored. I've never owned a McQueen piece myself, but his impact changed the way I get ready in the morning. I no longer look in the mirror and think, "How can I best blend in today?" I open my closet door and ask myself, "So who am I going up against today?"