Mummified heads and ritual sacrifices: we're going deep into spoilers and counting down our favorite horrific moments in THE NORTHMAN 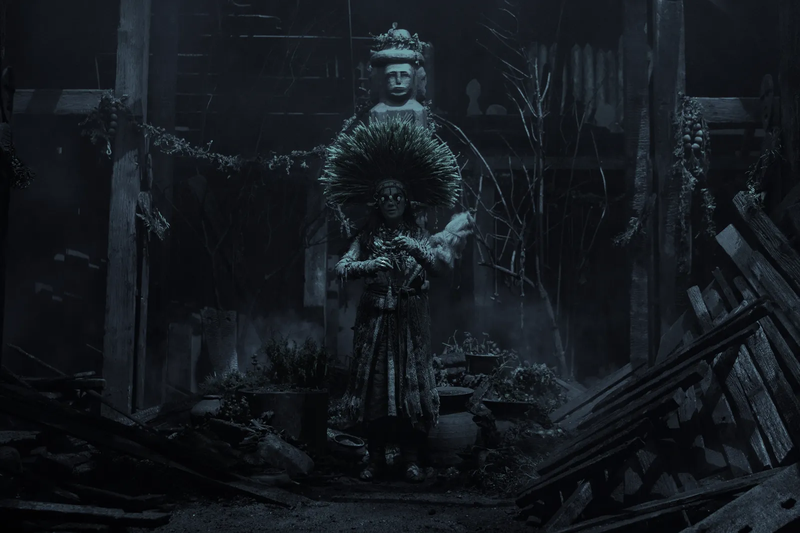 As any student of history knows: our past is horrifying. Viking mythology is no exception. It is, perhaps, the rule. Anya Taylor-Joy (Olga) and Aleksander Skarsgård (Amleth) have said in interviews, historical accuracy is clutch to director and writer, Robert Eggers: "You know when you're doing a Robert Eggers movie that if it says 'they walk across you know, volcanoes and glaciers and whatever', we will be walking across volcanoes and glaciers. You'll just be straight in it."

So when Robert Eggers, the creator of the scariest film I've ever seen (The Witch) gets his budget inflated more than tenfold (they're saying between $70-90 million), I expect to be scared.

With no further ado, here are the ten biggest horror moments in The Northman, which is, they say, an action movie, not a horror film.
[A Warning: LOTS of spoilers below! If you haven't seen the film yet, bookmark this page, watch it, and read AFTER!] 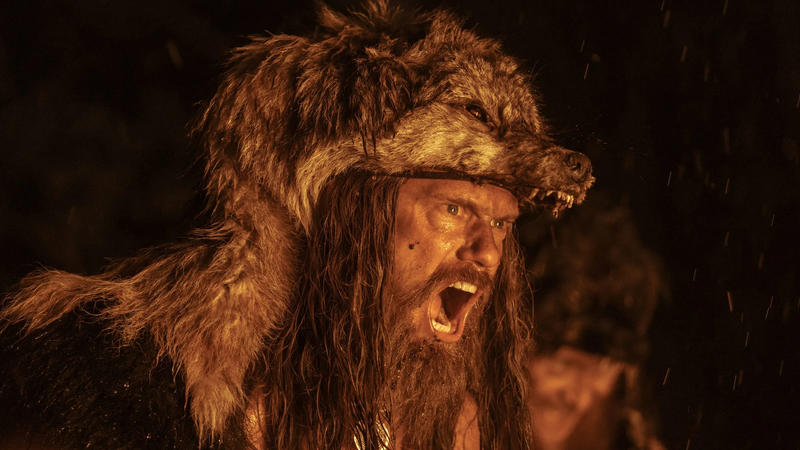 1. The transformation of the berserking Sons of Fenrir scene sure looks like the prototype for a werewolf transformation to me! While the existence of a "true" berserker—not a metaphor for an evil spirit—is debated among historians, its depiction in the film is real AF. I have my He-Witch (Ingvar Eggert Sigurðsson) beating a drum and chanting invitations for the wolf spirits to possess the warriors' bodies… and they do! Skarsgård's eyes roll back in their sockets alongside his fellow berserkers as they dance in scanty woven underwear around a bonfire, fall to all fours, and howl in preparation for their killing.

2. I know Willem Dafoe's mummified head is a prop and not his actual head. I know this. And yet. When the same He-Witch gleefully explains that this skull shrinkwrapped in skin is Heimir's head, I couldn't help but think… obviously. And when the shaman explains that the bastard King Fjölnir (Claes Bang) cut out his eyes and tongue, and they replaced them with new eyes and tongue, I was like, Mm hm, I see what you did there, with the mouth.

Seriously, though, the visual effects team deserves a standing ovation for these practical effects, am I right? 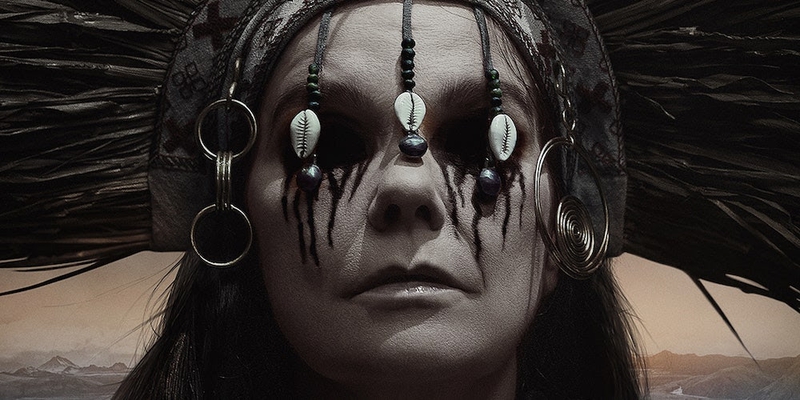 3. Bjork. On her own, the primal nature of the pop star's presence alone is eerie, not to mention her iconic ASMR whisper-voice, but in The Northman, she plays a blind seeress who visits Prince Amleth in one of his several prophetic visions. When she turns around from the idol she faces, viewers can see her incredible headdress made of barley, her still-bleeding eye sockets with cowrie shells hanging over their caverns, and while she tells Amleth her vision, she spins wool in the old-fashioned Viking way, which alludes to Amleth's "threads" that connect him to the past and future. One of the most powerful elements in this film (and, really, in Eggers' other films as well) is the dedication to accuracy regarding costumes (let's get Linda Muir an award, too!), and the seeress' ensemble is the best example of how history is terrifying.

Costume designer Linda Muir says, "Norns [ancient Viking women who control fate]. They don't weave thread, but intestines in determining people's fates." The spinning of wool reminded me of the Greek Fates, because I'm not a historian who specializes in this period, but whereas the Fates number three, I only need one of this spooky bitch, I'm telling you.

If you want to see Bjork's prophecy, click here. And pay attention to that foley work… what do you think they used for the sound effect of the ancient method of spinning wool?

4. Regarding the ultimate murder of the noseless asshole (Eldar Skar), I don't have anything really profound to add except for, Man, sliding that mythic sword straight through that lackey's sinus cavity was one sick kill. 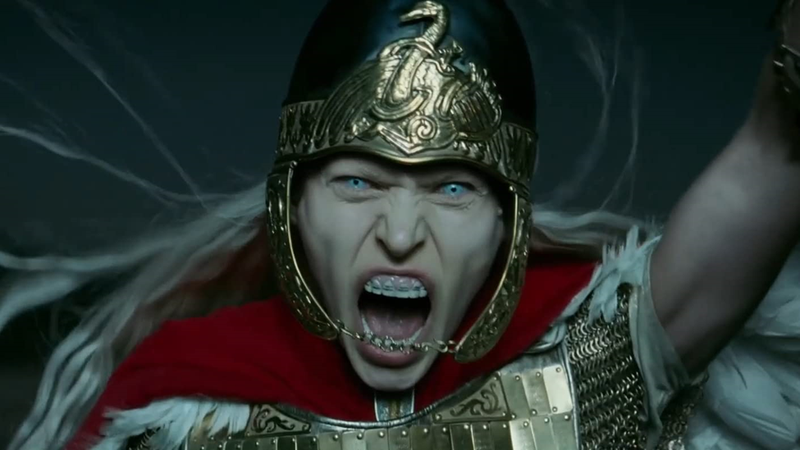 5. To say the image of the Valkyrie (Ineta Sliuzaite) riding into Valhalla with Amleth's corpse across her horse was an epic after-death image is an understatement. Eggers said in his GQ interview, "the Valkyrie is not wearing braces. Many Viking skulls have been excavated that have horizontal grooves carved in their teeth. The current favorite theory is that perhaps those grooves were filled with colored enamel. And that it was just to look cool." It does, girl. It looks very cool. And with her white-blonde hair and ice-blue eyes… this is the very woman whom I want to escort me into Viking heaven. 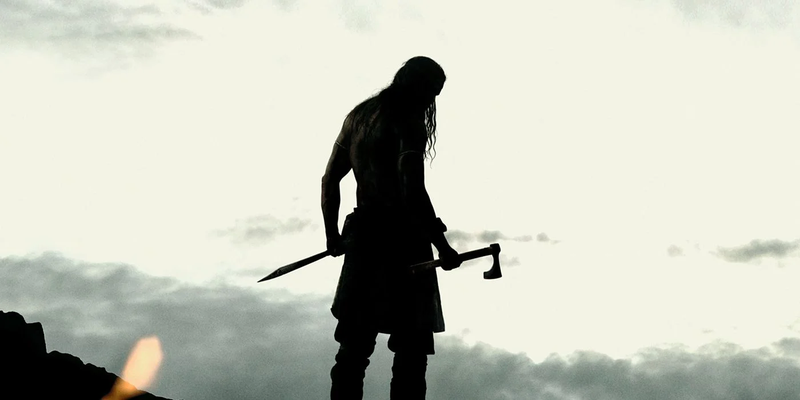 6. Creature Feature aficionados will tell you that the longer you can suspend the movie without showing the Creature, the scarier the movie is. Once you see it, it lives outside your imagination, and you're able to contain it. In similar logic, viewers never get to fully see the bodies stapled to the side of the thatch roof when the village people think a demon is terrorizing them. We only see the massacre obliquely, in the background, only slightly in frame as another shaman says something to the effect of, "This violence is not human."

7. The human sacrifice switcheroo. That same woman shaman is the one who decides a human sacrifice is necessary to appease the demon who's murdering everyone in the village. Before she can enact this fate, though, the demon (Amleth, in fact) pulls the old switcheroo: he lets the chosen sacrifice free, hog-ties the shaman, and drains the blood of another henchman onto her immobile body.

8. More ritual sacrifice. While we're acknowledging the fact that Viking culture is, in retrospect, basically a death cult, let's talk about how after Amleth kills his younger brother, the village performs a ritual sacrifice of that slain brother's wife. She even goes along with it, reciting the lines from the ritual of her own volition before drinking what we're to assume is something poisonous and/or numbing from a ceremonial horn. 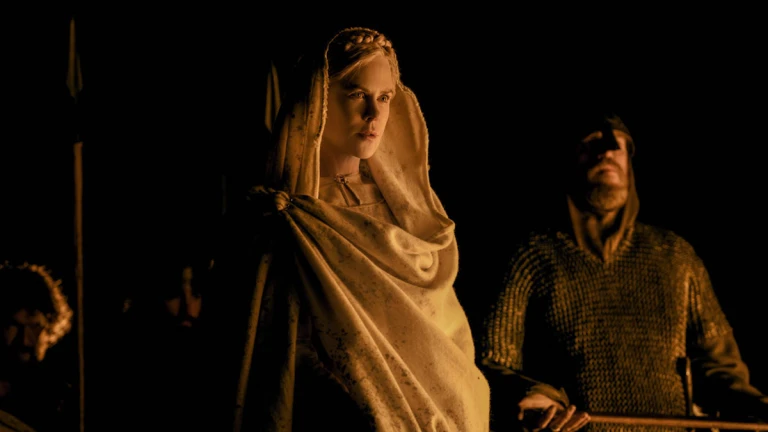 9. The love between a mother and son. It's no secret that The Northman is based on the Viking saga that was William Shakespeare's source material for Hamlet. Everyone knows that plotline, roughly, but the moment when Gudrún (Nicole Kidman) reveals that she was King Aurvandill (Ethan Hawke) 's literal trophy wife, his favorite of his Christian slaves, this narrative gets much psychologically darker than Hamlet ever ventured. Especially when Gudrún approaches Amleth with the possibility that she can be his queen next, and the kiss or kill distance between mother and son goes in the worst direction. 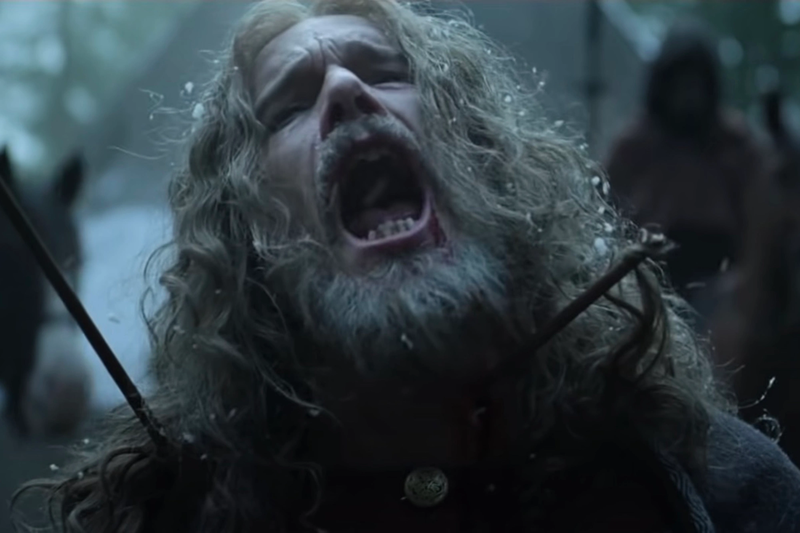 10. The entire premise is horrific. Even the nine horror moments above don't quite sit the same as the shocking reveal of Gudrún revealing to her son, who has come to free her, that he is a child of rape, and for that reason, she never loved him. In fact, it was her order that called for his death. I get that Gudrún might be a surprise villain for many viewers, but to me, it was more so a knife-wrench to our hero than any judgment on Gudrún. His wrath is knocked off course, and it begs the question: was all this effort worth its end?

The Northman might tell one of the oldest stories in history, but it's a truly novel experience. As Gabriella Paiella notes, "Most movies of this type don't get the $90 million budget these days—that's going towards more CGI-heavy productions." Robert Eggers responded, "Yeah. And so, please, even if you don't like this movie, root for it, because there should be more."

The Northman is now in theaters, check out our exclusive Convo X Fango with director Robert Eggers.