Courteney Cox reveals that she has finished filming on SCREAM 6, which is due to hit theaters early next year. 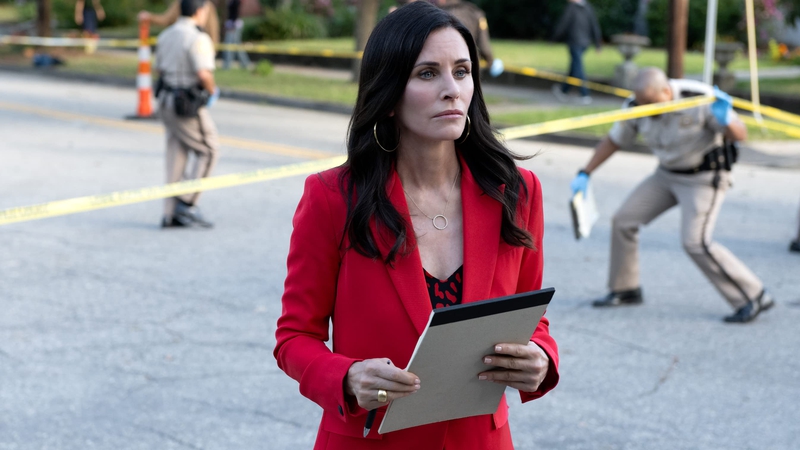 We are one step closer to having another day at the movies with Ghostface, as Courteney Cox has revealed she has finished filming on Scream 6. That doesn't mean the movie is entirely in the can, but one of the biggest stars is finished with her end of the bargain, at least. Cox, who will once again be reprising her role as Gale Weathers, revealed the news on Instagram with a video that features a certain masked killer who simply won't let her have a moment's rest.

The official Scream account even replied to the post on Instagram saying, "I'll be there for you," in reference to Cox's many years on Friends. But aside from her role as Monica on the long-running sitcom, Gale Weathers is by far her most enduring role, and with most of the legacy cast not returning for the upcoming entry, Cox is left to carry the torch. Unfortunately, the studio could not reach a deal with Neve Campbell, so she will not be returning as Sidney Prescott this time around.

As one might expect, plot details are being locked up good and tight for the time being. What we do know is that Scream 6 will be taking the action somewhere new, specifically New York City. A very, very brief synopsis for the film explains that the latest installment "continues with the four survivors of the Ghostface killings as they leave Woodsboro behind and start a fresh chapter." That means the surviving cast members from this year's film will be returning as well. This includes Melissa Barrera as Sam, Jasmin Savoy Brown as Mindy, Mason Gooding as Chad, and Jenna Ortega returning as Tara. Additionally, Hayden Panettiere is returning as Kirby from Scream 4, with Dermot Mulroney (Insidious: Chapter 3), Henry Czerny (Mission: Impossible), Tony Revolori (Spider-Man: No Way Home), and Samara Weaving (Ready or Not) also joining the ensemble.

There will be plenty of new blood in front of the camera but much of the team behind the scenes is returning from Scream '22. Matt Bettinelli-Olpin and Tyler Gillett are back to direct, with James Vanderbilt and Guy Busick penning the screenplay. Kevin Williamson, who wrote the original slasher classic, is also returning to executive produce. Williamson penned Scream, which Wes Craven directed to much success in 1996. Craven directed every entry in the series prior to his passing in 2015.