SQUID GAME: Saw Traps And Some Not So Cheap Thrills 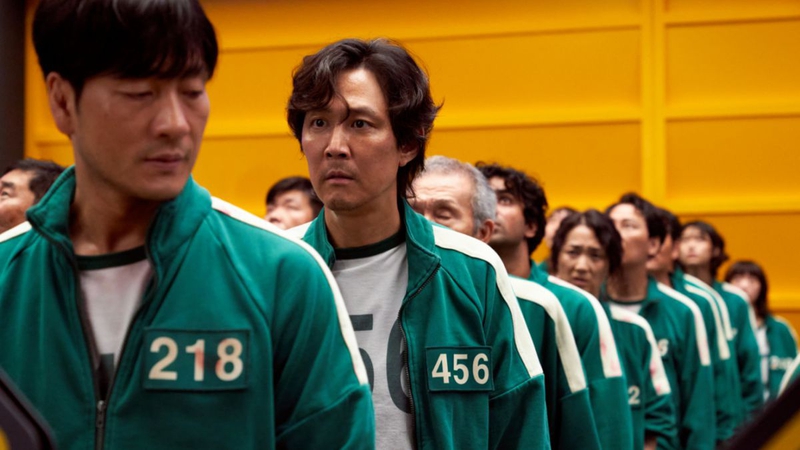 There are some easy touchstones to draw upon for genre fans to give Squid Game some context: Battle Royale, Saw, Cheap Thrills, and more. The ways they overlap with the new Korean-language Netflix series (and overlap with each other) are what makes the comparisons interesting, but once you’ve finished watching it all, they ultimately prove as reductive as a Twitter reaction hastily fired off after watching any one of its episodes.

Creator Hwang Dong-hyuk reportedly wrote the script back in 2008 but could not attract interest from a producer or distributor until 2019, which serves as an object lesson in patience and persistence fledgling storytellers should remember when pitching their own projects. But Hwang’s story of a contest between 456 cash-strapped strangers, inspired specifically by South Korea’s class disparities, offers some profound and depressing observations not just about the politically corrupt systems of his native country, and by extension, the capitalistic cultures of America and other wealthy countries around the globe, but the pull-yourself-up-by-your-bootstraps mentality that simultaneously undergirds their barometers for success and keeps individuals shackled in cycles of poverty. It also happens to be pretty fantastic. 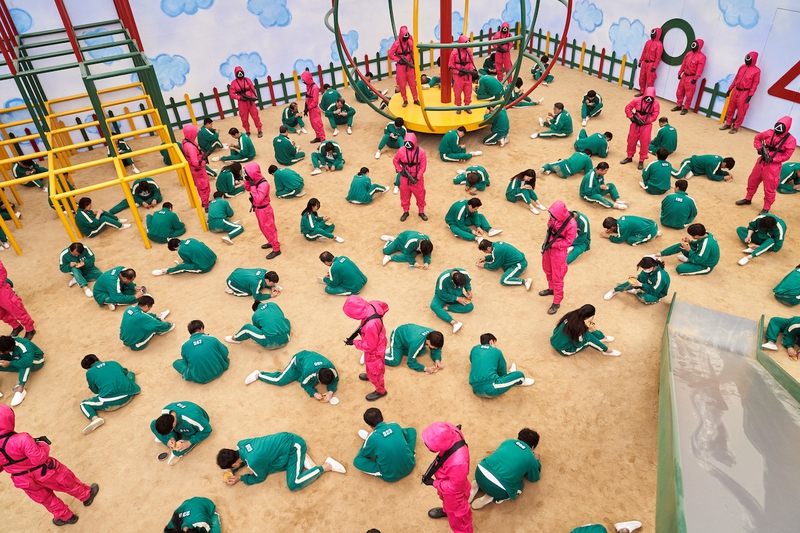 In the series, Lee Jung-jae plays Seong Gi-hun, a degenerate gambler whose picture should appear in the dictionary under the word “feckless.” Just as loan sharks threaten to extract their money from his flesh if he doesn’t repay them within the next thirty days, a stranger approaches Gi-hun and offers a mysterious gift: a business card with a voice on the other end of the line promising him large sums of money for playing children’s games. He agrees as much out of desperation as curiosity, but after being drugged and transported to a remote facility where he joins 455 other individuals similarly hoping to earn some cash, Gi-hun is both more skeptical and more hopeful than ever. He and his fellow competitors quickly discover the stakes for losing during the first contest when, during a game of “Red Light, Green Light,” individuals who violate the rules are mercilessly assassinated by gunfire from the facility’s masked enforcers.

More than half of the players are killed in that first game, and the remaining survivors beg to leave. But even if the games are undeniably sadistic, they’re controlled by a rigid series of rules set by The Front Man (Lee Byung-hun), who agrees to cancel the contest if a majority agrees to do so. The show’s second big surprise comes when the players vote to go home, and The Front Man honors his pledge, returning them to their lives — and their debts. Following their decision to participate in what amounts to the get-rich-quick scheme of the games, the collective decision to withdraw (in the second episode!) narrows the show’s incisive gaze to look at the sociopolitical and economic machinery of these countries that control poor people and the illusion that they have any control over their upward mobility, much less their very lives. Ultimately, the fact that virtually all of the players later elect to return to try to win the contest speaks to the unimaginable choices poor people face — in this case, abject poverty or potential death in order to escape it. 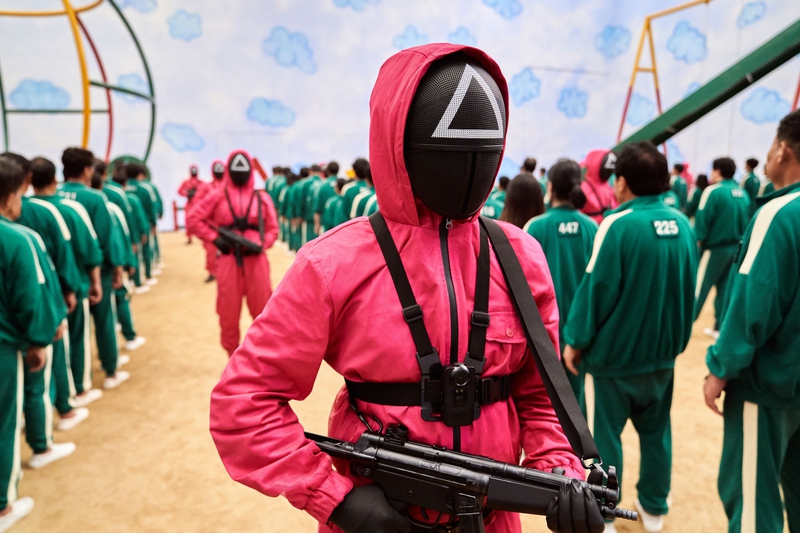 Conversely, the character types embodied by Gi-hun and his fellow competitors speak to a number of ambitions, impulses, or appetites that more often drive individuals to overextend themselves than produce lasting financial success. Jung-jae’s performance as Gi-hun is extraordinary for the way that he elicits our sympathy almost at the same time as our aggravation; he is addicted to gambling, but whether it’s part of or parallel with that affliction, he seems consistently incapable of comprehending the consequences of his situation. His opposite is Cho Sang-woo (Park Hae-soo), a former employee at a securities company from Gi-hun’s hometown who stole money from his clients, and is constantly calculating the angles to play — and scruples to shed — in order to win. Gi-hun’s idolization of his counterpart’s pedigree as a great student and successful businessman casts an unflattering light on his greed, corruption, and eventually his determination to win at all costs.

Kang Sae-byeok (Jung Ho-yeon) is a young woman trying to rescue her mother from North Korea and reunite her family; she has built a shell of cold detachment around her, but she is the victim of a political system where grifters and the bureaucratic process itself can bleed people dry before they’ve achieved their aims. She becomes the third most important character in the show, but there’s also Jang Deok-su (Heo Sung-tae), a criminal whose greed drove him to steal big and bigger until someone finally noticed, and Oh Il-nam, a senior citizen playing the game because he has a brain tumor and is preparing to die. These are all people swallowed by a system they can’t hope to control, or in some cases, who indulged their success until that system decided that they were overextended; but it’s their collective desperation that drives them to compete, and makes us understand why with such sympathy.

And so, in contrast to the “kill or be killed” rules of Battle Royale, or the calculated life lessons imposed by Saw traps, the elevated children’s games played in Squid Game function as different types of metaphors both to reveal character and explore different economic principles. Simultaneously, the show pulls back the curtain to expose the operators of the game as society’s wealthiest as they prey upon the poor with detached entitlement, and in a subplot involving a doctor harvesting organs from deceased players, retaliate against individuals who violate their broader rules about how they believe it should operate. 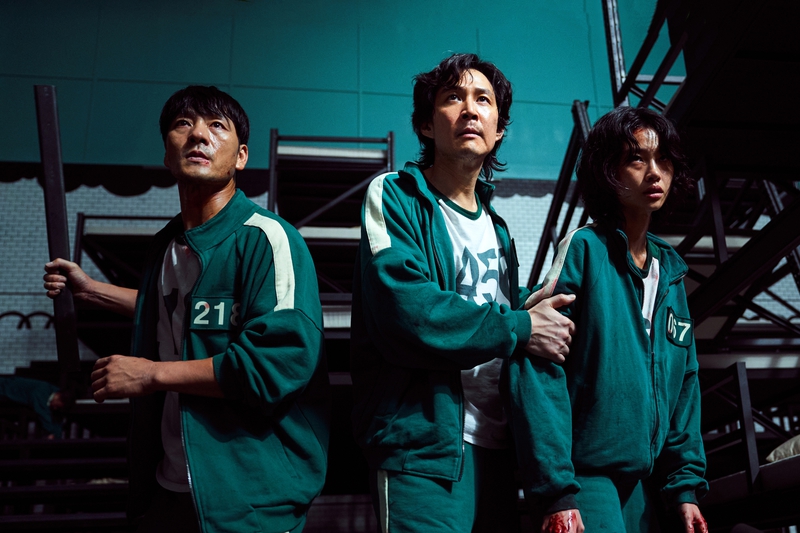 In one game, players are asked to choose a path without knowing which one will be the most difficult, forcing Gi-hun to improvise a solution that saves his life and several others. In another, players are paired to compete in a marble game, pitting comrades against one another and forcing them to choose how to compete. And then, in the penultimate contest, players effectively exploit their competitors’ sacrifice in order to succeed. What’s interesting is how the victories compel the survivors to move forward, to increasingly make choices that are cutthroat or even murderous, and eventually to rationalize the losses of others as worthwhile to shuffle them towards victory.

Many countries — but especially America — have a disgraceful history of pitting the poorest people in society against one another while the rich get richer — and in too many cases, get richer because they’re pitted against one another. So the fact that so many of the VIPs watching the contest are American feels like no coincidence. But from the top to the bottom of the hierarchy within this mysterious organization, each level repeatedly proves to be representative of class disparities that have existed across cultures for centuries, and the more conspicuous current-day economic evils of an ultra-rich class that views the poor as under its control, treating them as playthings.

For me, the only false notes in the series come in the scenes featuring the VIPs; the English-speaking characters talk like people whose statements have been translated from another language, and feels like a strong argument (especially in Hollywood, but reflected in its absence here) for the inclusion of creatives from cultures being represented on screen to create authenticity. But as the show winds towards its satisfying, surprising, seemingly inevitable ending, we eventually learn some important and less obvious truths about economic systems that are so wildly disproportionate: a complete financial rebirthing — to be given limitless wealth virtually overnight — can be as paralyzing and destructive as total poverty, and still doesn’t solve all problems. But it does encourage people to disconnect from their fellow humans.

With more than 111 million viewers, a follow-up series seems inevitable, although Hwang recently admitted that he did not develop a storyline for what happens after Season 1. After achieving considerable success with his earlier work in South Korea, it will be interesting to see if he gets paralyzed or inspired by its explosive international popularity. But the ultimate takeaway in a contest like this — in a story like this — is that choice is a luxury for some, and an illusion for others. One supposes that which group you fall into may determine if Squid Game is a white-knuckle adventure, or a harrowing cautionary tale; but the one thing that almost all of its viewers share in common is that there’s always someone bigger, more wealthy, or more powerful than they are locking them into their fate, whether or not they know it.

Squid Game is now streaming on Netflix, click below to watch: