QUESTING FOR CAMPBELL: The Unlikely Story of an EVIL DEAD Fan Film

In 2001 Bruce Campbell visited a Michigan high school and became part of the ultimate fan film. 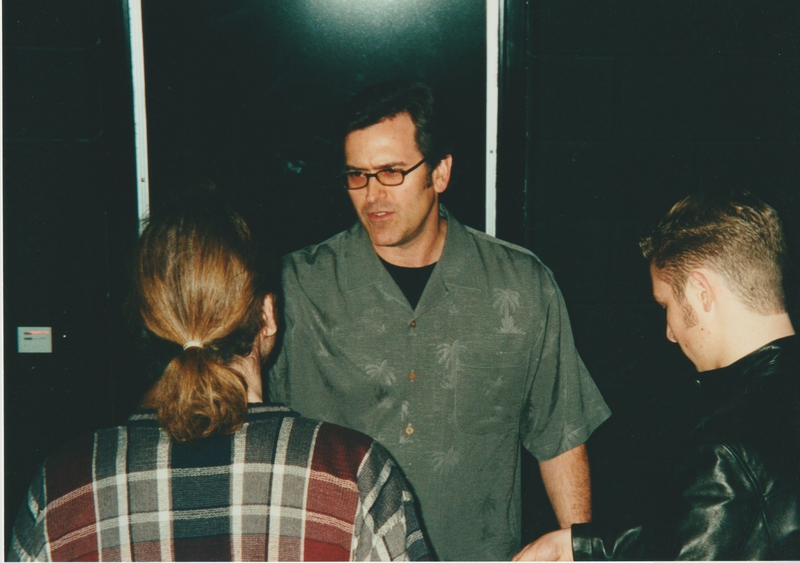 Behind the scenes of QUESTING FOR CAMPBELL

After experiencing the grueling terror of The Evil Dead at the tender age of 9, Michigan native Brian Kilby became known for his love of Sam Raimi's horror franchise. In 2001, Kilby's video production teacher at Rochester High School, Christopher Guyor, advised him to channel his enthusiasm into a short film for an upcoming film festival at nearby Ferris State University.

Written by Guyor, Questing for Campbell chronicles a group of friends' attempt to meet the Evil Dead series' beloved star, Bruce Campbell. The concept intrigued Kilby, but there was one glaring problem: he had no access to Campbell.

Guyor took it upon himself to reach out to the cult actor, then based in Michigan. "I wrote the script over winter break," explains Guyor. "And then contacted Bruce Campbell's agent, asking if we could get ten minutes with him. I knew this was the most likely way to get a response. I was surprised when I came home one day to a message from Bruce himself on my machine."

Three weeks later, Kilby was directing Campbell on set. "The whole thing was quite surreal. Here I am, this 17-year-old wanna-be filmmaker, and this guy was like Robert De Niro to me. I was positive he wasn't going to be in it. I felt like I won the lottery." 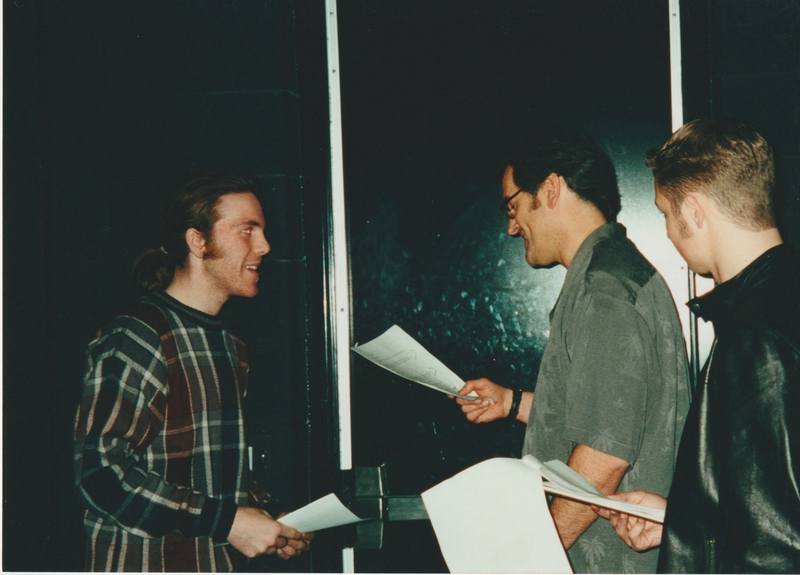 Not only did Campbell oblige to help the budding filmmakers, he proposed that he spend part of the day at the school and talk to any interested students before shooting the scene. "It became a huge event," recalls Guyor. "We had to issue special tickets, and we had some kids trying to get in with counterfeit tickets."

In addition to directing under Guyor's guidance, Kilby stars in Questing for Campbell as a fictionalized version of himself alongside four friends — Jeff Kravchenko, Richard Armaly, John Puleo, and Joe Farrell — who also served as the production's crew whenever they weren't on camera. 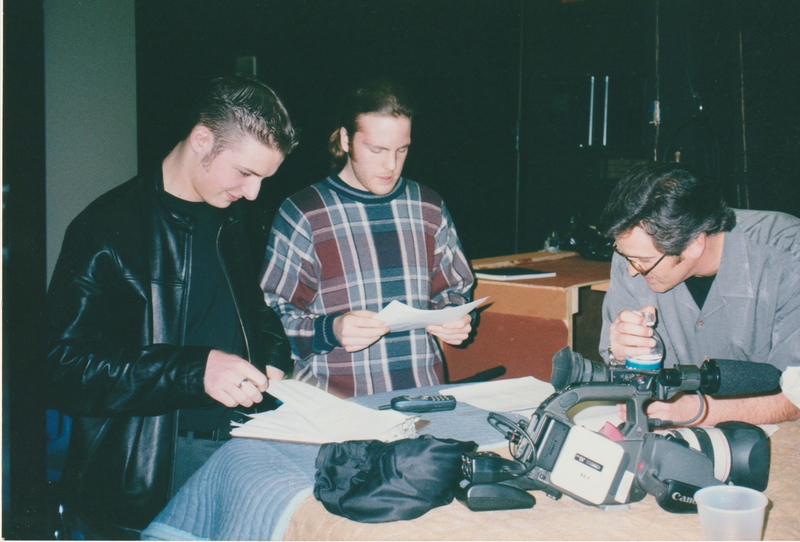 Playing himself proved to be more challenging than Kilby initially anticipated. "When I started watching the footage after the first day, I thought, 'Oh, my God. I'm actually trying to act like me.' When I realized that, it turned out to be pretty difficult." When it came time to shoot the scene he shares with Campbell, however, Kilby didn't have to do much acting. "That was all real. I was absolutely terrified."

"The best part was watching [Campbell] with the students. They were eating it up," Guyor reminisces. "But after being starstruck when they first met him, when we started filming and he started treating them as equals, they responded in kind, and the creative process was fascinating to watch." 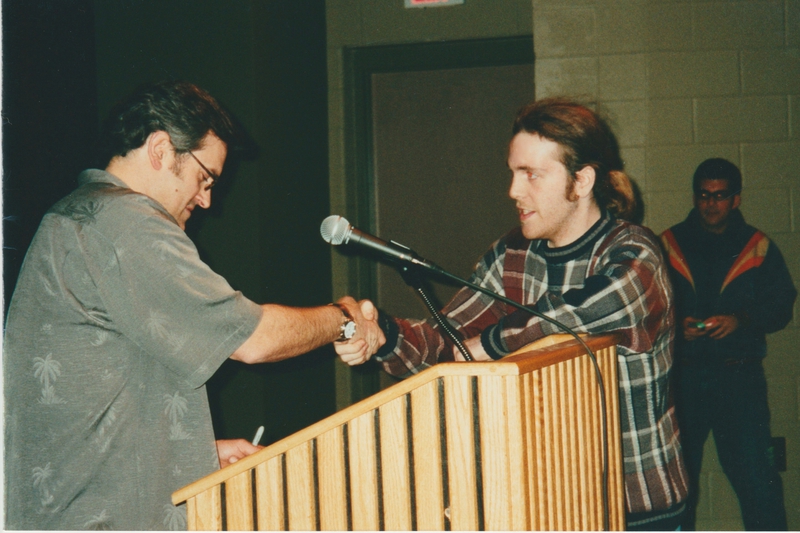 The 17-minute film culminates with Kilby succeeding in his mission to meet his idol. In addition to the on-screen advice regarding rejection and crying on cue, Campbell imparted sage wisdom about the film industry that has stuck with Kilby.

"He made it very clear not to be too sensitive," notes Kilby. "Take everything as best as you can with a grain of salt and just move on. He told me to try my best not to be broken by someone's harsh words." Campbell also reinforced that a director should communicate his vision to the crew and then trust them to do their jobs rather than micromanage. "Even me, on Questing for Campbell, I tried to do everything. That's why certain things came out the way that they did."

Beyond elevating the production with his involvement, Campbell suggested they shoot his scene in a single take to make it more interesting. He spent over two hours with Kilby and Justin Morck, a fellow student who plays Campbell's agent, rehearsing the shot. The result plays like an amateur version of an Aaron Sorkin walk-and-talk scene, poetically concluding with a comedic button from Campbell ("Fat chance, loser.") before the door closes behind him as he exits.

"That day truly became the day that inspired me to work in film," reflects Morck. "[Campbell] was a force of nature; an energy that intimidated me a bit. I thought he was showing up just to read some lines and then leave, but from the moment he entered, he became this teacher, giving us a crash-course masterclass in acting and directing for the camera." 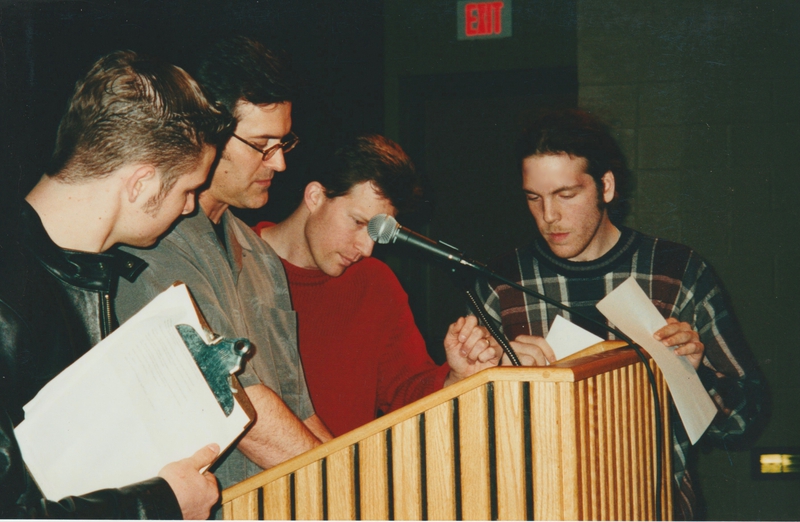 Like many, Kilby found himself with newfound free time when the COVID-19 pandemic hit. He decided to dust off his old projects and post them on YouTube in the hopes of providing a reprieve from the bleak news cycle. "I just wanted to try to add a few things that people could watch that had nothing to do with what was going on in the world."

Since it was his first time directing, Kilby was apprehensive about sharing Questing for Campbell publicly. "I had no idea how to use that camera, so I was always a little embarrassed by the movie, but I thought it would help people take their mind off things." He uploaded the video in April of 2020.

Kilby remained in touch with Campbell over the years, often filming his public appearances in the area. In 2009, Kilby showcased his growth as a director with a sequel, Questing for Campbell 2, while attending Michigan's Motion Picture Institute. Campbell — at that time a co-star on Burn Notice — politely declined to reprise his role, but he granted Kilby permission to utilize footage from a panel he had shot a few years prior. 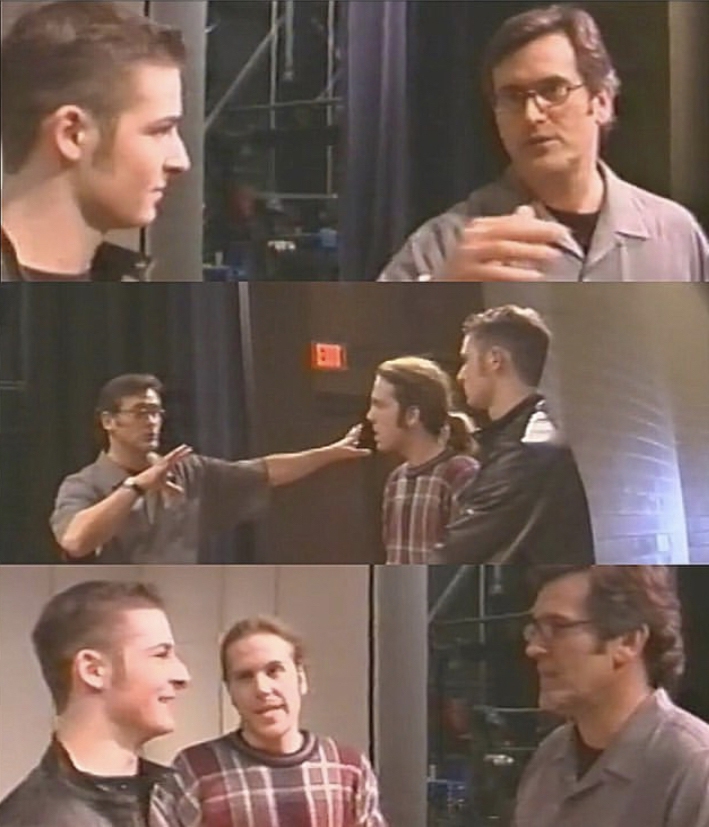 Kilby hopes to one day reconnect with Campbell to make a third Questing for Campbell short echoing the Evil Dead trilogy that inspired it. "And I do have an idea for it!" he exclaims.

While he's quick to admit that another film is unlikely to come to fruition as it did 20 years ago, it wouldn't be the first time he has beaten the odds. In the interim, Kilby continues to pursue his passion for filmmaking. His latest effort, a comedic send-up to Italian horror titled Guardia de Malé 2, is streaming for free on YouTube.

Questing for Campbell did not win the film festival, but Kilby's journey provided a greater sense of purpose than any award ever could. "It's in the top five most memorable moments of my life." He pauses, then adds, "I don't have children right now, so that's why I'm allowed to say that."