Five years after the series went off the air, it's still inducting new genre fans. 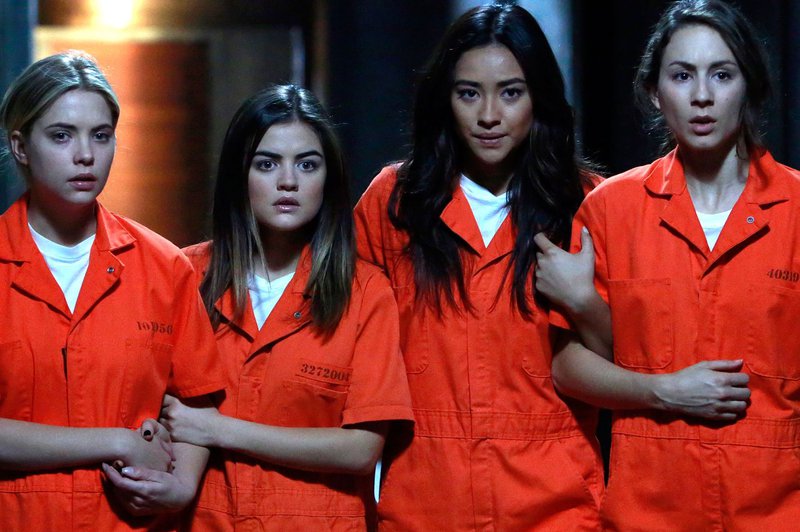 During my freshmen and sophomore years of high school, every Tuesday night would end with a specific text from two of my best friends: “So who do you think is A?” The hit ABC Family show Pretty Little Liars (2010-2017) had a vice grip on our weekly TV watching habits, and we were hooked on uncovering the identity of who was tormenting the four main characters. It was the perfect thriller-mystery for me at the time, with characters that felt easy to invest in and plot twists at every corner. However, one particular thing stood out to me when I talked to my two friends about it: they consistently discussed how spooked each night’s episode had made them, and how they even had trouble sleeping at night after watching.

Despite the lengths that A would go to in making the lives of the liars a living hell, Pretty Little Liars never felt necessarily scary to me, and I couldn’t quite connect it to the horror genre in the way that my friends were. With the fifth anniversary of the series finale coming up this week, I’ve had the opportunity to rewatch the series and discuss it with those two friends retrospectively. I realize now how Pretty Little Liars tapped into very specific fears that plagued teenagers – particularly teenage girls – in the way it portrayed the dangers of technology and social media. I’ve since changed my original stance on it and feel that it deserves more credit as one of the seminal avenues of gateway horror for the teenagers that it was geared toward, instead of being dismissed as silly and melodramatic.

The series begins with four former friends (Troian Bellisario as Spencer, Ashley Benson as Hanna, Lucy Hale as Aria and Shay Mitchell as Emily) who reunite when their missing former ringleader Alison (Sasha Pieterse) is declared dead, and an anonymous bully who seems to know all begins tormenting them in increasingly creative and elaborate ways.

When I questioned my friend Megan as to why she thinks of Pretty Little Liars as horror, she referenced back to fears that she had when she watched the show as it aired. “As a teenage girl, I felt like a lot of the things the girls went through could have happened to me,” she said, recalling plot points like when A secretly took pictures of Aria, turned the girls against each other and planted items in their lockers to blackmail them. She mentioned how any of the closing scenes where A was in one of the liars’ houses made her have trouble sleeping at night.

Most teenagers may not experience some of the more outlandish aspects of the show, like having cars crash into their houses or having to kill somebody in self-defense, but there are many compelling instances that most teenagers can directly relate to. For example, as a closeted gay teenager at the time, I felt the anxiety that Emily experienced when A stole the photo of her kissing her new secret girlfriend Maya (Bianca Lawson), and threatened to expose it online. It spoke directly to the fear that I had at the time of someone leveraging my hidden sexuality over my head to blackmail me.

Pretty Little Liars capitalized on the fear of feeling constantly exposed thanks to the rising trend of social media. If the girls made a mistake, whether it was a little white lie or a brief error in judgment, A was always there to record it and potentially leak it to the rest of the world. It’s a concept that was, and still is, prevalent since the 2010s. Teenagers aren’t given the grace to make small mistakes without their entire social networks potentially knowing about it in the age of Internet culture. When they do speak up about any harassment or danger that they face, they are often gaslighted or completely dismissed in the same way that the liars are when they try to speak up about A.

Interestingly, when I asked my friends which of the main characters they related to most at the time, they both identified with Type-A overachiever Spencer. “I related to the feeling of always needing to look like you had your life together and that you were on your best behavior,” my friend Kayla said. Megan echoed similar sentiments, stating that she identified with the need to be a perfectionist. Spencer actually succumbs to the pressure of being “perfect” multiple times throughout the show, eventually causing her to turn to amphetamines to try and keep up with everything being thrown at her while hiding it from the rest of the group. Spencer reflects the culture of social media that perpetuates the pressure to put up a façade of perfection while hiding any indication of struggle or insecurity.

This culminates in the first (and arguably best) A reveal as none other than Hanna’s best friend, Mona Vanderwaal (Janel Parrish), who suffered a meltdown that stemmed from the intense bullying she received throughout her childhood. After having no friends for so long, she’d lashed out against the girls, thinking that Hanna was neglecting their friendship in favor of the others. Though her means weren’t justified, her motives were actually tangible to the teenage experience: she just wanted to have the friends and attention that she had lacked for so long.

The writing in Pretty Little Liars was not always so stellar. It dips low into extremely problematic elements, with two instances in particular: its incredibly poor treatment of trans character Charlotte (Vanessa Ray), and the entire ethical foundation of Aria's affair with her English teacher Ezra (Ian Harding), which the show presents as aspirational. Pretty Little Liars and its writers, especially showrunner I. Marlene King, deserve and receive pointed criticism in those regards. With the passing of only five years since it ended, neither plotline has aged even reasonably well.

But in the context of defining shows in the horror genre marketed towards teenage girls, Pretty Little Liars has more than earned its seat at the table. It deserves more than to just be looked upon as a show with cliché tropes or over-the-top plot twists. It will remain as one of the most effective television shows at representing what it was like to be a teenager when the Internet became all-encompassing, and the fear that surrounded the treacherous unknown that came with it.