Featuring props, costumes, and corpses from the show in the (rotting) flesh. 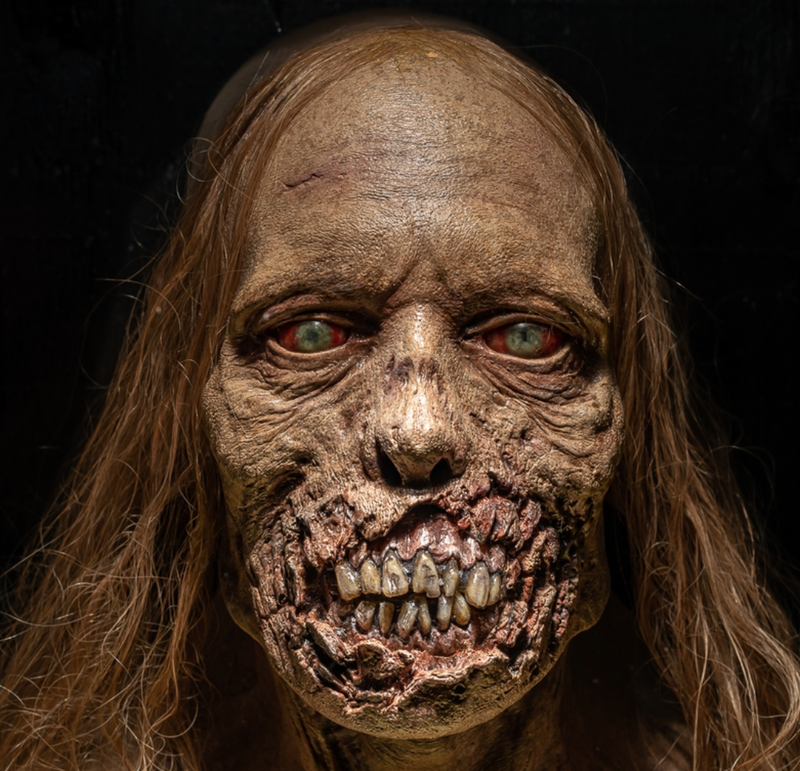 Zombies have overtaken the Museum of Moving Image with the latest limited-time exhibit, "Living with The Walking Dead." Curated by Barbara Miller (Deputy Director for Curatorial Affairs at the MOMI) and in collaboration with AMC, the exhibit features a plethora of props, costumes, and artwork from the long-running horror series, which premiered in 2011. For those somehow unfamiliar with the pop culture staple, The Walking Dead follows a group of survivors in the midst of a deadly zombie apocalypse as they realize the living may be more of a threat than the re-animated dead.

With the flagship show in its final, eleventh season, the Museum of Moving Image is celebrating the show's undead legacy alongside the evolution of the zombie on film. In addition to the main exhibit, MOMI is also hosting a curated screening series featuring zombie films throughout history.

Through July 30th, the screening series focuses on "Films of the Dead: Romero and Co." (sponsored by Shudder). This series takes Romero's classic zombie films and pairs them with contemporary films that they inspired. From August 19th to September 11th, the "White Zombies: Nightmares of Empire" screening series showcases films "that chart the zombie's propensity to mirror the horrors of imperialism and a host of other anxieties, from miscegenation to war."

The "Living with The Walking Dead" Exhibit will be on display all the way until January 1st, 2023. I took a trip to Queens, New York to get a first-hand look at the world of The Walking Dead. 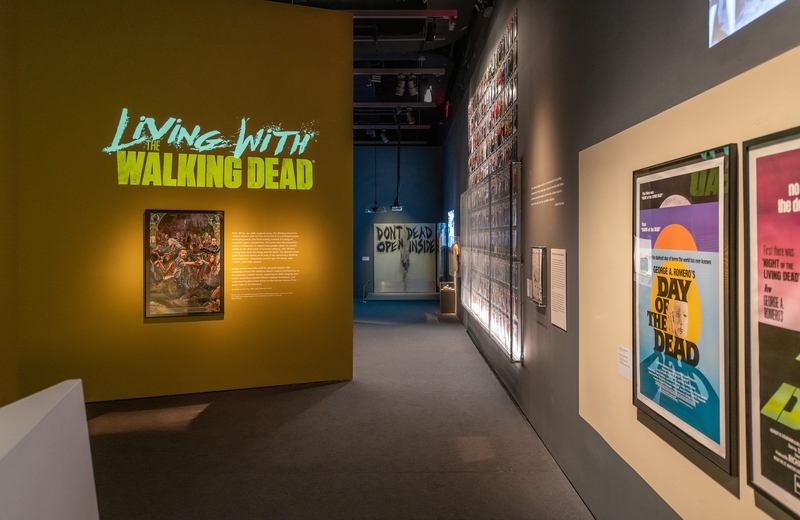 "It's really about using the success, or significance of a series or a film or a director to kind of shed light on something larger than itself. Obviously, the property itself needs to be of merit and then kind of provide that prism to look at a bigger picture. We felt like Walking Dead was an ideal example of that," says curator Barbara Miller.

"These sort of zombie apocalypse tropes have been floating around firmly together since George Romero in the late 1960s. What Walking Dead does is take those tropes and transplant them to the broad canvas of television where you can see them play out, much as you see in Robert Kirkman's comics, what this long story of survival in the zombie apocalypse looks like."

*SPOILERS FOR ALL SEASONS OF THE WALKING DEAD BELOW*

One of the first items guests will encounter once stepping into the exhibit is the iconic "Don't Open Dead Inside" doors from the series' pilot episode. Staying on theme, right beside the infamous doors hangs Rick Grimes' dirtied hospital gown worn by none other than Andrew Lincoln. Television screens nearby display the scenes featuring these props, only adding to the wonderful atmosphere. Other accessories in this area include Carl Grimes' (Chandler Riggs) paw-print shirt and Jenny Jones' (Keisha Tillis) pajamas she wore as a walker when Morgan Jones (Lennie James) spotted her early in the first season. 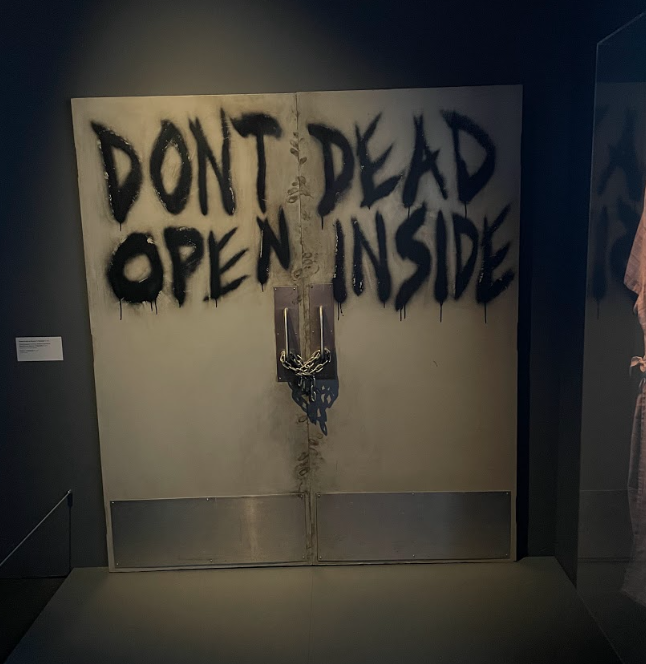 "We were like, excuse me can we borrow these doors? They were installed in the studio in Senoia, Georgia. They were like, 'yeah, okay,'" says Miller.

Barbara Miller describes this area's inspiration as, "How do we as humans sort of cope with The Walking Dead? So those rooms that we created were really about how to organize those big themes. Building "The World of the Living" kind of looks at how these characters build their lives, what does it mean to create these temporary settlements?" 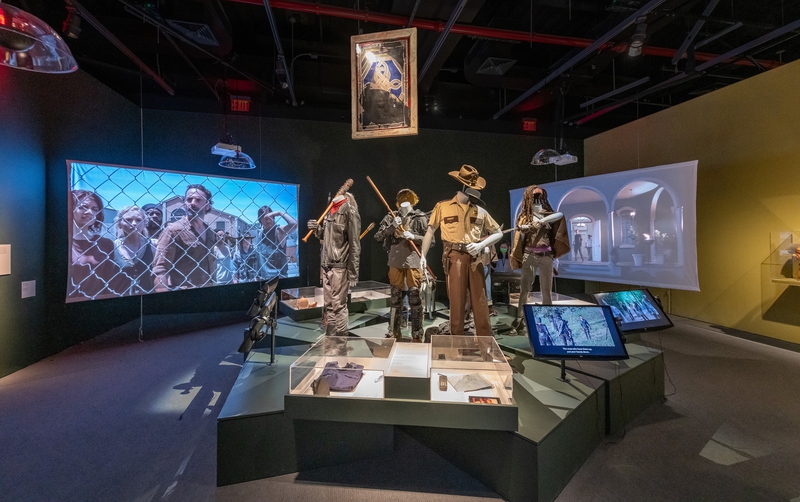 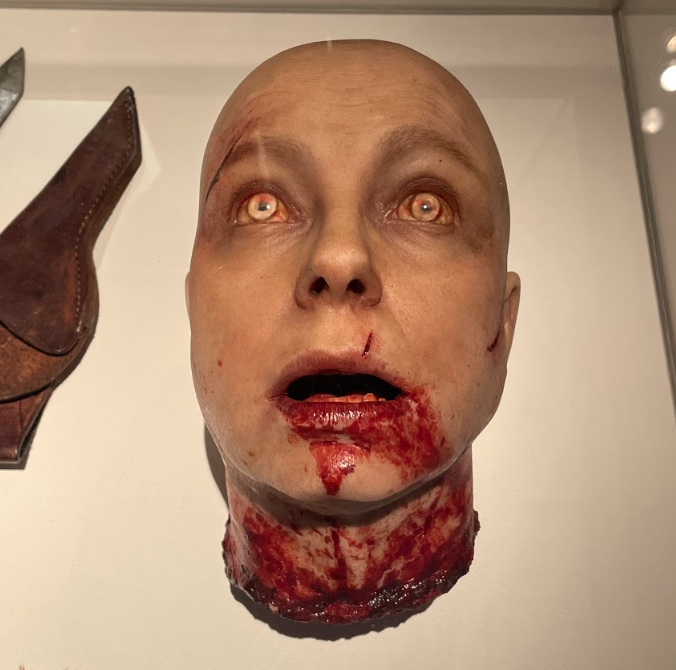 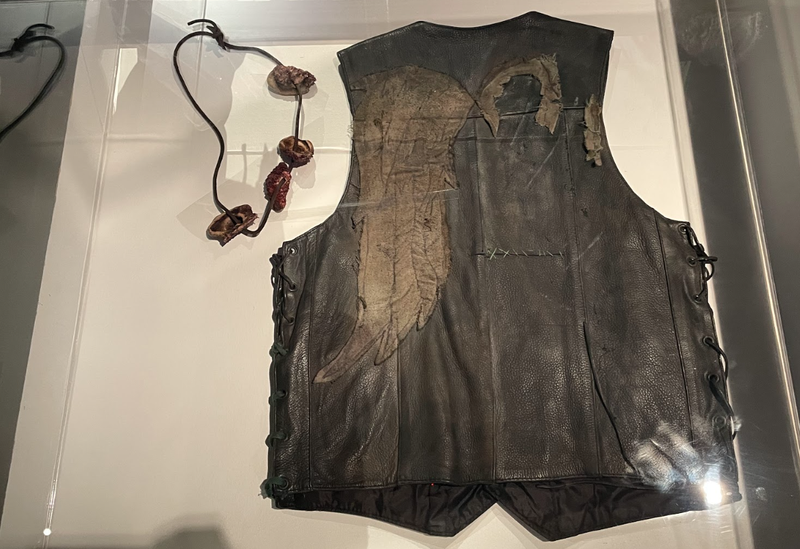 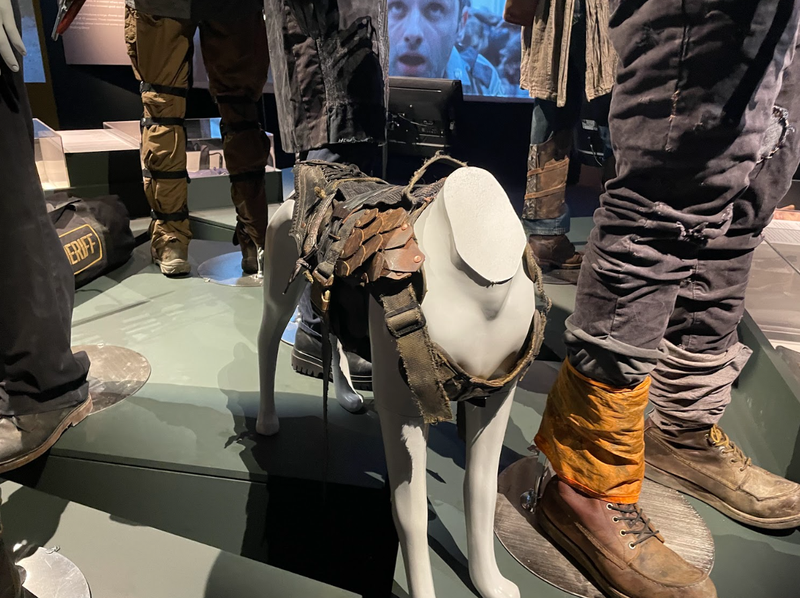 Before entering the next space in the exhibit, guests walk past two large display cases featuring the makeshift weaponry used throughout all seasons of the show to fend off hordes of the undead. Notable inclusions are Aaron's (Ross Marquand) mace-hand replacement, Daryl's crossbow, and Merle's (Michael Rooker) blade hand. 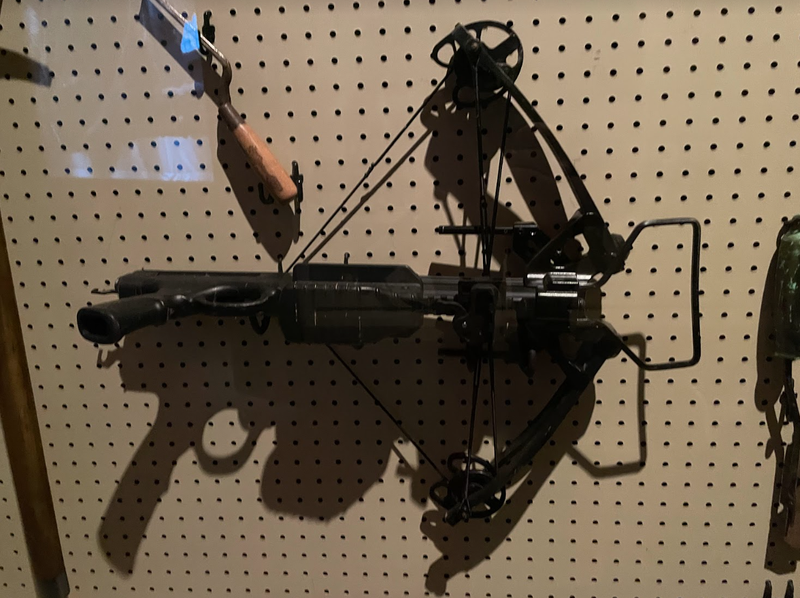 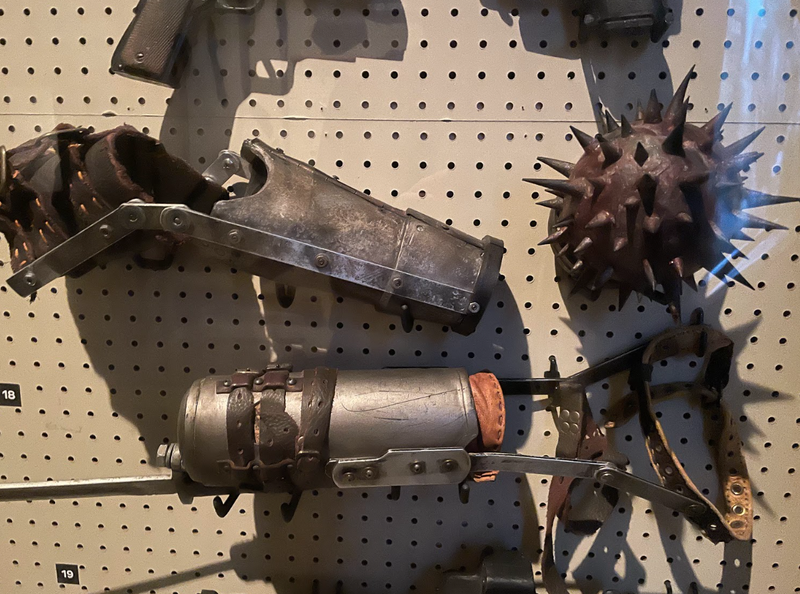 Things take a much darker turn as guests arrive in an area specifically focused on how the survivors of the series try to "live" with the undead entitled "Between the Living and the Dead."

Miller describes this section: "Why are other humans just as much of a threat as the undead? In a world where the undead are a fact of life, how do we forge relationships with them? Other than kind of put a bullet or a sword through their brains, how do we sort of accommodate living among them. Anything from Alpha and the Whisperers sort of embracing this cult of the dead to the Governor's weird attachment to his daughter."

Hardcore fans of the show are treated to an exclusive prop corpse of David Morrissey's The Governor, which was actually never included in the episode featuring his demise. Other highlights include several Whisperer masks on display, busts of Michonne's (Danai Gurira) walker "pets," Alpha's costume and mask, several guts-covered ponchos, and the mechanical heads of the victims from season 9's grisly spike display. 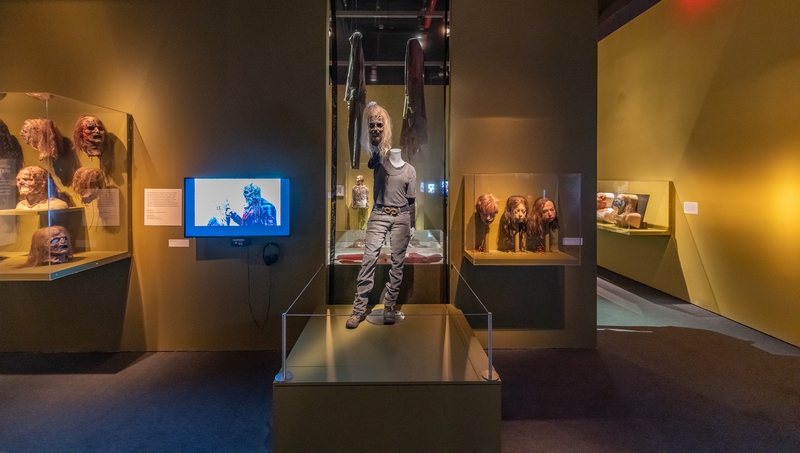 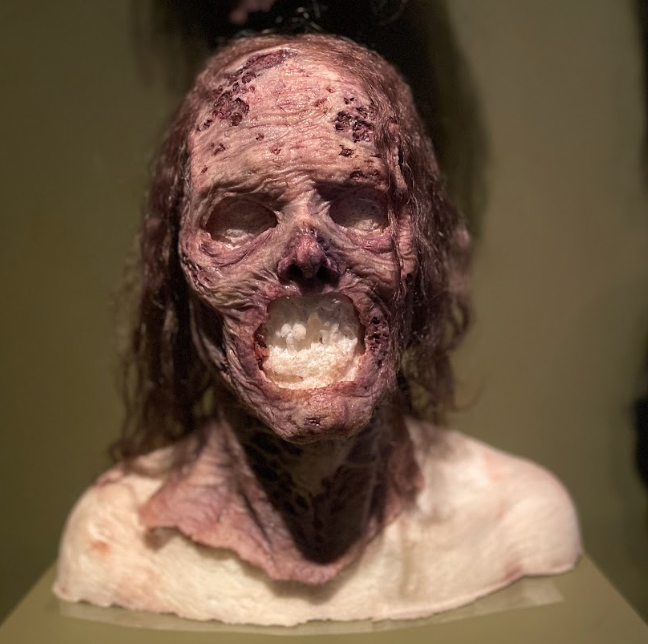 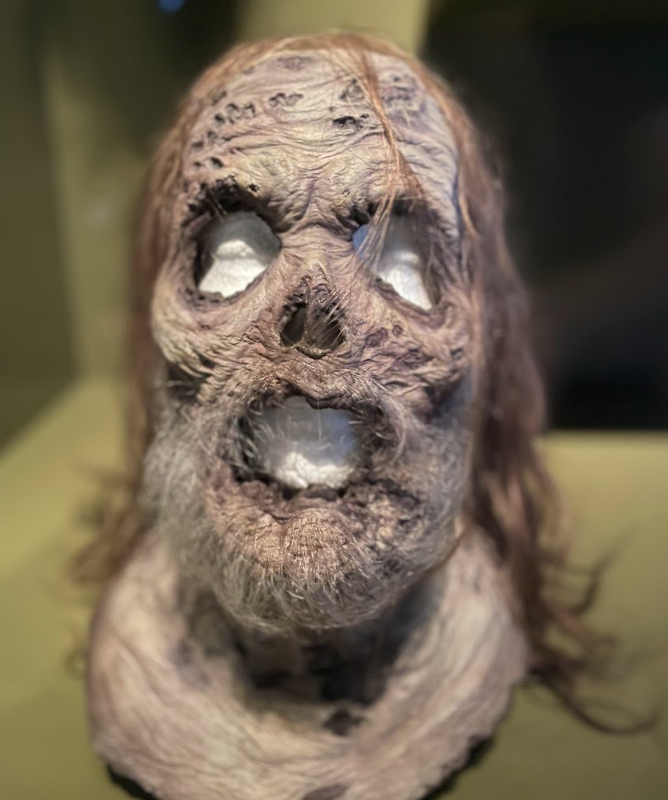 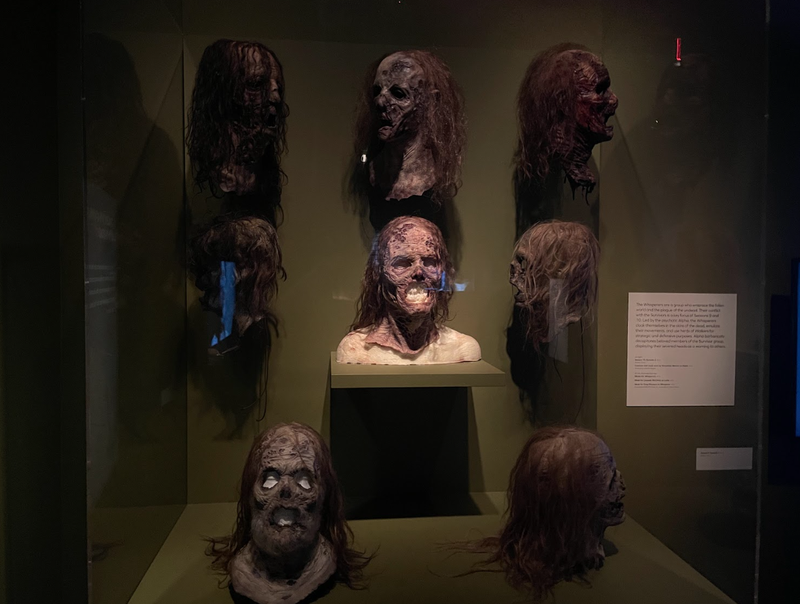 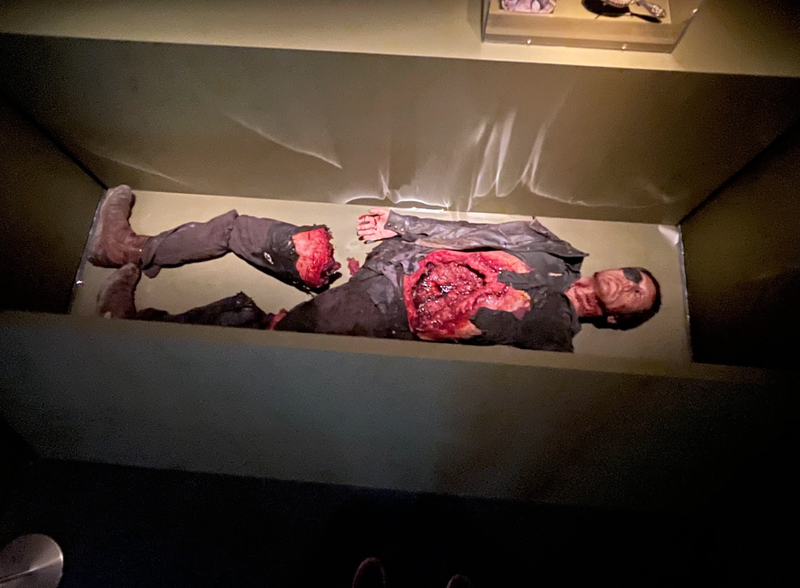 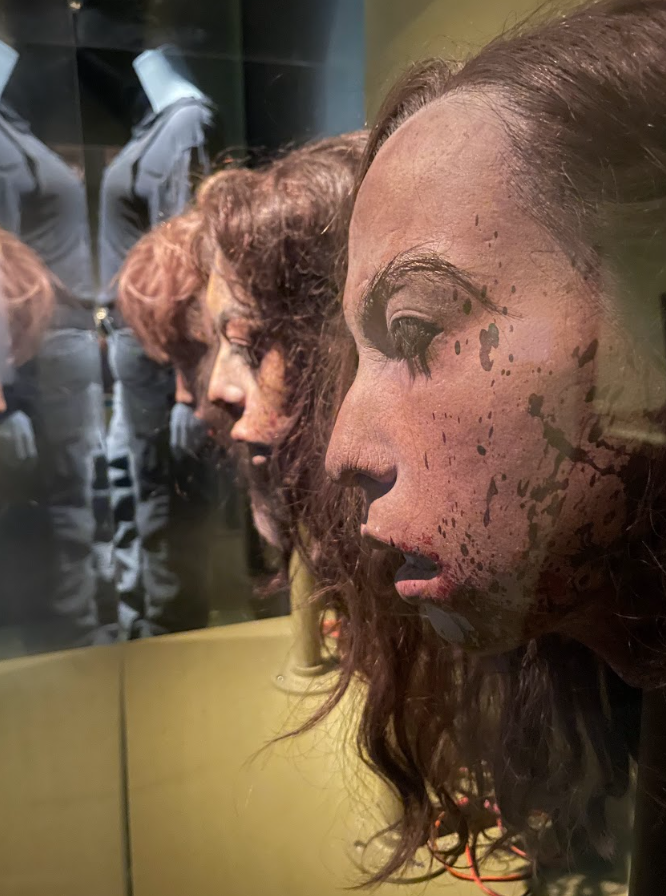 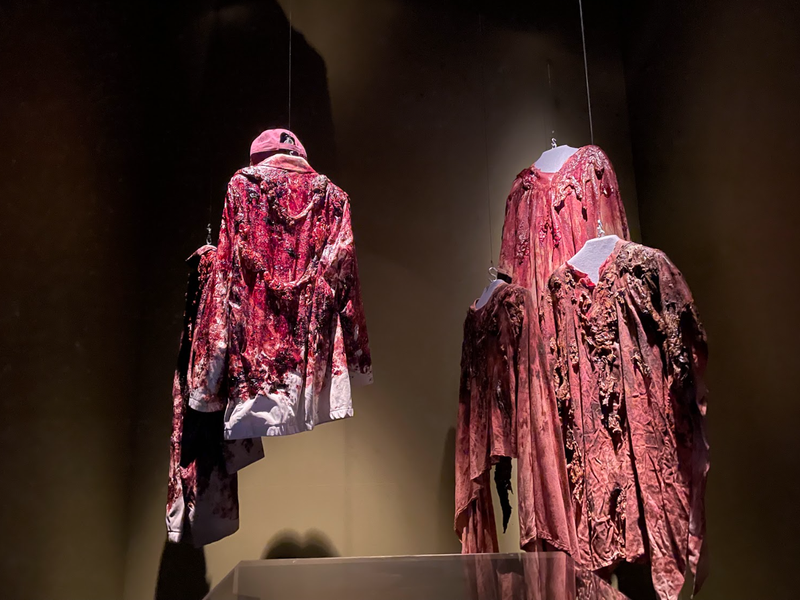 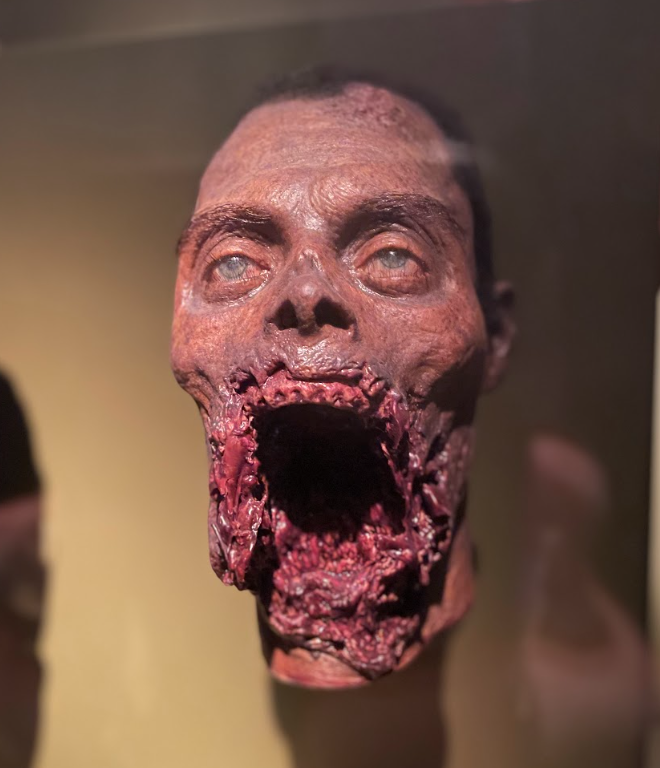 The next space focuses specifically on Greg Nicotero and Co.'s phenomenal special makeup effects work throughout the series. A glass case presents several makeup products and gross dentures used to create the many walkers. Further in the room sits a display featuring three prosthetic busts of some of the most shocking deaths on the show, including Noah (Tyler James Williams), Hershel (Scott Wilson), and T-Dog (IronE Singleton). One corner of the room is specifically dedicated to the most traumatizing and horrifying death in the entire series: Glenn Rhee's (Steven Yeun) mutilation at the hands of Negan in the season 7 premiere. Negan's blood-splattered bat dubbed "Lucille" sits proudly next to the prosthetic makeup piece of Glenn's disfigured head. A nearby monitor replays Glenn's terrifying demise on repeat in case you somehow forgot how he went out. 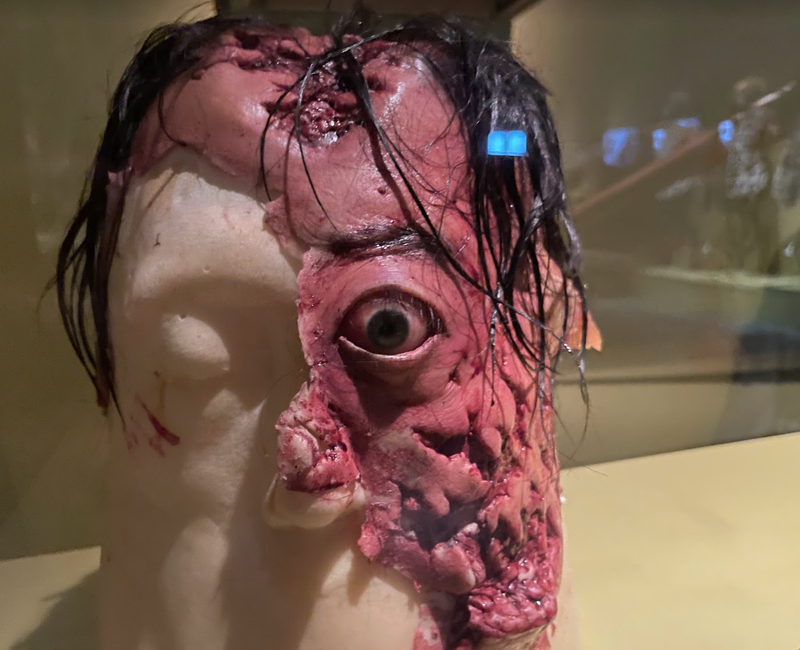 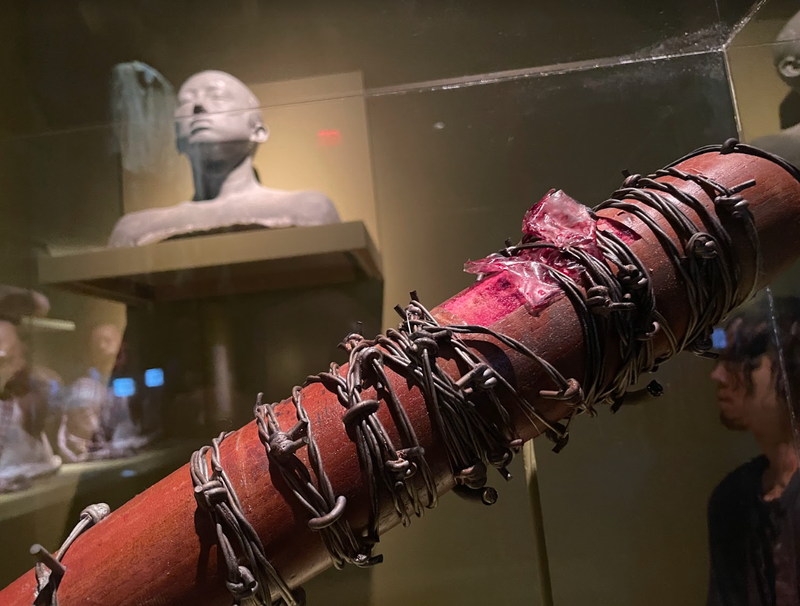 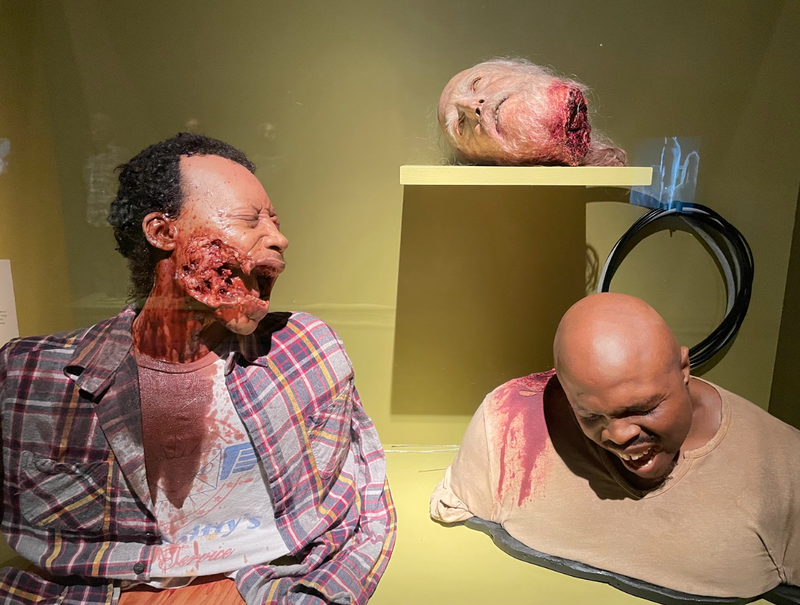 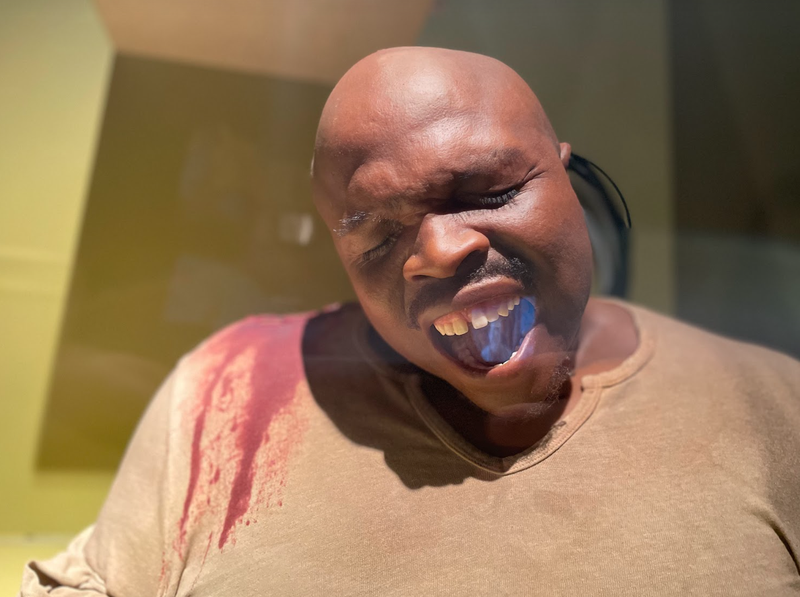 "There's something about the bust of T-Dog, which is actually a puppet that can be hand-operated. We had that piece in storage before we installed it, and I was too frightened to be in the room with it by myself. We have the Reagan McNeil doll from The Exorcist on view in our core exhibition. There's some pretty major things that I've been up close and personal to over the years. [The T-Dog bust] is absolutely uncanny. The makeup is just unbelievable, it just feels so magical to be so close to it. It kind of almost deepens the magic when you see how it's made." 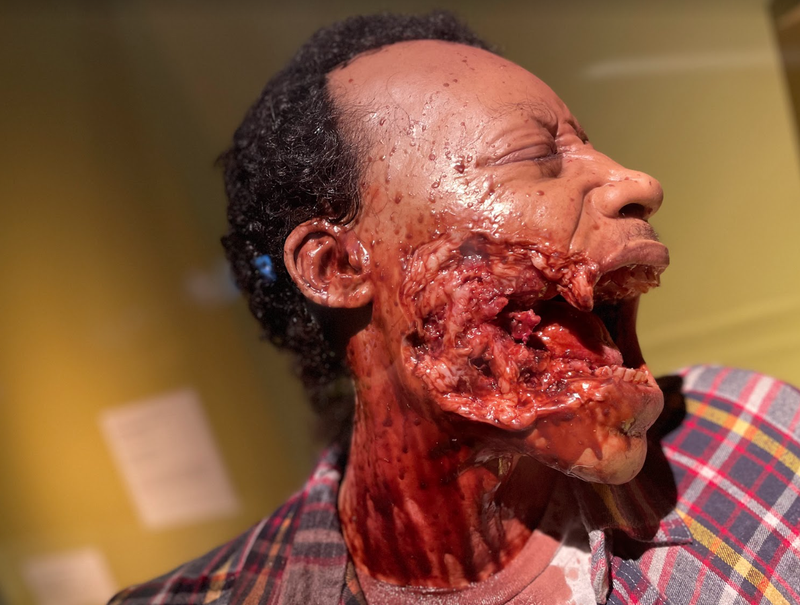 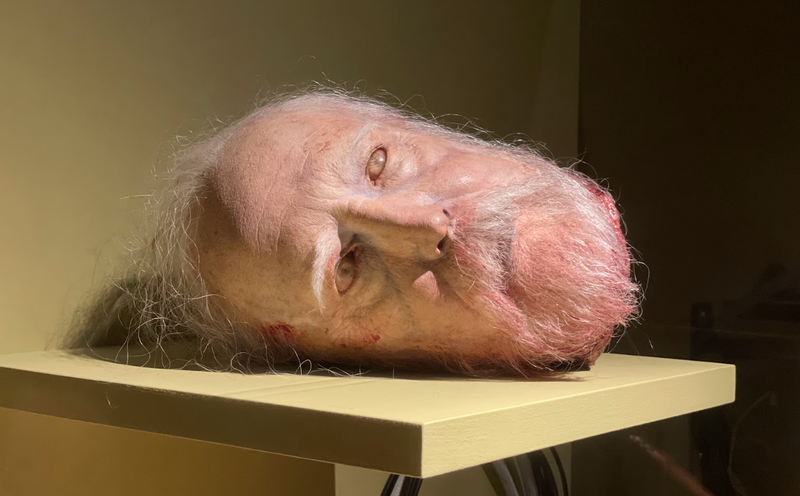 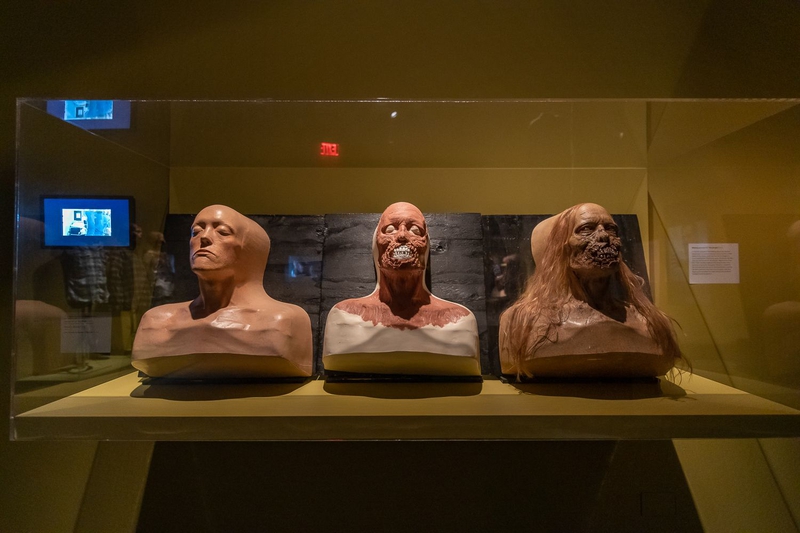 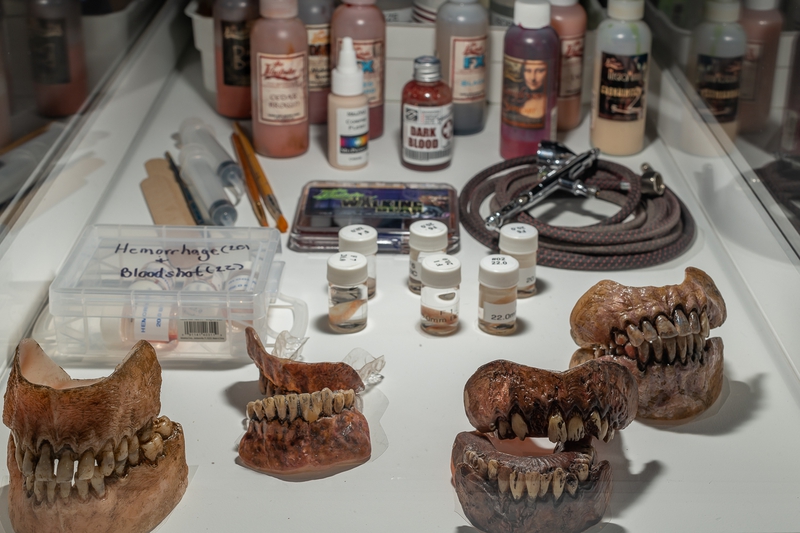 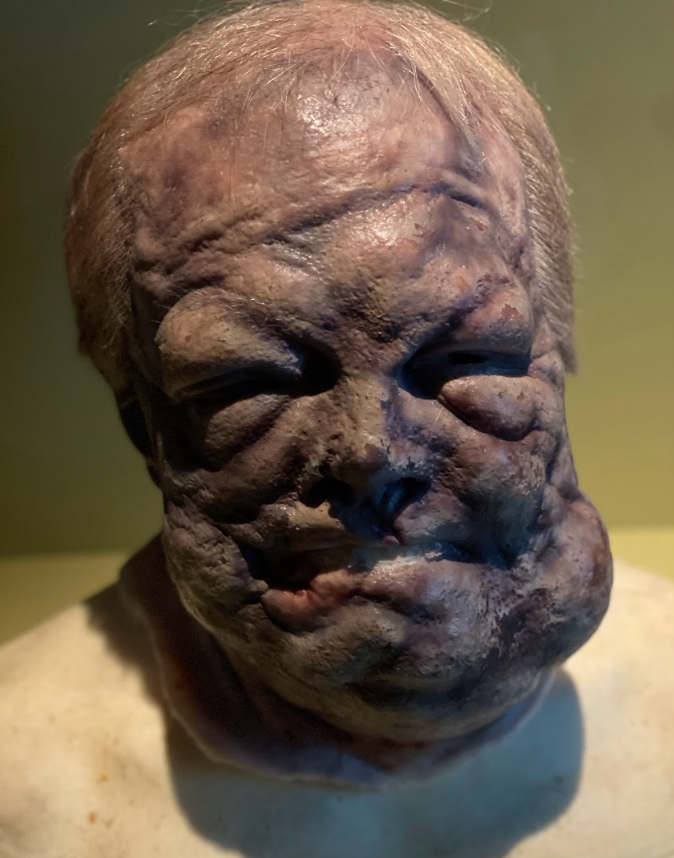 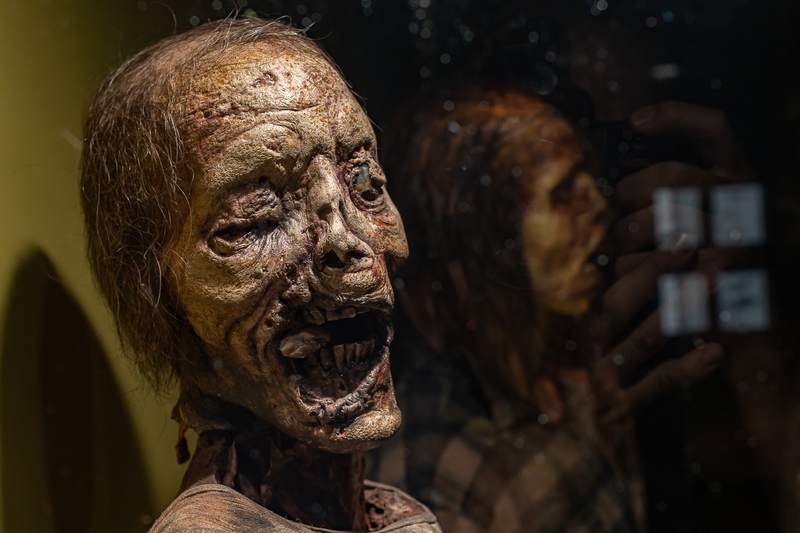 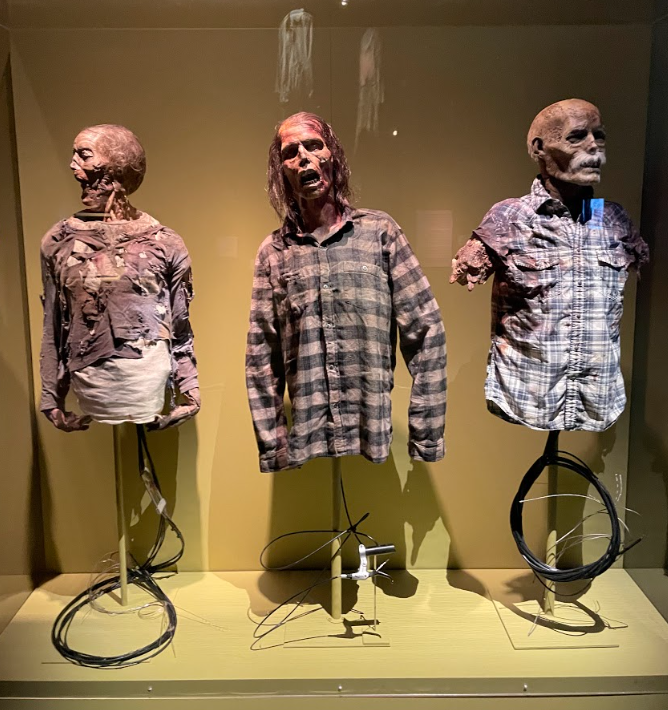 The final area of the exhibit is a tribute to the creativity and amazing fan response to the long-running series. Fan-made films run on monitors, action figures stand proudly on display, and a hallway spotlights the beautiful artwork from a plethora of talented fans of the show.

Miller describes this section as follows: "The final section was definitely really important to me. Looking at the phenomenon of The Walking Dead but really any sort of big tentpole, the fan engagement. It's really not just a fan club that writes in and someone sends them autographed pictures. There are really organic relationships that fans make among themselves, with the cast members at the various cons that go on throughout the year. We really wanted to capture that aspect of it. Fan feedback to things like Glenn being killed the way he was, those kinds of things and the response to the show was something that the network took seriously, and there was this dialogue. I think it deserves to be seen in the same frame and not as an afterthought. The fan engagement is within the same frame as the production of the show." 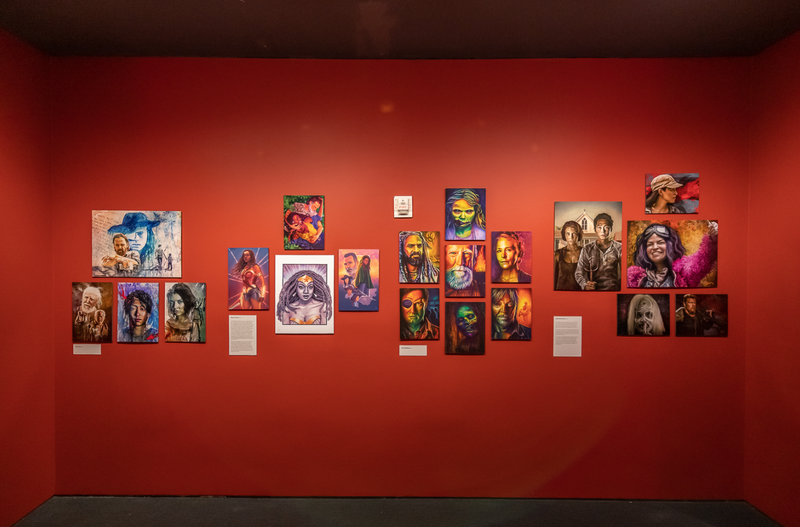 "Living with the Walking Dead" at the Museum of the Moving Images is full of ghoulish surprises and items that will make old and new fans of the series gush with delight. While this article features many of the awesome pieces on display, there is so much more to explore.

"It's for folks that are super fans, and it's for anyone that has an interest in these genres. We really hope to deliver on all of those levels for everybody," says Miller.