Mishna Wolff On Writing WEREWOLVES WITHIN 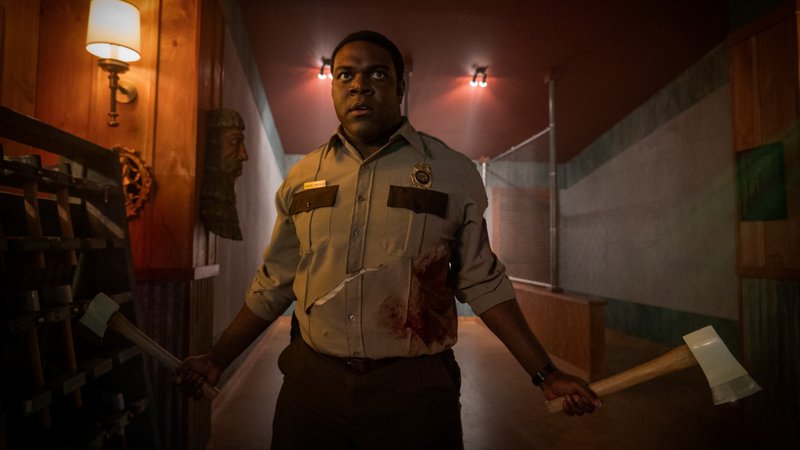 Star Sam Richardson in WEREWOLVES WITHIN (2021)

FANGORIA can’t give enough love to director Josh (Scare Me) Ruben’s Werewolves Within (the mag’s latest cover story and podcast darling) – and deservedly so. Winning rave reviews at its Tribeca Film Festival world premiere this spring, the entertaining horror-comedy romp (now in select theaters and hitting VOD July 2 from IFC) puts a fun spin on both an Agatha Christie murder mystery and traditional monster movie.

Werewolves Within – about a colorful group of New Englanders stranded in an inn with a blood-thirsty lycanthrope – marks the screenwriting debut of Mishna Wolff. Here she recounts what a scream come true her first film turned out to be.

How did this project first come to you?

I went to Ubisoft for a general meeting with Margaret Boykin, a great executive over there and a very creative person. She called my agent and said, ‘Does Mishna want to apply for this women’s fellowship thing we’re doing?’ It was the first year. So, there were no Ubisoft women in film yet, and they made me such an incredible offer. They opened up the vault to their IP. It was really unbelievable. And it was super collaborative. They’re just like, ‘Play some games. We’re interested in your point of view on things.’ I applied like everybody else. And now you don’t even need an agent to apply; now it’s open to everybody. So, if you’re a woman and you have a script or screenplay sitting in a drawer, feel free to apply to the Ubisoft Women’s Film & Television Fellowship, which is a paid fellowship. So, it was great. And I love video games. For me, it was like, ‘Oh, my God! I’m getting paid to play video games.’ My 12-year-old self just kept high-fiving me. I am doing something so totally fun.

I really sparked to this game, Werewolves Within, for a lot of reasons. I got on and watched a lot of gameplay and people were arguing like in the game. And there was so much conflict, and I loved that. It felt so human to walk into this game where people were just yelling at each other about who the werewolf was and who wasn’t and disagreeing. And there was just a lot of discord, and the thought of what that could be kept me up at night.

So, your last name had no part in your hiring?

I wasn’t exactly hired for Werewolves Within so I can’t say it did, but I do have a werewolf affinity because of my last name [laughs].

How faithful to the game was your screenplay?

Well, the game doesn’t really have a narrative to it necessarily. It’s a social-deduction game. But what I took from the game that I felt I really owed to it was the feel of being around the campfire, and the social-deduction element of it. And the thing about the game that lent itself so well to the movie is that people don’t make logical decisions about who the werewolf is. If they’re playing with friends, they bring their history with their friends, they bring their resentments, they bring their insecurities. And that’s what I felt would lend itself really well to a movie. It wasn’t the narrative of the game itself. It was the experience of playing a game with friends and being able to take your stuff with them out on them, because one of them is a werewolf. So, it’s that no-holds-barred thing.

You watched a ton of werewolf movies to prepare. Any favorites?

I can’t get enough Albert Finney. So Wolfen was one of the ones I really enjoyed revisiting so much. He’s so great in it too. Of course, I watched An American Werewolf in London. And the thing I liked about that movie so much is that it didn’t take itself too seriously. I definitely didn’t want to make a werewolf movie that takes itself super-seriously. It should be fun. If you’re gonna put the word ‘werewolf’ in the title of your movie, it should be a really good time.

Was 1974’s The Beast Must Die one of the werewolf films you screened? It has a similar premise.

It totally does. It didn’t come to my attention until after I had written the screenplay, and then it was like, ‘Oh yeah, this is that thing that I just did’ [laughs]. There are a lot of things like that; I saw Knives Out after I wrote this, and it’s all derivative of those sort of Agatha Christie, social-deduction games, Sherlock Holmes, all those really fun trapped-in-a-mansion-in-England-with-the-landed-Gentry movies.

While writing the script, did you have the identity of the werewolf figured out first and then work backward?

Yeah. I always start with the end in mind when I’m writing. I’m always thinking, ‘What would be a logical ending for this character?’ There were a lot of things I started with: I started with knowing I wanted that conflict between the characters. I wanted that scene around the fire that was central to the game, and I felt it should be central to the movie. It makes sense. I wanted a lead character who was afraid of conflict who hated conflict and was really averse to being confrontational, because this would be his worst nightmare. I wanted to test his limits of being nice in this world. And then the other thing I started with was who the werewolf was, for sure. We have to tell people there is a werewolf in this movie.

Did you play with different resolutions as you were writing?

What themes did you want to bring to the material?

I definitely wanted to explore divisions in communities and divisions around ideologies and the things that drive us apart, even when we most need to stick together to confront real, actual dangers. A lot of the themes in the movie are about community and what human beings owe each other. Finn is someone who wants to connect people, he wants to create community everywhere he goes. So, he embodies this theme in the movie of being a good neighbor, bonding together and that we’re stronger when we’re connected rather than divided. Of course, it doesn’t work out quite the way he hoped.

Was it tough balancing the comedy and horror?

That’s always a lot more alchemy than science, and there was definitely a lot of playing with the levels. And that continued after the script left my desk with Josh. And through the sound mix and through the edits… there’s great jokes on the cutting room floor to create tension. Because every time you make a joke or there’s a joke, it does cut the tension. Then some of the tense moments and the scares are funny, so it is all a mix and you’re always asking yourself, ‘Am I writing the movie that I want to watch?’ And at the end of the day, Josh directed the movie he wanted to watch. I wrote the movie I wanted to watch. The editor edited the movie he wanted to watch. So, it’s a lot of people who love movies and love creature features just having a great time.

What did Josh bring to the project?

He brought everything to the project, honestly. I was the conceiver. There’s no Beaverfield, there’s no Trish [Michaela Watkins], there are no Wolfsons [Cheyenne Jackson and Harvey Guillén]. These characters didn’t exist. So, there’s the huge conception period where it’s just like, ‘What if there’s this? And what if there’s that?’ And all of the mechanics of creating these dynamics between the characters and the ending and the plot. But what Josh does when he comes on is he takes it and it becomes a blueprint for a much bigger product, and that’s him casting it and doing a polish [on the script] and doing lighting and sound design and bringing all these great people together who are gonna really make it pop. The movie’s really nothing without a great director.

As the story’s hero, forest ranger Finn, Sam Richardson adds a whole extra level to the film. Would it have been as effective with a white lead?

I don’t know. It was always going to be a diverse cast, and there were other actors in mind for other parts. So, it’s really hard to answer that question. It would have been a different movie with a white lead, but there would have been more diversity maybe in the other roles that would have also played into some of the themes in the movie. But I can’t think of a better actor for this role. And Sam Richardson, just from an actor standpoint, regardless of race, he’s the perfect guy for the part. But, you’re right. It does add a level, and it worked for everybody and was thoughtful.

This is your first film as a writer. How would you rate the experience overall?

Working with Ubisoft is just incredible. It was a really creative space and a really free and open space. We’re making independent film, and that is super-liberating. There’s not a lot of confines, so it was a great experience.

What was it like seeing your words and characters come to life when you were visiting the set?

God, it was so amazing. You can see these characters and then an actor steps into them and they just bring so much more to the characters than you ever could have imagined. They bring their own life experience and little idiosyncrasies. And then you have these quirky characters really popping. It’s unbelievable to see your words come out of great actors’ mouths.

Are horror films a good place for social commentary?

Horror films are the best place for social commentary. It’s a tradition, and part of what we wanted to do is take the sort of really fun ’80s-’90s creature-feature feel, because that’s a great time in the dark, but then you add some topical themes that really resonate with what people might be dealing with today and just really not pick a side, just lay it out there.

Oh, my God. Seeing a movie with an audience is spectacular, and it’s an experience I missed so much over this last year and a half. I didn’t even know I was missing it as much as I was. And the fact that it was a movie I wrote was secondary to just seeing a movie with people, especially a comedy. It’s so fun to see a comedy with people.

What’s next for you?

I have some more ideas that I’m playing with right now. I’d love to do more horror and maybe something socially relevant again. I would love to do some action stuff. I’ve wanted to do something with samurai or Hong Kong-style martial arts for a long time, maybe with comedy. There are so many things that I’d love to get done in my career as a screenwriter. And I just hope I can get to them all because I have a lot of good times to give people.

Stay tuned for an interview with Werewolves Within actor Harvey Guillén, scene-stealer from FX’s What We Do in the Shadows, in the days ahead!