Our friends over at ALTER are celebrating women directors this winter, and they're sharing an exclusive premiere with us today! Lauren Sick's Pare tells the story of a woman haunted by terrifying forces both external and internal, and ultimately begs the question — which is more dangerous? Written and directed by Lauren Sick, produced by Sick and Josh Ruben (Scare Me, Werewolves Within). A lonely woman discovers a bloody jacket on a secluded road in the woods and is subsequently haunted by insidious forces in a "winter not-so-wonderland." Sick stopped in to chat with FANGORIA about her new short, enjoy a bit of behind-the-scenes before diving into Pare.

Where does the title come from?

The title itself has a sort of triple meaning - to “pare” means to peel the outer layer, or skin, to get to the heart of something. And (if we’re going phonetically and not caring too much about spelling), this is a story about a couple — a pair — and ultimately the two versions of Dana that are at war inside her.

As a female filmmaker in the genre space, I am instinctively drawn to challenging and surprising stories about the internal lives and desires of women. While I love occasional gore and a good jump scare, I’m equally interested in the more subtle, psychological things that shape the human experience. Guilt, trauma, loss, shame — those creeping feelings that keep us up at night. 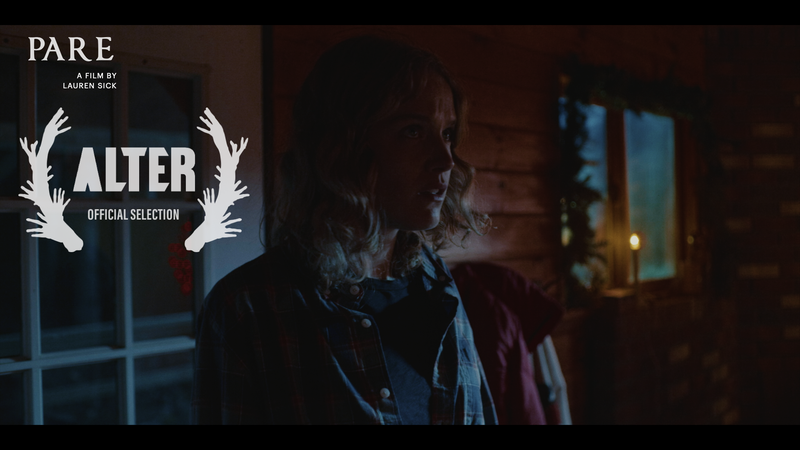 You've assembled a pretty impressive team on this! What was the process like, from inception to creation?

I think all of us were hitting our pandemic limits and were just so eager to get back on set. Once Dana and I connected and Josh (Scare Me, Werewolves Within) came on board to produce, the film came together really quickly. I wrote the script in LA in a day and we were shooting just a couple weeks later in upstate, NY.

I feel so lucky to have worked with my good friend Dana Drori on this project. She had just finished filming Freaky and Tentacles for Blumhouse, and came to our set so prepared and with such enthusiasm. I was blown away by her ability to step right into any situation, at any given moment. The whole crew was on a vampire schedule because we were filming overnights, and Dana could go from full-on cat napping to on-screen terrified in two minutes flat. It was seriously impressive.

I’m starting the process of pitching two feature films that I’m attached to direct. One is a home invasion thriller/revenge tale in collaboration with Pare producer Josh Ruben (who also happens to be my fiancé.) (And yes, having two horror heads under one roof can get weird. Our cat has become very accustomed to high-pitched screams emanating from our TV.) The other is a psychological horror about a repressed suburban family dealing with the aftermath of their teen daughter’s disappearance. Both are spectacularly disturbing and fun.

And now, check out Pare: