INTO THE VOID: LITTLE SHOP OF HORRORS Still Rules

Over three and a half decades later, Frank Oz’s film has aged like a fine wine. 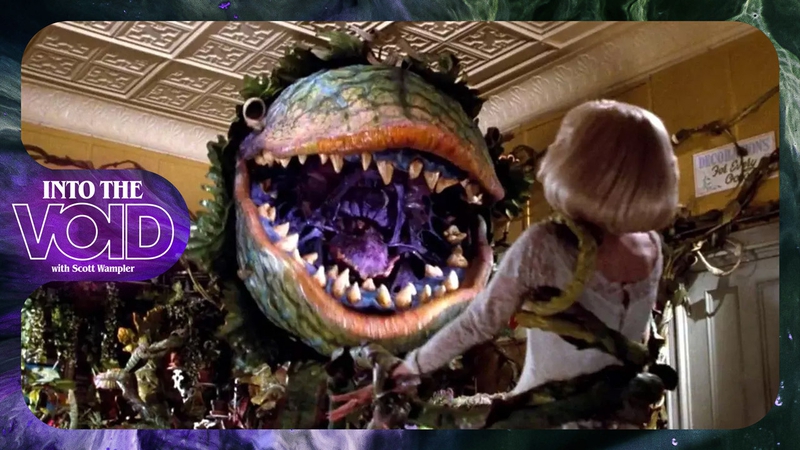 I was just old enough for my parents to take me to see Frank Oz’s Little Shop of Horrors when it hit theaters in December of 1986. Given my proclivity for monsters, creatures, and anything that might generally be considered “spooky” (surprise, I was a morbid-ass kid), I was destined to fall in love with Oz’s film from the moment they purchased those tickets. I sat there in the theater watching Rick Moranis and Ellen Greene caught up in a quasi-love triangle with a gigantic Venus fly trap from space and lost my damn mind. The film was funny, often in ways I dimly grasped that I wasn’t old enough to understand, and it was indeed creepy (me whispering to my dad during Bill Murray’s scene: “Why does that man want to be hurt?” Dad: “Ssshh.”), but the sheer spectacle of the FX work that brought Audrey II to life had me vibrating when I left the theater.

I immediately set to work trying to talk my parents into buying me my very own Venus fly trap, a notion they were not onboard with. I no longer recall what reasons they provided while stamping my request with a big rubber stamp reading DENIED (note: this is figurative, by the way; my folks did not actually force me to submit requests in writing, nor did they own a giant rubber stamp), but if I had to venture a guess, it probably had something to do with me being five years old and not having the bandwidth to properly care for such a thing. My consolation prize? A little plastic Audrey II stuffed with candy pellets (you can see one here). You’d open it up, eat the candy inside, and then … well, there wasn’t much to do with your plastic Audrey II once the candy was gone, was there? It just sorta sat there. No singing, no dancing, no bloodthirst. I was disappointed, yes, but I appreciated the gesture. 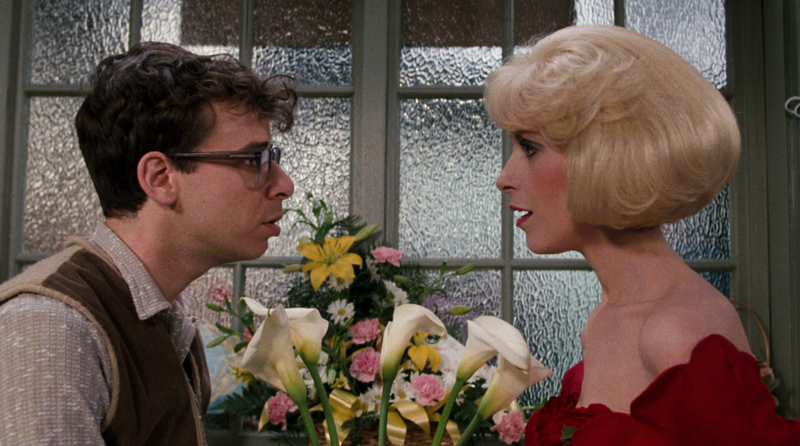 Over the years, Little Shop of Horrors has become one of my favorite comfort films. It’s one of those movies I can’t personally find a single fault with (if you can find faults within Little Shop of Horrors, please do not contact me with them; those beliefs are between you and whatever twisted little freak you call God), and in rewatching it this past week I realized that I knew very little about its production history. Sure, I’d heard a few stories here and there, and I knew that it was based on an off-Broadway musical that was itself based on the 1960 Roger Corman film of the same name, but that was about it. In poking around for further tidbits about the making of the film, I learned some interesting things!

For instance, the David Geffen Company produced Oz’s Little Shop of Horrors because Geffen himself had been a producer on the original, off-Broadway play. Geffen knew early on that he wanted to turn the show into a feature film, and he initially had Steven Spielberg on to executive produce the picture with Martin Scorsese in the director’s chair. Scorsese wanted to shoot the film in 3-D (an idea he’d return to years later with Hugo), and things were thrumming along nicely for that version of the film until a lawsuit from the writer and star of Corman’s original derailed the damn thing. Later, and presumably, with that lawsuit discreetly taken care of, Geffen offered the project to Muppets Take Manhattan director Frank Oz, and the rest is history (side note: Oz would find himself embroiled in his own Little Shop headache in 2017, when the musical’s rights holders denied him and Ellen Greene permission to mount a new stage production of the show that would have combined elements of the off-Broadway original and Oz’s feature version). 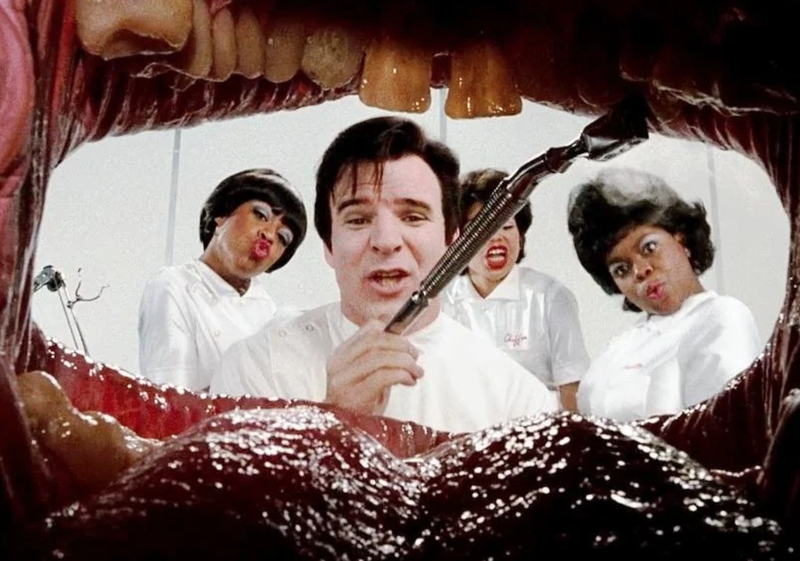 Given how well the film holds up, I’m not terribly surprised to hear that Little Shop of Horrors was still on Oz and Greene’s minds as recently as five years ago. I was similarly unsurprised when, back in 2020, we learned that Greg Berlanti was putting together a remake of the film with Taron Egerton in the Moranis role, Scarlett Johansson in Greene’s shoes, and Billy Porter voicing Audrey II (This remake appears to be dead in the water for now, but I wouldn’t bank on it never happening). There’s an undeniably infectious quality to Oz’s film, something that truly gets under your skin – it really is the perfect blend of horror, comedy, and musical, which is one the rarest genre combinations I can think of – and I have no trouble imagining a filmmaker wanting to put their own stamp on the property with a sizable budget at their disposal.

Similarly, who wouldn’t want to play these roles? Every single character in Oz’s film shines, from the principal trio to the unhinged dentist to the “Greek Chorus” of singing ladies who keep the story moving along. Even the over-the-top radio DJ (played by John Candy) gets to steal a scene. That Oz’s film is so brilliantly cast surely helps cement its status as a classic, and matching that casting prowess here would definitely be a tall order … but honestly, I think it could be done, and seeing new interpretations of iconic characters is absolutely in keeping with the very history of musical theater. If I were an actor capable of singing, I’d be chomping at the bit to get in on this action. 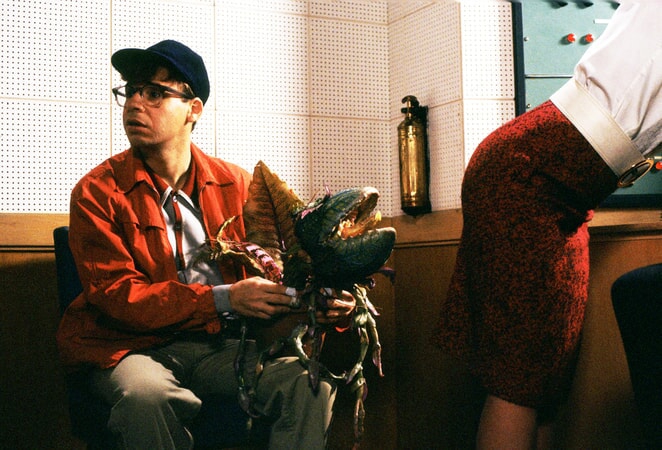 And speaking of singing, how great are those fucking songs? I mean, really. I was joined in my recent rewatch by a number of pals, all of us watching together remotely, and eventually the question arose: “What is the best song in Little Shop of Horrors?” Every single person had their own answer, then we all had alternate suggestions. It’s a maddening thing to think about, honestly, but that’s just what happens when every last tune in your show is a banger. We simply could not form a consensus. A few days later, I found myself interviewing a Tony Award-nominated songwriter for an upcoming episode of THE KINGCAST, and after he namedropped Little Shop several times, I decided to toss the question to him. I figured if anyone had the wherewithal to solve this mystery, it’d be someone with actual experience in the field, but no – he couldn’t land on a single choice, either. Maybe y’all can figure it out.

Usually, posts like the one you’ve just read are timed to anniversaries, or on the backs of a new Blu-ray release, or maybe after a beloved person involved with the film-in-question dies. I have no such events to pin this particular post on, but whatever – maybe we shouldn’t be waiting for people to die or for an arbitrary number of years to pass before showering the things we love with compliments, and it’s with that attitude that I decided to write about Little Shop of Horrors this week. Here’s hoping that inspires you to mount your own rewatch (or to seek out the version of the film which has an utterly bugnuts ending that you really need to see to believe), or share it with a friend who’s never seen it before. However long it’s been since you last saw it, it’s been too long … which I am putting in writing as a means of giving myself an excuse to rewatch it again right now.