INTO THE VOID: An Ode To The Predator’s Hot New Look 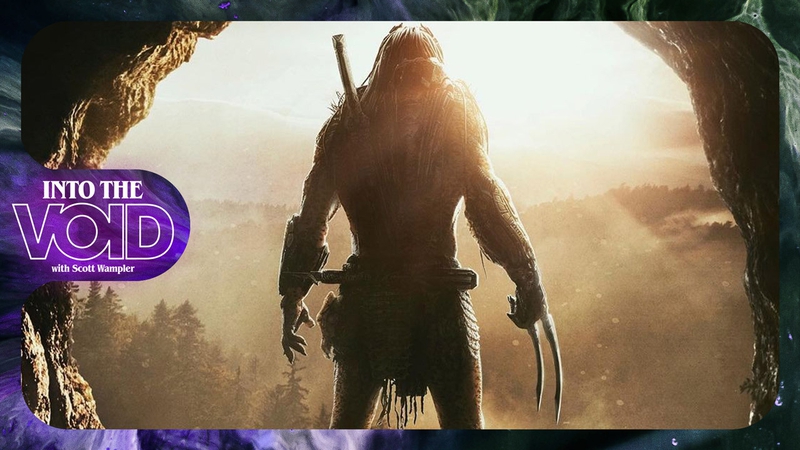 Last Friday, I piled into a friend’s living room with a bunch of other pals to watch Dan Trachtenberg’s Prey (currently viewable via Hulu, in case you’ve been living under a rock). Like so many of you, we were blown away by the latest entry in the Predator franchise. I mean, what’s not to love? Prey is beautifully shot, the cast is uniformly excellent (particularly Amber Midthunder in the role of Naru; hope she’s excited for superstardom), the script both delivers on and subverts our expectations, and the kills are scarier than ever. Finally, after years of sequels that, even at their best, could not be recommended without making a few upfront qualifications, here was a brand-new Predator movie we could full-throatedly champion to anyone who’d listen! What a gift!

I could go on and on about the various things I loved about Trachtenberg’s film, but because this isn’t a review, I’d like to narrow the focus here to what was undoubtedly my favorite thing about Prey: the latest design of the Predator itself. Just look at this terrifying motherfucker! 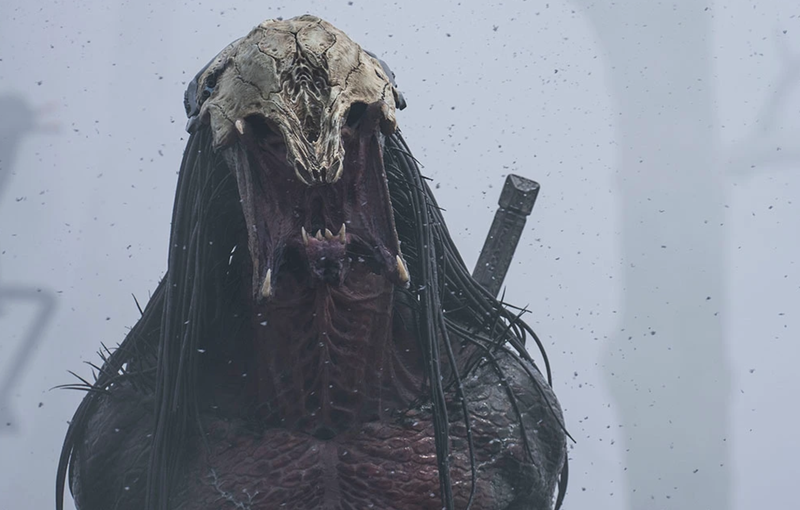 Of course we all love it when our favorite franchises gift us with a shiny, new toy, but the Predator’s redesign was a particularly big deal to a guy like me. My horror tastes run the gamut, but chief among them is an enduring love for creature design, one that took root when my age was still in the single digits. I devoured everything monster-related when I was a kid, watched everything my parents would allow me to watch (Creature From the Black Lagoon, Gremlins, Frankenstein, and so on), then really kicked into overdrive around 1989, when I received a copy of Jeff Rovin’s Encyclopedia of Monsters for Christmas. I lugged that bad boy around everywhere – to elementary school, to church (where they worshipped a completely different holy text, one I had far less interest in), to family gatherings, you name it. That sizable tome was jam-packed with monsters, aliens, ghouls, and at least one killer dessert topping (The Stuff) that I’d never even heard of, and I was determined to learn everything about each and every one of those tragic creatures.

Around this same time, I caught an edited-for-broadcast viewing of Ridley Scott’s Alien, which instantly became my favorite movie monster (note: the Xenomorph will likely never be dethroned from that position; H.R. Giger, man, what do you even say about a guy that talented?), and Fred Dekker’s The Monster Squad, which delivered not only a very satisfying Wolfman, but also an exciting reimagining of Black Lagoon’s Gill-man courtesy of Stan Winston Studios. By this point, I was frothing at the mouth about creature design; in retrospect, I’m honestly kind of surprised that didn’t end up being my chosen career path. All of this conspired to make “OK, but does the monster look cool?” my very first question when evaluating any creature feature. And I’ll tell ya something, my friends: over the last 20 years or so, the answer to that question has been “Not really” far more often than it’s been “Oh, hell yeah it does!” 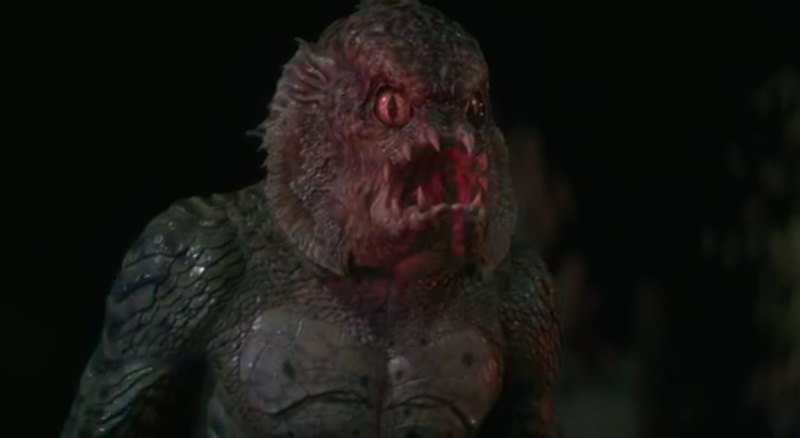 Y’know, somewhere along the line I read that the best way to determine if your creature design is worth a damn is to picture the monster in silhouette – can you still tell what monster it is, what movie it came from? If so, chances are you’ve got something striking on your hands! Try applying that same test to, say, the monster from Super 8 and see if you can instantly tell what movie it’s from (I am certain someone will pipe up to say they could do this all day, every day, no problem, and that I’m insane for even suggesting anything to the contrary, but I’m willing to bet the average moviegoer could pick Giger’s Xenomorph or Milicent Patrick’s Creature out of a lineup far more rapidly than they could determine whether the big, hulking monster with too many arms came from Cloverfield or Super 8). Using this test as a guideline, the design brought to bear on the original Predator in 1987, passes with flying colors.

That design (also via Stan Winston, naturally), remains one of the best movie monsters in all of film history, a legendary feat of monster-making that I figured the franchise would never be able to top. Which isn’t to say they haven’t tried! The Predator’s look has been modified and updated on many occasions over the years, and while some of those efforts have been memorable (I was particularly fond of the uber-Predator from 2010’s Predators, and will even reluctantly concede that the “Predalien” from AVP: Requiem is kinda cool), none have come close to really revolutionizing the look of the galaxy’s deadliest hunter. For the most part, they’ve just been new coats of paint, thus reinforcing my long-held belief that you really can’t improve on perfection.

And then along came Trachtenberg and company.

Working alongside SFX supervisors Alec Gillis and Tom Woodruff, Trachtenberg delivers a Predator that – in this writer’s humble opinion – stands shoulder to shoulder with Stan Winston’s original creature design. The bone face mask, which the new Predator has apparently tricked out with an early version of the classic laser sight (when I clocked this during Prey, I made a noise that sounded like this: “OhohoohhhHHHFUCKyes”), is a clever reworking of the original Predator’s steel mask. It’s scarier, it makes sense given the chronology we’re working with here – remember, Prey’s actually a prequel – and it fits neatly into the film’s overall aesthetic. In a very-worth-reading little interview over at IndieWire, Woodruff explains that Trachtenberg’s decision to make the new Predator “scarier” led his team to “talking about whether or not this could have been the origins of demonic spirits in the eyes of the Native people, such as the Wendigo. That influenced our thinking.” How cool is that?

Then there’s the Predator’s actual face, which is also scary as all hell. Trachtenberg waits as long as possible to reveal his monster in full, and when he finally does, it hits like an uppercut: the slimmer face, the widened mandibles, the deeply-set eyes glaring out from the dark pit of their sockets. If the original Predator looked gruesome and alien, this Predator looks like a full-blown nightmare, possibly inspiring viewers to recoil rather than leaning in for a closer look. I was gobsmacked by the design work here, simply could not get over the fact that someone had finally done it. This is, without question, a movie after every monster kid’s own heart. 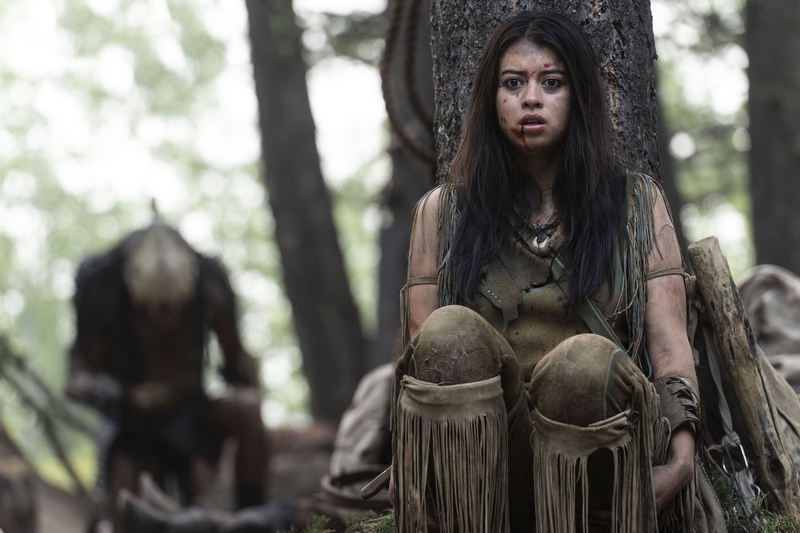 I’m also a big fan of what’s been done to the Predator’s body. Our would-be interstellar champion is looking more svelte and agile than ever these days, and the pencil-thin new dreads on the top of the Predator’s head have a sinister, whip-like feel to them (as opposed to the chunkier dreads of the 1987 version). The Predator’s always given good “intimidating screen presence,” of course, but this iteration of the Hunter just looks deadlier than anything that’s come before. It must’ve taken balls the size of watermelons to futz with the original design to this degree, but it’s a gamble that absolutely paid off. It’s probably too early to decide whether or not this is my overall favorite Predator design, but I will confess that the question’s been hanging heavily ever since I caught Prey. I expected Trachtenberg to knock this movie outta the park, but I didn’t expect this. Holy hell.

Anyway, three cheers for Prey and its excellent creature design. I’m a big believer in shouting this stuff out whenever it happens (the last time I recall being so blown away by a movie monster, it was that giant…I dunno, whatever that thing was in David Bruckner’s The Ritual), because it’s simply an area that far too many movies have been half-assing in the modern era. When we celebrate such inspired, unusual designs, we also encourage other filmmakers and creature artists to step up their game a bit, and Prey absolutely offers a new gold standard for everyone else in that game to aspire to. What a gift not only to them, but for monster kids everywhere.