In Defense of REVELATIONS: The HELLRAISER Movie That Could Have (and Should Have) Been More

A film forever remembered for all the things it wasn’t. 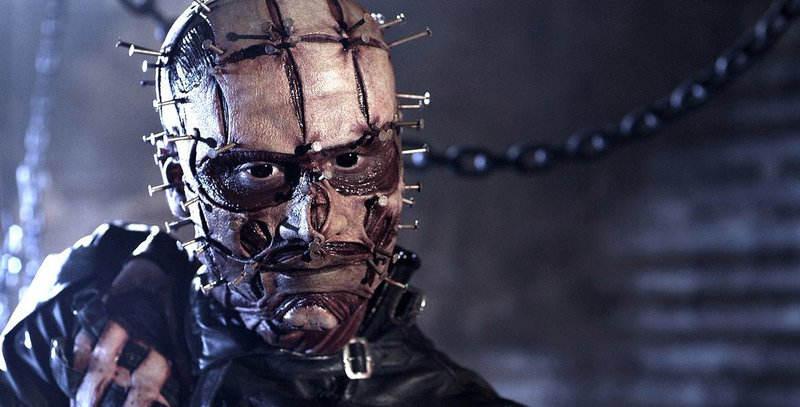 Pinhead, is that you? Stephan Smith Colllins, looking all dapper (and distinctive). (Photos: MovieStillsDB)

Recently, amid the horrors of quarantine and the looming collapse of society as we know it, those fickle and capricious entities known as the pop-culture gods deigned to grant us mere mortals a small if not insignificant gift: Hellraiser was coming back and in a big way.

For years, the once noble franchise had meandered in direct-to-video limbo, surviving like a parasite, trojan-horsing a motley crew of increasingly cheaper-looking Cenobites into stories never intended for them. Got a Faustian detective tale about a crooked cop metaphorically selling his soul through corruption and apathy? Let’s have Pinhead show up and lay the smackdown on him at the 11th hour. Reporter investigating a creepy death cult? Why not have their object of veneration be Lemarchand’s Box? From 2000-2005, Clive Barker’s once fresh, innovative and original concept had gone from a potentially zeitgeist-defining series for the ‘90s to an also-ran video-store curiosity spoken of in the same breath as the Leprechaun and Wishmaster films (not that there’s anything wrong with them). Now, it would have its glorious return — not only was Hellraiser coming to the big screen for the first time since 1994’s abominable Bloodline, but it was also going to have a real, original script, not simply a slush-pile first draft that someone had run a find-replace on to drop Pinhead into the proceedings. No, this movie would be a Hellraiser original penned by Ben Collins and Luke Piotrowski, the minds behind FANGO’s own Sisters of Samhain — a script that I first read a few years ago and giddily pitched to the rest of the acquisitions team as “R-rated Hocus Pocus.” It will hopefully be a return to form for a universe that once had such promise.

Though it’s hard to remember after so many films steeped in literally infernal imagery, the Hell and damnation of the earliest stories was always metaphorical — for all their deviance, the Cenobites were more like cheerleaders for the lost souls who served as the real villains, very human antagonists whose unchecked desires and selfishness led them to commit acts more real and crueler than any rubber monster shenanigans. More Lovecraftian than Miltonian, the Cenobites were beings beyond human conceptions of morality; it was a series of increasingly confused and confusing sequels that went the easy route of just saying “they’re demons” and being done with it. Between evil video games and twisty murder-for-money plots, though, there was one Hellraiser sequel that tried — however improbably — to bring the franchise back to what it had once been: 2011’s Revelations.

Revelations is something approaching Hellraiser: Less than Zero edition. Debauched trust-fund kids Steven and Nico abscond with their parents’ money to Mexico for a week of drunken partying and the special kind of hedonism only afforded to the very young, rich and good-looking. While most guys in their position would simply return from their trip with a few STDs and memories that would haunt normal people, Nico and Steven don’t return at all. All that comes back, in fact, are the pair’s belongings, handed over to their parents by a police force more concerned with increasing cartel violence than in the disappearance of some American dipshits who should have known better. Among those belongings are a videotape recorded by Steven documenting the pair’s final days — a videotape that Steven’s mother refuses to show his sister, Emma, but which she herself spends the next year obsessively watching in private. As the anniversary of the boys’ disappearance approaches and the families gather for something approximating a memorial dinner, Emma takes it upon herself to finally watch the video and learn what happened during what may have been the last days of her brother’s life —and what role a certain puzzle box may have played in them. 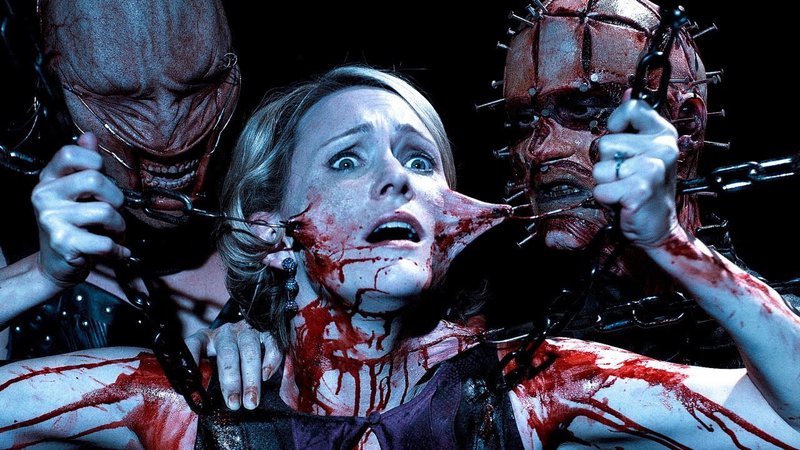 Devon Sorvari gets a facelift.

Revelations will forever be remembered for all the things it wasn’t. It was the first movie where Doug Bradley wasn’t Pinhead — nominally left out of script and development discussions, he refused to participate after learning about the quick turnaround time and rushed production schedule. That rushed schedule itself spoke to the fact that this wasn’t even technically a real movie, in the sense that most audiences understand that term. This was a cinematic ashcan copy, meant for little more than to act as a feature-length copyright extension for TWC on the Hellraiser franchise. It didn’t need to be good so much as it simply needed to be — and as long as some money was going to be invested in keeping the rights to the Hellraiser characters, why not dump it straight to DVD and maybe recoup some of those losses? That ethos is apparent from the first frame of the movie, which practically screams “this whole thing cost us $50!” The camerawork looks cheap even by 2010s DTV standards, the sets are barely dressed and the Pinhead makeup is some of the worst of the series — partially the result of casting the very distinctive Stephan Smith Collins in the role as opposed to a more generic-looking individual who could have disappeared into the character. Yet, despite the shoddy aesthetics, breakneck pace (including opening and closing credits, the whole movie is only an hour and 15 minutes long), and uneven SFX, Revelations succeeds in being something few of its predecessors were: a real Hellraiser movie.

It helps that, for as little care went into the final product, there was at least some investment in the script, penned by longtime series makeup artist Gary J. Tunnicliffe, who has been with the franchise since part III. For the first time, it’s apparent from early on that this is and was always meant to be a Hellraiser movie; if you’re willing to look past some of the superficial flaws, it acts as a weird sort of love letter to series fans. The Vagrant character pops back up after a long absence, a third-act twist revolves around someone wearing someone else’s skin as a disguise, and most notably, for the first time in a while, themes and ideas of warped desire and spiritual deviance come to the foreground. Pinhead was quick to remind us in Hellbound that it wasn’t solving the box that necessarily summoned the Cenobites, it was an individual’s own spiritual sickness. It was a fascinating idea that helped cement the Cenobites less as predatory monsters and more the natural result of already wicked people’s reckless exploration of realms best left alone. If you go wandering around the jungle, don’t be surprised if you meet a tiger; and if you just keep looking for the next bigger and bigger fix you might run into the Cenobites. They weren’t so much punishers as they were the natural conclusion of so much self-destructive behavior, and that’s exactly what they are again in Revelations.

We don’t exactly get complex portraits of the families in Revelations but we get to know enough of them that we can recognize their type: rich, spoiled and vapid, forever chasing the next fad or spiritual craze in the hopes it will fill the holes they have created inside themselves. It’s not quite a scathing indictment of 2010s Cali culture in the way that, say, GTA V was, but it does a damn fine job of wedding those ideas to the roots of the franchise for a movie that finally brings us back to basics. 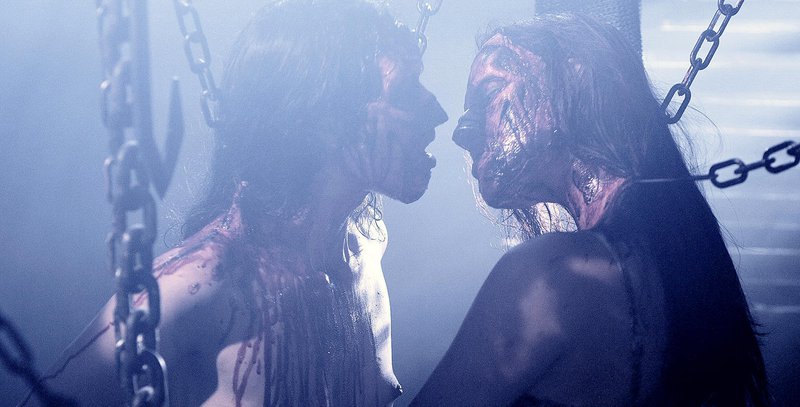 Too, despite the previous films being DTV and ostensibly unfettered by MPAA ratings, it’s the first entry since Inferno to willfully wade into the uncomfortable wedding of sex and death that was another hallmark of the series. There’s subtle but effective employment of the “rich people are into incest” trope here that feels right for a Hellraiser movie, and which further serves to establish that, if nothing else, at least Tunnicliffe fundamentally understood what the franchise was about.

To be fair, there’s probably more than a little nostalgia built into my affection for Revelations. While Friday the 13th is my favorite horror franchise, Hellraiser is a shared favorite for my wife and me, and we spent the first year of our marriage tracking down and watching the first eight films. Revelations came out a few months after our first anniversary, and it was the final film we ever rented from a Blockbuster, not too long before we moved out of our first apartment. By that point we were neck-deep in the Hellraiser mythos and just eager for a return to form for our favorite interdimensional sadomasochists; we were both happy to get that, and I even penned a passionate review of the film for IMDb that may still be bouncing around somewhere. Personal affection aside, though, it’s a shame that Revelations will probably never get the respect it deserves. Stripping away the cheapjack elements of the film, you get a worthy spiritual successor to the first movie and a fitting entry in the Cenobite canon. Here’s hoping Piotrowski and Collins can achieve similar success with the added love, care and budget that Revelations didn’t have. I’ve got a tremendous amount of faith in them and can’t wait for them to really tear some souls apart.