"He Was Born In Blood. Just Like You." DEXTER: NEW BLOOD Revival

DEXTER was the tale of siblinghood, and DEXTER: NEW BLOOD is about parenthood. 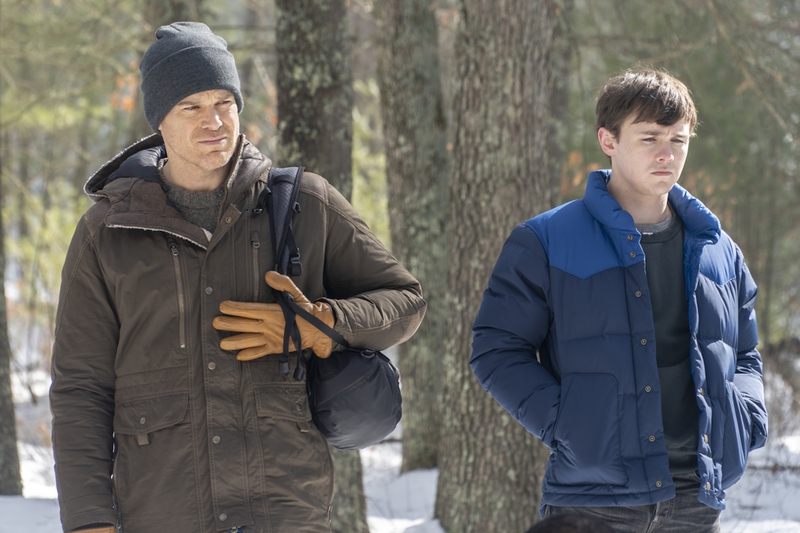 The following contains spoilers for the original series, Dexter, and discusses the first five episodes of Dexter: New Blood.

REPEAT: SPOILERS IN ABUNDANCE BELOW.

It's been ten cold years since Dexter chucked his sister off the side of a boat and drove off into a storm. The finale of the moving tale of a serial killer came to a screeching halt when Dexter evaporated into a hurricane and reappeared in the blistering north. Eight seasons of television explored the nature versus nurture story of the blood and knife enthusiast, but the parental relationships never took center stage. Dexter is a story about siblinghood. Now, ten years later, Dexter has exited the chrysalis and grown from the Miami Metro lab geek into the Iron Lake shopkeep for Dexter: New Blood, a story of parenthood.

The original eight seasons of Dexter are often distilled down to the nature versus nurture conundrum; did Dexter have psychopathy in his blood, and did the teachings of Harry Morgan (James Remar) make him someone different? Dexter's father-son relationship with Harry is one of the show's main threads, but Harry is never more than a ghost. The comparison point for the show's central theme is Dexter versus his siblings, those with whom he shares the biological nature, and those with whom he shares a nurtured upbringing. 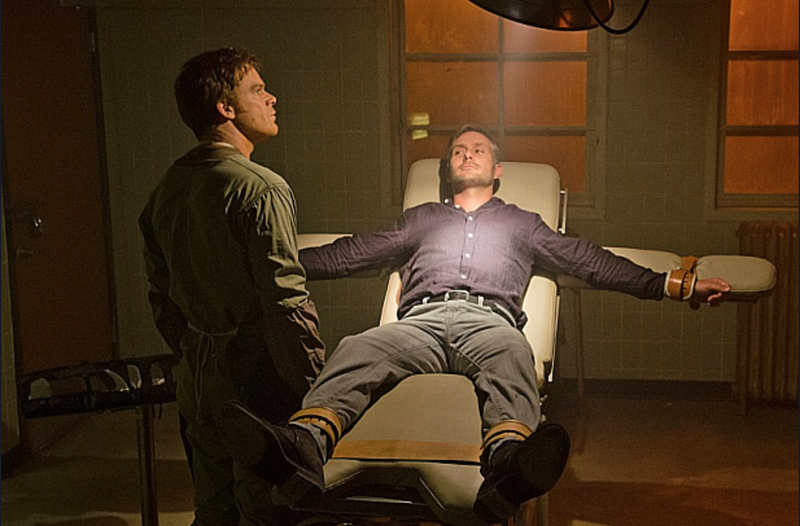 Sibling relationships remain the thread through the series, a motivator for almost every main villain from Brian Moser (Christian Camargo) to Oliver Saxon (Darri Ingólfsson). But at the close of the series finale, Dext poured his sister into the water and made one last phone call: a call to his son Harrison. This tiny gesture set us up for what's to come, Dexter: New Blood (get it!?), a story now focused on parental relationships. With the siblinghood at the core of killer reveals in Dexter, parenthood left the reveals in Dexter: New Blood under our noses.

The first season of Dexter laid out the core of the titular antihero. Opening the series, Dexter introduces his adoptive sister, Debra Morgan (Jennifer Carpenter) by saying, "I don't have feelings about anything, but if I could have feelings at all, I'd have them for Deb." Though their relationship wavers in multiple directions, their pairing grounds and drives the show. Every conversation about Harry as a father figure, shaping Dexter, relates to how he compares to Deb. 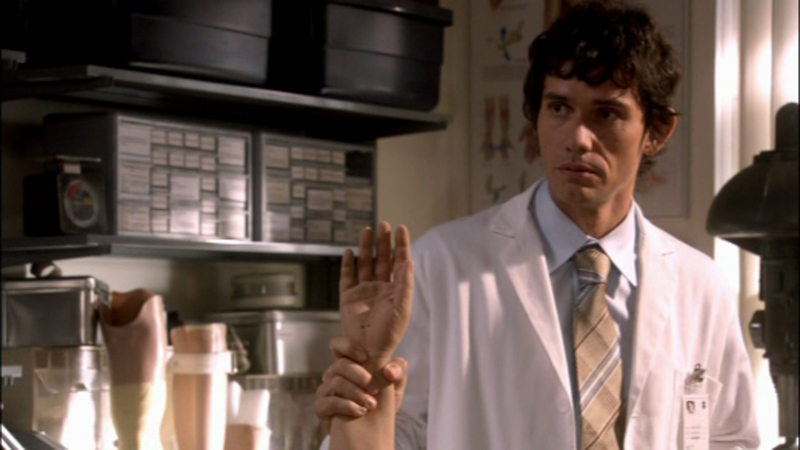 Dexter spends the first season believing himself to have met his match in The Ice Truck Killer, a brutal villain who stages crime scenes as tableaus to play games with him. The Ice Truck Killer turns out to be Brian Moser, Dexter's biological brother, centering the reveal in a sibling relationship. In the finale of the season, Moser stages Deb for Dexter to kill, and Dexter makes a choice; he kills Moser and rescues Deb. In that moment, Dexter makes his "nurture over nature" determination and decides that water is thicker than his precious blood.

Dexter bounces around his second season with Lila (Jaime Murray) before deciding it's more important to be a father figure for his girlfriend, Rita's (Julie Benz) kids. It's around here that Dext begins his habit of sidelining parental responsibility in favor of sibling relationships. At the top of season three, he learns Rita is pregnant with their child, but instead of focusing on that, Dexter opts to answer the sweet siren song of chasing a killer named Freebo. The season's inciting incident is Dexter being forced to kill a potentially innocent man, Oscar Prado (Nick Hermz), brother of the season's main villain, Miguel Prado (Jimmy Smits). The relationship between Miguel and his brother drives the following episodes, leaving Dexter in a precarious position after befriending Miguel, who is on the hunt for his brother's killer, who happens to be Dext himself. Dexter manages a forming brotherhood with Miguel, having killed Oscar, and raising the suspicions of the third Prado brother, Ramon (Jason Manuel Olazabal). In doing so, he sidelines Rita and the kids, leaving her insecure. 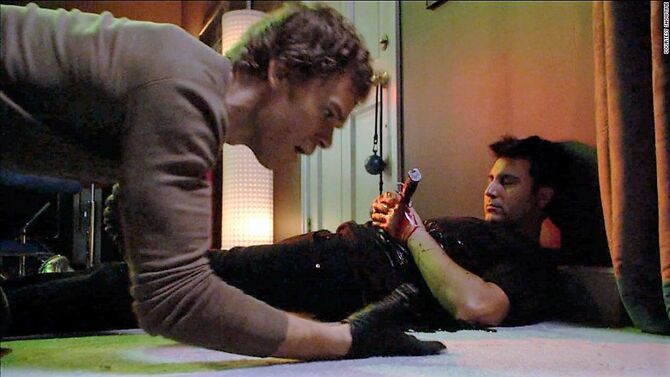 Then comes fan-favorite season four and The Trinity Killer (John Lithgow). With Prado off his proverbial case, Dexter is motivated to focus on his family and his new position as a father and stepfather. He continues to create insecurity for Rita, who discovers he's kept his Miami condo (and his double life). Desperate for a kill, Dexter sets his sights on Trinity, hoping to hunt down the presumed lone wolf and flick him off of the earth. But what Dexter discovers is that Trinity isn't the loner from the FBI profile, he's a family man and a father. Dext opts to put a pin in his murder plot to learn to be a better father and simultaneous serial killer from Trinity. But as the season barrels on, it's revealed that Trinity isn't exactly the warm and fuzzy father figure; he's an abusive monster, broken by a dark experience with his sister. Trinity's cycle of kills always starts with killing a woman in a bathtub. At ten years old, he surprised his sister in the shower, which caused her to slip through the glass and slice her femoral artery and die. It's this experience, one with his sibling, that drives the killer and makes clear the motivations that the FBI struggled to decipher.

Season six introduces Angel Batista's (David Zayas) sister, Jaime (Aimee Garcia). The relationship between Jaime and her brother is a series focus, but Jaime also functions as a convenient character on whom Dexter can dump his child. The core villain of this season appears to arise from the relationship between Travis Marshall (Colin Hanks) and his professor (Edward James Olmos). Deb struggles with her feelings for Dexter throughout the season, played against the relationship between Marshall and his sister, Lisa (Molly Parker). Much like the dichotomy between Dexter and Deb, it's revealed that Travis is a killer while his sister has clean hands. This relationship should have kept Travis on track, but it's when he discovers his sister spoke to the police that he loses himself and kills her. This sets up the finale reveal by mirroring it; Dexter kills Travis and is discovered by his police officer sister, who is now faced with deciding whether to turn in her brother. 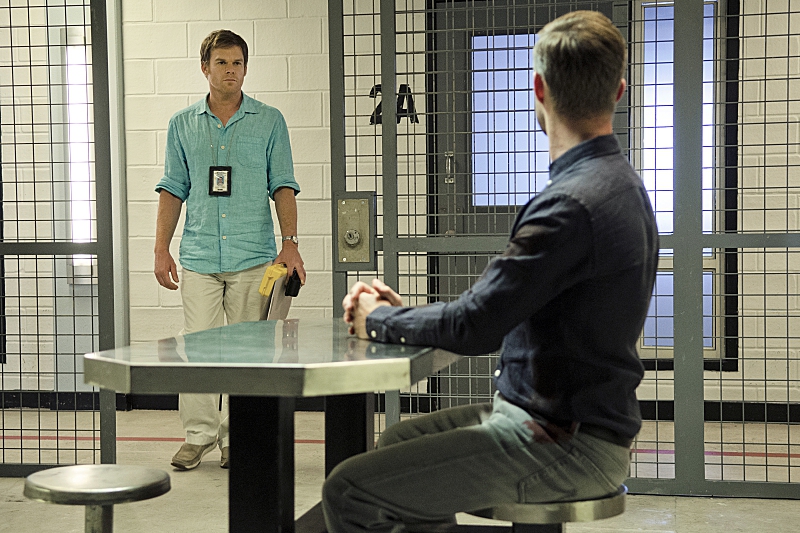 The close of the original run sets up the transition from sibling relationships to those of fatherhood. Dexter meets Evelyn Vogel (Charlotte Rampling), a would-be mother figure who worked with Harry to create the Code by which Dexter lives. It's Harry's Code that keeps Dexter's kills clean and on a specific path of morality. Dexter isn't like other killers; he only kills bad guys after verifying their guilt, something taught to him by these parental figures. Dexter joins Vogel to chase the Brain Surgeon, a killer. The Brain Surgeon turns out to be Oliver Saxon, Vogel's biological son, whom she was unable to fix with her work. Again, while she is a de facto mother, the theme of the season remains Dexter as compared to his de facto sibling, while trying to save his adoptive sibling, Deb. The final face-off of the series is between Dexter and his two stand-in siblings: Deb and Saxon. Dexter believes himself to be leaving the desire to kill Saxon behind to jet off to Argentina to start a life of fatherhood, but he gets caught up in a sibling showdown. When Saxon injures Deb, Dexter again sidelines his parental role, opting to murder Saxon and be with his sister until the end. Then, just before he launches himself into a hurricane, Dexter makes one final phone call to his son, Harrison.

Enter Dexter: New Blood and the return of Harrison (Jack Alcott). If the season eight finale showed Dexter leaving his sister behind and sending love to Harrison, the revival's premiere drives it home. Having changed his identity and relocated to Iron Lake, Dexter is visited by his son. Now with Deb in the role of the ghost on his shoulder, Dexter struggles with whether to let Harrison into his life. His ultimate decision; to ignore the voice of his sibling and be a dad. "' Dad.' My new favorite word," dances in his voiceover. 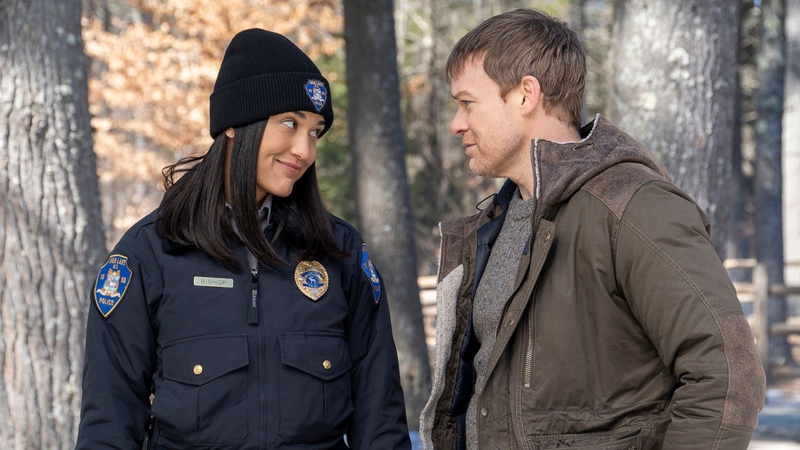 Now, parental relationships drive the series. Dexter's girlfriend, Angela (Julia Jones), is struggling with the relationship between her and her adopted daughter. Much like Dexter chose his adoptive sibling as his family in the original run, Angela and her daughter choose each other and brush off references to their "real" relationships.

After silencing Deb, Dexter finally makes his first kill at the tail end of the opening episode. His target, Matthew Caldwell (Steve M. Robertson), is the notorious wealthy son of a resident. Hoping he'd buried his mistakes, having successfully set the cops on the wrong tracks, Dexter is thwarted when Matthew's father, Kurt (Clancy Brown), arrives and insists the search continue. It's the battle of the parents as Dexter faces off against Caldwell, staving off Angela's investigation. He has to balance this war with the realization that his son might have inherited more from him than his natural charm. Dexter had hoped Harrison would escape the rite of the dark passenger, but soon discovers his duplicitous nature, uncovering that he might have slashed a boy and lied about it. The nature versus nurture story has now extended from the comparisons between Dext and Deb to Dext and his son. Glancing at the straight razor hidden in Harrison's room, Dexter hears Deb's ghost over his shoulder, "Born in blood. Just like you." 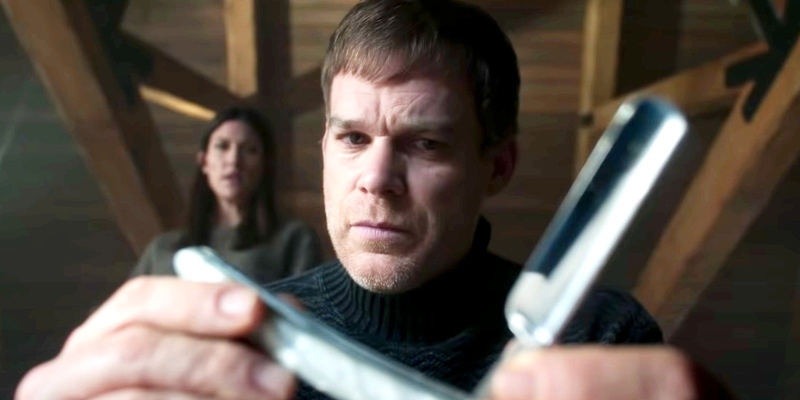 Dexter spent his entire original series run sidelining parental responsibilities to chase killers, killers whose sibling relationships were their core drivers and hints at their reveals. Dexter: New Blood is about a different man and different themes. He's a father, and this is a show about parenthood. Though we've caught a glimpse of what Caldwell might be up to, many series mysteries remain. If we can springboard from what we know about the original series, maybe parental relationships are at the core of the revival's biggest mysteries.