Speaking with Harvey Guillén from the recent ensemble horror comedy. 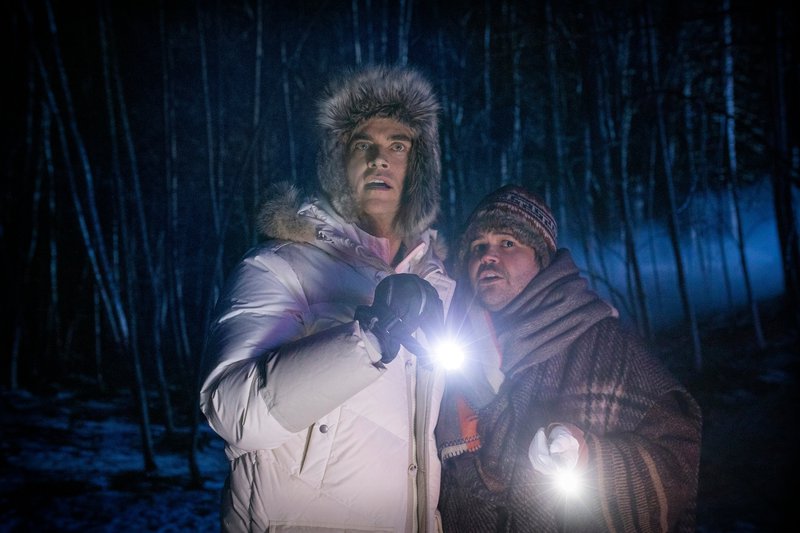 Cheyenne Jackson and Harvey Guillén in WEREWOLVES WITHIN (2021).

Harvey Guillén must have a thing for creatures of the night. First the 31-year-old actor staked out a scene-stealing supporting role as Guillermo de la Cruz, frustrated human familiar to a vampire gang, on the hit FX series What We Do in the Shadows. Now he’s garnering more accolades as a suspected lycanthrope in the IFC winner Werewolves Within, currently in theaters and VOD.

In the exclusive interview below, Guillén talks about his Werewolves Within turn as city-transplant Joaquim Wolfson, who, along with husband Devon (Cheyenne Jackson), finds himself holed up at a winter inn as a mysterious monster preys on the stranded townsfolk and guests.

Tell us about your character, Joaquim Wolfson.

Well, it’s all in the name. With a name like Joaquim Wolfson, the werewolf might be right in front of us [laughs]. He’s wonderful. He’s moved into a small town now with his partner, played by Cheyenne Jackson, who’s wonderful, too, brilliant and so charming. And the town is divided because there’s a new pipeline going through that’s offering to buy up everyone’s property. But half the town doesn’t want to sell because they love the small-town living, and half the town wants to sell because they love money. So, greed or passion, which one will win? Comedy ensues.

What attracted you to the role?

It was actually a friend who told me about it. She said that her friend, Josh Ruben, the director, was working on a project. They thought I would make a great Joaquim and asked if they could pitch me the idea. And so, Francesca called up Josh to connect us. And over the phone he sold me on the idea. He has such a vision for this film that I felt safe from the get-go. I was like, ‘Oh, he knows what he’s doing. This is his genre. He loves this, lives and breathes it.’ Then I signed on to do it and, weirdly enough, that’s when Josh asked me, ‘Who should play your husband?’ And I was like, ‘Oh, let’s see, someone who’s handsome. Who’s tall. Who’s funny. Who’s charming… how about someone like Cheyenne Jackson?’ And he said, ‘OK.’ And then we got Cheyenne Jackson! [laughs]

You deserved a producer credit for your casting help!

No. Cheyenne keeps saying that I should get an agent cut because I booked him that role. And when we were filming the movie, I knew about another project that was happening. And I said, ‘You would be great for this role.’ And sure enough, I got him an audition, and he booked that too [laughs]. I’m quitting acting, and I’m now representing Cheyenne Jackson full-time [laughs].

Did you find these two characters empowering to the gay community?

I do. It’s nice to see real-looking human beings being together, and love is love at the end of the day. Plus be successful and show that you’re thriving and you can be queer; you can be a multimillionaire because you worked really hard, and you can own a yoga studio if you want to do that. The possibilities are endless. So, I like the actual aspirational living that we presented, and that you could have a wonderful life and be queer.

Did you and Cheyenne do any preparations together?

Yeah. We spent weeks and weeks going on romantic dates [laughs]. No, we met briefly when we got to where we were staying in upstate New York and talked about what our characters’ background was and how we ended up loving each other. ‘Where did we meet?’ We did a little bit of backstory just so we knew we were on the same page. And that’s where our timing came off from; we just wildly bounced off each other really well. We did so well on the screen and off, just talking to each other. I could talk to him for hours. So, it worked out perfectly, and it was kind of luck as well.

Did you find the story’s resolution a surprise when you first read it?

When I first read it, it was nice because the writer [Mishna Wolff] did a really great job of sprinkling clues of maybe where someone else could be at fault. I liked that it was really well written to direct you a certain way while fooling you, or take a U-turn and go back and start over. There are different ways of ending the story if you really wanted to.

The film has such a wonderful ensemble cast. Was working on it like summer – or winter – camp?

I keep joking that it’s like going to Class Clown Camp, where everyone who was a class clown at their school is now put into one camp for the winter. I remember the first night we all hung out at the chalet that was provided for us at the campsite. These people were so funny. Each one of them is a walking show. And so, you can watch each channel because even if you tune away from one channel to the next person, they’re so entertaining and charming and funny that you never want to turn away. I don’t need a subscription to any Netflix or Hulu. I just need to be around this cast 24-7.

Do you have any other anecdotes about shooting the movie in upstate New York?

Well, it was snowy and pretty cold and the middle of winter. It was just fun to be up there because we made so many inside jokes. We were staying at this never-before-used adult campsite called Urban Cowboy. It was really hipster; they had a bathtub in your room, but no TV or Internet because they want you to disconnect. So, it was nice to do that. We were like, ‘This is cool. This is fun.’ But when it came to basic necessities like, ‘Oh, yeah, we need to go to the grocery store. Where’s the grocery store?’ And it’s like, ‘Oh, it’s 36 miles away.’ ‘Oh, OK. Where’s the nearest gas station?’ ‘That’s 20 miles.’ The joke became, ‘We haven’t officially opened the camp yet.’ So, it was a soft open. They kept saying, ‘It’s a soft open, so we don’t really have a bar set up yet.’ ‘Oh, is the restaurant open?’ ‘It’s a soft open, so no restaurant yet.’ ‘There’s no running water in my room.’ ‘It’s a soft open. So, we’ll have to look into it.’

Was naming your character Wolfson an obvious misdirection on the screenwriter’s part?

I think so. And I like to think that it was also placed in there with the idea that everyone has their flaws in the movie, these characters there, nobody’s perfect. And at the end, you have to ask yourself, ‘Who’s the real monster?’ This wolf that everyone’s looking for or your selfish needs and wants?

Before we go, can you tell us what to expect on the next season of What We Do in the Shadows [returning September 2 on FX]?

Well, we definitely left you with a big cliffhanger. The secret’s out that Guillermo is a descendant of Van Helsing. Now we have to live with the consequences of that, and we pick up right where we left off. And we will be introducing some new characters this season, one of them being a siren. We celebrate Colin’s 100th birthday. We get a hellhound for the house. And we also have ex-lovers come and visit, which may or may not make certain characters a little jealous.

Besides season three, do you have anything else you’re working on?

Yeah, I’m right now finishing up the first season of Reacher for Amazon, and that’ll come out later in the year. I’m super excited to bring Lee Child’s books to life. And it’s been an amazing experience. It takes place in Georgia, so I play a medical examiner with a Southern accent.

First vampires, now werewolves. What’s next for you, mummies?

I know, I’ve got to get my agent on the phone! ‘Someone get my agent!’ Yeah, mummies would be great. Brendan Fraser wants to come back, and we team up as some kind of mummy duo. I guess that could happen.

Check out the summer issue of FANGORIA, with more exclusive Werewolves Within coverage, available now. Plus, see our interview with screenwriter Mishna Wolff here.