The final entry of a three-part examination of the genre's thousand-year roots. 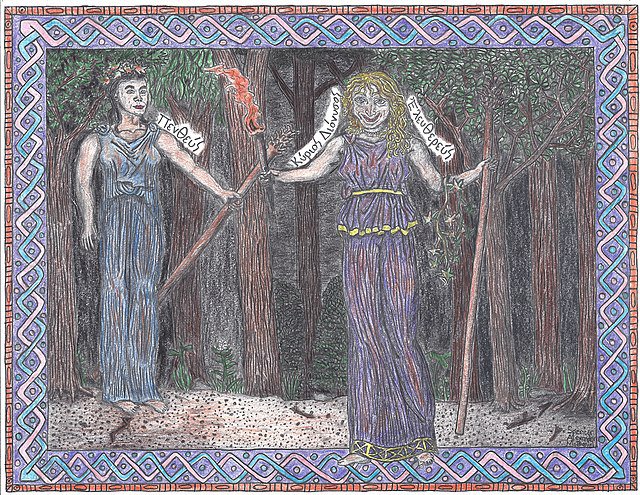 Depiction of Pentheus and Dionysos in THE BACCHAE by artist Spencer Alexander McDaniel, courtesy Wikimedia Commons.

A blood-drenched woman walks on stage joyfully bragging about the young mountain lion she has ripped apart with her bare hands. But the severed head she holds up as a trophy is human. The audience and those on stage kno what she has yet to understand – in an ecstatic, sexual frenzy, she has murdered her own son.

This is the climactic conclusion of The Bacchae, Euripides’ strangest and most enduring play. It’s royally fucked up. The prudish, proud King Pentheus works to squelch the emerging Dionysian cult with its female-only mountain festivals where wine and honey spring from the ground, women breastfeed wild wolves, violent raptures erupt, and when it’s time to wash away the blood, “Snakes came and licked the last drops clean away from their bright cheeks.”*

Like The Shining or Us or anything at all by David Lynch, The Bacchae doesn’t always make sense. You feel maybe there’s something you’re not quite getting. You return to its weirdness, lean in close, hoping to catch the whispered secret, the strange dream-truth hiding in the story.

The heart of The Bacchae is a hidden god. Dionysus himself, disguised as a mortal, orchestrates the whole bloody plot, seducing and bewildering enemies and worshippers alike. To what end? He wants the people of Thebes to see the god in front of their face.

“He will recognize the true god, Dionysus, son of Zeus,

most dreadful and most gentle to mankind.”

I think I see horns growing from your head.

You’ve changed into a bull – or were always.”

The god leads the way to the hidden gathering where the king is discovered by the manic, tripping women – including his own mother. The scene is pure horror. The young king calls out, “Mother, pity me. Don’t kill me, Mother.”

“They stripped his torso bare, straining their nails

with blood, then tossed the balls of flesh around.”

Just as Dionysus seduces the king, a horror film seduces us. We are drawn to watch the very thing that terrifies us, spying through closed fingers at the horror, called on by the Hidden God toward some unspeakable truth. Like Pentheus, we are ripped open. And like the doomed king, we “recognize the true god.”

It is a dangerous thing to see a god. Dionysus’ own mortal mother was burned to a crisp from a single glimpse of her lover Zeus’ true divine form. Some truths are the same. So like Perseus using his mirrorlike shield to glimpse Medusa, we use film to reflect a truth too blindingly bright to view directly.

Theater was a religious experience for the ancient Athenians, and for many of us so is a good (or even not-so-good) horror film. Sitting together in a crowded movie theater, all leaning into the mystery, all shuddering and screaming in unpracticed unison. In these moments we slide out of ourselves, no longer isolated individuals, but instead part of a collective we. We experience an all-too-easily forgotten truth – that we are connected at the deepest of levels.

What a wild, intoxicating realization that we scream in harmony and shudder with complementary rhythms, that all these strangers have an internal life as intimate, holy, and hidden as our own.

Of course, this is not the experience of every horror screening or Greek drama performance. Not every kiss is ecstatic, not every sunrise a mystical experience – but that is the goal, isn’t it?

As a filmmaker and film fan, I want to approach horror with the same kind of dancing reverence the ancient Athenians had for their theater. The understanding that these stories do more than entertain, more than shock and thrill. They awaken us to the bizarre beauty of living. They playfully explore our shared mortal terrors. And occasionally – when the lights are low and the crowd enraptured, and we cover our faces in fear – we may glimpse the Hidden God and the burning unsayable core of life.