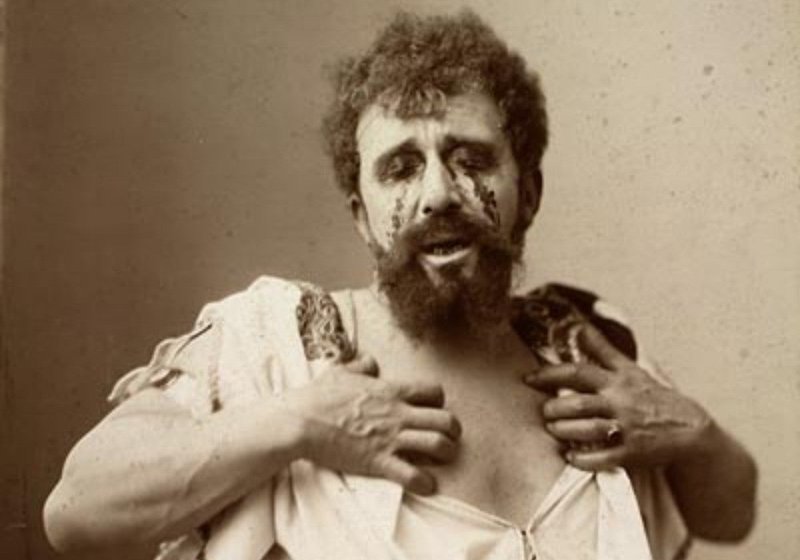 Editor's Note: We're thrilled to have author, filmmaker and performer Owen Egerton on the site over the next three weeks examining ancient Greek tragedies from 5th century BCE as the original horror "movies." You can read Part 2 here!

Only a handful of the original plays have survived since the 5th century BCE, and they are exquisite! Dark, delightful, and disturbing as hell. Dramas rich with monsters, death, and gods who play with humanity’s minds like an Olympian Freddy Krueger. I love them.

In the midst of these ancient dramas with their family curses and petty gods, you can find the DNA of modern horror. Take the most famous of the Greek Tragedies: Sophocles’ Oedipus Rex. The entire play is structured like one beautiful jumpscare.

You remember this one. Oedipus is determined to hunt down the murderer of the dead king, unaware that he himself is the killer. To make things worse, Oedipus has married the widowed queen – his own mother. Sounds like an Ari Aster rom-com, yeah?

Oedipus’ story was an old tale, an urban legend of sorts. So even before seeing the play, the original Greek audience knew the story, just as we know there's a slasher roaming the summer camp way before the counselors do. The audience watched Oedipus moving closer to the truth like a modern horror fan watches a camp counselor slowly stepping toward a dark cabin door. You can imagine them gripping their togas begging Oedipus, "Don't go in there! Don't open that door!"

Since the audience knows the actual truth (or slasher) hiding in the dark, Sophocles has to find another way to shock and thrill his audience. We’d be disappointed if our camp counselor threw open the cabin door and the slasher was standing exactly where we thought he’d be. We need to anticipate and be surprised. Or as Aristotle says, the climax must be “surprising, yet inevitable.”

In Oedipus Rex, the truth Oedipus discovers is horrible – but the real shock of the drama is his reaction. The king grabs a brooch from his wife/mother’s hanging corpse and gouges his own eyes out. This was a new twist on the old story. A fresh horror, a gross shock, an oh-my-god, check-out-the-practical-effects, give-it-a-Chainsaw-Award-and-greenlight-the-sequel moment. (By the way, there actually are two Oedipus sequels.)

“Dark, dark!” the wounded Oedipus cries. “The horror of darkness, like a shroud, wraps me and bears me on through mist and cloud.”

It’s not just gore for gore’s sake. Nor are we being taught some heavy-handed moral – Oedipus doesn’t deserve his fate any more than a post-coital Kevin Bacon deserves a knife through the neck. The point is Oedipus’ suffering is awesome and breathtaking. And this is what it is to be human. Tragedy and horror at their best demonstrate how our capacity to suffer is the core of our nobility.

This hard truth is revitalizing, enlightening and, I would even argue, wildly life-affirming.

More of that in Part Two.