The three day fest includes the UK premiere of WINNIE THE POOH: BLOOD AND HONEY. 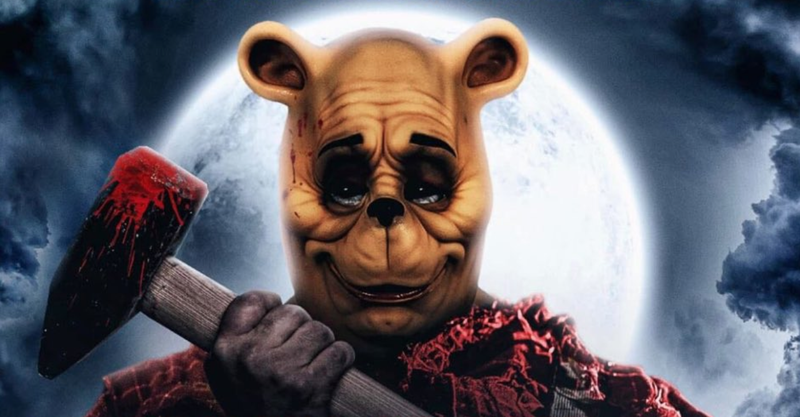 FrightFest, the UK's biggest horror and thriller film fest, returns to Scotland with a line up that's all kinds of killer. The three-day event will return as part of Glasgow Film Festival.

FrightFest has been a staple of the UK horror world since 2000, having hosted a number of national and international premieres and such iconic guests as George A. Romero, Rob Zombie, Tobe Hooper, as well as homegrown heroes like Neil Marshall and Danny Boyle. FrightFest Glasgow had its first event in 2006, and since then has been another essential date in the diary for horror fans both across the United Kingdom and overseas.

This year's line up has something for everyone, with films spanning nine countries and a huge mix of genres from sci-fi to found footage, as well as the 'very first Lithuanian slasher'. Read on to find out more about what's on the program for each day...

Smoking Causes Coughing
Director: Quentin Dupieux.
Cast: Gilles Lellouche, Vincent Lacoste, Anaïs Demoustier.
France, 2022, 80 mins.
UK PREMIERE - ​ Incredible but true, yet another quirky absurdist comedy sci-fi fantasy from visionary director Quentin Dupieux, whose Rubber caused a 2010 FrightFest Glasgow sensation. The Tobacco Force is a superhero quintet fighting evil by using cigarette cancer-causing substances as their weapon of choice. But their super rat Chief Didier has noticed friction in the team. Since there's an upcoming battle against evil conquerer Lezardin on the horizon, Didier sends them to a lake retreat for a team-building holiday where they tell each other scary campfire tales. Will they form a cohesive unit again in time for the final epic face-off?

Sisu
Director: Jalmari Helander.
Cast: Jorma Tommila, Aksel Hennie, Jack Doolan.
Finland, 2022, 91 mins.
UK PREMIERE - ​From Jalmari Helander, director of Rare Exports and Big Game), a bloody World War II action epic that pits one hard-to-kill Finn against Nazi soldiers in Lapland. After a solitary prospector strikes gold in the wilderness, he runs afoul a retreating detachment of Nazi soliders who set their sights on claiming the bounty. Unfortunately for the stormtroopers, this is no ordinary miner, but a mythic one-man army epitomizing the quintessential Finnish concept of ‘sisu’ - white-knuckled courage and unimaginable determination in the face of overwhelming odds. Let the pulverizing, shredding and spectacular gore on land, sea and air begin… 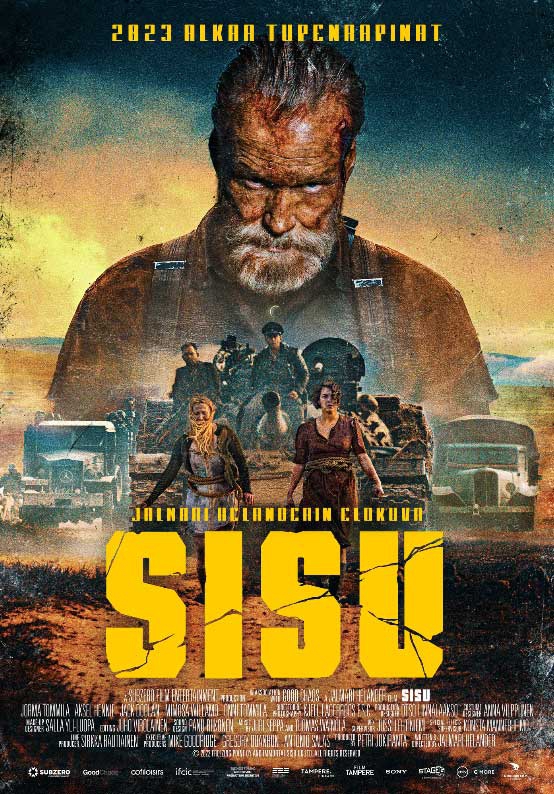 #chadgetstheaxe
Director: Travis Bible.
Cast: Michael Bonini, Spencer Harrison Levin, Taneisha Figueroa.
USA, 2022,83 mins.
INTERNATIONAL PREMIERE - ​​ Unfriended, Dashcam, Deadstream and now director Travis Bible’s Instant Found Footage comedy horror where four social media influencers must decide if Internet fame is worth the danger in real time. Bros Spicy Steve and Chad team up with a pair of beauty tip streamers to visit the supposedly haunted Devil’s Manor, former home to a Satanic Cult. Things don’t go well. Soon they’re faced to wonder if its all a prank created by other streamers, by each other, or if there is something more sinister at hand… And as the violence ramps up… so do the views and likes.

Irati
Director: Paul Urkijo Alijo.
Cast: Edurne Azkarate, Eneko Sagardoy, Itziar Ituño.
Spain, 2022, 114 mins.
UK PREMIERE - From Errementari director Paul Urkijo Alijo comes the Basque The Lord of the Rings, based on the graphic novel by J. L. Landa and J. Muñoz. Christian nobleman Eneko must fulfil the promise he made to his late father, to protect and lead his people into the new era. To do so, he must recover his father’s body, buried next to Charlemagne's treasure. However, despite his faith, he needs the help of his childhood friend, the pagan Irati. On this mythological and magical mission, the two young men venture into a strange forest where "Everything that has a name exists".

Mother Superior
Director: Marie Alice Wolfszahn.
Cast: Isabella Händler, Inga Maux, Jochen Nickel.
Austria, 2022, 71 mins.
UK PREMIERE - ​ Rosenkreuz Manor. Sigrun Fink, desperate for information about her biological family, starts a new position as nurse to the aging, ill and eccentric Baroness Heidenreich. For a shared longing binds them together: the old lady’s memory contains the secret to Sigrun's true identity; the nurse’s lifeforce holds the key to the future for the Baroness. On the path to self-discovery, Sigrun is confronted with the sinister world of folklore occultism, carried out by the Baroness and her sinister groundskeeper Otto. One opening an unearthly, pagan abyss in which every moral and principle will be tested.

Pensive
Director: Jonas Trukanas.
Cast: Šarūnas Rapolas Meiliešius, Gabija Bargailaitė, Marius Repšys.
Lithuania, 2022, 87 mins.
UK PREMIERE - ​​Get ready for the very first Lithuanian slasher. Wooden sculptures of the Pensive Christ can be found in weirdest spots all through the Baltic States. They combine folk art and Christian traditions into a singular entity concerning the fear of being judged. And that’s what is about to happen to the usually risk-averse Marius as he organises the venue for his wild high school graduation party at a remote cottage. For his drunken and drugged classmates destroy some life-size wooden statues and almost immediately a scarred, masked and mysterious killer starts picking them off one by mutilated one.

Winnie the Pooh: Blood and Honey
Director: Rhys Frake-Waterfield.
Cast: Craig David Dowsett, Chris Cordell, Natasha Tosini.
Netherlands, 2023, 90 mins.
UK PREMIERE - ​ ​ Be warned this ain’t no bedtime story! During childhood, Christopher Robin befriended Winnie the Pooh, Piglet and their friends, played games and fed them. But as he grew older, the visits stopped, leaving them increasingly hungry and desperate, eyeing Eeyore as food. Now Christopher has returned to the forest with his new wife hoping to introduce her to his old friends. But it sends Pooh and Piglet on a murderous scavenger hunt for human flesh when they antagonize a group of college girls on a rural cabin vacation. Will Christopher still get Pooh back on the right track? 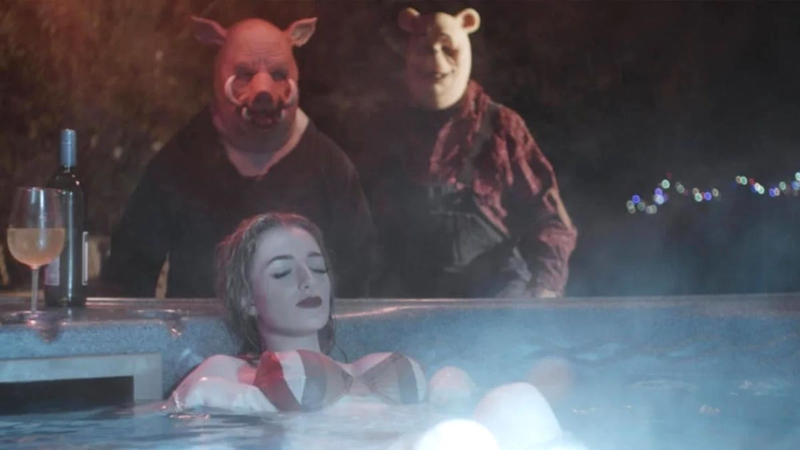 Hunt Her Kill Her
Directors: Ryan Thiessen and Greg Swinson.
Cast Natalie Terrazzino, JC Oakley III, Larry Bunton.
USA, 2022, 89 mins.
INTERNATIONAL PREMIERE - ​​​ A taut, brutally intense thriller using space and time to deliver a constant level of suspenseful violence and plenty of surprises along the breathtaking way. Karen is a desperate young mother who has just filed divorce papers on her abusive husband. Forced to take a job as the night shift janitor at a large furniture factory, she is told she will be the only one working at this time. But, after seeing a strange vehicle idling in the parking lot and finding a door to the factory ajar, Karen gets the feeling she might not be alone after all.

Onyx the Fortuitous and The Talisman of Souls
Director: Andrew Bowser.
Cast: Andrew Bowser, Jeffey Combs, Barbara Crampton.
USA, 2023, 105 mins.
INTERNATIONAL PREMIERE - ​​​Based on director Andrew Bowser’s viral character, Onyx, who has racked up 300 million plus views online and has over a million TikTok followers. Fledgling occultist Marcus J. Trillbury (Onyx) attends a black magic ritual at his idol Bartok the Great's dark mansion. But terrible things begin to happen and it soon becomes clear that Bartok’s intentions are way more nefarious. As Marcus battles to keep his soul, a question of great destiny looms. Is he doomed to remain a nobody or will he rise to defeat Bartok and save his fellow Satanist followers from damnation?

Little Bone Lodge
Director: Matthias Hoene.
Cast Joely Richardson, Neil Linpow, Sadie Soverall.
UK, 2022, 93 mins.
WORLD PREMIERE - From Matthias Hoene, director of Cockneys Vs Zombies and the producers of 47 Metres Down, a twisty thriller that will chill you to the bone. During a stormy night in the Scottish Highlands, two criminal brothers on the run seek refuge in a desolate farmhouse. But after taking the resident family captive, they find the house holds even darker secrets of its own. Colour Out Of Space star Joely Richardson plays the fearsome family matriarch who will stop at nothing to protect her kin and the shocking mysteries that surround their very existence.

Here For Blood
Director: Daniel Turres.
Cast: Shawn Roberts, Joelle Farrow, Dee Snider.
Canada, 2022, 100 mins.
INTERNATIONAL PREMIERE - ​ It’s the tongue-in-cheek, extreme splatter, campy comedy horror shocker of the year! When his girlfriend is swamped with college exams, Tom O'Bannon, a rowdy pro-wrestler struggling to make ends meet, agrees to fill in as a last-minute replacement for her well-paying babysitting job. Tom arrives at an isolated family home where he meets the precocious 10-year-old Grace. But what starts off as a quiet night of pizza and video games quickly spirals into bloody, violent, demonic chaos as Tom and Grace find themselves fighting for their lives when an otherworldly cult of masked intruders descend on the home.

13exorcisms
Director: Jacobo Martinez.
Cast Maria Romanillos, Ruth Díaz, Silma López.
Spain, 2022, 98 mins.
INTERNATIONAL PREMIERE - Inspired by recent events in Spain, relentless suspense and skin-crawling horror begins when shy, sensitive teenager Laura is tricked into taking part in a Halloween séance to contact the spirit of a mad doctor who murdered his family. From that night on, Laura's life is forever changed... Dark presences, terrifying visions, ominous voices, painful marks on her skin, and other paranormal phenomena haunt her. Laura's religious parents decide to call the local priest for advice, who claims she’s possessed. To set her free, he will have to perform a series of exorcisms - each more violent than the last.

Consecration
Director: Christopher Smith.
Cast: Jena Malone, Danny Huston, Janet Suzman.
UK, 2022, 91 mins.
INTERNATIONAL PREMIERE - ​​“There is but one God. And his Shadow...” Grace is summoned to the Mount Saviour convent deep in the Scottish Highlands following the mysterious death of her priest brother. Refusing to believe he committed suicide, and determined to discover what really happened, Grace starts her own investigation as the nuns prepare a consecration ceremony to purify the holy site. Soon she inadvertently shines a light on murder, sacrilege and a disturbing truth, relating to the forgotten years of her own childhood, intertwined with that of the convent’s holy order and the secret it’s charged with protecting. 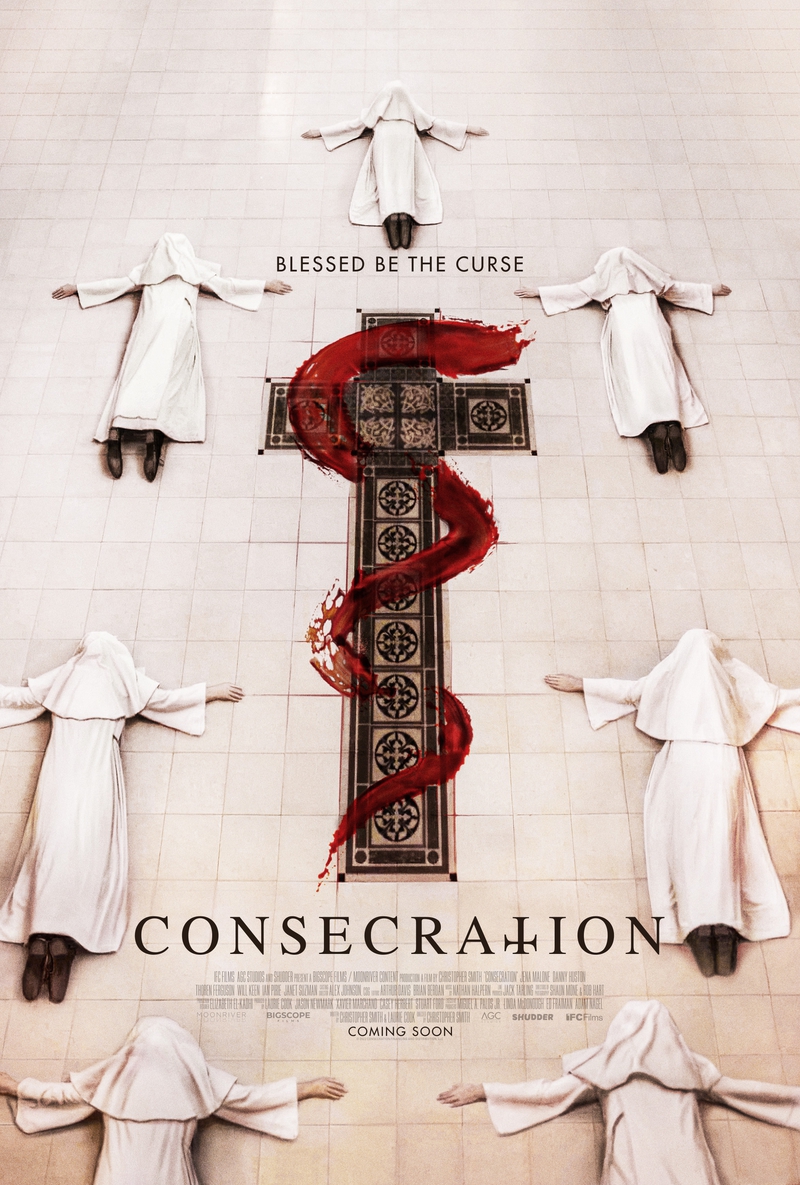 Tickets for FrightFest Glasgow go on sale on Wednesday, January 18 at 12pm, so set your alarm and head to the official FrightFest website for more info on how to book.