Exclusive Interview With Writer/Director Mike Mort On His Over-The-Top, Animated CHUCK STEEL: NIGHT OF THE TRAMPIRES 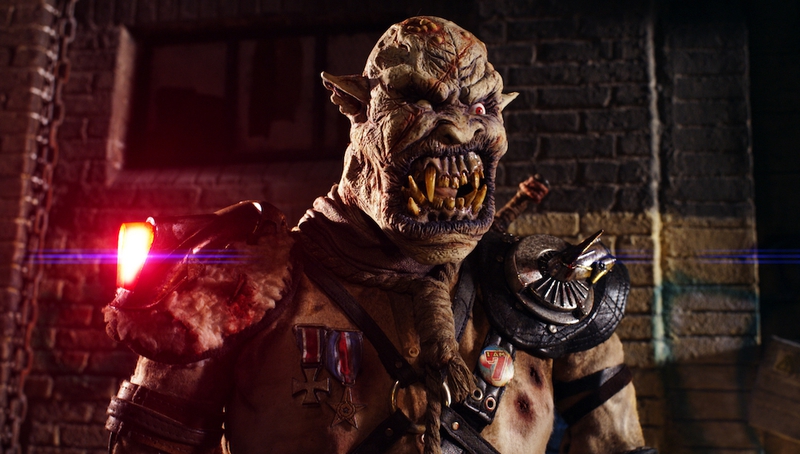 It’s been nearly four years since Chuck Steel: Night of the Trampires blazed its way across the international festival scene, but British filmmaker Mike Mort’s outrageous homage to ’80s genre fare is finally in general release on digital platforms, including Amazon, iTunes, YouTube, Google Play, etc. It’s the puppet-animation saga of the titular hero—a renegade, violent, not-very-bright cop in 1986 LA with a gargantuan chip on his shoulder—taking on an invasion of alcohol-fueled vampire/vagrant hybrids. Awash in blood and other bodily fluids, bad attitudes and political incorrectness, it crossbreeds the Lethal Weapon/Cobra genre with early Sam Raimi/Stuart Gordon-esque horror, all done in the stop-motion style of Wallace and Gromit creators Aardman Animation (where Mort did a stint in the 2000s).

Mort began sketching Chuck Steel as a teenager, and first brought him to the screen in homemade Super-8 and 16mm films. The character’s coming-out to the world occurred in the 2013 short Raging Balls of Steel Justice, made with a tiny crew; for Night of the Trampires, Mort oversaw up to 27 units animating big-scale action and mayhem. Here, Mort (who also discusses Night of the Trampires in FANGORIA #10) gets into the creation of his cop-on-the-edge and taking puppet animation into decidedly adult areas.

At what age did you first discover the films that would inspire Chuck Steel and Night of the Trampires?

My father started taking me to the cinema to see Ray Harryhausen movies and that sort of thing when I was probably 10 or 11. I was never into horror films when I was very young; I was terrified of them for a long time. But I loved Harryhausen’s creature effects, and thought it was amazing how those were done. When I found out that I could get a Super-8 camera that had single-frame photography, I started experimenting over a number of years. I only really got into horror when I saw Evil Dead II, which was a perfect amalgamation of horror and comedy. I started absorbing a lot of horror films after that, trying to see if there was anything as good as that out there—and there never was, really [laughs]!

Chuck Steel himself was an amalgamation of all the heroes of ’80s action films. I sometimes get, “Oh, he’s a bit like Johnny Bravo,” but I came up with him about ten years before that, so my conscience is clear!

Some people have compared him to Duke Nukem, so was that ever an inspiration?

I only discovered Duke Nukem after I’d done a lot of Chuck stuff. I can see the similarities, but at the time, you could see those traits in a lot of characters—the wisecracking, dumb hero has been done a lot. I’m not saying that Chuck Steel is the most original character, but the execution of the film and the story was where I was most concerned in terms of creating something that felt new. 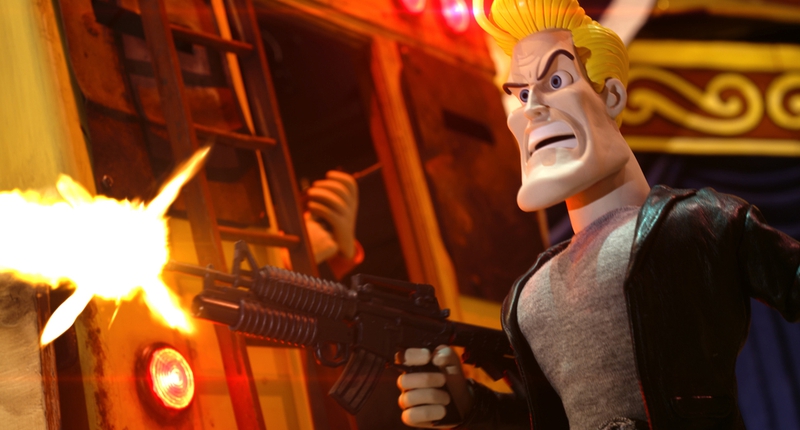 What led to Chuck Steel’s debut in the Raging Balls of Steel Justice short?

I was struggling to get anywhere with the Chuck Steel character. I actually wrote the Trampires script in 2001, tried to raise the financing for a number of years, and went down lots of blind alleys. I finally just put it on a shelf because I was disillusioned and thought it was never going to get made, and then I tried to get into live-action horror films. I made a short called Deadly Tantrum that went into a number of fests, and then I wrote a feature version that nearly got made with Doug Bradley from Hellraiser starring, but the financing fell apart at the last minute. Because of that, I got doubly jaded with everything and thought, “Aw, to hell with it, I’m just going to make another Chuck Steel film in my basement, and do it myself and not worry about financing.” I had a lot of armatures and bits and pieces I’d collected over the years, so I cannibalized those and built a lot of models, and started creating a set.

Around that time, I got introduced to my now business partners in Animortal Studio, and they bankrolled the short. It took 18 months to shoot, in my basement with a crew that fluctuated—it was sometimes two people, occasionally up to six—and it went into a few festivals. The Trampires screenplay already existed, and my backers were saying, “Let’s make a feature film,” and I said, “Well, I’ve got a script, but I don’t think we should do it, because it’s too big, there are too many characters, we’re not going to be able to do it for a low budget.” But they read it and said, “Let’s try and make it,” so we just went for it. 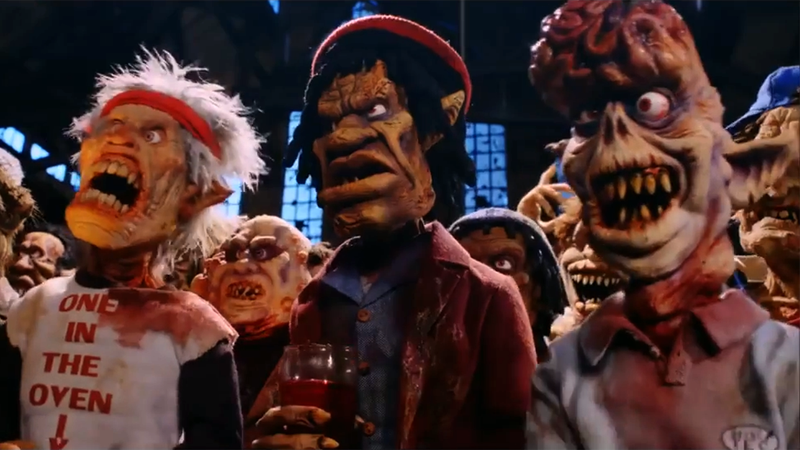 Did you go back and update the Trampires script at all before putting it into production?

I did quite a bit of work on it. I didn’t do a full rewrite, I just updated things that were no longer making sense. Originally there wasn’t a strong female character, and the villain was male, so I turned that into a female character, which sort of opened up a different layer to the script.

After previously being responsible for all the animation yourself, how did you handle overseeing the multiple units you employed on Trampires?

I was fine with that; I was happy to sort of step away from the animation side. I still did character and creature designs, and I kept my hand in on the sculpting because I enjoy that part of it; I love making monsters. But just supervising was fun, though it was kind of exhausting because it was basically running around the studio all day, every day, setting up shots and things.

You brought some of your Aardman teammates, like cinematographer Laura Howie and production designer Phil Lewis, onto this project. Did they find it liberating to work on a more outrageous and adult project than they were used to?

Yeah, I think if you speak to most of them, they all enjoyed doing something that was just blood and guts and craziness because it is very freeing to do that sort of stuff. They all worked very hard on it, and it was quite an intense job, but they’ve all been asking, “When’s the next one happening?” so we must have done something right!

The opening car chase is pretty spectacular, so can you talk about staging a big action scene in a puppet-animation film?

It’s mainly about the amount of shots you have to do. I believe on Trampires, we’ve got approximately 1,000 more shots than in most stop-motion films, because we wanted it to feel very live-action in its cutting. We’d shoot hundreds of feet of footage, and were able to just cut in and out of it. It was all choreographed and planned out in terms of the storyboards. The specific challenges of the car chase just had to do with the scale. We used actual toy cars because to build all those at a particular scale would have been too expensive. We did manage to put lights in them all, and batteries in the back so that the lights would work. 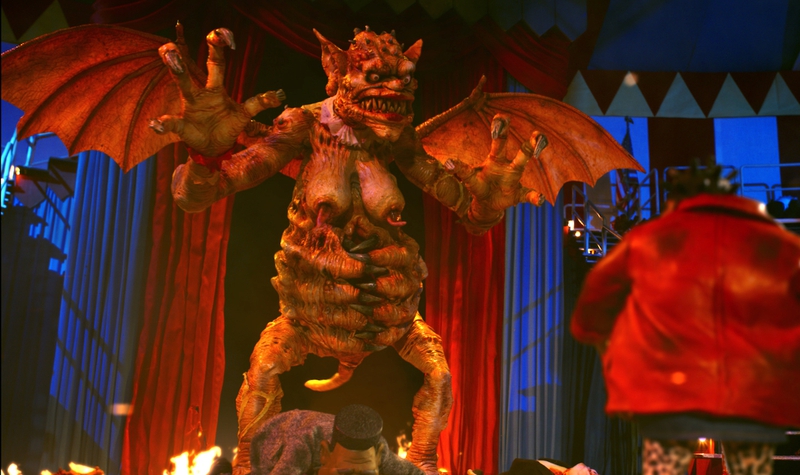 I also love the giant-monster fight; what were the inspirations behind that?

Well, I wanted to stage a battle of creatures, and do things like early transformation effects with things pushing through the skin and stretching and all that stuff. It was mimicking the things I loved in ’80s live-action movies. Part of one of the creatures is a bit like The Thing, where the belly opens up and so forth, and the tentacles coming out is probably a throwback to my love of From Beyond, which I believe I saw fairly soon after Evil Dead II, and that had an effect. I was a fan of those crazy rubber monster movies you got in the ’80s, and that was the look I was going for.

Chuck Steel: Night of the Trampires is now streaming, click below to rent: