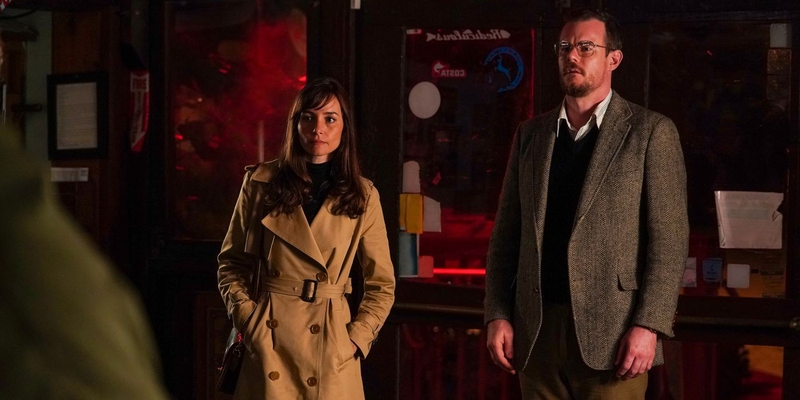 Shooting a movie on and around the beaches of Florida might sound like a sunny proposition, but that’s not how it was for Jocelin Donahue and Joe Swanberg while making Offseason. Coming to select theaters and VOD/digital platforms this Friday, March 11, the latest feature by indie horror auteur Mickey Keating (Darling, Carnage Park, Psychopaths) shows you what a Sunshine State resort town looks like in the gloom of winter, with no tourists or much of anyone else around. Still, the two actors have only positive memories of the independent production.

Donahue (The House of the Devil, Doctor Sleep) plays Marie, who travels to the isolated island in response to a message that her mother’s grave has been vandalized. Swanberg (You’re Next, The Sacrament) is her boyfriend George, who becomes increasingly upset as the couple become stranded in the desolate area, and secrets about Marie’s background come to light. As day becomes night, Marie becomes isolated, making her way through an increasingly frightening and threatening environment and a number of truly eerie scenes. Amidst strikingly scary landscapes, the two leads give Offseason its emotional center.

Could you each talk about your characters and the process of bringing them to life?

JOCELIN DONAHUE: A lot of the character development came about through conversations with Mickey, because there wasn’t too much of Marie’s backstory in the script. I mean, we know about her mom, we know what she’s dealing with right now, but we don’t really know too much about her and George’s relationship. It was fun to work that out, add those layers of tension that already existed, and explore how much more difficult it is to encounter something so scary and emotional when you’re with someone, and it’s already uncomfortable. There’s already conflict, so it’s just another thing that Marie has to deal with on this night. It’s an interesting story because you just sort of drop in on this very intense experience, and this world that Marie doesn’t understand, that she’s learning about as the audience is too. It’s almost a first-person point-of-view thing, where she’s learning the rules of this weird world and this strange mythology at the same time as the viewer.

JOE SWANBERG: I really like this guy, George. In some ways, he’s this passive puppy dog who gets dragged along on this trip, but I love his evolution, up to the point where he essentially has this very outward conflict with Marie and gets legitimately angry as secrets are revealed. I especially loved what Mickey was talking about: this two-day car trip they’ve been on from New York down to Florida before we even meet them. When we pick up with them, the amount that they haven’t talked about, that we get to see them discuss over the first twenty minutes of the movie, is exciting to me, culminating in George being like, “You’re just telling me this now?” Like, “How long have we been in the car together? Why am I just hearing this?” It was a great arc; I loved jumping into this situation.

How was it shooting in those scarily picturesque areas of Florida?

SWANBERG: I moved to Rockledge, Florida in the middle of eighth grade, and that’s pretty near where we shot. So I kind of knew that area and really liked it. I enjoyed living there, made a lot of great friends and had good associations with it. And immediately upon arriving during the offseason, in the relatively touristy part of Florida where we filmed, I loved how quiet it was. I went for long night walks along the beach, and the atmosphere was spooky and cool, so it was a really enjoyable shoot for me. It was interesting, familiar terrain, but also, there were a lot of areas I’d never been to, and the night shoots in these places were actually quite creepy. It’s always fun when you don’t have to fake it, when you shoot in an existing place, and it brings this almost organic spookiness to the film.

DONAHUE: One of the cool things was the juxtaposition of the Apollo National Seashore we shot on, this amazing, sunny, beautiful, natural, organic environment, and then this cold, industrial area around the bridge, and I got to have my Inception moments [laughs]. We filmed in the charming little town of New Smyrna, which has a historic 1940s downtown that we had the run of. The sense of place in Offseason is so strong, and that’s a testament to Mickey. He knew what he was going to do, and he knew the place so well, so it was fun to take it over and make a movie there.

How was your collaboration with Keating in general?

DONAHUE: Mickey is a wonderful director to work with; he’s so knowledgeable and passionate, and open to everybody’s ideas, whatever department, including mine. We had a lot of super-emotional scenes, but outside the frame, the set was a warm environment; I just felt supported. And Melora Walters [playing Marie’s mom in flashbacks] is absolutely a pro and so good at what she does, and such a wonderful person. It was a wonderful creative experience. 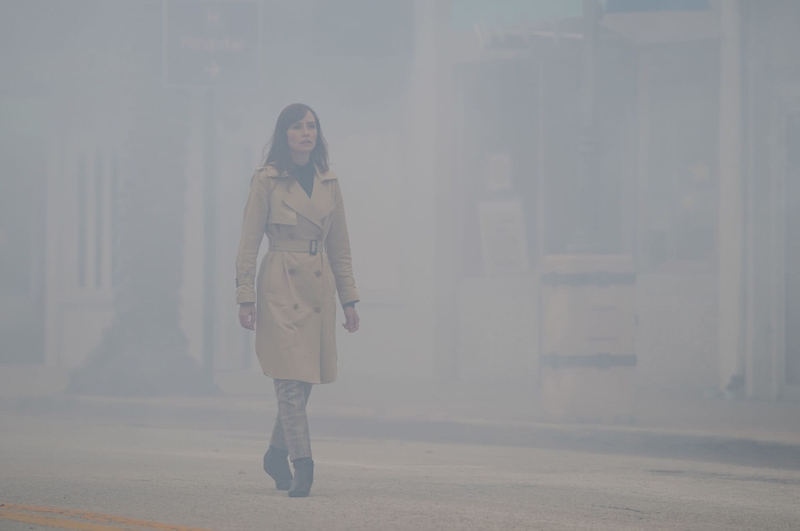 SWANBERG: Offseason was a really nice mix of technical acting and meaty scene work. I feel like a lot of films lean more heavily toward one direction or another, but Jocelin and I got to have a lot of totally emotional, character-driven moments, and then there were also all these extremely visual scenes, with huge, wide shots, all this stuff along the beach with precise timing and the fog coming in and all that. We got to have the best of both of those.

DONAHUE: Something I’d like to add to that is that we got to do all these very cool oners, so figuring out the choreography of those scenes was like a dance, with the whole crew and the camera department. That was exciting to work on.

Jocelin, this is a similar situation to The House of the Devil, where it’s just you on camera for long stretches of time. How did the two experiences compare?

DONAHUE: The difference was in the environment and the setting, and being outdoors and dealing with the fog and moving through a world that’s so much more expansive than being in a house and creeping around and being isolated in that way. It’s interesting because Marie is also super-isolated, she’s alone in this town, and she’s being watched by all the townspeople. So there are definitely similar vibes of being alone and trying to navigate survival, but the sense of danger and the monsters are definitely different in this film. 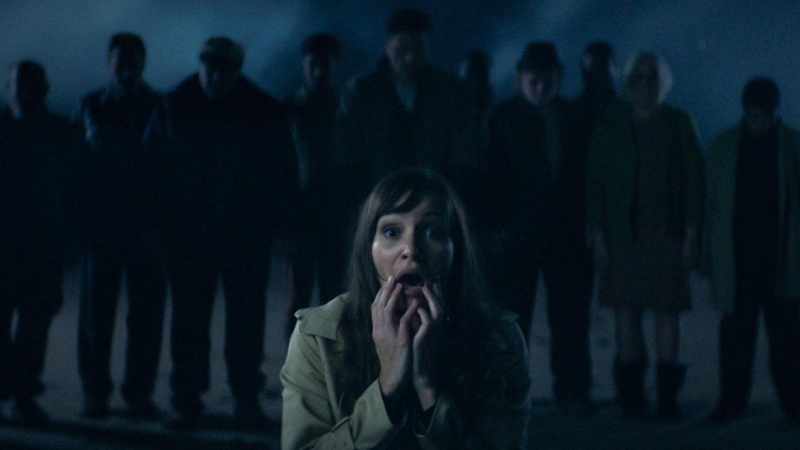 One particularly impressive scene takes place in the Sand Trap bar, where everyone is frozen in place. How was it making your way through that?

DONAHUE: It was so fun. It was just like, mind blown—what am I looking at? She’s already been through so much, and she’s desperate to find some help, and the one place she goes where there are people…that’s what’s there. It was definitely a scary and trippy, visual scene.

SWANBERG: I want to give special props to the wardrobe team. I think I have the coolest outfit here that I’ve ever been able to wear in a movie, so I want them to get a shout-out. I loved putting on those clothes, I just love the whole vibe, and I thought Jocelin looked amazing too. Together, we’re out of time in such a cool way. They did an incredible job.

DONAHUE: Same, yeah; Joanna [David] and Cara [Seo] were amazing. We had a great wardrobe department. In fact, shout-out to every department, including camera. Mac [Fisken], our cinematographer, is so talented, and his whole team was great, and there are so many beautiful shots in this movie that are just stunning.