From AUDITION to zombie metafiction. Wired women, vengeful spirits and other transmissions. 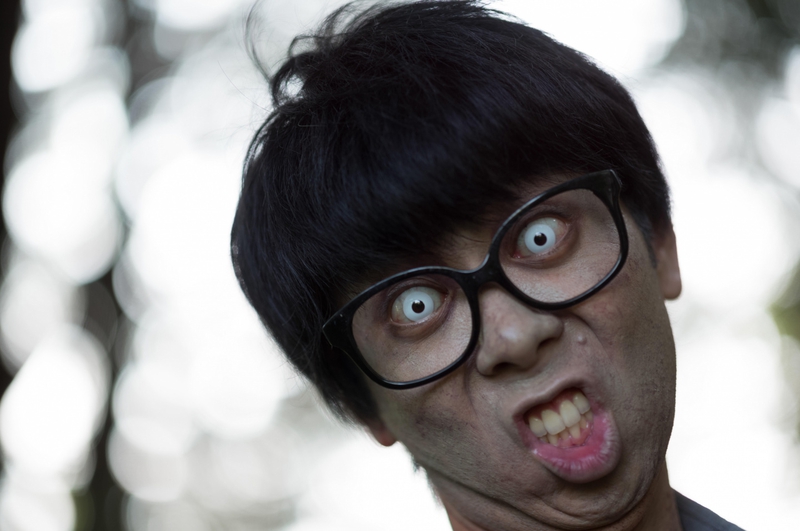 Japan: an intoxicating mix of ancient traditions and hi-tech innovations that have birthed new demons and reshaped the old. Haunted (digital) domains capture ghosts in the machine caught somewhere between the birth of the Internet and the death of analog.

In the West, these “strange apparitions” are mostly what we have associated with “J-Horror”; a term coined by British distribution label Tartan Video as part of their Asia Extreme collection in the late ’90s. What began as a short run of films that ushered out one century of cinema and helped give birth to a new has now become more ubiquitous. As it should be, this is horror made in Japan. Folklore turned Modern fables with their own extreme set of twists… 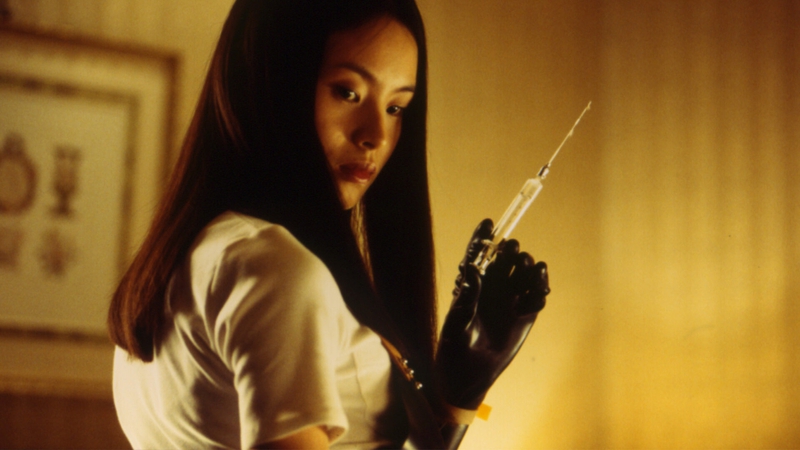 Audition (film) Japan: Ōdishon (1999). Lonely hearts, men in sacks, pinned eyeballs, and garrotted ankles in this darkest of romances from Takashi Miike. The gradual unease that builds throughout makes for an unbearable and unforgettable Japanese nightmare. Trust me, you’ll need a cuddle after.

Berserk (anime TV series) Japan: Kenpū Denki Berserk (1997). This striking and resourceful animated series is the perfect marriage of George R.R. Martin and Clive Barker. The original TV series is a masterstroke in character arcs and storytelling before descending into sheer depravity. Such hellish depictions were remade in Berserk: The Golden Age Arc III - The Advent (2013), holding up as genuinely some of the most horrific animated scenes of all time.

Carved: The Slit-Mouthed Woman (film) Japan: Kuchisake-onna (2007). Based on the Japanese urban legend, this low-budget “slice” of Asia extreme from director Kōji Shiraishi delivers on its “malevolent” spirit. Part possession movie, part slasher; the central themes of child abuse are where the real horror lies. 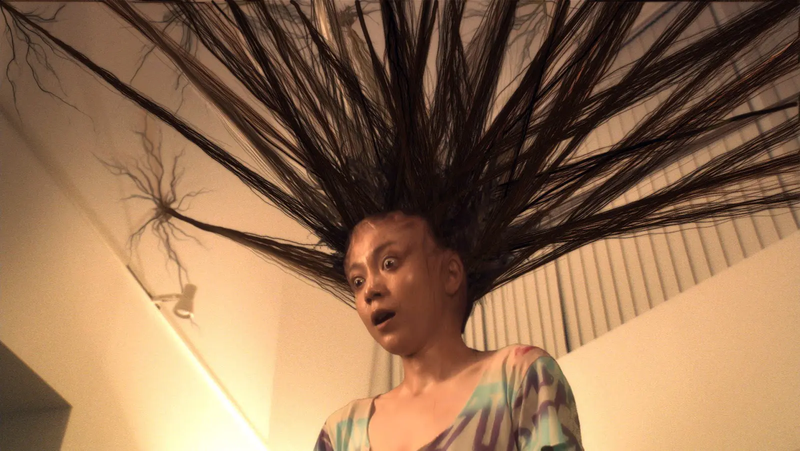 Exte (film) Japan: Ekusute (2007). Written and directed by Sion Sono, the DNA of Japanese ghosts (yūrei) is all over the screen. The first segment of Kwaidan (1964), “The Black Hair” is a huge influence. Adapted from “The Reconciliation” from Lafcadio Hearn’s collection, Shadowings (1900), it tells the story of a swordsman attacked by his ex-wife’s black hair. In turn, Justin Simien’s Bad Hair (2020) is practically a remake of Exte. The title is slang for hair “extension” and plays as a direct comment on Japanese women’s “insane” obsession with their hair, in which they are meticulous to the point of madness.

Folklore (Japan: Minkan denshō, transl. “transmissions among the folk”). Interest in the fantastic and horrific creatures that populate Japanese folklore still resides in modern horror. The monstrous stories (and imagery) are unforgettable; these mukashi-banashi (tales of “long ago”) were invented and spun by writers during the Edo Period (and earlier) in ghost stories known as “Kaidan”.

Gyo: The Death-Stench Creeps (manga) Japan: Gyo Ugomeku Bukimi (2001-2002). Junji Ito’s coastal horror is so toxic and visceral in its art and storytelling; you can practically smell the rot. Attached to cybernetics, the horde of undead fish crawl onto the land carrying their deadly stench; these sickening “walking machines” remnants of the Japanese army’s WWII biological warfare. Essentially, this is Ito’s Jaws… meets Hardware. 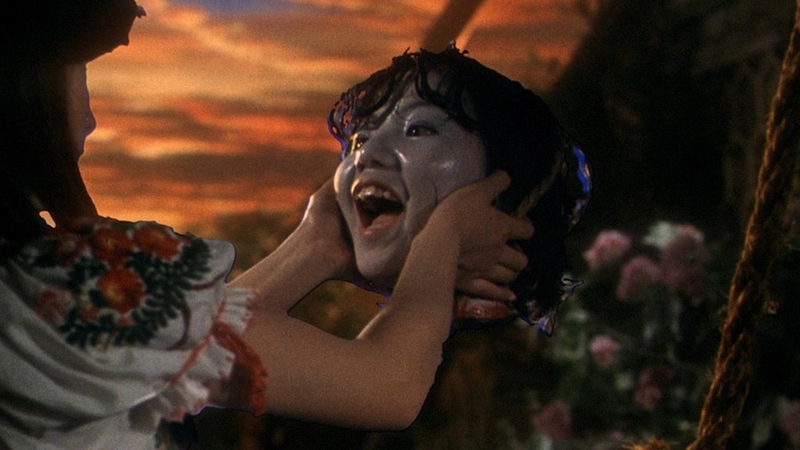 House (film) Japan: Hausu (1977). Nobuhiko Obayashi’s surreal and psychedelic horror-comedy is an odd mix of innocent lunacy and horrific chaos. Initially consulting his young daughter Chigumi (who received story credit) during early development, the film’s fountain of blood demonstrates a (weirdly) childish view of the world; its amateurism is only heightened (and juxtaposed) by the stunning cinematography, insane effects, and set pieces.

Ito, Junji (horror mangaka) Japanese: Itō Junji (born: 1963). A true master of the medium, Ito’s storytelling is the perfect hybrid of gothic, Lovecraftian, and traditional Japanese horror. Uzumaki (1998-1999), released as a film in 2000, is his benchmark work that crafts a series of stories all centered on the nightmarish effects of spiral imagery. Although the adaptation falls flat, the original manga remains one of the most unique examples of horror fiction out there and the perfect introduction to his work.

Jigoku (film) transl. “Hell”, aka The Sinners of Hell (1960). Director Nobuo Nakagawa ― the father of Japanese horror cinema ― delivered what is considered to be his most innovative film. Shocking in its use of graphic and tormented imagery, it was a direct contrast to other Japanese horror films of the era ― Kwaidan (1964), Onibaba (1964), and Kuroneko (1968) ― without losing any poetry or potency.

Kwaidan (anthology film) Japan, Hepburn: Kaidan, transl. “Ghost Stories” (1964). Although it premiered at the Yūrakuza Theater on December 29, 1964, the general release (in Japan) began on February 27, 1965. A masterpiece of Japanese cinema and portmanteau horror, Masaki Kobayashi’s film boasts some of the most striking set pieces and cinematography committed to celluloid. Kobayashi’s horror segments are based mainly on stories from the collection of Japanese folk tales, Kwaidan: Stories and Studies of Strange Things (1904) by Lafcadio Hearn…

Lafcadio Hearn (author, translator, and teacher) American-Japanese: aka Koizumi Yakumo (born: 1850, died: 1904). Greek-born and Irish-raised, Hearn became one of America’s most well-known writers, eventually becoming the beloved cultural icon Koizumi Yakumo in 1896, just as Japan transitioned from an ancient feudal society into an industrial power. Known primarily for introducing Japanese culture and literature to the West, his collections of legends and folklore help further define him as the “master of yōkai stories”. 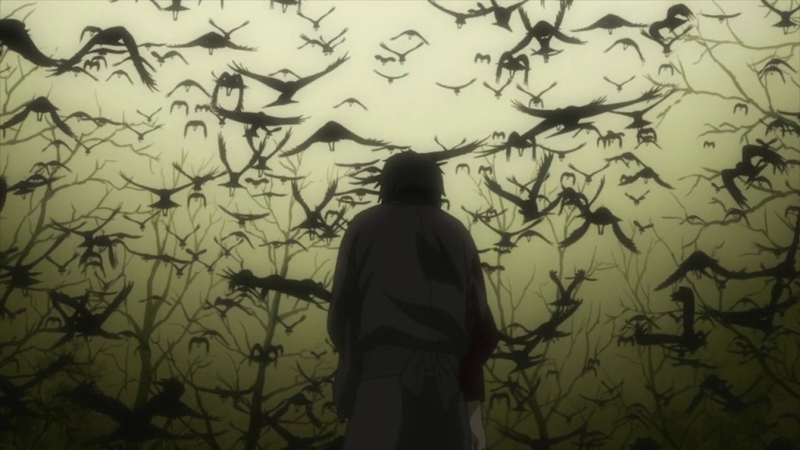 Mushi-shi (anime TV series) Japan: transl. “Master of Insects” (2005-2006). Primordial life forms known as “mushi” (insects) inhabit both the physical and spiritual world ― “life in its purest form” ― as we witness subtle inflictions and the larger influences on nature, the land, and those who find a home there. The horror on display here is both subtle and quiet, as is its storytelling.

Noroi: The Curse (film) Japan: Noroi (2005). Found footage film directed and co-written by Kōji Shiraishi. Presented as an incomplete documentary by an independent journalist specializing in the supernatural; from the offset it warns: “This video documentary is deemed too disturbing for public viewing” and Shiraishi’s faux film certainly lives up to it.

Pulse (film) Japan: Kairo (2001). This “techno-horror”, written and directed by Kiyoshi Kurosawa, blurs the boundaries between the physical, spiritual and digital worlds as restless spirits reveal themselves through the Internet. Kurosawa is in urban legend territory; the Red Room Curse hinted at in the haunted spaces of “Forbidden Rooms” marked by red tape. These “Yahoo yūrei” bait their victims with pop-ups before they reveal themselves in unique and twisted motions. 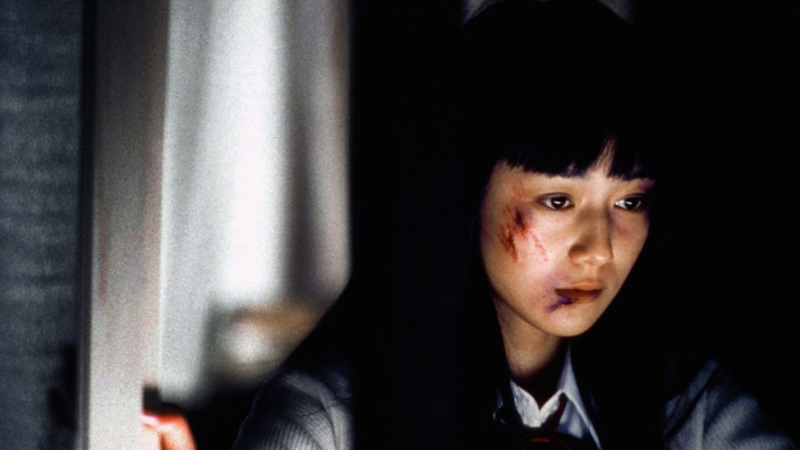 Ｑ, Bijitā Kyū (Japan: aka Visitor Q) film (2001). As a contribution to the Love Cinema series ― made up of six low-budget straight-to-video releases by independent filmmakers ― Q provides part of an experimental project exploring the cost-effectiveness of Digital Video. Provocative (as would be expected from director Takashi Miike), the horror lies in the most taboo subject matter as it plays on themes of sexual repression and the destruction of family values.

Ring (film) Japan: Ringu (1998). A great deal of credit should go to producer Takashige Ichise, for whom there would be no Ring and Ju-On franchises or Dark Water (2002). As seminal J-Horror, Hideo Nakata’s adaptation of Koji Suzuki’s 1991 novel ― the first in the Ring trilogy ― once again taps into (and reinvents) Kaidan and the yūrei as a modern parable. Nakada drew heavily from Tōkaidō Yotsuya Kaidan (The Ghost of Yotsuya, 1959) ― with Suzuki’s original plot borrowing elements from other Kaidan. A major detail can be seen within Banchō Sarayashiki, (“The Dish Mansion at Banchō”) ― first appearing as bunraku in 1741 ― in which the “puppet play” told the story of a samurai’s servant (and mistress), Okiku, who is murdered and thrown into a well, manifesting as another vengeful “grudge-type” spirit. 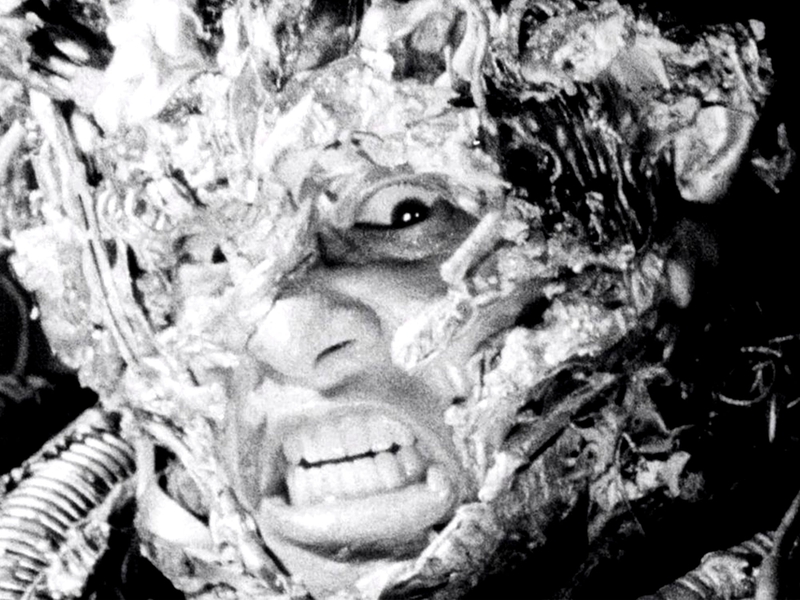 Tetsuo: The Iron Man (film) Japan: Tetsuo (1989). Written, produced, edited, and directed by Shinya Tsukamoto; this is as far away from the MCU as you will find. Imagine if the Davids Lynch and Cronenberg collaborated on a cyberpunk movie with a tiny budget but with a “huge” drilling “appendage .”Utterly insane.

Ugetsu (film) Japan: aka Tales of Ugetsu (1953). As both Kaidan and jidaigeki (“period drama”), this top-tier slice of cinema is based on Ueda Akinari’s supernatural collection of tales from 1776. Director Kenji Mizoguchi was, by critics and his contemporaries, lauded as one of the greatest Japanese filmmakers and placed on the same pedestal as Dreyer, Lang, Welles, Renoir, Hitchcock, and Kurosawa.

Versus (film) Japan: Vāsasu (2000). This independent film ― co-written, produced, and directed by Ryuhei Kitamura ― is a relentless assault on the senses. Smashing genres together as much as it smashes heads. If you love early Raimi and blood-soaked violence of the ’90s, then this is your zombie come gangster come martial arts movie… with a dash of slapstick thrown in for good measure.

Wild Zero (film) Japan, Hepburn: Wairudo Zero (1999). Filmed in Thailand and directed by Tetsuro Takeuchi, this zombie movie sees (the actual) Japanese garage rock power trio, Guitar Wolf, at the center of the action. What follows is an oddly sincere feel-good cult movie that blends punk, zombie action, and transgender sensibilities with absolute relish. “Love has no borders, nationalities, or genders! DO IT!” 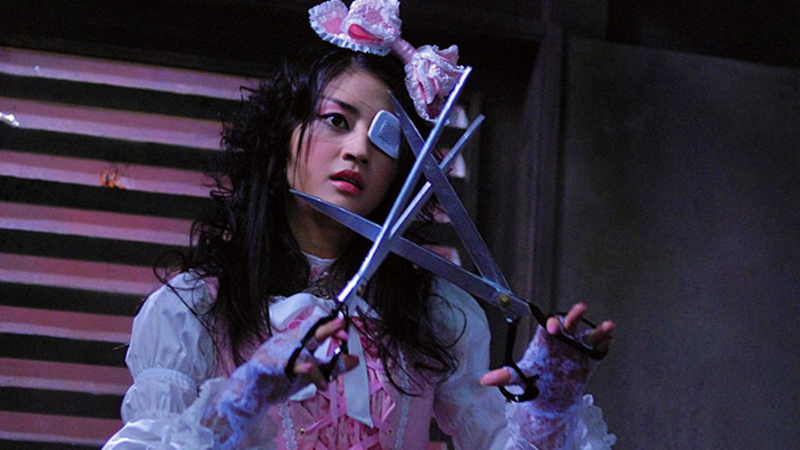 X-Cross (film) Japan: XX, Hepburn: [ekusu kurosu]: makyô densetsu (2007). Pronounced “criss-cross,” director Kenta Fukasaku’s (insane) bastard child of The Wicker Man, Friday the 13th, and Rashomon is an inventive blast of J-Horror. Based on the novel by Nobuyuki Joko, the film rewinds and “criss-crosses” with flashbacks as Fukasaku infuses the J-pop flashiness of his previous effort, Yo-Yo Girl Cop (2006).

Yūrei (film) Japan: transl. “faint spirit” (ghost). There are many Japanese ghosts placed in numerous categories and subcategories. So far, the most well-known touched upon are those dressed in a white (burial) kimono, their pale features hidden under ragged raven-colored hair. These are less “sinful” ghosts, disconnected from any concept of the (Judeo-Christian) afterlife. Instead, they are forged by how much they are bound to the living and, therefore, their humanity. Any “grudge” they hold, their vengeance ― as more than evidenced by now ― a characteristic most prevalent in J-Horror. In the original version of Yotsuya Kaidan ― first written and performed as a kabuki play in 1825 ― the yūrei, Oiwa, is an onryō; the archetypal “vengeful spirit .”Other “strange apparitions” known as yōkai differ from not being bound to a single person or location, roaming the land freely. 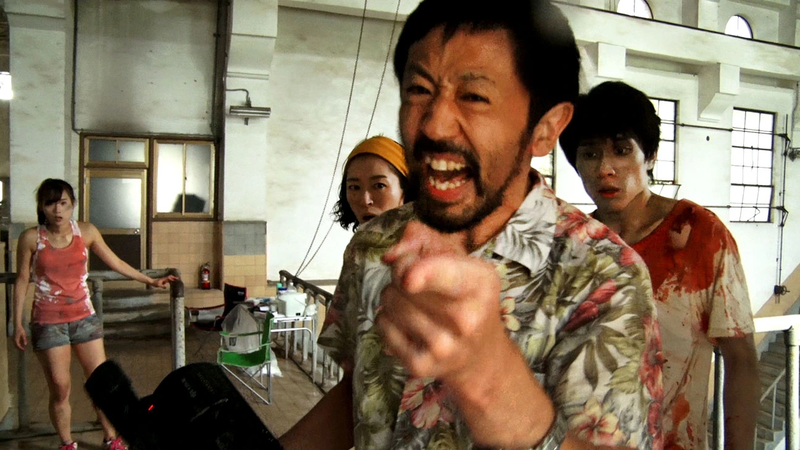 Zombie metafiction (sub, subgenre) Japan, Hepburn [a way to write Japanese using the roman alphabet]: zonbi metafikushon. When it comes to reanimated corpses, Shinichirou Ueda’s One Cut of the Dead (2017) is one of the most original zombie movies so far this century. The first third may test your patience, but the payoff (without spoiling too much) is hugely rewarding as we descend a rabbit hole of the undead. A “cut” above the rest, Ueda’s sense of humor perfectly marries horror and comedy in the best example since Shaun of the Dead (2004). Rom-zom-com? Try meta-rom-zom-com.